Sometimes you're the windshield...Eagles 32, Houston 30 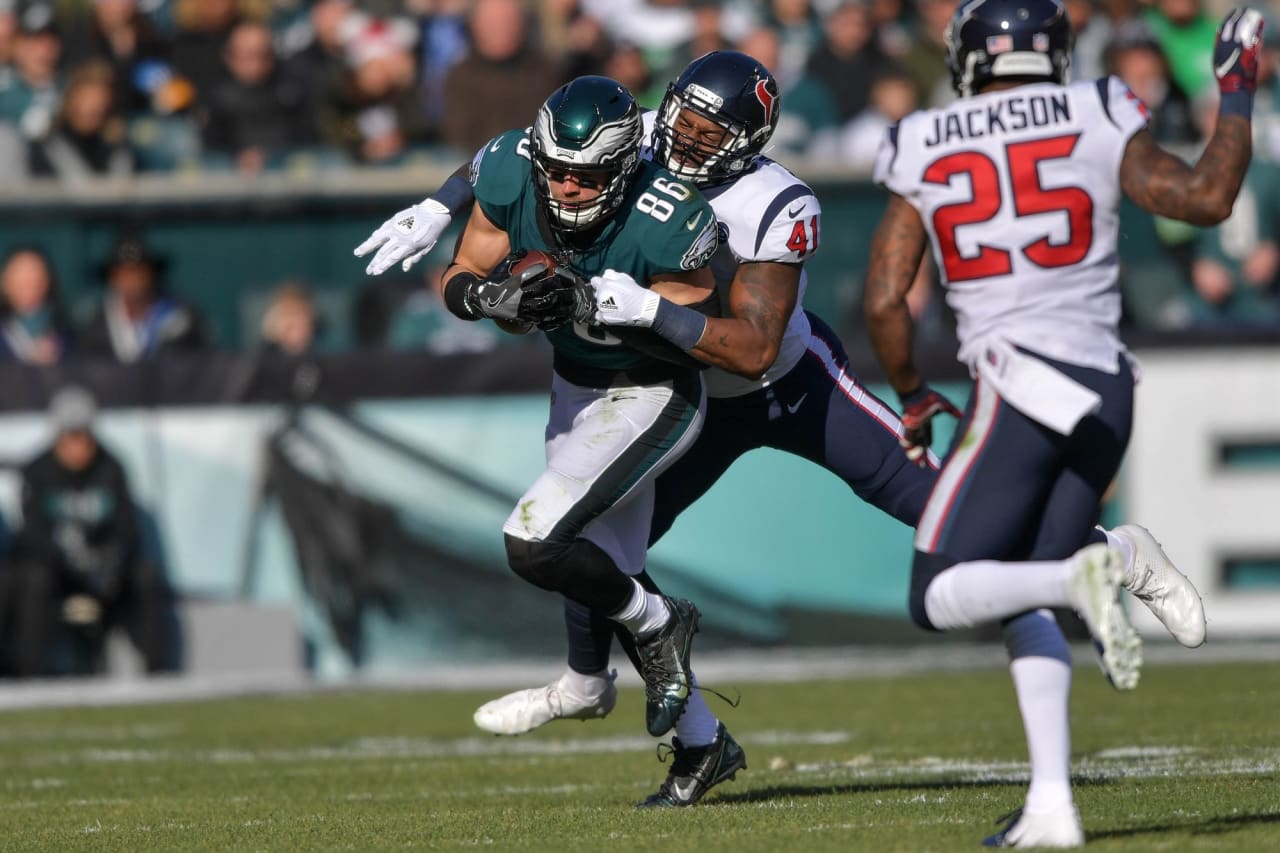 Sometimes you're the windshield...Eagles 32, Houston 30

EYE told you this one would be decided by one major goof by either team. Near the end, it looked like the goof was ours. Josh (Josk) Adams surrendered a fumble on a conservative play designed to run clock and protect the Eagles’ two-score lead and essentially ice the game with five minutes left. Of course this is the guy I had nominated earlier as the Sultan of Security. It was the first fumble in 10 games for Josk. Naturally it was the opening Deshaun Watson (who is really really impressive as a mobile quarterback) needed to bring the Texans back to take the lead by one point with just under two minutes to go.

But then there was an even bigger goof by Houston. The Eagles offense was backed up deep on third down when Jadeveon Clowney lowered his helmet at the last millisecond on a full-frontal sack of Nick Foles. The call was subtle but one of the few calls made correctly by a most uncertain officiating crew. It gave the Birds new life when it looked like curtains.

That’s the way the playoff cookie crumbles. It’s all we got left now.

The Texans (10-5) missed an opportunity to clinch the AFC South and also allowed New England (10-5) to take control of the No. 2 seed. The Texans would secure the division title with a victory against Jacksonville next week. They’d get a first-round bye with a win and if the Patriots lose or tie.

Filling in for the injured Carson Wentz for the second straight week, Nick Foles again played like the Super Bowl MVP who led Philadelphia to a victory over New England last February.

Foles threw for a franchise-record 471 yards and four touchdowns.

Watson threw a 35-yard touchdown pass to Vyncint Smith with 2:04 remaining as Houston rallied from a 13-point deficit.

But Foles brought Philadelphia back into position for the win.

Foles was injured (wind knocked out of lungs) on that hit by Jadeveon Clowney while completing a 19-yard pass to Alshon Jeffery to the Texans 30 on third-and-10. Nate Sudfeld came in and threw an incomplete pass, but the tougher-than-he-looks Foles returned on the next play. His 20-yard pass to Zach Ertz on third-and-10 put Philadelphia at the Houston 35.

The Eagles ran the clock down and Elliott made the kick to make up for missing an extra point earlier in the quarter.

Watson threw a 14-yard TD to DeAndre Hopkins to cut the deficit to 29-23 with 4:48 left and the Texans got the ball back at their 20 after a three-and-out.

Watson made an incredible escape on third-and-11 and threw 22 yards to Jordan Akins for a first down at the Philadelphia 34.

On third-and-11, he hit Smith deep in the back of the end zone. Smith made an outstanding catch, and dragged his feet to stay inbounds.

Foles connected with Nelson Agholor on an 83-yard TD in the third quarter to give the Eagles a 23-16 lead. Foles fired a deep pass that Agholor caught in stride at the Texans 30 and ran untouched to the end zone, stopping at the 1 and falling backward in for the score.

The Texans had a first down at the Eagles 31 on the ensuing drive but Chris Long sacked Watson, forcing a fumble that was recovered by Fletcher Cox and returned to the Houston 49.

Foles then connected with Ertz on a 23-yard TD to give the Eagles a 29-16 lead. Elliott missed the extra point.

Ertz had 12 catches to break Jason Witten’s single-season record for tight ends. Ertz has 113. Witten had 110 catches for the Dallas Cowboys in 2012.

Watson ran in from the 5 one play after Clowney’s strip-sack and recovery, giving the Texans a 9-7 lead.

The Eagles scored a TD on their opening drive for just the fourth time this season. Darren Sproles turned a short pass from Foles on fourth-and-2 into a 37-yard TD to give Philadelphia a 7-0 lead.

INJURIES: Texans: WR Demaryius Thomas (right leg) was carted off the field in the fourth quarter. CB Kareem Jackson (knee) and CB Kayvon Webster (thigh) were injured in the first half. CB Johnathan Joseph (neck) went down in the third quarter.

PHI
N. Agholor5 REC, 116 YDS, 1 TD
This win had so much drama, it obscured the fact that the Eagles have had a habit of blowing key wins in 2018 under very similar conditions. We certainly can say this team never consistently found that “put-away pitch” to close out the at-bat with a late lead, to use a lame baseball analogy. So this was a refreshing outcome to a game which after next week may mean everything or may mean nothing.

Let me just add, Lane Johnson at RT had a whale of a game matched up mostly against J.J. Watt. Wow. If you did an MRI of this game, I would not be shocked if the test results revealed Lane Johnson’s performance was the winning difference.