Your Morning Dump... Where we hope Al Horford can help fix things for the Boston Celtics 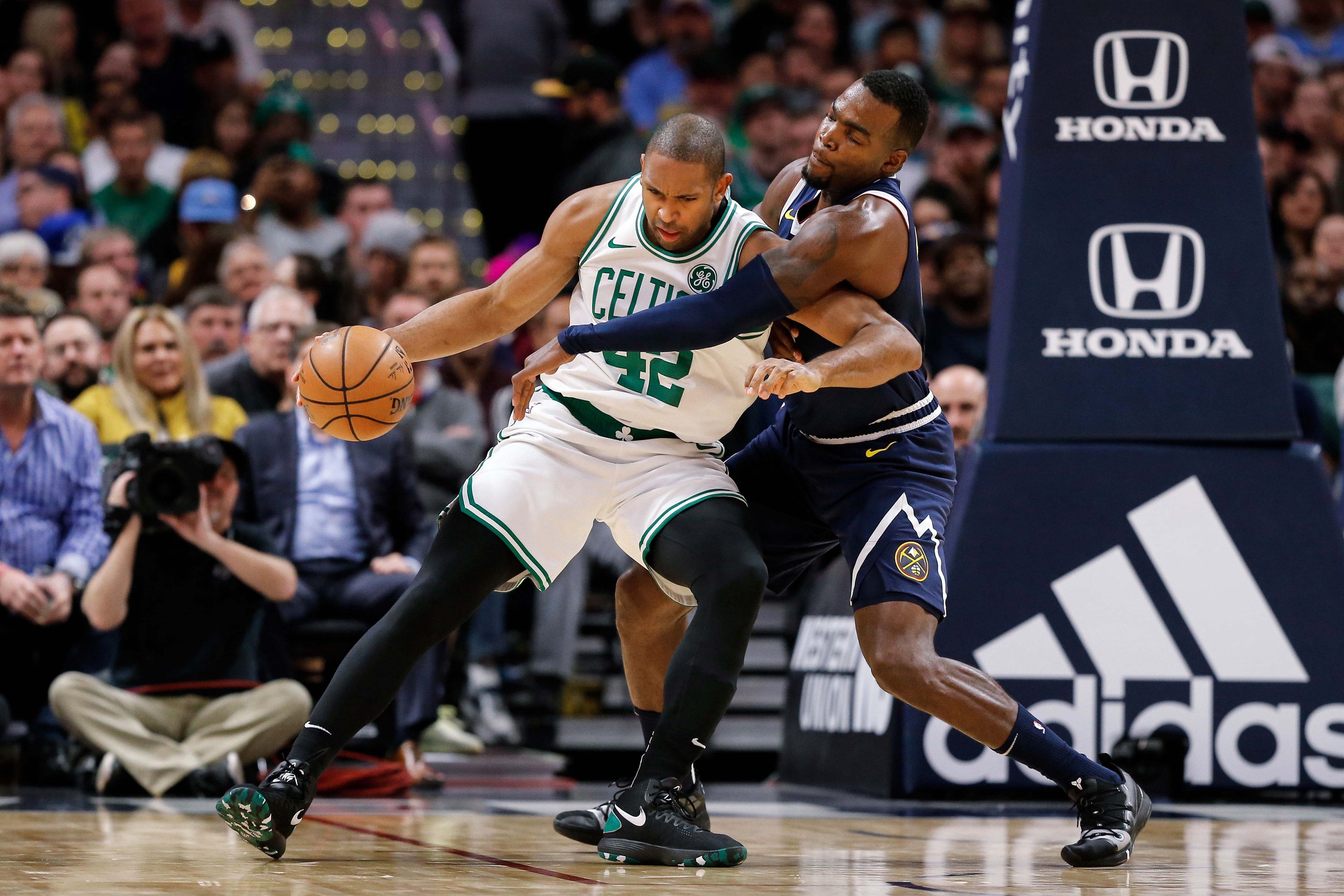 Your Morning Dump... Where we hope Al Horford can help fix things for the Boston Celtics

Barring any setbacks, Horford should return for Sunday’s game and be available for Tuesday’s home showdown against Joel Embiid and the Philadelphia 76ers.

Boston, which has lost three in a row, struggled without Horford, Aron Baynes and Marcus Morris on Friday. The loss inspired a team meeting afterward that kept the locker room closed for more than a half hour before eventually being opened to reporters.

The team is also in the midst of a challenging stretch, with five straight games coming against teams with .500 or better records to end 2018.

Al Horford helps the Boston Celtics in two ways. Obviously, the first is getting a stretch-5 back in the lineup who can reliably shoot, pass, and defend at very high levels. Defenses can’t sag off him in critical times like they did off Robert Williams, or sag off their assignments without fear of being killed by passes like they did of Daniel Theis. Horford’s addition means other teams generally pay for mistakes.

The other way he helps is by pushing Theis and William a seat further down the bench so they can face second units rather than starting fives.

Theis is an unbelievably solid pickup. He’s great off the bench and against certain matchups can be a difference maker and critical in building leads. Williams is obviously talented, but he’s very raw. The minutes help him learn from mistakes, but those lessons can’t be learned in clutch situations right now. The kid is going to be a major factor in Boston’s future success, but his minutes should come in certain situations. Ultimately, when Baynes is healthy, he can apply his NBA lessons to the G-League to get the minutes he really needs to learn and grow.

Horford could be a critical piece against Philadelphia the way he was against the Sixers in the playoffs. Drawing Embiid away from the basket is a major step in scoring on Philly, and Horford does that better than anyone. Now that Robert Covington is gone, it’ll be interesting to see how Philadelphia tries to guard Horford.

Step one is this game against Charlotte, which I would guess would come with some kind of minutes restriction. Then they’ll see how the knee holds up. Hopefully they’ve gotten it strong enough where he can stay on the floor.

Page 2: Reading between the lines of the post-Bucks loss meeting

Irving hinted that, like any star, he might yearn to play 40 minutes and score 40 points per night. But that’s not what would help this team the most. The Celtics play their best basketball when they share the ball and everyone contributes so he’s put a heightened emphasis on getting his teammates involved. But Irving seems frustrated that others are not so eager to sacrifice themselves for the greater good of the team….

[…] This seems a direct message to Boston’s youngest players — Terry Rozier, Jayson Tatum, and Jaylen Brown — about the conflict they’re facing this season, trying to maintain their star status from last year’s playoff run all while accepting diminished roles with the return of two healthy All-Stars. Irving appears frustrated that those players are settling for poor shots at times — whether that’s early-clock jumpers or isolation fadeaways — and he wants the team to work harder for better shots.

NBCS Boston: Reading between the lines after Celtics’ closed-door meeting

Chris Forsberg unpacks a lot in this piece, including the Kyrie quotes and some strong evidence of selfish play in a critical non-Kyrie sequence.

I’m not in the minds of some of these players, so I don’t know why they’re doing what they’re doing. Some of it might be just how they’re wired. Terry Rozier isn’t really a passer, and maybe the simple answer to why he misses reads on pick-and-rolls is that he turns the corner and immediately looks to score first and the passing comes out of him not having a shot.

This brings me to what we knew would be Brad Stevens’ biggest challenge yet. No Stevens team has come into a season with this much talent and expectations this high. His biggest challenge was always going to be keeping the egos in check and getting the players to play together instead of believing their own hype.

It’s obviously not easy. Some guys are motivated by money… which doesn’t always mean playing for their next NBA contract. It could be that they’re playing for a higher endorsement profile, or simply to enhance their personal brands. The business of the NBA isn’t just about trades, trade requests, and free agency decisions.

One major divide between fans and NBA teams and players is that fans think of the game like they think of college or high school. They think of things in terms of the coach coaches, the players listen and do what he says, and at the end everyone gets orange wedges on the bus.

The injection of money and player movement makes professional basketball a different animal, and it’s something that most people can’t comprehend unless they’re in that world.

Doing what the coach says isn’t always the number one priority for players. And if that line make you think something like “well then trade the bum!” then most of the league will get traded every day. Some of it is innocuous mentality like “I know I’m supposed to go here but I can beat this fool so I’m going to take a shot I know I can make.” Some of it is “I’m not going out there and passing when I’ve got a contract on the line.” And some of it “What the hell does this guy know? I’m going to do this on my own.”

I don’t think anyone on the Celtics is thinking that last thing, and I’m pretty sure most of it is that first thing. The problem is that none of those things help the Celtics. Whatever is happening out there, the players need to understand one simple thing:

If they continue to think that they alone can personally will the Celtics to wins, they will continue to lose, and they will all individually be tied to a very disappointing season, which will hurt them all personally in their individual pursuits.

However, if they somehow come to understand that their personal sacrifice will lead to a lot of Celtics wins, then they will ALL be seen in more positive lights, which will raise everyone’s stock.

Everyone who is seen as a contributor to a great team has value to another team trying to be great. Players who are seen as detriments to a team that should be great are not very highly valued by other teams trying to be great, or brands trying to sell the general public on greatness.

I’ll make it simpler: No one wants to be associated with a loser. People want to hang out with winners. That includes fans, other teams, sponsors… everyone.

Tony Parker will walk into that arena tonight with everyone’s respect, not just because he had a fine career, but because he was part of four Spurs titles and he ran an offense that didn’t give a shit who scored.  If he’d had that career in Sacramento with some OK teams, he’d be Rod Strickland. He’d be a pretty good point guard we forget to mention.

But he’s got four rings. He was part of The Spurs Dynasty. Was some of that shine because of Manu Ginobili and Tim Duncan? Sure. But who cares?

Maybe a disappointing season is what some of these guys need. Maybe they need a full year of thinking they know better and a summer of people doubting them to realize that people will take that crown off their heads faster than they put it on them if they don’t put in the work to earn it. Maybe months of Boston’s boos will teach them that effort is valued over talent in this town.

Or maybe they can figure things out quickly and learn these lessons on the fly. They’re right there for the learning. There’s no grand secret here. It really comes down to a choice… play together, or not.

We’ll see what they choose.

This is a great trend for the NBA

That day is coming soon as teams embrace women and their basketball knowledge to help set the path for their organizations.

The latest club to add a female to its front office staff is the Indiana Pacers, who hired Kelly Krauskopf as an assistant general manager after she served as GM of the WNBA’s Indiana Fever for 17 years.

The only way to properly run any organization is through diversity of ideas and approach. Healthy debate from differing perspectives allows any leader to take in as much information as possible and make good decisions.

There is zero reason that gender, race, ethnicity, or sexual preference should exclude anyone from a job in professional sports and the NBA. Ultimately, we all want the same thing… we all want to win. If someone can help my team win, sign him or her up.

Representation matters, too. Young girls seeing women involved in the NBA are inspired to pursue similar paths. Even if it doesn’t lead to the NBA, these young girls can feel empowered to pursue fields where they were historically shut out.

In the end, this will make for a healthier NBA. My ultimate goal is for basketball to become even better than it is today, and that means including everyone from every walk of life who can make a positive impact.

The Athletic: As Kyrie Irving thrives in Boston, part of him remains attached to New York City