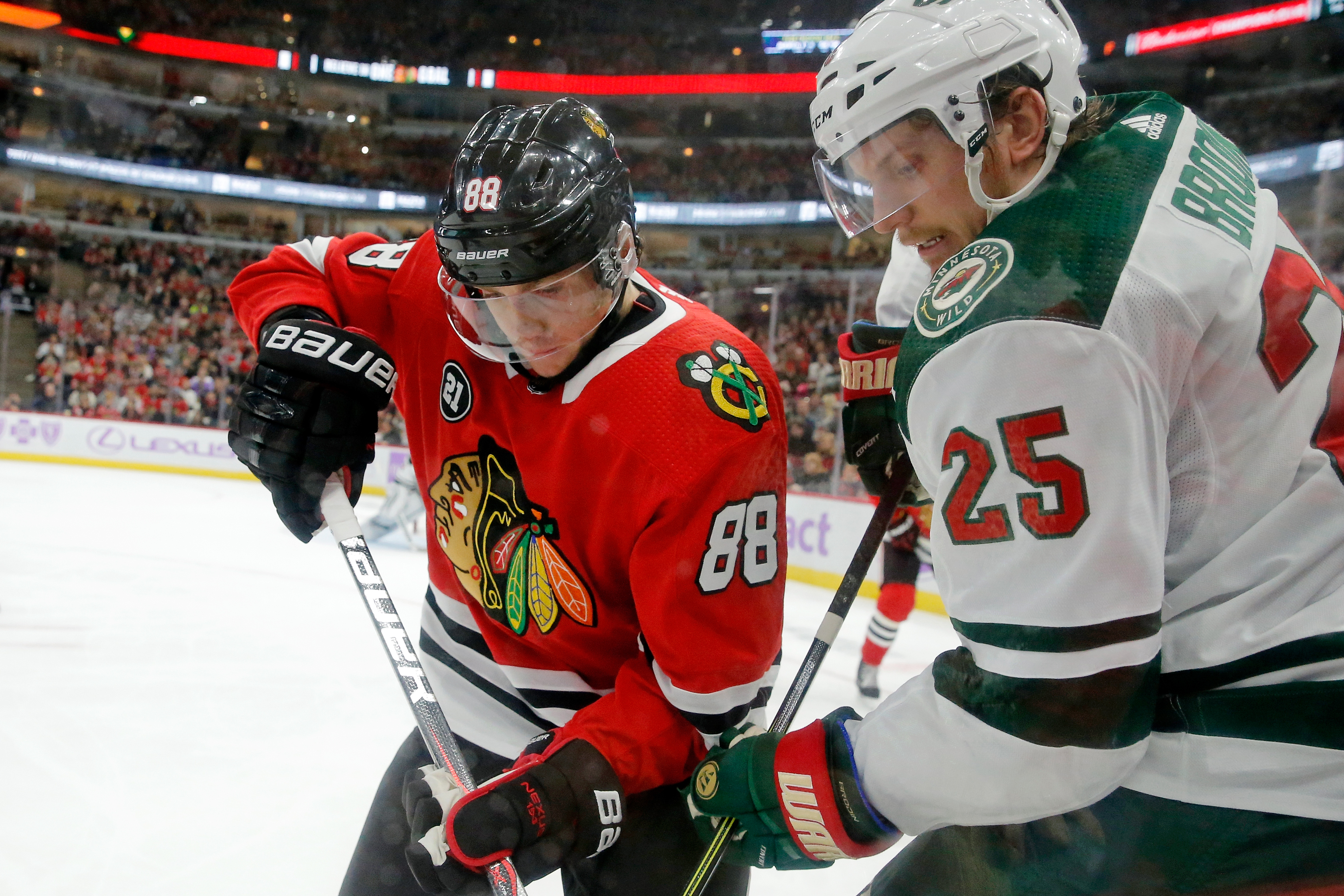 Holidays greetings everyone, as the Minnesota Wild and the rest of the league return to action after their ‘holiday break.’  For some reason I doubt Wild Head Coach Bruce Boudreau got much of a break as he tries to figure out why his club isn’t scoring goals and whether or not he has a goaltending problem on his hands.  So while Wild players likely celebrated Christmas with their families, I think in the back of their mind they know they have to dig themselves out of the hole they’ve created.  Or perhaps a few players started to collect some cardboard boxes because they may be moving…soon.

The Chicago Blackhawks, on the other hand has mostly been admired in the abyss since about the 2nd week of the season.  Salary cap pressures have steadily degraded their team’s depth and Chicago general manager Stan Bowman made some moves by giving Joel Quenneville the axe, replacing him with 33-year old Jeremy Colliton and shipping out former 1st round pick Nick Schmaltz to Arizona for Dylan Strome and Brendan Perlini.  The move hasn’t exactly lit the world on fire, but Chicago has fully embraced a youth movement to work along side franchise stalwarts Jonathan Toews, Patrick Kane, Duncan Keith and Brent Seabrook.

Kane is still one of the more dangerous players in the league offensively and has been a Wild killer for years.  Toews has enjoyed a better start to this season while Alex DeBrincat continues to demonstrate he’s a skilled finisher in a pint-sized frame.  Brandon Saad continues to be a mild source of frustration for Chicago when you consider they let Artemi Panarin go to bring him back.  But I guess Toews is scoring again, so it kind of worked?!?!

Erik Gustafsson has quietly had a bit of a breakout season offensively and is now the top pairing partner for Duncan Keith.  Overall, the Blackhawks blueline is still young and pretty suspect which has meant whoever is between the pipes has a tough task before them.  Corey Crawford can’t seem to stay healthy and he’s out with what most believe to be another concussion and that means the team will try to soldier on with veteran Cam Ward and minor leaguer Connor Delia.  Delia hasn’t had much work with the big club this season, but perhaps they give him the start to see if he can carry the team.  Ward had a rough start against the Wild earlier in the season.

On the flip side, the Minnesota Wild’s biggest struggle has been to light the lamp.  The offense has more or less disappeared and the team’s inability to bury its scoring chances has been a big part of their free fall.  Mikael Granlund, Charlie Coyle, Mikko Koivu and Eric Staal have looked especially snake-bitten in their last few games.  A lesser told story that relates to their offensive issues is the Wild’s inability to draw penalties.  Even with the man advantage, the power play has mostly looked lost and disorganized since the injury to Matthew Dumba.  They miss Dumba’s Alex Ovechkin-esque one-timer from the left faceoff dot and so far no one seems able to step up and fill in that void, even if it means looking to set up a right faceoff dot sniper instead (cough Jason Zucker cough).  The team got the news over the break that Dumba is expected to be out at least 3 months with a ruptured pectoral muscle.  Ouch, literally and figuratively for him and the Wild.

Defensively, Greg Pateryn has filled in on the 2nd pairing reasonably well, but he cannot replicate the puck moving ability that Dumba brought to the team or Jared Spurgeon has playing along side Jonas Brodin.  So far the team seems to be content in playing Nate Prosser and Nick Seeler on the 3rd pairing.  Ryan Suter seems to want to try to fill in some of that void by pinching more frequently but he lacks the speed to get back into the play if a scoring chance fails to materialize and at times that has led for odd-man opportunities the other way.

Between the pipes the Wild have decided to let Devan Dubnyk work out his troubles by continuing to give him starts.  While Dubnyk isn’t playing horribly, his penchant for giving up the soft-goal has been too much for Minnesota’s goal deprived offense to overcome.  Some fans have been wanting to see Dubnyk given a break to refocus and allowing Alex Stalock to get some time but the Wild clearly seem to think if there is a day off between games the crease belongs to “Duby.”  Some believe his issues stem from waning confidence while others believe fatigue (physically and mentally) or difficulty tracking pucks as the culprit for his recent issues.  Whatever it really is, my guess is Dubnyk gets the start tonight.

So what are the keys to victory this evening?

1. Keep it simple – When your struggling to score goals, its often the result of overthinking and try to make the perfect play instead of funneling pucks on goal.  The Wild have peppered goaltenders with shots but haven’t been able to bury them.  The worst thing the Wild could do is try to be picky and attempt a bunch of fancy tic-tac-toe set ups after having a few days off.  Move the puck quickly, create some traffic near the crease and work their way in close for scoring chances.  Ugly goals count just as much as the pretty ones do.

2. Focus on Chicago – The Wild can’t get caught worrying about what the other teams in their division and conference are doing and must simply focus on dealing with Chicago.  They cannot overlook Chicago because its at the bottom of the division; they need these two points and need to do all they can to bury this team.  The Wild have no reason to coast or believe they can just show up and win.  Minnesota needs to try to win each period, and if they do that the game will take care of itself but the last thing this team needs coming out of the break is a heartbreaking loss to a bottom-feeder.

3. Pay the price – If Dubnyk does get the start, a good way to help him out is by doing what can be done to get sticks and bodies into shooting lanes and preventing more shots from ever reaching him in the first place.  It may be painful, but get out the skateguards and be prepared to pay a price to keep pucks from your goaltender otherwise be prepare to see another soft goal or two crush your hopes.

What do you think will be important for the Wild to earn a win against Chicago?  Tell us on Twitter @CreaseAndAssist or in the comment section below!