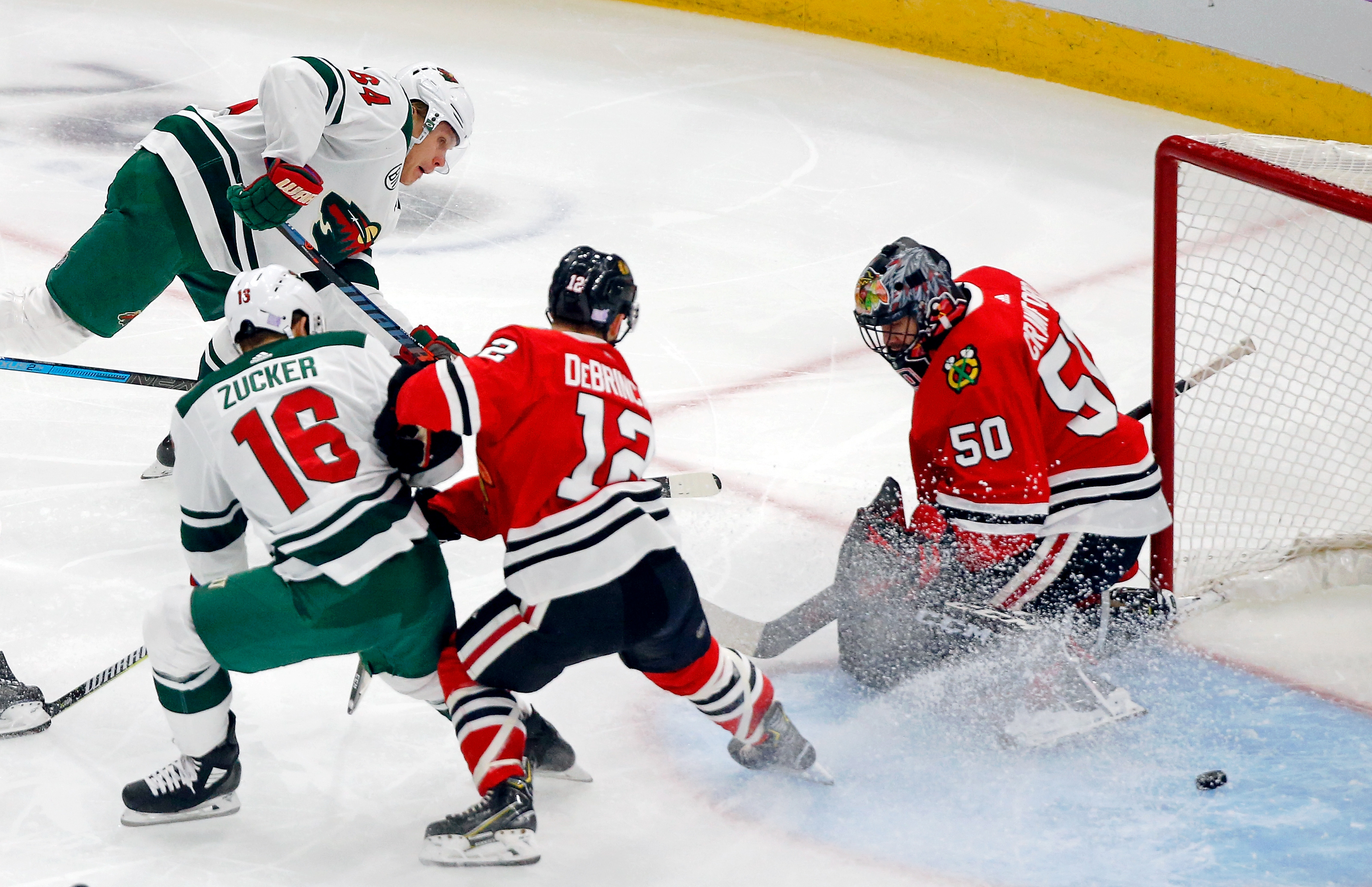 Happy Holidays everyone!  I hope everyone is safe and sound and that you had a wonderful time with your respective families.  I wonder if things were as festive or the families and members of the Minnesota Wild.  A season that has been in a bit of a free fall of late as they’ve gone 3-6-1 in their last 10 games after losing in overtime to the Dallas Stars before the holiday break.  That disappointment probably lingered a bit.

The Wild are hoping to put those painful memories behind them as they make the short trip to Chicago.  Will the holidays finally gift the Wild with some more offense?  Or will Chicago provide another painful lesson that Santa Claus filled the Wild’s stocking with coal?

1st Period Thoughts: There’s nothing I dread more, than facing a goaltender who doesn’t even have a handful of games in the National Hockey League. Now, at least Collin Delia has put in a good showing with his limited games behind a less-than-spectacular Chicago Blackhawks. However, with that being said, the Minnesota Wild are notorious for making rookie and/or backup goaltenders look like the next coming of Martin Brodeur. I have a bad feeling that we’ll be lucky to get one goal tonight, and with the way Devan Dubnyk has been playing, that simply won’t be enough. And as I thought would happen, Dubnyk would give up the first goal with Jared Spurgeon tied up with him, giving Patrick Kane the space to get the opening goal. Oh, and that was the first shot on goal by the Blackhawks. Yep, it’s going to be one of those nights, and shortly after that opening goal, Dubnyk almost gave up another. But at least the Wild broadcasters were talking up Dubnyk’s success against Chicago in the pre-game coverage. Now, I’m hearing about how the Wild have been out shooting their opponents. Yes, they’ve been doing that, but when the shots are low-percentage kinds of shots, I’d rather have quality shots as opposed to quantity of shots. There will be moments, where it looks like Mikael Granlund and Jason Zucker will put something together to get the Wild on the board, but with the way things are going right now, it will miss or fall apart at the last moment. The first penalty of the game would come  in the 11th minute of the opening period, with Nino Niederreiter getting tagged for holding the stick. I can’t tell you how much I hope the Wild find a buyer for Niederreiter, as I’m ready to let that ship sail. I also have to laugh, we were told that Dubnyk leads the league in save percentage when on the penalty kill. Seriously, do we need to cheer such pathetic stats? Minnesota would again kill the penalty, and would get a power play of their own when Brendan Perlini got called for tripping. The Wild would spend good portions of the power play in the offensive zone, in which the tallied 5 shots on goal during the man advantage. It looked like they were going to accomplish nothing more than just tiring the Chicago penalty killers, but just after the penalty was killed, the hard work of Minnesota’s skaters saw a well-earned goal by Zach Parise. It would be a “win” for this period to head into the locker room with the 1-1 tie. Yes, the Wild great outshot Chicago in the opening period, but with how the games have gone this month, I’ll take a tie heading into an intermission.

2nd Period Thoughts: I honestly don’t get this team. Just 23 seconds into the period, Brandon Saad was to get a puck to trickle its way past Dubnyk. I mean, really? And then to add insult to injury, after that goal, they applied the first real pressure on Dubnyk all game. Eric Staal would take the Wild’s second penalty of the night, this time for tripping. The Blackhawks and Kane didn’t take long to take the 2-goal lead with a one-timer. At least this time, head coach Bruce Boudreau didn’t wait to pull Dubnyk for Alex Stalock, which of course takes longer in Chicago because the visiting team’s backup goaltender can’t sit on the bench due to lack of space. But when you give up three goals on ten measly shots, you can’t wait for Dubnyk to turn things around. The Wild would get their second power play of the night after Parise took a Duncan Keith stick to the face, under the visor. While it initially looked like it would be a double minor due to the towel brought out on the ice, the officials ruled it would be a single minor. Then as if things weren’t bad enough, Stalock would take a delay of game penalty for playing the puck outside of the trapezoid. Looking at the replay, that was super ticky-tack, as I have seen far more brazen breaking of that rule by other goaltenders that have gone uncalled. After the penalties on both sides were successfully killed, it seems like only players like Jordan Greenway have the sense of urgency needed. Again, I like seeing that, but it ultimately begs the question where the big salary players are. There are too many absent players right now, and the heroic efforts put forth by players like Greenway isn’t enough to win games on most nights. But then I see half-hearted attempts by Mikko Koivu, I’m only left with shaking my head. The Wild are losing the little games here in the 2nd period. Meaning, times where they should be able to easily clear the zone, they pretty much give it to a more determined Chicago skater. It’s those kinds of things, that makes you realize just how defeated this team is mentally as well as physically. When you can’t even score a goal with Delia clearly out of position, you have problems. Zucker is clearly dealing with cement hands syndrome. There were some late pushes by the Wild in the last minute of the period, but of course nothing would come of those chances. While we need this team to come out strong and stay strong for the third period, I just don’t think they have it in them.

3rd Period Thoughts: Well it seems that the Wild are continuing to give the Blackhawks easy scoring chances at the start of the period. At least Stalock wasn’t willing to bend as easily as Dubnyk. I think one thing that is super frustrating, is that I, like many, were hoping for a repeat of last season for Staal. We’re definitely not getting that. Minnesota will get a chance to cut the Blackhawk’s lead with Chicago getting called for too many men. I wish this was like the earlier power play, where they managed to keep the puck in the offensive zone with few whistles. This one, we’re not getting the same pressure, and it means that Koivu gets his chance at the power play, which is really just a waste of time. There are a lot of things about this team right now that make them a waste of time in general. And when you need this team to play the “basic hockey” the players keep talking about during intermission interviews, they go for the highlight reel passes which of course stymies any attempts at serious possession. Granlund is particularly guilty of this habit, it’s as if he’s trying to relive his goal that was immortalized on a postage stamp. Staal would take another penalty for tripping in his attempt to get back onsides. The game would get worse, as Stalock would get caught out of his net, which would allow Saad to get his second goal of the night. There’s just so much wrong with this team. I honestly want to blow the entire team up and start fresh. Time to get rid of the big money hogs of Parise, Koivu, and Ryan Suter. Time to shed the dead weight of Coyle and Niederreiter. And it’s especially time to blow up the scouting staff. It’s time to rebuild from the ground up. This team has been riding on minimal success for far too many years, that they truly believe that they’re better than they really are. But hey, this team thinks they have a chance tonight, so they pulled the goaltender with just over three minutes remaining in regulation. Yeah, that will work. Oh, are you excited by a Staal goal with 50 seconds remaining in regulation? I’m not. Especially not when it is followed up by a Kane hat trick. I’m done. You don’t need a description of the last 26 seconds.

I hoped you enjoyed the highlights from Iowa’s games just prior to the Christmas break.  With the Wild’s injury situation a little more defined, I think more thoughts are going to be about who might be available for action from its top minor league affiliate.  Iowa was a bit sleepy out of the gate as the Rockford Ice Hogs controlled the pace of play throughout most of the 1st period.  Kaapo Kahkonen was very busy, stopping 15 shots but to his credit he kept Iowa in the game and it was 0-0 going into the first intermission despite the fact the Wild only managed 3 shots of their own.  In the 2nd period, Iowa would get their legs going and they struck just past the 3-minute mark on nice wrist shot off the rush by Matt Bartkowski after a nice set up by Gerald Mayhew.  1-0 Wild.  Rockford tried to answer back but Kahkonen was rock solid.  Iowa would add another late in the period as Gerry Fitzgerald scored his team-leading 12th goal of the season as he tapped in a rebound off a falling shot by Mason Shaw.  2-0 Wild going into the 2nd intermission.  Iowa would strike early in the 3rd period on Will Bitten‘s 1st goal of the season after he redirected a Brennan Menell shot to make it 3-0 Iowa.  Rockford again carried most of the play throughout the 3rd in search of cutting into Iowa’s lead but Kahkonen was a wall.  Matt Read would add an empty netter to seal a 4-0 victory for the Wild.  Kahkonen earned his 4th shutout of the season with a 39-save performance.

LW – Kirill Kaprizov (CSKA Moscow, KHL) ~ the skilled winger has knack for clutch goals and he’d bury the game winner in overtime to give CSKA a 4-3 victory over Neftekhimek.  Kaprizov has 17 goals, 27 points, 10 PIM’s and is a +21 in 38 games.