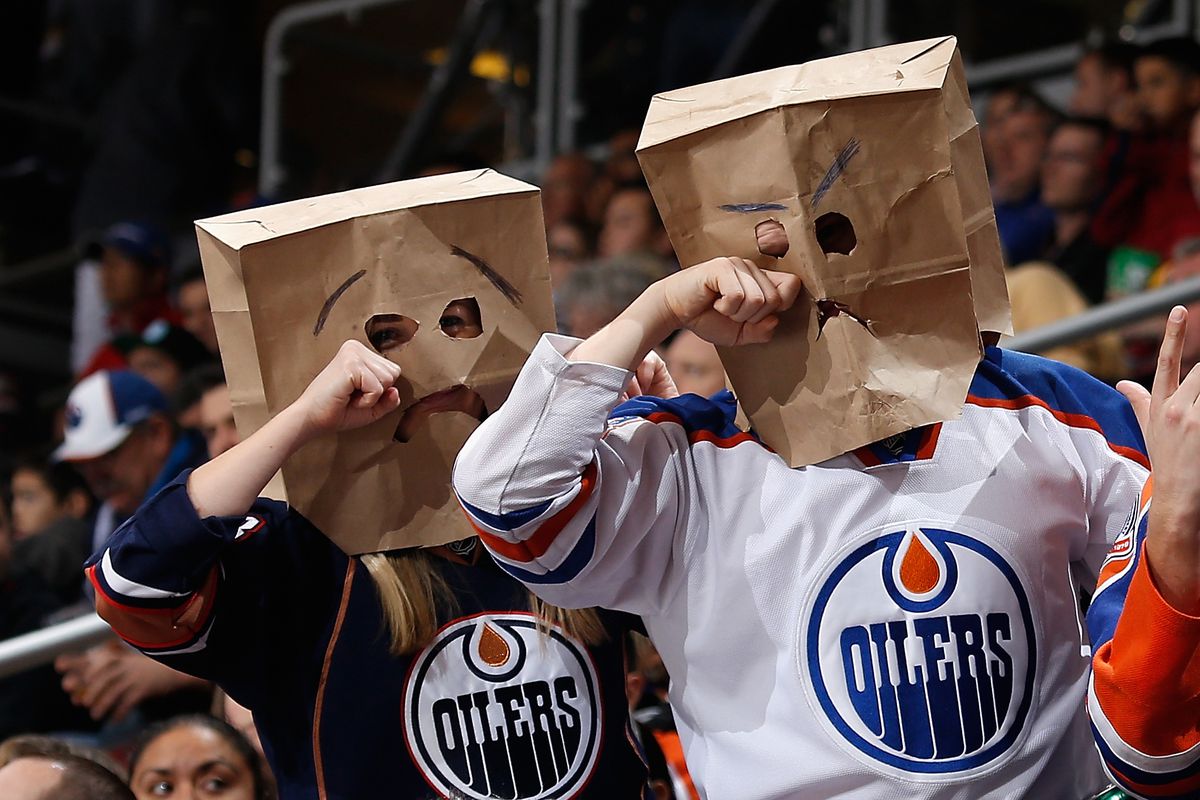 It’s quite frustrating watching your season circle the drain for the 12th time in 13 campaigns, isn’t it? That’s the reality of things now for Edmonton Oiler fans. For the second time this season, an 8-2-1 or better stretch has been followed by a four game losing steak that makes the team look like a lottery club.

Thursday night’s loss absolutely reeks, their second in as many tries against the lowly Vancouver Canucks. Only one team showed up to play in this game, and it wasn’t the supposedly desperate team at home whose playoff spot was on the line and who had lost three straight and two in a row at home.

No, it was the Canucks that actually decided to show up and perform, taking a 4-1 lead they would not lose into the first intermission. Sure, the Oilers played fine in the final forty minutes, but that’s a pretty hollow effort with the game already well decided.

Edmonton is now out of playoff position, and with the San Jose Sharks and Winnipeg Jets coming to town in the next few days it looks like school might be out for this bunch. Following those two tall tasks at home, Edmonton makes a pit-stop in Arizona prior to their second California road trip of the season.

They aren’t in a playoff spot now, and the schedule ahead dictates they won’t be in one when 2019 gets rolling in just a few days. In fact, looking ahead, it is very easy to see this season becoming lost in the next two weeks.

It is year four of Connor McDavid’s tenure in Edmonton. The Oilers, if everything falls right, are a Wild Card team. There may be no bigger failure in professional sports today. I mean, hell, even the Cleveland Browns have figured out how to build around their superstar.

The Oilers? Well, without having the Hockey Canada talent pool to choose from we are seeing the true colors of Bob Nicholson and Peter Chiarelli.

Peter Chiarelli, following Edmonton’s defeat in the 2017 Stanley Cup Playoffs, made mention that his team’s defense wasn’t quite on par with the final four teams in terms of quality and depth. Edmonton’s defense had played fine in 2016-17, but it simply wasn’t as good or as deep as Nashville’s or Anaheim’s. Chiarelli’s answer to that question, while knowing he would be without Andrej Sekera? To sign Yohann Auvitu.

Chiarelli, earlier this season, publicly stated that his defensive group wasn’t good at moving the puck. He came out and said the defense that he’s invested so much in over the last four seasons wasn’t good enough! Meanwhile over the summer he tried to trade, and nearly did, Oscar Klefbom for the Bruins’ number five defender in Torey Krug. After that fell apart, he settled on Jakub Jerabek and Kevin Gravel as the weapons of choice in the summer.

Now Edmonton’s defense is costing them in a major way. The Oilers transition game is one of the worst in the NHL, their penalty killing is putrid, they have no threat from the point on the powerplay, and their saving grace in Darnell Nurse is sinking faster than the Titanic. Perhaps Chiarelli, instead of standing pat once again, should have addressed this hole in a meaningful way?

Meanwhile, Edmonton can’t score either. Chiarelli somehow will go down as the man who lost two Ryan Strome trades, dealing a competent third-line center in Strome for a player who I’m not sure has a single use in Ryan Spooner. Drake Caggiula has continued to run hot-and-cold, recently being a complete liability in the Oiler lineup defensively.

The most handicapping thing around? The monster contract handed out to Milan Lucic. Lucic, who has not scored since opening day and has just two goals in the 2018 calendar year (and in his last 83 games played) is approaching ‘worst contract in NHL history’ status. He’s bogging down every single line he plays on, and honestly at this point should be a healthy scratch on a nightly basis. He’s bringing absolutely nothing to the table and yet, he was Chiarelli’s marquee addition to the forward group.

Lack of scoring, lack of depth basically everywhere and a poor transition game. Those are the things sinking the Edmonton Oilers and each and every one of those issues can be traced back to the current management team. That is an undeniable fact.

Don’t Give Me Injuries Either:

The Boston Bruins went through a lengthy stretch where they did not have Zdeno Chara, Charlie McAvoy, Patrice Bergeron and Jake DeBrusk. Boston still found ways to win games and is still currently in a playoff spot. Don’t give me injuries as an excuse, because outside of Klefbom and Russell this team is relatively healthy.

And no, I’m not giving the Oilers the benefit of being without Sekera. The guy has had major injuries since the spring of 2017, don’t you think you should be looking for insurance in that spot? I’m not talking about a player who no longer belongs in this league like Jason Garrison either, no I’m talking about an actual NHL top-four D. They’ve had two years to find that guy, I have no sympathy for them now.

Every single team suffers injuries, and right now it is the Oil’s turn. Does it suck? Yeah, it absolutely does. Nashville and Boston know how it feels too, but both of those teams figured it out and pushed forward. If you want to make an excuse for this team then fine, but bottom line is they aren’t good enough to withstand any kind of injury and that falls, once again, on management.

You can blame injuries, you can buy into Peter’s ‘plan’ (does anyone know what that plan even is?), you can blame the NHL for being out to ‘screw the Oilers’, but you can’t avoid the sad truth. The Oilers are going to miss the playoffs for the third time in four years with Connor McDavid. In fact, and these are the words of people I’ve talked to in the NHL and not myself, they are arguably the worst team in hockey without McDavid.

That is simply unacceptable. You can use patience if you want, you can believe that better times are coming if you wish, I’m not going to tell you how to think, that is not the purpose of this post. That said, Edmonton is in a dark spot and isn’t even close to competing for a Championship. In the fourth year of McDavid, that is a laughable fact.

Chiarelli and Nicholson have neutered this team. They are boring, they lose far more often than not, and they are frustrating. What should have been a return to glory for this organization has just been an extension of the decade of darkness.

McDavid or not, this team is in big trouble and going no where fast. If Daryl Katz gives a damn, and I’m not quite sure that he does, then he cleans out his management team and he does it now. I’m sure Hitch wouldn’t mind based on his thoughts of his current roster.