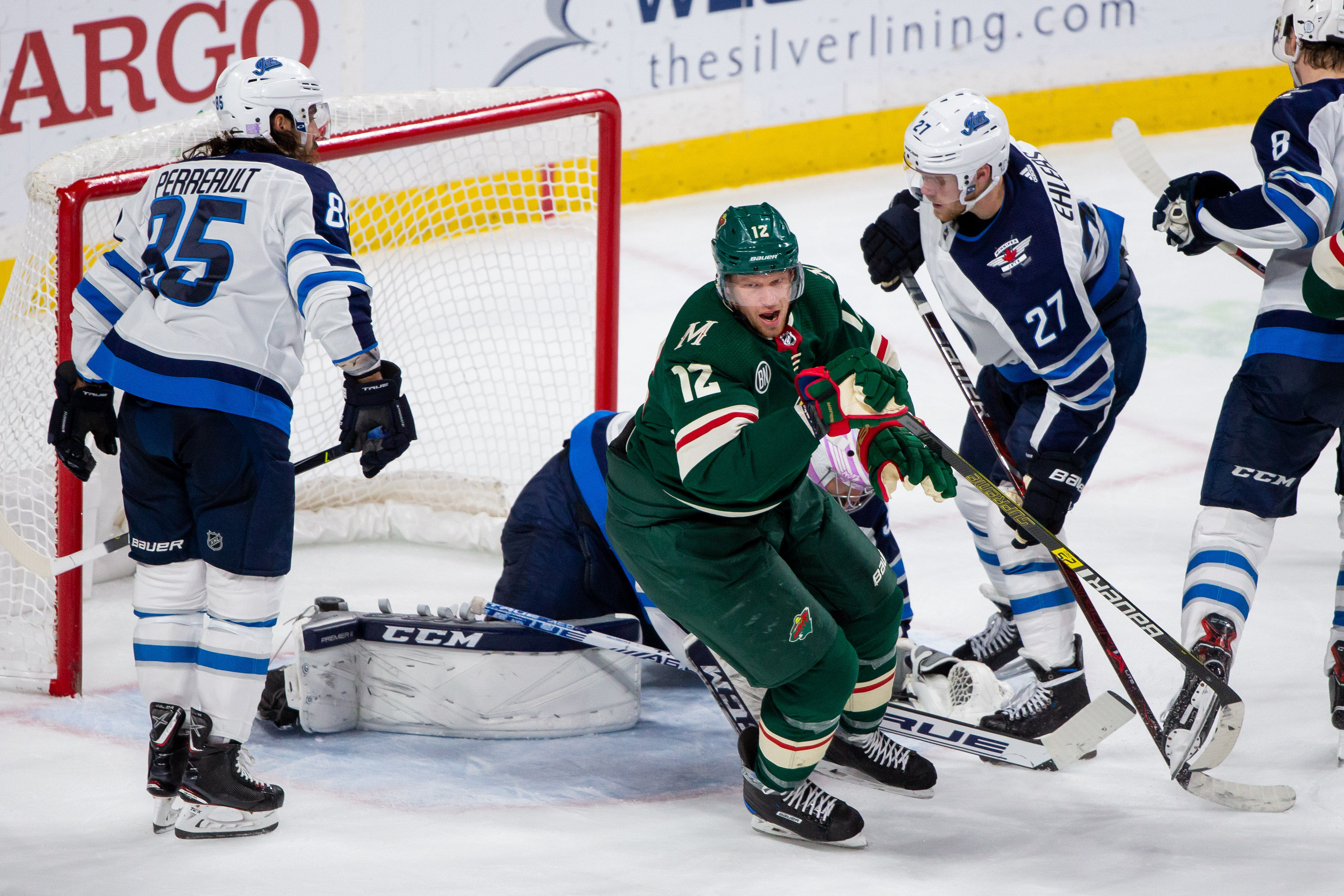 A little while ago I was at the grocery store in town and while walking through the liquor aisle I couldn’t help but notice they had a pre-mixed box of Long Island Iced Tea much the same way you’d see a box of wine.  My husband and I enjoy having a nice drink after a hard day of work, and occasionally if the Minnesota Wild are struggling we’ll have one to cope with our disappointment.  In the wake of this latest 5-game losing skid, we may have to see if they make these Long Island Iced Tea boxes in bigger sizes.

Oy Vey.  The Winnipeg Jets are 7-3 in their last 10 games and despite their setback against Calgary on Thursday are a team riding high and will be more than happy to keep the Wild’s death spiral going.  Can Minnesota rise above its current malaise to earn a win in Manitoba?

1st Period Thoughts: I’m going to let you in on how I’m feeling early about this game. When Derek told me this morning that Devan Dubnyk was getting the start, I pretty much said that all I wanted to write today was “I quit in protest.” This makes no sense. Head coach Bruce Boudreau said after pulling Dubnyk in Chicago, that he didn’t care about hurting Dubnyk’s feelings. Now he’s pretty much implied that he wouldn’t bench a guy after a bad game. Um, Dubnyk hasn’t exactly looked golden late coach. So yes, I feel like throwing my hands up in the air and walking away. Oh, and we have a new face in the defensive pairings today. Nick Seeler is out with an upper body injury, so taking his place alongside Nate Prosser will be Matt Bartkowsi. After about five minutes in, the Wild have 5 shots on goal. Again, outshooting their opponent, but not much of quality. That has been the issue. Yes, I’m glad this team is getting plenty of shots on goal, however they need to find a way to turn more of those shots in quality shots on goal. You know, the kind that become goals. Near the mid point of the opening period, the line of Jason Zucker, Eric Staal, and Mikael Granlund applied some offensive pressure on the Jets. It only netted a single shot on goal, but it kept the puck in the Jets zone. That extensive offensive zone time became a Wild debut goal for Bartkowski. Unlike most teams, the Wild don’t often get goals from debut players (or wins/shutouts if we’re talking goaltenders). Minnesota now needs to find a way to build on that momentum, something that has been a bit of an issue for this team. They’ve had some issues scoring the first goal this season, seemingly always having to play catch up. Now, we have to see if they can maintain the lead, and more importantly build on the lead. Jordan Greenway took a Nino Niederreiter puck to the cheek. It looks like the kind of thing that can be patched up on the bench, because when playing the Jets, you don’t want to lose some size and aggressiveness. And he did find himself back in action, on a 2-on-1 that Connor Hellebuyck was able to stop. One thing that the Wild skaters are doing very well in this period, are getting their sticks in the passing and shooting lanes. And because of that, it’s limited the Winnipeg shots, but it’s also created odd-man rushes on goal, like the Greenway scoring chance. And it’s chances like those that create confidence. Wild skaters are looking both for chances on the rush as well as the up close dirty chances on goal. Dubnyk’s first real challenge came just before the final minute, with a puck coming off the back boards. He managed to make the stop and allow the Wild to clear the zone. Minnesota would head into the locker room with the 1-0 lead, which when playing the Jets in Winnipeg, is a win all by itself.

2nd Period Thoughts: And here we go with the second. The bad games lately have kind of bled into each other, so much so that I honestly can’t remember if it’s the second period or the third period where things fall apart. And when you have the lead, you have to worry if they will let up on the gas. Minnesota would get a great scoring chance by Zach Parise on a break away, but he didn’t have enough of a shot, so Hellebuyck was able to kick it away. Winnipeg right now is continuing to get Minnesota room to move and make things happen. They didn’t learn from the missed chance by Parise, as he was allowed to move the puck and get it to Charlie Coyle for the 2-0 lead. Now that Coyle is on the board, there’s hope for Niederreiter as well. In general, I don’t like matinee games, as the Wild often show up looking confused about the early game time. Today however, it’s the Jets that have that ill-prepared look about them. That too is a refreshing change of pace. Winnipeg isn’t looking like the team that tops the Central Division, and with Nashville just four points behind them, they can’t afford to have “off” games like this one. However, I foresee a lot of jostling yet to come in the Central Division standings. And if Minnesota manages to turn things around, it will make things interesting. In this period, the Jets have certainly closed the gap in the shot differential. Many of their shots though have felt like many of Minnesota’s in recent games, however the few serious shots headed Dubnyk’s way, he’s managed to stop. However, the first power play of the game would go to the Jets with just over three minutes remaining in the period because of a cross-checking infraction by Greg Pateryn. This is the time where things could really change. However the first scoring chance of the power play came to a Wild shot on goal by Marcus Foligno. And just like they have all game, the Wild’s sticks are continually in the way, and they’re finding ways to clear the zone. It turned out to be a fairly easy kill. This period has felt slow, and a bit nap-like, which definitely has me concerned for the final period. Will the Jets wake up and play an aggressive, physical game, a game the Wild can’t handle? Will their top scorers like Mark Scheifele and Blake Wheeler finally show up?

3rd Period Thoughts: While it feels good to have the lead, I feel a need to remind myself about the dreaded 2-goal lead and how it’s the worst lead in hockey. And it seems like the Jets realized that, and certainly looking to prove that proverb true. There were a couple of times early in the period where Dubnyk needed to be sharp, and unlike other games, he was up to the task. Minnesota continued to use their sticks to break up the passes and to create offense of their own. However, Scheifele and Wheeler both have finally showed up in this game. They’re trying to create much needed offense, and also drew the second penalty of the night with Niederreiter getting called for holding. With Winnipeg finally showing up, this is the last thing you want, to give their excellent power play a chance. It also helps when the same officials missed a blatant holding the stick call when the Wild are trying to clear the zone. That allows the Jets to maintain the offensive zone pressure on the power play, which turned into a power play goal by Patrik Laine. Near the midpoint of the period, and the shots are even at 22 a piece. Just after the midway point, Dustin Byfuglien would head down the Winnipeg tunnel after an ankle tweak of some sort after a check along the boards by Luke Kunin. I won’t argue if Byfuglien if off the ice for the remainder of this one. However, considering the $2500 fine he was issued after he slashed Calgary’s Johnny Gaudreau on Thursday. With just over four minutes remaining in regulation, we now have a Jets team with the lead in shots, but not the lead in the score. As this game continues, it would be really nice if the Zucker-Staal-Granlund line would show up. While I’m not sure what the lines would look like, it might be time to shake things up again. With under two minutes remaining, Greenway and Winnipeg’s Mathieu Perrault were sent to the box. We are now playing four-on-four hockey, until the Jets pulled Hellebuyck for the extra attacker. On a tough fight for the puck along the boards by Parise, he was able to clear the zone, pass it to Eric Fehr for the empty net goal. I’ll admit, I didn’t see this result, but I’d be a fool to not be happy about a 3-1 win in Winnipeg.

D – Filip Johansson (Leksands IF, Allsvenskan) ~ it is pretty tough not to read into the fact the young defenseman did not make the Team Sweden roster for the World Junior Championships.  Yes, Sweden is a loaded team but a quick look at the stat line might make you understand why they told the small-ish, finesse defenseman to stay home.  Through 28 games in Sweden’s 2nd tier league, the Wild’s top pick in the 2018 draft has no goals, a single assist, 20 PIM’s and is a -10.

D – Simon Johansson (Almtuna IS, Allsvenskan) ~ meanwhile the team’s other Swedish prospect defenseman is having a slightly more eventful season in the 2nd tier league.  On loan from Djugardens and playing for Almtuna IS he has 3 goals, 10 points, 18 PIM’s and is a -7 in 31 games.

RW – Nick Swaney (Minnesota-Duluth, NCHC) ~ the former Lakeville South star had a solid game on Friday night with the game winning overtime goal and an assist with 8 shots in the Bulldogs’ 4-3 win over in-state rival Minnesota State.  Swaney has 5 goals, 11 points, no penalty minutes and is a +5 in 15 games.