Johan Camargo: The Bat the Braves May Need 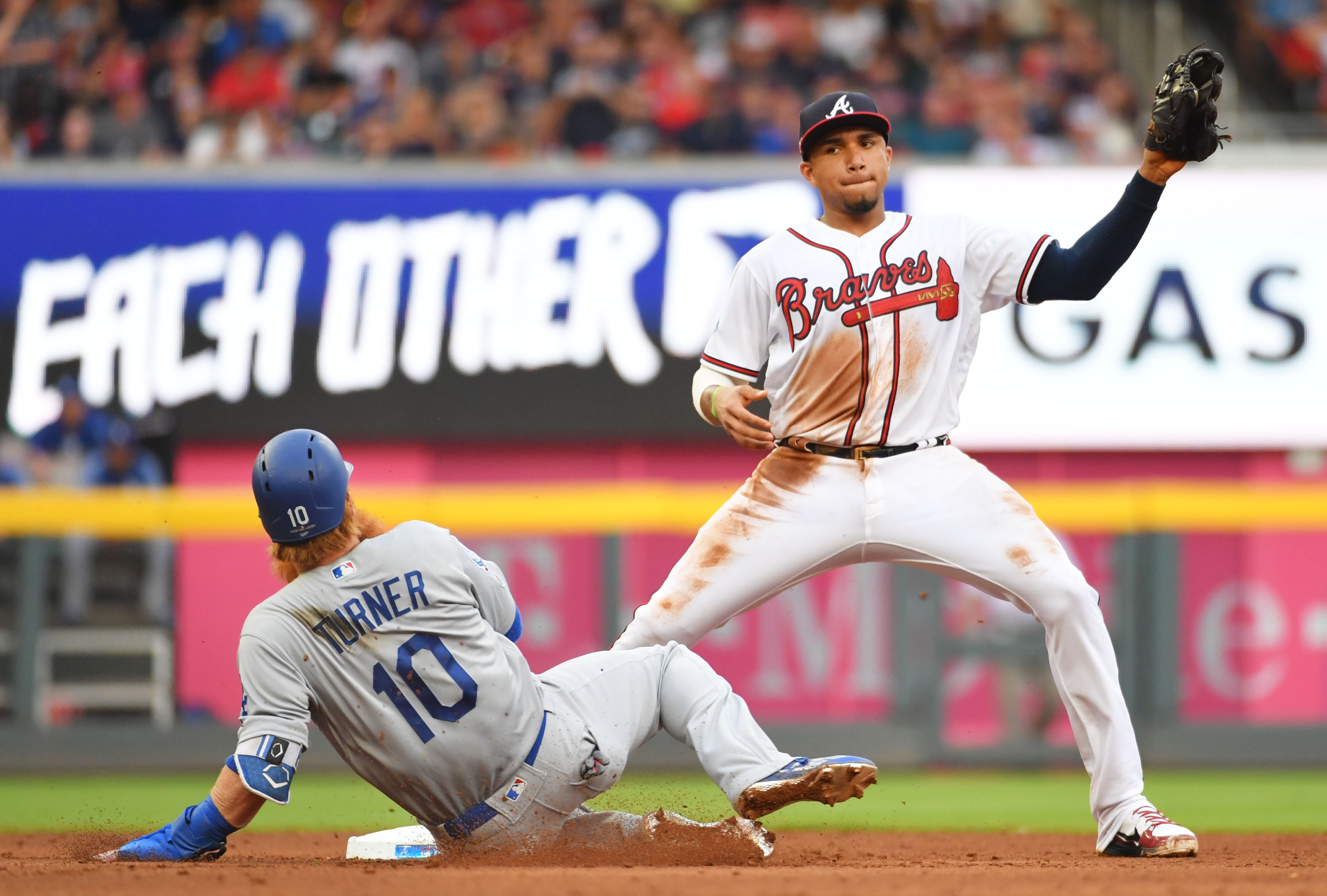 Johan Camargo: The Bat the Braves May Need

Much has been made about the slow offseason for the Braves, though fans seem to have forgotten the addition of one of the best hitters on the free agent market in Josh Donaldson. Atlanta also added Brian McCann, but as 2019 opens, Atlanta remains short an outfielder and could still use some punch in the lineup. But what happens if we don’t see that big move? What if the Braves simply roll the dice with Adam Duvall and pray that Christian Pache surprises everyone or Austin Riley looks Ryan Klesko-acceptable in the outfield? What should the lineup look like?

Well, it should include Johan Camargo and not in the outfield.

Listen, I’m open to the idea of Camargo playing the outfield here-and-there. I have my concerns as his sprint speed is about on par with Rhys Hoskins, whose defense in left field for the Phillies last year was Evan Gattis-bad. And yes, there is a difference between Ryan Klesko-acceptable and Evan Gattis-bad. That said, speed ain’t everything and Nick Markakis was only slightly quicker than Camargo in 2018 and he won a Gold Glove! Granted, the stats don’t support that award, but that sounds too much like facts. It feels nice to say Markakis was a Gold Glove winner. Maybe Camargo could be in the outfield as well?

But there’s the rub. Camargo, unlike Markakis, isn’t a career outfielder. To borrow a quote from Moneyball, outfield is the moon to him. He’s played one inning in left field total in the minors, majors, or even winter league ball. It’s just not something he was ever asked to do. Expecting even Klesko-acceptable level defense could be too much.

Here’s where you say, “but what about them analytics?” And they do help. Atlanta has quickly became one of the premier teams in player positioning and with the right pitching coach helping their young arms pitch with defensive positioning in mind, that may only help. But range is still range. We can try to mitigate its impact, but especially in the outfield where the players are a shouting distance away from one another, range is still important. And the Braves just so happen to already have an outfielder with good range in Adam Duvall.

But he didn’t hit after the Braves acquired him. And certainly, he isn’t the most ideal pick. Neither is bringing back Markakis, although he is a popular choice. I recently covered Markakis in a column and came away with a pathway back to the Braves that could be beneficial for the team, but only after the Braves upgraded offense at another position. It takes away the pressure for Markakis to be more than he has been for much of the last decade – a complimentary player who adds depth to your lineup. Expecting a higher level of production would be a mistake, I believe. He is unlikely to repeat the first half performance from last year.

However, what’s the best direction for the Braves if they don’t make a substantial upgrade to the lineup from outside the organization? Just hope-and-pray?

Or take action and bring back a former starter into the mix with Johan Camargo? But I just said that the idea of him starting 140 times in the outfield worried me, didn’t I? Yes, I did. But in my dream scenario in the event Atlanta doesn’t upgrade the offense elsewhere, Camargo would become an everyday starter not at a position he has next-to-no experience at, but at a position he has played nearly 700 innings professionally at. In this scenario, Camargo would become the everyday second baseman while Ozzie Albies would move over to short. We’ll get to Dansby Swanson in a second, but let me cover why I choose to not make the simple Camargo-for-Swanson swap.

Again, analytics are great for defense, but shortstop remains the position where you want the guy with the best range. Despite the fact that Camargo often replaced Swanson at shortstop over the last two years – or more recently Charlie Culberson – Albies is the better option. I can only assume Atlanta didn’t want to upset their regular lineup when Swanson wasn’t in the lineup, but if Albies is the regular choice, it can work out. Albies came up as a shortstop, has a better first step than Camargo, and the range to play shortstop. His arm strength, while not on par with Camargo, is plenty good enough to make the tough throws needed.

The Braves will limit the loss on defense with Albies moving over to short and they will get a big boost at the plate. Of the eleven Braves with at least 400 PA the last two seasons, only three had a better wOBA than Camargo and his .341 mark. It’s eight points higher than Markakis, eleven points better than Albies, and 57 (!) points higher than Swanson. It’s hard to justify keeping Camargo on the bench with his .799 OPS the last two seasons when you’re playing Ender Inciarte (.733 OPS) and Swanson (.667 OPS) plus not knowing what you’re getting from a corner outfield slot.

As for Swanson and his legions of fans that just unfollowed me on Twitter, I’m still a Dansby fan. I haven’t given up on him. However, the Braves are no longer rebuilding. You aren’t just given a spot in the everyday lineup anymore on the potential you have to be better. You have to earn it and while Swanson made huge strides in the field, his struggles at the plate only continued. He still has options and a trip to Gwinnett wouldn’t be the worst thing. Explain to him that you still believe in him and you are just giving him a chance to find his way in a lower-pressure situation. Let him know that if his bat wakes up, he’ll be back in Atlanta by the summer and you can try again to move Camargo into a super utility role.

What about right field? Well, that remains a question mark. The Braves could bring back Markakis for a year, though I’m of the belief that if Atlanta wanted to do that, Markakis would already be signed. Unlike the situation on the outfield, it’s pretty easy to find options for a corner outfield spot. While many hate this pick, I suggested Curtis Granderson last month as part of a platoon with Duvall. Yes, this is not ideal, but as I pointed out, his “119 wRC+ against right-hand pitching over the last three years” is “eleven points higher than Markakis.” And while the Braves have Swanson figuring it out at shortstop in Gwinnett, they can also have Austin Riley getting plenty of innings in the outfield down in Triple-A. He could turn into the best possible option and push the Granderson/Duvall platoon to the side.

By the way, if you’re a fan of the intangibles, Granderson’s a three-time winner of the Marvin Miller Man of the Year Award.

In the meantime, you keep Camargo’s bat in the lineup. Of course, the more simplistic – and frankly, the best – idea is to just upgrade in right field to the point that you don’t need to worry about not having enough thunder in the lineup. But should that not happen, the Braves would be foolish to keep Camargo on the bench. Also of course, possibly Camargo takes to the outfield better than I expect. In that case, you could justify playing him in right field for the time being. Like I said, I have my doubts, but as shocking as this may sound coming from me, I don’t know everything.

But Camargo at second base with Albies at shortstop? That, my friends, should work just fine while the Braves figure out what to do in right field. Meanwhile, Swanson can hopefully figure out what he needs to do at the plate. The perfect result in this equation is that Riley shows some aptitude for the outfield and Swanson starts showing the 120 wRC+ bat we always felt he was capable of while Atlanta uses their funds to upgrade their pitching. Certainly, all of that is possible and there’s no reason to give up completely on Swanson.

There’s also reason to drop him from the everyday lineup. Those reasons only become louder if Swanson’s bat continues to struggle.