Final Grades for the Packers Offense 2018 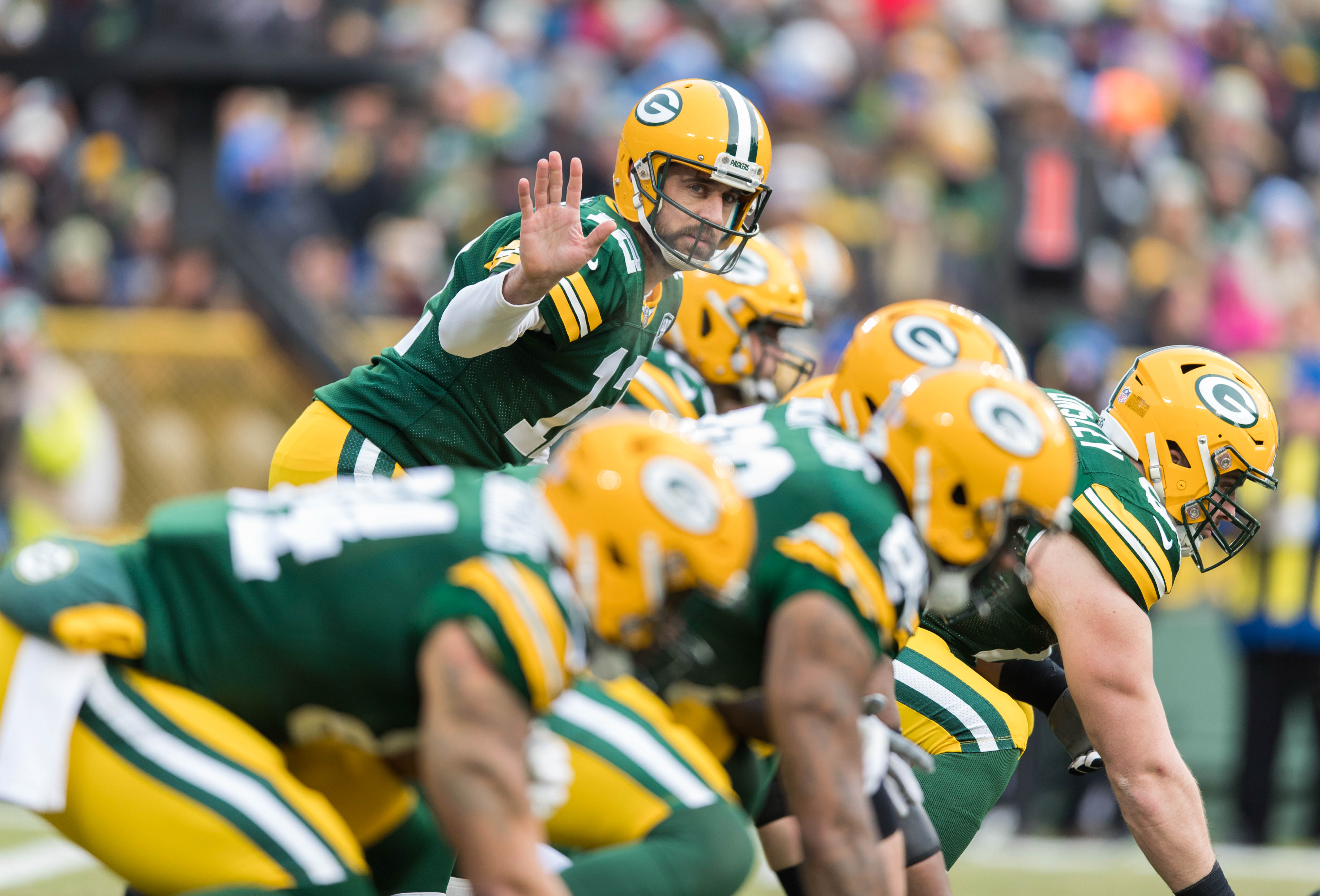 Final Grades for the Packers Offense 2018

The Green Bay Packers had plenty of offensive talent on their roster in 2018. Aaron Rodgers is a future Hall of Famer and an elite quarterback. Davante Adams made the Pro Bowl for the first time in his career and David Bakhtiari was named All-Pro at the end of the season.

Still, the results were often disappointing. The offense failed to move the ball consistently and struggled extensively on third downs throughout the season.

Here are the grades for the Packers in 2018. The marks are based on a combination of expectations and performance. Grades are listed for position with each player’s comments and analysis following inside each position group.

Aaron Rodgers suffered a knee injury in Week 1 and didn’t really hit his stride all season. His completion percentage (62.3) and yards-per-attempt (7.4) were well below expectations. He threw 25 touchdowns, less than two per game, and threw only two interceptions.

There was clearly tension between Rodgers and head coach Mike McCarthy which hurt the offense and the team.

Rodgers held the ball too long at times and often tried to make splash plays downfield instead of completing check downs which would have helped keep drives alive. That was one reason for the team’s struggles on third down all season.

It doesn’t seem like Rodgers is physically declining, but a new coach whose system he believes in will probably help recharge his battery.

Backup DeShone Kizer didn’t show much in limited action. He completed fewer than 50 percent of his passes and threw no touchdowns and two interceptions. Kizer still must prove he can be an effective backup in this league, something he didn’t really show this year.

The Packers finished 22nd in rushing yards per game, but they were able to run the ball effectively when they did run it. The fact that they were often playing from behind limited the team’s opportunities to emphasize the rushing game.

Aaron Jones missed the first two games of the season due to suspension and the final two contests due to a knee injury. In between, he showed his potential, carrying the ball for 728 yards and eight touchdowns. Most impressively, Jones averaged 5.5-yards per carry. He has the potential to be a 1,000-yard rusher and a difference maker if used properly.

Jones showed improvement in pass catching and blocking over the season but can still get better in these areas.

Jamaal Williams is consistent and steady. He excels at blitz pickup and he is a solid receiver out of the backfield. Williams had his best game against the Jets in Week 16 and is the type of player every coach wants on his team.

No other running back saw major action after Ty Montgomery was traded. Kapri Bibbs grew up a Packers fans and got to live out his dream by playing at Lambeau in the season finale. Danny Vitale saw spot duty late in the season.

Davante Adams deserved his Pro Bowl berth and proved he was an elite NFL receiver this season. If not for a knee injury that prevented him from playing in the final game, he almost certainly would have set the franchise record for receptions in a season.

Adams is a quality red zone threat, can get deep and go over the middle. He uses his size and body control to win contested balls. His performance this season is even more remarkable when you consider that Rodgers didn’t trust many of his other receivers.

Randall Cobb had an outstanding season opener but struggled to stay healthy and played in only nine games all year. Cobb is the team’s best slot receiver, but his effectiveness was limited by injuries this season.

Geronimo Allison looked good as the third receiver early before injuries limited him to five games. Next year should be his chance to show how much he can do in this league.

Rookies Marquez Valdes-Scantling and Equanimeous St. Brown both showed promise and times and looked like rookies at other times. Valdes-Scantling shined earlier in the season with St. Brown coming on later. Rodgers had difficulty trusting them both for most of the season and his lack of practice time in preseason and due to his injury didn’t help. J’Mon Moore rarely saw the field on offense and caught only two passes all season. Jake Kumerow had a great training camp and got his chance late in the season. He has size and smarts and gets the most out of his ability. The Wisconsin-Whitewater alum was a feel-good story who deserves a chance to continue his NFL journey.

Jimmy Graham was a disappointment this season. The Packers shelled out big bucks for Graham, but he was very pedestrian. Graham scored only two touchdowns and struggled to separate from defenders downfield. The result was a player who was paid like an All-Pro but played like a journeyman.

Lance Kendricks saw a lot of action as an H-Back and caught 19 passes on the season. He dropped a few more than you’d like to see but was steady most of the time.

Marcedes Lewis was expected to play a big role as a blocker but rarely saw the field and caught only three passes all season. It is unlikely either Kendricks or Lewis will return in 2019.

Robert Tonyan had one big moment, a long touchdown pass against Seattle, but otherwise didn’t see the field much. He has pass catching potential but must improve his blocking to see the field more often if he is the backup.

The line allowed a lot of sacks but that was due in part to Rodgers’ habit of hanging on to the ball too long to try to make big plays downfield. Overall, the pass blocking graded out fairly well.

David Bakhtiari earned a berth on the All-Pro team but was snubbed for the Pro Bowl. He is arguably the best pass-blocking tackle in the game today and deserves the accolades he has received.

Bryan Bulaga struggled to stay healthy but when he is available, he is a quality tackle. The line was not as good when he wasn’t in the lineup. Jason Spriggs hasn’t lived up to his draft position and struggles in pass protection, something the Packers can’t really afford.

Center Corey Linsley is very consistent and smart. He played at near a Pro Bowl level all season despite the struggles of the players on either side of him.

Lane Taylor is a good run blocker but needs to improve his pass blocking. Taylor was also hampered by injuries this season but often played hurt.

Right guard was the biggest area of concern on the line this season. Justin McCray started the season there but didn’t always pick up his assignments and eventually lost the job. Byron Bell is versatile and a leader but cannot start for long periods of time without being exposed. Lucas Patrick showed passion and enthusiasm but still needs to prove he’s capable of starting in this league.