Islanders get much needed bounce-back win over the Lightning 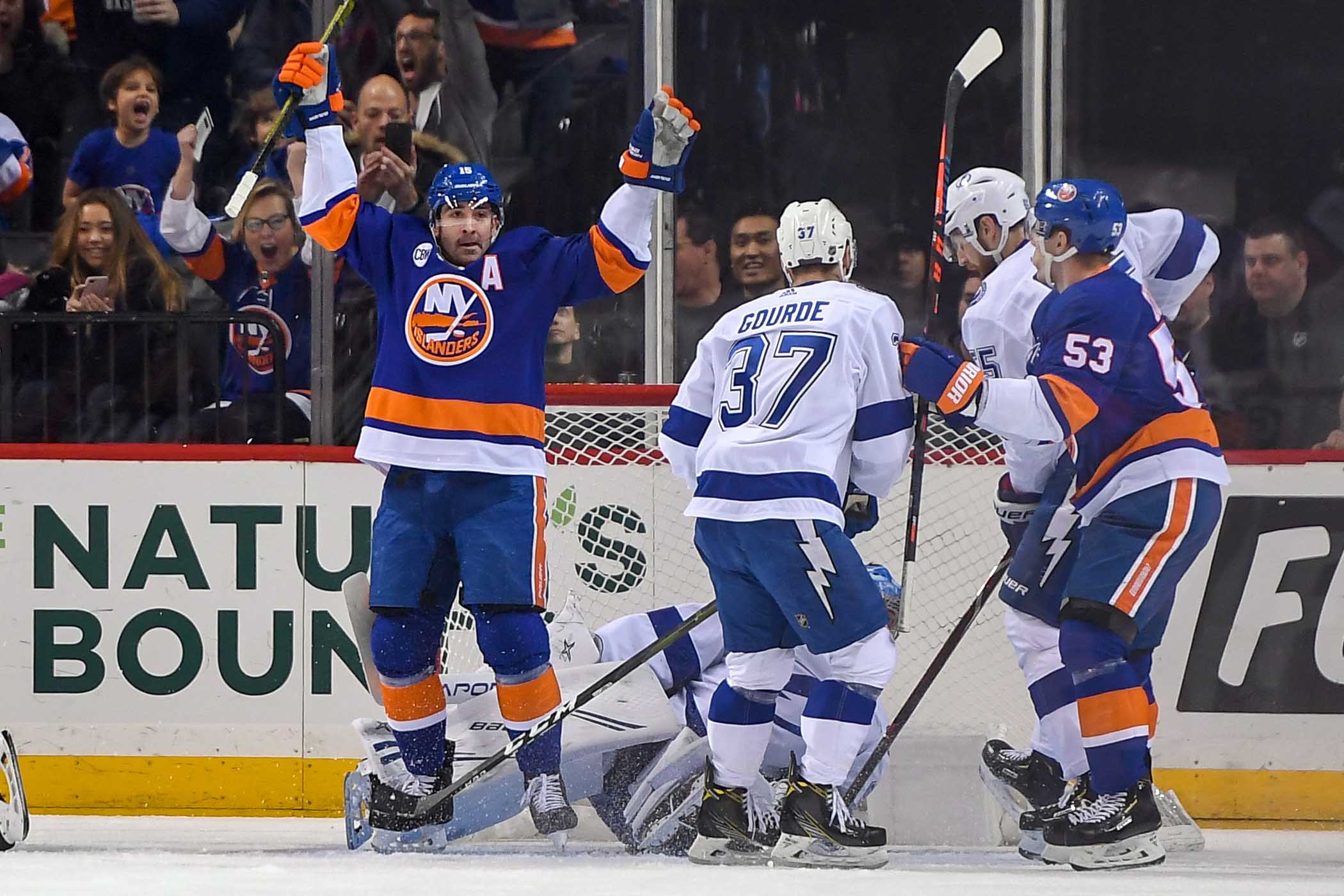 Islanders get much needed bounce-back win over the Lightning

After a stretch of four games where their effort hadn’t been all there, the Islanders turned things around on Sunday night scoring five times in a 5-1 victory over the NHL leading Tampa Bay Lightning. The win moved the Islanders back into the first wild-card spot in the Eastern Conference and they sit two points behind the Penguins with a game in hand.

“Good win for our team against the best team in the league,” said Matt Martin, who finished the night with a pair of assists. “We beleive we’re a playoff team and this was a good test. Obviously, we haven’t been playing our best hockey over the last four games. We were able to sneak away a couple of wins, but I think overall we were pretty good tonight.”

.@mattymarts17 was the 1st Star of the Game & talks with @Shannon_Hogan about the #Isles HUGE win over the Lightning!!! pic.twitter.com/XWjciBPGC4

The Lightning did finish the game with 39 shots on net, but Greiss was there to make the big stops when the Isles needed them and ended the game with 38 saves. It was Greiss’ sixth time this season allowing just one goal against.

“Yesterday we left the rink with a bitter taste in our mouths,” Casey Cizikas said. “Today we did a good job of rebounding and staying the course. Even when they had pressure, we were kind of sitting back and we had big saves from Greisser at key times. We continued to push forward.

“To beat a team like that of their caliber it definitely speaks to the character in this room.”

The win felt like a much-needed one for the Islanders, who had been struggling in the leadup to Sunday. They had dropped a sloppy game to the New York Rangers the day before at Barclays Center and played another ugly game on Thursday in Manhattan against the Rangers.

They dropped their Tuesday contest with the Carolina Hurricanes at Nassau Coliseum and stole a game from the St. Louis Blues the previous weekend.

“We know how to play. We can shut certain teams down,” Barry Trotz said. “When we play the right way we can take a lot of the offense out of teams. I thought we did that early. The second period we got a little bit loose and need a couple of penalty kills and all that. Third period I thought we had the right attitude.”

“When we play the right way, we can take a lot of the offense away from teams… In the back-to-back I think you have to simplify sometimes.” #TBLvsNYI pic.twitter.com/4tHveBzXz8

The win moved the Islanders to an impressive 6-0-0 on the second game of back-to-backs. The Islanders penalty kill was also a perfect 6-for-6 on Sunday against the league’s best power play.

The Islanders were also 1-for-1 on the power play.

It Was Brock Nelson’s goal 1:21 into the game with the Islanders on the man advantage that opened up the scoring. A wrist shot from the slot beat Andrei Vasilevskiy over his right shoulder to make it a 1-0 game.

Cal Clutterbuck made it 2-0 at 4:27 of the first period when he scored off a pass from Martin. Devon Toews recorded his third NHL goal 16 seconds later to make it 3-0.

Cizikas scored his 11th goal of the season when he snuck a shot through Vasilevskiy at 11:03 of the second period. Tampa Bay broke up Greiss’ bid for a shutout at 18:12 of the second when Ryan McDonagh found the back of the net.

Jos Bailey recorded his 10th goal of the season on an empty net with just under a minute left in the game.

“It just shows what type of team we are when we play the right way,” Cizikas said. “How successful we can be. When we don’t play the right way it’s ugly hockey and it’s not pretty. Tonight was a true test and I think the guys answered.”