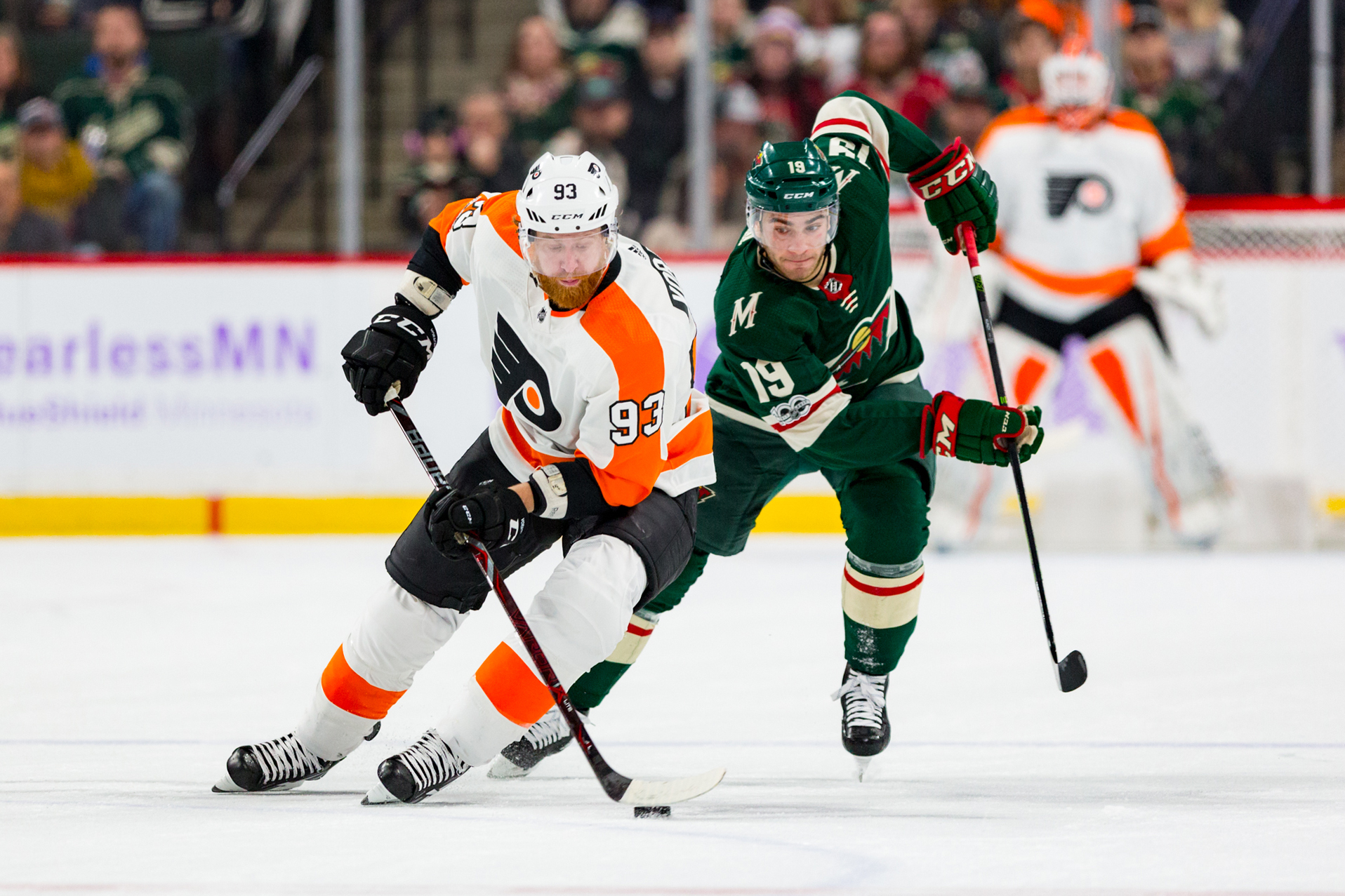 More on that in a little bit.

11 years earlier, the Atari released the game E.T. the Extra-Terrestrial based on the blockbuster Steven Spielberg movie for their ever popular Atari 2600 game console.  The game was considered to be such a major disappointment it almost single-handedly was blamed for the video game crash as outraged gamers swore off their system over the feeling of being exploited. Atari was so embarrassed by the game it literally buried 800,000 games in an Alamogordo, New Mexico landfill.  I wonder if that level of shame the Minnesota Wild felt about its game against Detroit on Saturday?

If not, it should have been that ashamed.  In a game Wild Head Coach Bruce Boudreau called the “worst game he has coached since he’s been here”, Minnesota was thoroughly outplayed, outcompeted and outworked by a Detroit team that was on the 2nd game of a back to back.  Instead the Wild looked like the tired, mostly unmotivated club and was completely dominated in a 5-2 loss.  Team alternate captain Ryan Suter said, “They were skating. We weren’t…we seem to play our best when we’re playing the best. We have to change that.”  Really Ryan?  Isn’t that what you and your teammates are paid thousands or even millions of dollars per year to do?  As a friend of mine who is in the audio engineer profession says, you’re only as good as your last show.  So how good is this Wild team, really?

That’s the question Wild fans are mulling out loud via social media or into local radio shows.  With a team that can beat one of the best teams in the Central Division one night and then after a day of rest play so poorly against one of the worst teams in the league at home you really wonder if this team is just a glorified pretender.  And by pretender, I mean to even make the playoffs.  Very few fans seem to think this team is anything but a one-and-done playoff team at best.  Ouch.

The team’s scoring struggles, due in large part the underperformance of many of its highly paid forwards save Zach Parise and Mikael Granlund have meant the team hasn’t provided enough goal support for Devan Dubnyk to win games on a consistent basis.  While Charlie Coyle and Jason Zucker have had flashes of improved play recently, both are still not finding the back of the net with enough frequency to make a difference.  Eric Staal has been stone cold and looks tired despite leading the team in shots on goal with 133.

On defense, Suter may be the team’s top scoring defenseman but that might be due to point inflation as 18 of his 28 points are secondary assists.  I am sure Ryan Suter apologists would love to ‘bury’ that fact.  The real offensive workhorse in the absence of Matthew Dumba is Jared Spurgeon who has 17 primary points (goals and primary assists) out of his 26 total points.  The rest of the Wild blueline simply hope not to make any costly mistakes rather than chipping in offensively.  Dubnyk will likely get the start since the Wild have a day of rest and I think Boudreau will probably use Alex Stalock tomorrow against Los Angeles.

On the flip side, I’d expect Carter Hart to get the start against the Wild since he’s really the best goalie the Flyers’ have.  Philadelphia is coming off a 3-2 loss to regional rival New Jersey on Saturday.  The Flyers are 1-7-2 in their last 10 games and can’t wait for this nightmare of a season end.  ‘New’ Flyers General Manager Chuck Fletcher has his work cut out for him as his team will likely be looking to trade some veterans as they look to rebuild.

Yet, the Flyers still have some dangerous weapons.  Claude Giroux is having a strong season and has the ability to create offensive chances on his own.  Jakub Voracek is a skilled set up man if you give him time and space to work with.  Sean Couturier, who once heard his name called in St. Paul at the 2011 NHL Entry Draft had a hot start offensively but has cooled off but is one of the better defensive forwards on the team.  And when motivated Wayne Simmonds can be quite the handful in and around the net.

On the blueline, the Flyers have some quality puck moving defenseman in Ivan Provorov and Shane Gostisbehere who are legit threats from the point.  The rest of their defense is youthful with a dose of physicality as hitting machine Radko Gudas and former Wild defenseman Christian Folin will no doubt want to light up some of his former peers.

So remember Night Trap earlier in the article?  If you’re not familiar with the controversial game that featured full motion video as sort of an interactive movie, the plot was pretty hokey.  The plot was about a surveillance team that was investigating the disappearance of 5 high school-aged girls from the home of Mr. & Mrs. Victor Martin.  In the game, you act as a member of S.C.A.T, Special Control Attack Team where you monitor various cameras that have been put in place in the home to look out for the bad guys as they have 5 more high school girls and your goal is to activate ‘traps’ to stop the bad guys.  The acting and plot is notoriously bad and is kind of a cult classic in the retro gaming community.

So why the controversy?  The game drew the attention of Congress because of the subject matter of the fact it involved high-school girls; and the implied violence against them.  The fact the high school girls often wore sports bras or just a towel at times also took the game to a kind of creepy place.  Congress didn’t ban the game, but the game only ended up on the PC and Sega CD.  So why am I bringing it up?

This game is a classic trap scenario for a Minnesota Wild team that got ‘trapped’ by the Red Wings on Saturday.  Like Detroit, Philadelphia is another team that is in last place in its respective division and struggling mightily to win games.  The Wild either were overconfident or unfocused on Saturday and knowing the Flyers are another bottom feeding club might make them feel as though they can simply show up and win.

So what will be keys to victory this evening?

1.  Be ready to play and move your feet – the Wild were very sluggish from the start of the game on Saturday and the result was the Red Wings jumped out to a 1-0 lead that had Minnesota chasing for the rest of the game.  Minnesota must come out with energy and must not let Philadelphia believe they have a chance.  The Wild have a reasonable record when giving up the 1st goal, but it would be to their best interest to play with a lead.  The longer this game goes with the score tied or just a one-goal lead the more likely the Flyers are to play the role of spoiler.  Not only will moving their feet help the Wild offensively, but hopefully draw some penalties to take advantage of Philadelphia’s weak penalty kill.

2.  Crash the net and keep it simple – Minnesota was often its own worst enemy against the Red Wings.  It kept attempting low-percentage passes that resulted in easy turnovers and squandered potential scoring chances in the process.  Minnesota needs to funnel as many pucks on goal as it can and also crash the crease to make Carter Hart (or whoever is between the pipes for the Flyers) uncomfortable.  If the Wild simply settle for perimeter shots, it will build his confidence and likely mean we’ll keep the game closer making the Flyers feel they have a chance to earn a win.

3.  Play with urgency and a killer instinct – Wild fans are tired of watching this team coast and also tired of watching the team ease up; especially in the 3rd period of games.  Fans want to see this team play with the urgency one would expect from a team living on the playoff edge as they are, and when it finds itself with the lead to continue to apply offensive pressure instead of just circling the wagons in their own end.  It doesn’t mean play recklessly, but it also doesn’t mean playing rope-a-dope and hoping to escape with a win either.

What do you think are the keys to a Wild victory?  Tell us on Twitter @CreaseAndAssist or in the comment section below, oh and one last thing…