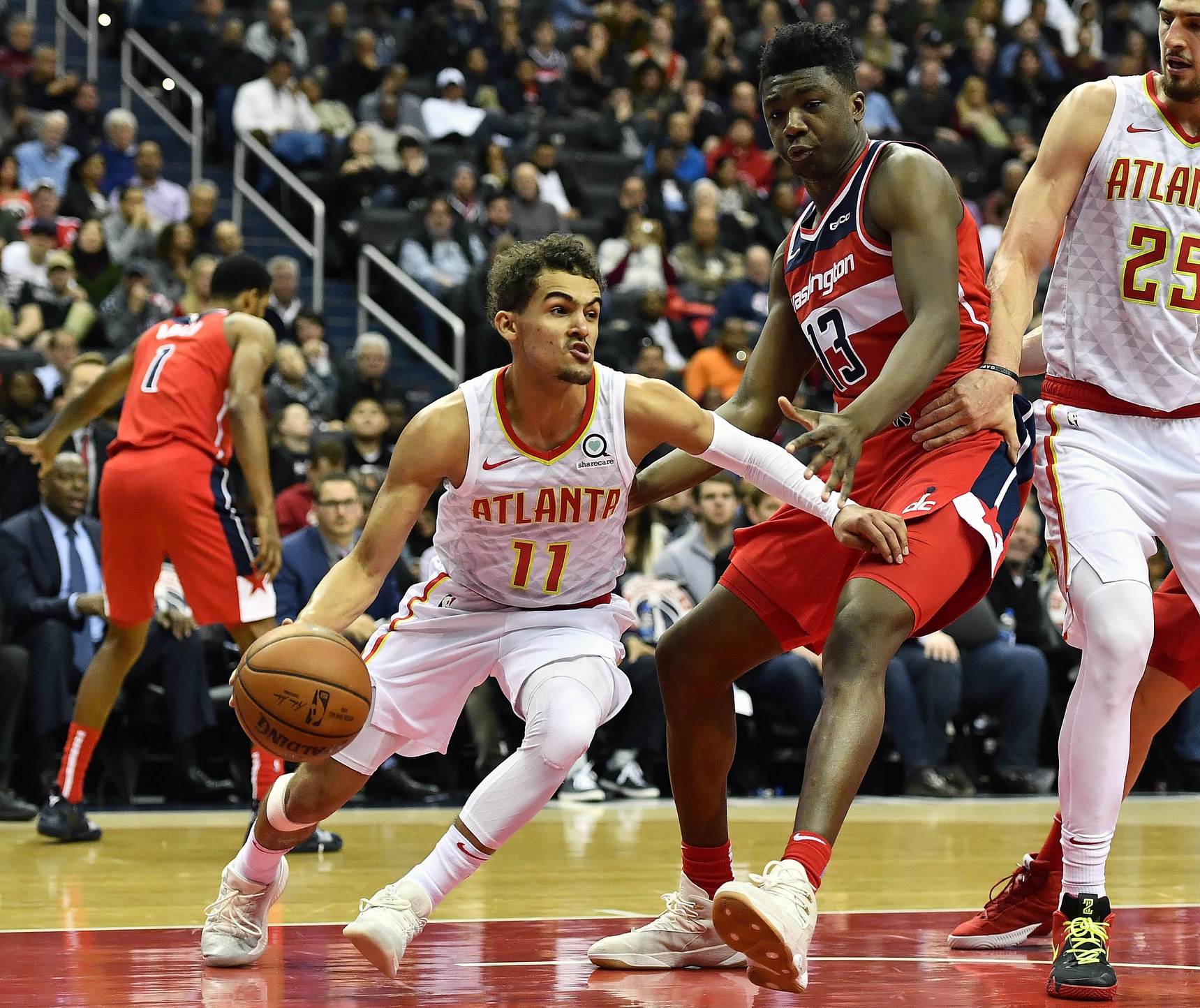 We’re just past the halfway point of the 2018-19 regular season, as all 30 teams have played at least 41 games. Since our first quarter edition of the Powerless Rankings, Houston, San Antonio, Miami and Brooklyn have worked their way up the standings, while Memphis, Dallas, Detroit and Orlando have taken a step back into lotto-land. Let’s get right to it.

Sporting the same record as the eighth-placed Lakers, the Jazz appear poised for another playoff run. Utah has won nine of the last 13 games, and Donovan Mitchell is just starting to heat up after an abysmal start to his sophomore season. Among the 14 teams sitting on the outside of the postseason picture, the Jazz have to be considered favorites to upset the current order. The margin for error is minimal, maybe even non-existent, but Utah is right on the cusp. Last year’s late-season run and first round toppling of the Thunder doesn’t matter today. Yet the Jazz seem determined, if not destined, to shoot up the standings once again.

We (you know, the royal we) have been waiting weeks for Dell Demps and the Pelicans to make a win-now move and cash in their 2019 first round pick for a decent 3-and-D wing. To paraphrase The Wire’s Lester Freamon, life is the stuff that happens while you’re waiting for moments that never come. Time is running out for New Orleans. Now healthy for the first time since the opening stretch of the season, the window of opportunity to appease Anthony Davis is slowly shutting. Perhaps this squad will still string together a streak of strong play similar to what we saw last year when the Pelicans were hovering around .500 at the halfway mark. But if Demps does indeed have a deal in the works, he’d be wise to pull the trigger before it’s too late.

With Tom Thibodeau no longer at the helm, the Timberwolves are back to having fun. Minnesota will need Robert Covington to return sooner rather than later if this team is serious about sneaking into the playoff picture. Regardless, Karl-Anthony Towns is making strides defensively and has been an absolute monster lately, even dominating Anthony Davis in Saturday’s hard-fought victory over the Pelicans. Tuesday’s tilt against Jimmy Butler, Joel Embiid and the Philadelphia 76ers will be a must-watch matchup.

Memphis has lost 12 of the last 15 games, falling to 14th in the Western Conference. With news that Kyle Anderson is on the shelf for the next two-to-four weeks, the Grizzlies are likely to continue losing more often than not, though recent acquisition Justin Holiday could help weather the storm along the wing. So why didn’t this team plummet father in these rankings? Most agree that Luka Doncic is the runaway favorite for Rookie of the Year, but I’m still confident about my pre-draft prediction that Jaren Jackson Jr. will ultimately be the best player from the 2018 draft class.

It didn’t take long for Luka Doncic to become the Don in Big D, and reputable sources like Steve Kerr say he’s already an All-Star. While Doncic is a long-shot to earn that honor as a rookie in the loaded Western Conference, Mark Cuban’s recurring master plan to sign big-name free agents (besides DeAndre Jordan, Harrison Barnes and Chandler Parsons) is finally feasible. As far as this season goes, J.J. Barea tearing his Achilles is a bummer and hurts their playoff odds, but on the bright side rookie Jalen Brunson seems ready to step up and keep the second unit humming.

The feel-good story of the season, or at least one of the best ones, remains the same. Sacramento is delightful, running circles around the opposition on a near-nightly basis. All good things come to an end, but the Kings aren’t hearing it. This club refuses to quit. The longer Sacramento stays relevant in the playoff race, the more hope they inspire for the future. Here’s to hope.

Blake Griffin breakout aside, the Pistons are disappointing and déjà vu-inducing. For the second straight season, Detroit has pooped away a strong start. After going 13-7 through the first 20 games, the Pistons have dropped 16 of the last 21, falling to ninth in the Eastern Conference. Last year, Detroit won 10 of the first 13 and looked like a playoff lock at 14-6 through the first quarter of the campaign, only to finish 39-43 (ninth in the East).

To the surprise of no one, the lack of spacing (29th in three-point shooting percentage) is haunting the offense, which ranks 23rd (105.9 points per 100 possessions). Detroit is in the top half of the league in both three-pointers made (11.2 per game, 14th) and attempted (34.0 per game, seventh). But beyond Griffin, Reggie Bullock and Luke Kennard, there’s not another regular rotation player connecting at a league average rate.

The only good news, apart from Griffin’s continued growth, is that the Pistons still possess their first round pick. Whether this club sneaks into the playoffs or not matters little. Whether the front office adds outside shooters this upcoming offseason (or before the trade deadline) is far more important. For better or worse, Detroit is all-in on the duo of Griffin and Andre Drummond. Now it’s about giving them a shot to succeed.

I don’t understand the rush to write off Trae Young just because Luka Doncic is dominating. Doncic played professionally against grown men for years and thrived against NBA players in international competition. That alone made him much more likely to adapt quickly. So what that Young is six inches shorter, six months older, and tasting less success at the start of his NBA career? We’ve been spoiled by ridiculously good rookies lately. Last year it was Ben Simmons, Donovan Mitchell and Jayson Tatum. But low and behold, De’Aaron Fox is crashing the party as a sophomore. The Human Torch didn’t make his NBA debut until 21 years of age, and while I’m not saying Young will ever prove worthy of such a lofty comparison, I’m suggesting some semblance of patience from the peanut gallery.

The Knicks have lost four in a row and 12 of the last 13. There’s enough scrappiness, reclamation and promise to keep me vaguely interested though. Kevin Knox was cooking against the Sixers on Sunday, nearly leading New York to an improbable comeback behind a career-high 31 points. If James Dolan sells the team, I’m cool with commissioner Adam Silver following in David Stern’s footsteps (i.e. rigging the lottery for the Knicks). Zion Williamson and Kristaps Porzingis pick-and-pop, please!

The Magic won’t go away. With just a half-game separating Orlando from Charlotte (19-23) in the race for eighth and four of the next six opponents (Brooklyn twice, Detroit, Washington) part of the same depressing race for the final few Eastern Conference playoff spots, the next couple weeks could make or break this team even before the trade deadline. Nikola Vucevic is delivering an MVP-caliber campaign, but it’s time for the Magic to trade him. Aaron Gordon, Jonathan Isaac and Mo Bamba should be splitting most of the minutes at power forward and center. It’s not too late to embrace a rebuild (and tank). They could easily finish with the sixth-best odds at landing Zion Williamson, though the front office will need to act quickly.

Everybody is eating again, and the Wizards are only two games behind the Hornets (19-23) for the eighth spot in the East. But Scott Brooks continues to befuddle. Thomas Bryant is balling. He deserves more minutes pronto. No, yesterday. No, weeks ago. Since accomplishing something done only by Wilt Chamberlain (posted 31 points on 14-of-14 from the field to go with 13 boards back on Dec. 22 versus the Suns), Bryant has made at least 50 percent of his field-goal attempts in all 11 tilts while tallying three double-doubles. He’s five-of-nine from beyond the arc during the same stretch. Yet Bryant has seen 30-plus minutes in only four of these last 11 contests. Thomas has been a tank engine, but he doesn’t think he can, he knows he can. Play the man!

The Suns have won two of the last three games despite Devin Booker (back) being sidelined. Double-double machine Deandre Ayton’s defensive concerns still linger long-term. But Phoenix is doing a good job of surrounding Booker and Ayton with capable stoppers in De’Anthony Melton, Mikal Bridges and Kelly Oubre, who has been outstanding since escaping the nation’s capital. This ranking is admittedly pretty harsh all things considering, but the Western Conference is one heck of a mountain to climb.

Losers of seven straight, the Bulls are a bad basketball team. There’s some talent in tow (Wendell Carter Jr., Lauri Markkanen, Zach LaVine). Still, it seems like the only one capable of saving this woebegone franchise is Zion.

Cleveland snapped a 12-game losing streak last night, beating the LeBron-less Lakers. Still, the Cavaliers are unlikely to lose their status as most powerless between now and the end of the season, and this might be the only franchise not even Zion can save. With the trade deadline approaching, it’ll be interesting to see whether they make some more moves.