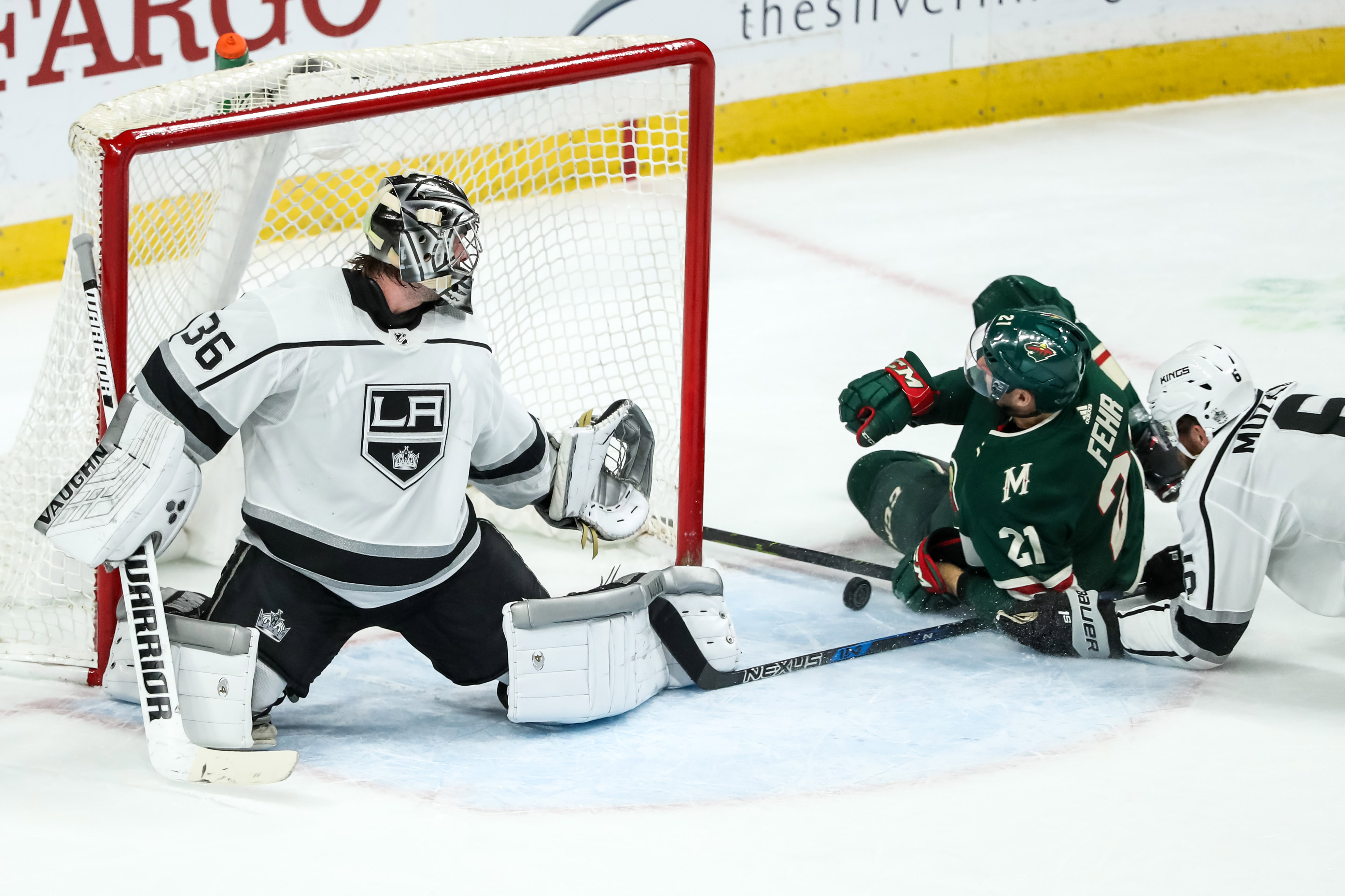 If Saturday’s loss to Detroit hit the Wild like a person stubbing their toe on the coffee table, then Monday’s loss to Philadelphia was like having a house in a floodplain and seeing the nearby river start to reach your front yard.  Yes, its panic time for many Wild fans and a quick perusal around Twitter the general feeling is this club is a lost cause.  Fans are not only disheartened by the losses, but they’re tired of the empty rationalization and pledges from Wild players about needing to ‘be better’ etc.

Meanwhile, back in St. Paul, a well-rested Los Angeles Kings team watches film of the last two Wild games and is probably feeling emboldened.  The Wild are on the 2nd game of a back-to-back and feeling pretty dejected.  Will the Kings add to Minnesota’s misery or will the Wild finally rally for a much-needed morale-boosting victory?

1st Period Thoughts:  The Wild would force a turnover in the opening minute and that led to two quality shooting opportunities, both of which were dismissed by Jonathan Quick.  On the next shift, Eric Staal‘s wrap around bid was again stonewalled by Quick.  The Kings’ first shot came off the stick of Ilya Kovalchuk who ripped a shot from the right faceoff dot that Alex Stalock held onto.  The Kings would bottle Minnesota up in its own end and Stalock found himself besieged by a few perimeter shots that did have the benefit of traffic in front of his crease.  Minnesota tried to answer back, Jordan Greenway would win the battle for the puck along the wall and he’d send a pass towards the top of the crease where J.T. Brown got off a shot that Quick kept out.  A few minutes later Staal would feed a pass to Greenway who one-timed a shot that Quick steered aside.  The Wild seemed to be dictating the pace of play through the first half of the period as Charlie Coyle worked his way into the Los Angeles zone where Zach Parise picked up the puck and found Ryan Suter with a pass and he stepped into a slap shot that Quick blocked away with the leg pad.  Minnesota continued to create chances from in close as Nino Niederreiter was denied at point-blank range after a nice set up by Joel Eriksson Ek.  The Kings would have a nice scoring chance of their own as Brendan Leipsic was stopped on 3 shots in quick succession before Stalock was finally able to cover it up for a whistle.  With two clubs trading scoring chances but unable to score, the two teams started to trade hits instead as a sort of a high-low hit by Dustin Brown to send Zucker going head over tea kettle over Drew Doughty.  This drew the ire of Zucker who went back at Brown and gave him a big shove.  There was plenty of chirping going on between the two clubs as you seemed to hear a storm of chatter after each finished check.  Leipsic would make a nice backhand to forehand move but his shot was directed up and over the goal by Stalock.  It was a pretty even period, still 0-0 going into the 1st intermission.

2nd Period Thoughts:  The Wild would create a 3-on-1 less than 30 seconds in and Mikko Koivu fed a pass across to Zucker who pushed a shot wide of the goal.  Moments after that, Zucker and Parise had a few great chances but Quick was able to sprawl and eventually gather the puck with his blocker.  Minnesota kept attacking and a point shot by Suter would ring off the post and Quick would somehow sense where the puck was and he’d use his legs to keep it from crossing the goal line.  The play would be reviewed but it appeared clear from the replay the puck never crossed the goal line, and the officials affirmed their ‘no goal’ call.  The Wild would take the first penalty of the game as Joel Eriksson Ek was tagged with a slashing call.  Minnesota’s penalty kill had good puck pressure and only allowed one shot on goal during the Kings’ man advantage.  Minnesota would go back on the attack and Greenway would again be denied on another bang-bang play near the Kings goal as Quick continued to be razor sharp.  A few shifts later the Wild felt they had another golden opportunity as Parise chipped a puck by Alec Martinez but Quick denied his 5-hole attempt off the partial breakaway.  The Wild’s persistence would finally be rewarded as Nino Niederreiter would swing from behind the goal and then back out front just inside the faceoff dot before swinging a shot on goal that deflected off a few sticks and by Quick.  1-0 Wild.  The good feelings wouldn’t last long as the Wild would ease up and the Kings would strike as Los Angeles got Minnesota’s defense to back off giving Dustin Brown plenty of space to hammer a shot on goal and Kovalchuk pounced on the rebound.  1-1 game.  Minnesota would get its first power play late in the period but you wouldn’t know it through the 1st minute of the power play as the Kings’ Jeff Carter nearly cashed in on a 2-on-1 while shorthanded.  The Wild’s best chance came off a Niederreiter shot that Quick fought off and the period would end with both clubs knotted at 1-1.

3rd Period Thoughts:  The Wild tried storming the net early, but again Quick was able to sprawl and keep the puck out as he had Zucker and Koivu hacking away at the biscuit to no avail.  Minnesota was trying to apply pressure and force turnovers but the Kings were hoping to get the Wild to chase a bit too much and then counter attack.  The Wild kept finding ways to generate opportunities as Jordan Greenway was stoned on a shot from the slot by Quick who was really starting to frustrate Minnesota at this point in the game.  The Wild continued to persist and they would be rewarded as Ryan Suter stepped into a slap shot that bounced off Eric Staal and in.  2-1 Wild.  You could sense the anxiety in the home crowd as Minnesota held onto its ‘lead.’  The Wild would try to sit back and defending the lead and at times seem to give the Kings a bit too much time and space.  Yet at times the Wild demonstrated an ability to counter attack as Coyle found Kunin with a pass that gave him a step on the Kings defense and his shot would ring off the crossbar and out.  The Kings started to apply more pressure offensively and Stalock would make a few saves that drew an appreciative cheer from the home crowd.  Minnesota was paying the physical price to bock shots.  Yet with the Wild making little attempt to go on the attack it invited the Kings to be more aggressive offensively and they would get the equalizer as Adrian Kempe tapped in the initial shot by Tyler Toffoli.  2-2 game with a little over 2 minutes left in the period.  The Wild seemed fragile emotionally and had no urge to attack and the game went to overtime.

Overtime Thoughts:  In overtime there was a little drama as Stalock made some bold choices to be aggressive playing the puck, at times flirting with disaster and at others demonstrating some true on-ice vision.  Minnesota would be gifted a power play as Doughty collided into Stalock as he’d get sent to the sin bin for goalie interference.  Unfortunately on the power play the Wild went with Suter, Granlund, Parise and Spurgeon on the power play.  The power play was painfully static as Minnesota just moved the puck from the half wall, to the point, back to the half wall and then tried to force a pass / shot towards the screening Parise.  It came close to working once, but beyond that it was pretty ineffectively and barely tested the Kings at all and the game would go to a shootout.

Shootout Summary:  Minnesota would opt to shoot first and their first shooter was Luke Kunin who moved in with speed and then slowed down and he’d be denied by Quick.  The Kings first shooter was Ilya Kovalchuk who would take a very far left approach almost to the bench as he’d move in and try sneak a shot 5-hole that Stalock stonewalled.  Minnesota’s next shooter was Jason Zucker would move in and went forehand to backhand and lifted a shot over Quick.  1-0 Wild.  The Kings’ next shooter was Anze Kopitar who had some interesting back and forth but his shot would miss wide.  The Wild’s 3rd shooter was Parise who tried to dust off the same move as Zucker but he’d miss.  This meant Dustin Brown had to score to keep the Kings alive and he’d move in where he fanned on his initial attempt and then let go a shot that Stalock stopped giving Minnesota a 3-2 shootout victory.

The Texas road trip was not too kind to the Iowa Wild, where they went from sitting atop the Central Division to 4th.  Now that they returned home, the Iowa Wild would give the 5,242 who braved chilly weather given a pretty nice treat.  The 1st period was back and forth as both the Gulls and Wild traded a number of scoring chances with one another but Kevin Boyle and Kaapo Kahkonen were rock solid, keeping the game scoreless through the 1st.  The Wild would break the stalemate mid-way through the 2nd period while on the penalty kill as Justin Kloos stole a puck near the Gulls’ blueline and found Kyle Rau with a pass behind San Diego’s defense and beat Boyle with a pretty move.  1-0 Wild.  A few minutes later, San Diego would tie up the game as Trevor Murphy blasted a shot from the point that beat a well-screened Kahkonen to make it 1-1 going into the 3rd.  Iowa would take back the lead in the middle of the period as Rau buried a pass from Will Bitten to give the Wild a 2-1 advantage.  The Wild would do all it could to make that lead hold in regulation, killing off penalties, but it wasn’t quite enough.  After a mad scramble near the crease Adam Cracknell would sweep up a rebound and bury it with just 2 seconds left to send the game into overtime.  In overtime, after a few terrific chances traded back and forth, it was Rau who moved in off the rush before letting go a shot that just managed to sneak through 5-hole.  3-2 Wild win as Rau nets the hat trick.  Kahkonen had 28 saves in the victory.