Your Morning Dump… Where the Celtics saved their season 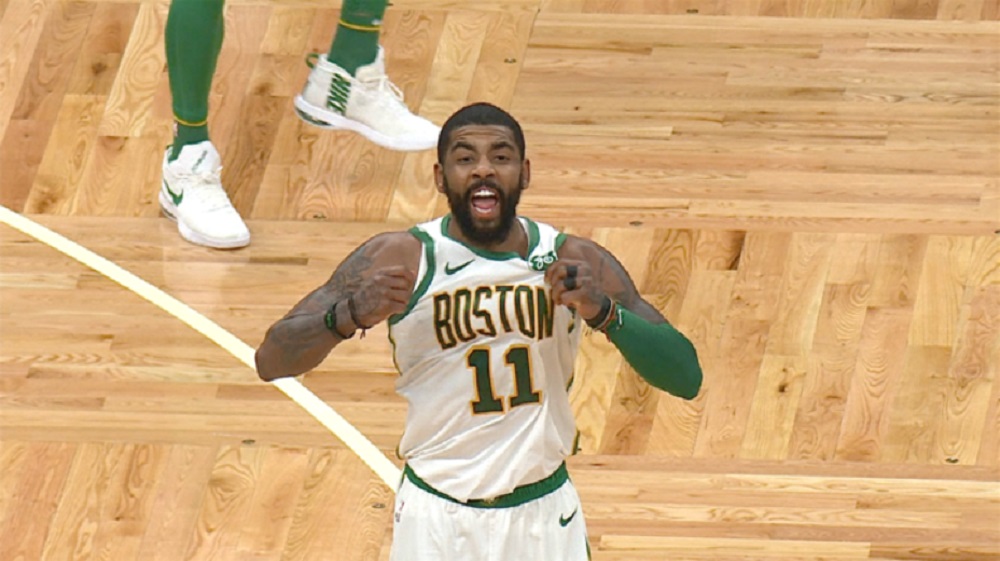 Your Morning Dump… Where the Celtics saved their season

Kyrie Irving hit a foul-line fadeaway to give Boston the lead, then hit a 31-foot 3-pointer to finish with 27 points and lead the Celtics past the Eastern Conference-leading Toronto Raptors 117-108 on Wednesday night.

Returning after missing the last game with a bruised right leg, Irving had 10 points and six of his career-high 18 assists in the fourth quarter — including passes to set up Boston’s last three baskets in a game-ending 17-4 run.

The Celtics scored 25 points in the final six minutes of Wednesday’s 117-108 win over the Toronto Raptors and Kyrie Irving was responsible for every single one of those points (via scoring or assisting). The All-Star went toe-to-toe in a tie game (94-94 with six minutes left) with one of the best players in the game in what was likely a sneak preview of the Eastern Conference playoffs matchup, and bested Kawhi Leonard on the second straight occasion (C’s won in OT back in November).

Irving ultimately finished with 27 points and a career-high 18 assists in a performance that showed his growth, both on and off the floor. The headlines nationally after this one will be focused on a maturing Irving off the floor after he explained postgame that he called LeBron James to apologize for being a knucklehead in Cleveland, while also seeking out advice for the impressionable youngsters on how struggling squad. Yet, the growth Irving is showing on the floor, particularly with his passing vision is what should give some Celtics fans hope in the midst of an underwhelming season so far in addition to his mea culpa on the leadership front.

Boston Sports Journal: The perfect mix: How an evolving Kyrie took over crunch time against Raptors

This is how it looked in all those Greenheart dreams. Celtic followers and even the lion’s share of NBA pundits had envisioned this all through the offseason as the Bostonians prepared to add Kyrie Irving and Gordon Hayward to a team that had gone to Game 7 of the Eastern Conference finals.

Irving, Hayward and Al Horford — All-Stars all — would perform to their superb capabilities, and that kid Jayson Tatum would be a deadly concealed offensive weapon. Others like Marcus Smart and Jaylen Brown would play their key hustle roles, though who knew Aron Baynes would be this critical?

On a night when the Celtics let some of their demons back into the building, they were, in the end, all that they had hoped and expected in a 117-108 victory over Toronto, the team that had stolen their thunder.

For one night anyway.

Herald: Bulpett: Celtics meet their season’s expectations — for this night

It’s not hyperbole to say that, before last night’s game, the Celtics were in danger of letting their season slip away. The disastrous three-game road trip saw them pushed around on the court and falling in the standings. The players were bickering. Fans were frustrated and wondering just how much to expect any more from this group. “Should Danny make a trade?” became a real question.

With league-leading Toronto in town, the Celtics faced two possibilities: lose, and have all the problems become magnified, or win, and get back on track toward the success we all predicted.

Besides Kyrie’s heroics in the final minutes, the Celtics did everything they needed to do to secure a statement win. They shot 50.0%, including 14-30 from three; they won the boards, 49-42; they registered 32 assists; and they held Toronto to 44.6% shooting (and 24.1% from the arc).

Except for a superstar performance from Kawhi Leonard (33 points) and a lopsided whistle (24 fouls called on Boston to Toronto’s 14), the Celtics might have won fairly easily. But in a strange way, it was better to see them overcome the challenges and deliver a dramatic ending.

Some of the keys besides Kyrie’s late takeover included strong defense from Terry Rozier (Brad: “I thought that his energy lifted everyone around, from our team, to the building.”); the return of Aron Baynes (a solid nine points and five boards, and a cold-blooded triple that tied the score at 92 and made the crowd go crazy); and aggressive, efficient outings from Al Horford and Gordon Hayward (combined 17-25 shooting, with 5-9 from the arc).

For the first time this season, Gordon Hayward (18 points), Al Horford (20) and Kyrie Irving (22) have all scored 18+ points in the same game #Celtics #Raptors

So today, we can sit back and enjoy a playoff-type win over the Raptors, while knowing that six of the next seven games are at home (where Boston is 16-5). Everyone is healthy and spirits have been restored. The problems of consistency and winning on the road haven’t gone away, but we now have hope that they might. At least for now, the season is saved.

On Page 2: Kyrie is all grown up

Celtics guard Kyrie Irving said that in the wake of his outbursts at coach Brad Stevens and forward Gordon Hayward on the court at the end of Saturday’s loss at the Orlando Magic, and pointed criticisms of Boston’s young players afterward, he called LeBron James and apologized for the way he handled criticism from James when the two were teammates in Cleveland.

“Obviously, this was a big deal for me, because I had to call [LeBron] and tell him I apologized for being that young player that wanted everything at his fingertips, and I wanted everything at my threshold,” Irving said after scoring 27 points and dishing out a career-high 18 assists in Boston’s 117-108 home victory over the Toronto Raptors on Wednesday night. “I wanted to be the guy that led us to a championship. I wanted to be the leader. I wanted to be all that, and the responsibility of being the best in the world and leading your team is something that is not meant for many people.

“Now I’m in this position; I asked for this and I want this. I want the responsibility. And I take it on full force. But it’s also good to reach out for help and really take responsibility for what you’ve done in your career. It takes a real man to go back, call somebody and be like, ‘Hey, man, I was young. I made some mistakes, I wasn’t seeing the big picture like you were. I didn’t have the end of the season in mind.’ I just wanted to get my stats and make All-Star Games, which in his career means like this much at that point. So it was just good, and it gave me a peace of mind to go about what I’ve gotta go do. Obviously, I’m going to be competing against him the best and everybody else in the league. But it was good.”

ESPN: Kyrie Irving apologized to LeBron James for not appreciating his leadership

Wow. Just … wow. How often do we hear words like this from anyone? It’s rare in sports; it happens in business only when there’s a public relations crisis; and it never happens in politics.

But here was Kyrie demonstrating to the world how seriously he takes his position as the face of the Celtics. It’s remarkable maturity from a 26-year-old. He’s walking the walk of leadership and – with his play and his words – he just shut down all the on-court and off-court drama that surrounded the team during the hideous three-game losing streak. He deserves a world of credit.

And as a bonus: Between what happened in the game and the postgame, we have another reminder that Kyrie’s not going anywhere else this summer.

And, finally… Lace ’em up

Jayson Tatum became the first player to wear a unique pair of auto-lacing shoes, actually inspired by “Back to the Future.” Tatum, who finished with 16 points and 10 rebounds, had good and bad moments through the game. Naturally, Twitter had thoughts.

jk… but we'll get them to you on @NBCSBoston once we see him on the floor pic.twitter.com/lCNXwfUmp8

We need to get Hayward (nerd) to hack the app and give Tatum a shock whenever he tries one of those Kobe long twos https://t.co/7bqeRvYEbm

That's the shot where Tatum's robot shoes need to zap him

Jayson's shoes were hacked this is the future you want, no thanks

Tatum may have upgraded the software of his shoes to give him that added boost!