Nick's Back. Now, Where to Hit Him? 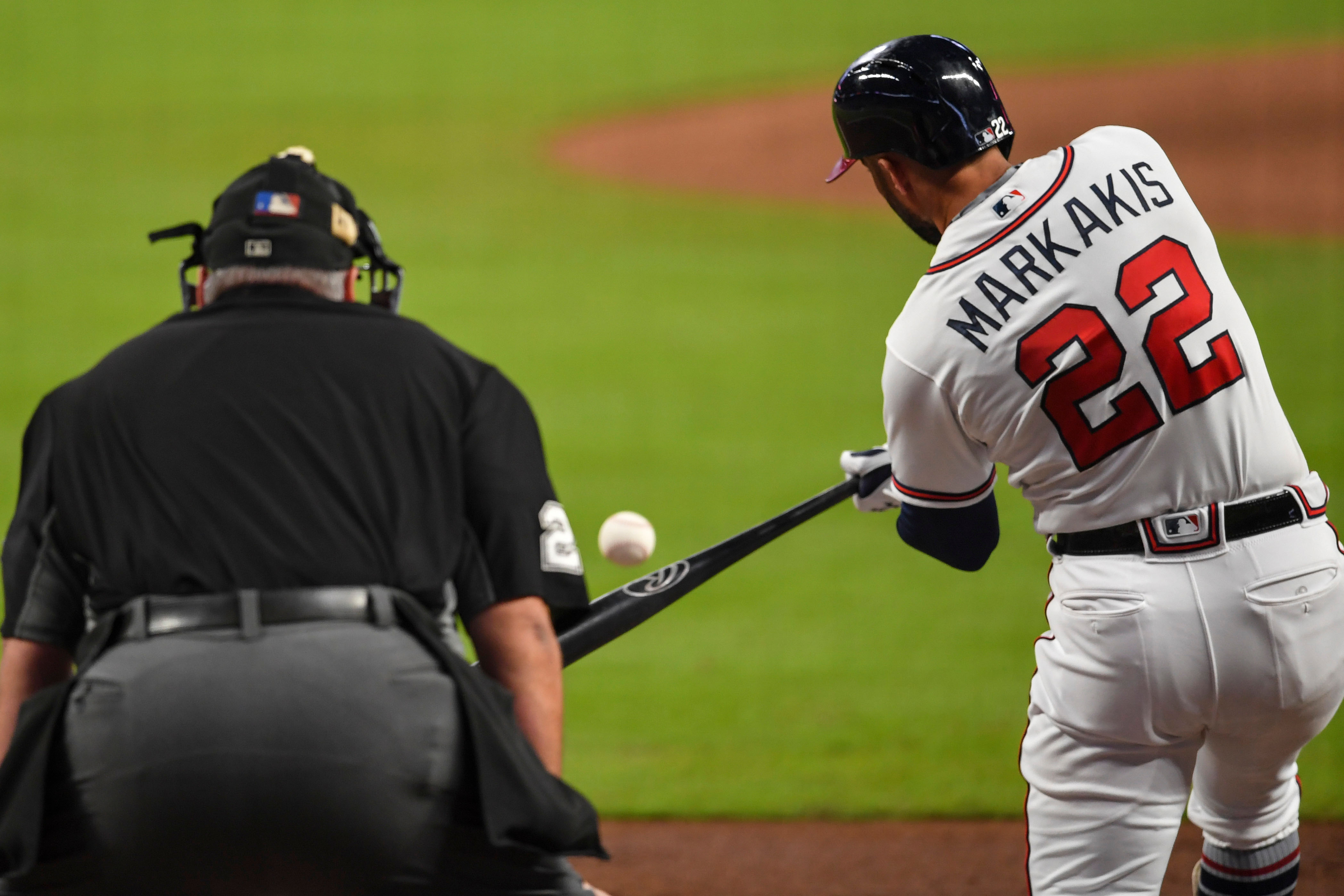 Nick's Back. Now, Where to Hit Him?

Of course, you already know that. With Markakis back on board, the Braves have at least addressed the open corner outfield position with a less questionable option than either hoping Adam Duvall remembers how to slug or Johan Camargo learns how to play a competent-enough outfield. As part of his contract, Markakis will be paid at least $6 million with $4 million in base salary for 2019. The other two million are tied into a buyout for a 2020 club option. The Braves could pick up that option, bringing back Markakis for a $6 million salary – or a total of $10 million over two years. That’s a million less than they paid him for just the 2018 season.

There’s a lot of things we can get into. Obviously, such a paltry sum for a 2018 All-Star, Silver Slugger, and Gold Glove winner raised some eyebrows. Did Markakis take a hometown discount? According to Alex Anthopoulos, the Braves’ general manager, Markakis had better offers with more years and promised cash. That’s a reasonable assumption, though one has to believe at this point, the Braves’ offer was at least competitive. Perhaps his postseason hardware wasn’t seen as a big boost to his value.

And certainly, because of the small amount Markakis will receive, it begs the question: what’s next? Will the Braves add a big salary? Anthopoulos plays things notoriously close to the chest – Markakis apparently agreed to his deal 48 hours before the news was broken, which was right before the Braves were about to announce it.

Those are fun avenues to explore and another one of our writers plans to get into that, but today I want to focus more on what the Braves have now. Let’s consider a world where an offensive upgrade beyond what the Braves have now doesn’t happen. Braves manager Brian Snitker has imagined that reality and, according to Anthopoulos, is “bullish” about the idea of moving Ender Inciarte back to lead off with Josh Donaldson, Freddie Freeman, and Ronald Acuña Jr. to follow. Presumably, Markakis and Ozzie Albies would be next with the catcher platoon of Brian McCann and Tyler Flowers hitting seventh and Dansby Swanson in the 8-hole. Snitker is not a fan of hitting the pitcher eighth so, even though I prefer it, we’ll ignore that idea for the time being.

Of course, Acuña Jr. took off after being moved to the lead off spot last July. According to MLB.com’s Mark Bowman, Acuña Jr. “proceeded to hit .322 with 19 homers and a 1.028 OPS over the 68 games that followed” the move to lead off. It won him a Rookie of the Year. As much of the lineup struggled, including Markakis, the young rookie carried the offense to a NL East crown. Snitker’s decision to move him from the lead off spot – while not official – is puzzling. The reigning National League Manager of the Year certainly is owed a little benefit of the doubt, but one of the easiest ways to mess up your offense is to take at-bats from your best hitters and give them to hitters that aren’t as good.

Presumably, Snitker is thinking one of two things – or more likely both. The first is the reason to move Acuña Jr.: protection for Freeman. Now, there are a litany of studies that go into this idea, but the data doesn’t support the idea that traditional lineup protection truly exists. Despite that, many people are convinced that it does. Donaldson, himself, touched on this subject for an article for Fangraphs back in 2015.

Is he right? Again, the data doesn’t exactly support lineup protection – at least in our understanding. Another quote from that article from Rays’ manager Kevin Cash gets us closer to what is likely the truth. “We factor in protection, but it’s not just having that one guy in front of him, or behind him. That’s not the driving force when making a lineup.” The traditionalist view is that lineup protection concerns the guy hitting behind the star. The truth is a bit more murky, pointing to the players hitting in front of that guy you want to protect having just as great – if not a greater role – in “protecting.” After all, it’s easy to pitch around a guy with the bases empty. It’s harder with runners on base.

The hope is that you have a deep lineup where you both are getting on in front of your top hitter(s) and have hitters following that will support them with their offensive capabilities. But building that kind of lineup is often both difficult and expensive. Wherever he hits, Acuña Jr. does one aspect of protecting, but can’t do both. Which is more important? Right now, Snitker seems to be leaning toward the more traditional view.

But moving Acuña Jr. takes away one of the speed guys from the top-of-the-order, something many people take issue with. That gets us to the other reason Snitker wants to move Inciarte to the lead off role: to fill the void left by Acuña Jr. with a fast player. Certainly, you could go with Albies, who hit lead off at times during 2018 with some success before his second half issues. As for Inciarte, he has hit lead off a bunch over the last three seasons. Both have a speed element. Inciarte is a more proven asset in getting on base. As a result, Snitker would like to bat him there. But I think that’s a mistake.

Now, in my perfect world, the idea of moving Acuña Jr. certainly isn’t even a real possibility, but if the Braves are dead set on moving one of their three best bats outside the Top 3 in the lineup, they should replace him with the best remaining hitter.

Allow me to introduce the better option to lead off – Nick Markakis. He went to some college in Georgia. I forget which one.

You might have had a small laugh at the idea of Markakis leading off. After all, he’s not exactly fleet of foot. And if you want a player leading off who is, it would make sense to pass on Markakis. Ideally, you would bat a faster player than Markakis in the lead off hole. After all, Markakis runs a 4.07 90-foot split. That ranks 266th of 426. For funsies, Acuña Jr. ranked sixth. God, he’s just so ridiculously talented.

But you don’t really NEED your lead off batter to be quick in this lineup. If Donaldson, Freeman, and Acuña Jr. do follow the lead off hitter as expected, check out their career ISO, or Isolated Slugging, which refers to their frequency of hitting for power – specifically extra bases. Starting with Donaldson, the ISO brigade goes .232, .205, .259. You don’t exactly have to go first-to-third with much speed all that often with these bashers finding the gap or sending one to the next zip-code.

What you do NEED is to go with your best hitter in the lineup who isn’t one of those bashers. You want to maximize those opportunities to score runs with a guy who is good at getting on base. Markakis was hardly the jewel of the off-season, but since coming to Atlanta, Markakis has carried a .284/.359/.400 clip with a .328 wOBA and 103 wRC+. Not great numbers – again, there’s a reason he was so cheap and signed this late and it’s not completely because he took a discount to do so. Conversely, for Inciarte, the marks are a bit worse with a triple slash of .287/.342/.391, a .318 wOBA, and 95 wRC+ since coming to the Braves.

The wild card here is, of course, Ozzie Albies. His offensive skill set is higher than either Markakis or Inciarte and only 17 players had a faster 90-foot split last season. He fills every box you want except for the fact that he really struggled down the stretch. However, he did hit left-handers all season, including a .368/.382/.540 split against southpaws after July 1. If that split success continues, it would be reasonable to flip-flop Albies and Markakis against left-handers, batting Albies lead off and dropping Markakis to fifth.

Let me be clear. I think Albies can take a big step forward. If he does, he would join Donaldson, Freeman, and Acuña Jr. as one of the best front fours for any lineup in baseball. But until that happens – again, I think it will at some point – the most sensible option is to bat Markakis lead off most nights and try to utilize the lineup’s best-remaining option at getting on base. I know he’s not fast. But that doesn’t mean he’s not the best choice.

If you liked this, consider sharing. For more on my thoughts back in December about signing Markakis, click here.