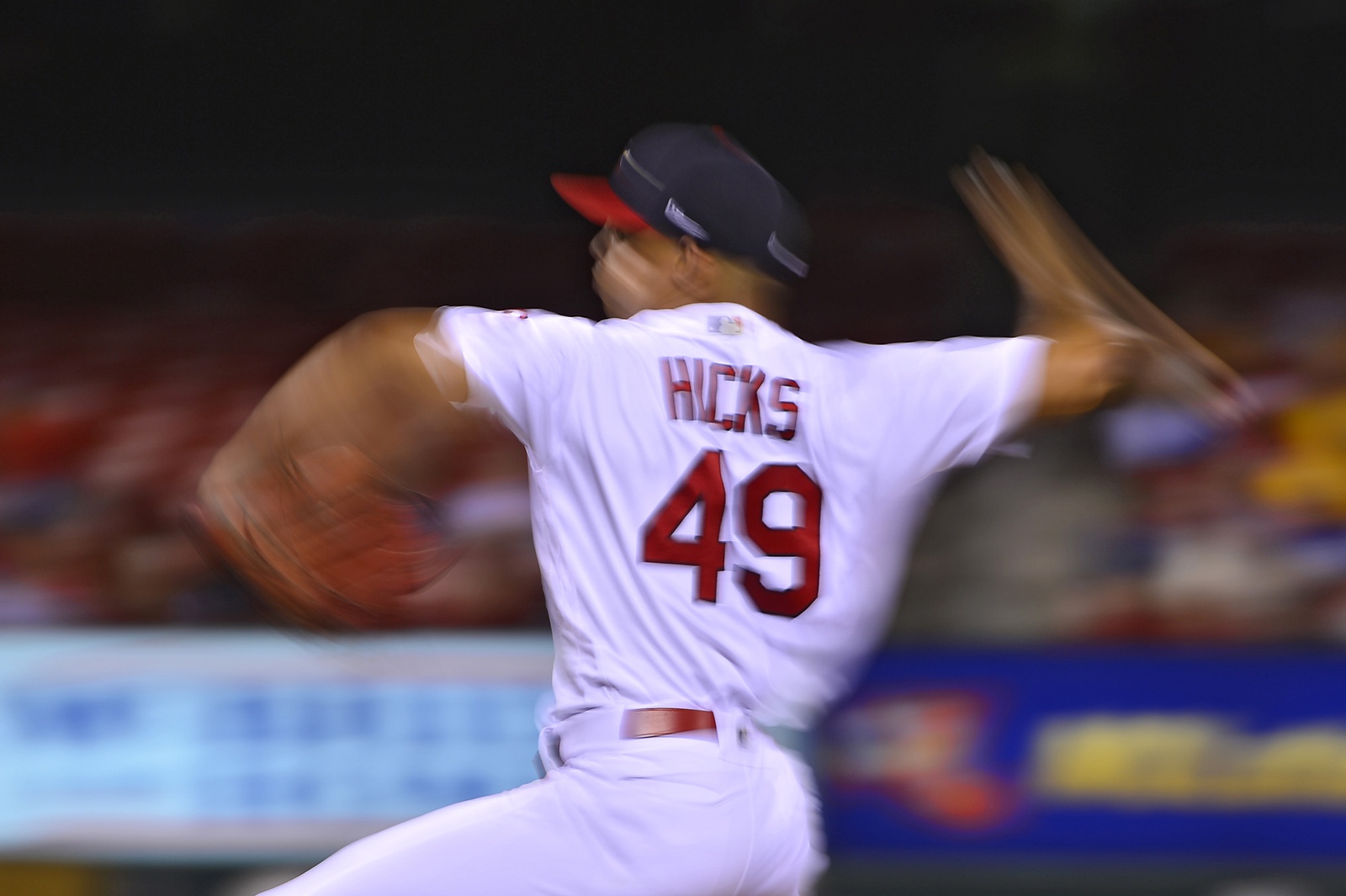 Clearly, it’s a little early to ask this question. We don’t yet know who will stink come March, who will get hurt, and ultimately who will make up the opening day bullpen.

However, we do know the current pool of pitchers that will be used to build that bullpen. Many fans think that the Cardinals still need to add another veteran reliever, in particular from the right-side.

While much of the cast is returning from a bad 2018 bullpen, I firmly believe that injuries and misuse were the root of most of those problems. And so, with that in mind, I am of the opinion that the Cardinals actually do have the personnel in-house to build a top tier bullpen.

What lead me to this topic was the recent release of the 2019 ZiPS projections for the Cardinals, which can be found here.

You can read the article for full details, but for the purpose of this post, I’ll get straight to the bullpen. Dan Szymborski projected the Cardinals 7-man bullpen (with zWAR) as follows:

Now, the ZiPS have only been released for 11 teams, so far. So the picture isn’t complete, but among those 11, the 4.2 would rank 6th. It’s neither good, not awful.

Where I See Things Differently

What I notice is that this bullpen is built based on either contract status or 2018 usage. It is a fair representation in those regards, but I disagree with it’s make-up.

Issue number 1 is Luke Gregerson. John Mozeliak expressed concern with an imperfect offseason for Luke and the chances of him being a contributing factor seem low at this point. His contract forces you to include him on projected rosters, but it isn’t totally realistic. I, personally, would toss him out and insert Alex Reyes.

My next issue is with the inclusion of Dakota Hudson. While I think he has a bright future, I really think he is best served returning to Memphis as a starting pitcher, at least to begin the year. His 2.63 ERA out of the bullpen last season is incredibly deceiving. His FIP was 3.86 and his xFIP was 4.76, pointing towards a lot of good luck. My gripe is that the biggest problem with the 2018 bullpen was a lack of strikeout punch (20.8 K% ranked 25th in baseball) and far too many walks (10.9 BB% ranked 28th). Hudson epitomizes this issue. 267 pitchers tossed 27 innings or more in relief last year. Hudson ranked 241st in K% (16.1) and 261st in BB% (15.3). Alot of guys on the 40-man roster have nothing left to prove at AAA. Hudson is not among those players. There is clearly still development that needs to happen.

So I would replace Hudson with my favorite pitcher on the roster, Giovanny Gallegos. Gallegos was acquired along with Chasen Shreve and could be the true prize in the trade. For whatever reason the Cardinals waited until the last minute to promote Gallegos, and he appeared in just 2 games. I have been beating his drum for quite some time, and I’ll spare you a repeat of how good his numbers are. You can read a full detailing of that in this post from September. Apparently I’m not alone, as ZiPS loved Gallegos as well. Projecting him for 60 IP, it put him at a 3.02 ERA, 1.1 WAR, 29.8 K%, and a 6.9 BB%. He was the 2nd best projected reliever behind Andrew Miller, yet he didn’t crack the 7-man group. He is also a complete reversal from the profile of Hudson, making him a perfect remedy for what ailed the bullpen in 2018.

Finally, the lefties. Cecil’s contract puts him in the ZiPS bullpen. However, comments from the team point towards a make-or-break spring training and I believe they are willing to cut ties should his struggles continue. Chasen Shreve is the fallback. ZiPS put Shreve at a 0.3 zWAR. I’m going to use these two interchangeably and assign a 0.3 WAR projection to the 2nd LH regardless of who it is. If its Shreve, there you go. If Cecil pitches well enough to beat out Shreve, then it’s not a great leap to assume he would match that projection as well. Heck, in a lackluster 2017, Cecil posted a 1.1 fWAR.

The Bullpen i would deploy

Right to it, here is the primary bullpen I would like to see in 2019, with projections:

That WAR total would climb to 3rd among the 11 teams with published ZiPS projections. A mark that high would have ranked 7th in baseball last year.

For reference, Cardinals relievers in 2018 COMBINED for a 0.5 fWAR.

This bullpen has 5 relievers tabbed for 0.8 WAR or better. Last season, only 3 bullpens (Yankees, Astros and Padres) had that many relievers pitch that well.

Now, the individual projections are not out of line, but nothing ever goes as planned with relievers, so this number is likely too high.

Still, I like that the additions of Gallegos and Reyes bring in two career MLB K%’s north of 25% that simply weren’t there last year. That would give them 5/7 at that level, for sure, with K% >25. Then there is the potential for Hicks to find that level. Finally, Shreve has a career K% of 26% and even 2017-Cecil had a 23.8 mark.

I’m rambling. The inclusions of Reyes and Gallegos and career numbers of others show clear potential for a high strikeout bullpen.

Andrew Miller — even at his subpar 2018 level — dramatically improves their left side. Someone out of Cecil, Shreve, Webb, and Layne is bound to represent a competent MLB lefty for the 2nd spot. They cannot get worse than last year (literally, they were the worst).

A healthy Leone — who had a 1.5 fWAR in 2017 and largely the same peripherals when healthy last year — could prove to be a major x-factor. The projections seem to be selling him short.

This version of the bullpen could be very, very good.

There are a few decisions that would need to be made to get to this optimal bullpen. I already mentioned Gregerson and, possibly, Cecil. The next two decisions would be on John Gant and Mike Mayers, both of whom are out of options. Considering that the Cardinals will likely carry 8 relievers, there is room for 1 of them with my bullpen, but not both. If they want to include Hudson or any other young pitcher (Ponce, Gomber, Helsley, Cabrera) then both would need to be moved.

Those decisions can be made after health and performance in spring make them unnecessary. These things tend to work themselves out. However, I wanted to make mention of them because their situation to provide resistance to getting the best relievers on the MLB roster. I’ve talked about this before.

As I said at the open, I don’t think adding another veteran reliever is a good idea. 1) It’s another guaranteed contract that forces really good pitchers like Brebbia and Gallegos to be optioned out because they are the only ones with that flexibility. 2) I just don’t think it’s necessary. Outside of a stud like Craig Kimbrel, finding a reliever on the market that will be better than Gallegos isn’t going to be easy and simply isn’t worth it.

We are dealing in potential right now. They have the potential for a great bullpen with the current pool. Even beyond my preferred group, there is plenty of MLB-ready depth that will be forced to AAA. It should, potentially, still be good even if 1 or 2 guys get hurt. Potentially.

Reality could paint a different picture. For that, there’s always the trade deadline.

But I’m cautiously optimistic on this bullpen. It’s just a matter of putting the right pitchers on the roster. If they do that, then the current bullpen is certainly good enough.