Your Morning Dump… Where Celtics vs. Warriors is a Finals preview (we hope) 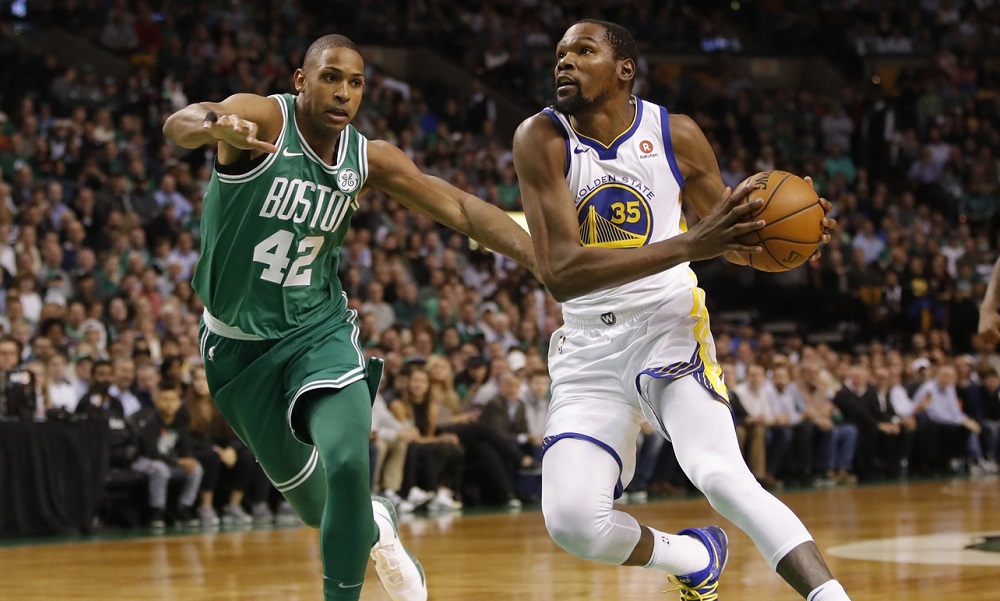 Your Morning Dump… Where Celtics vs. Warriors is a Finals preview (we hope)

The Celtics have had some great regular season games against the Warriors over the past few years, with huge wins on the road and a thrilling double-overtime loss in 2015. The last time they met, it took a 13 point explosion by Steph Curry over the final two minutes of the game to hold the Celtics off. Now they’re adding DeMarcus Cousins to the mix.

“They look like they’re playing at an elite level right now,” Brad Stevens said today. “I think any time you add a guy like that, and he’s on a minutes restriction still, or at least he’s playing limited minutes, it just looks like everybody’s got a little more bounce in their step, and, they’re tough. I don’t know that I’ve seen them play better during the regular season stretch since maybe the year they won 73.”

…the NBA is pretty good at this Saturday Primetime thing. Really, there’s nothing else anyone could want heading into Saturday night’s showdown.

The only thing that could put a cherry on top of this elite matchup? Well, that would be a Celtics victory.

Celtics.com: The NBA Nailed It by Selecting Celtics-Warriors for Saturday Primetime

Tonight is what fans of 29 NBA teams wait for all season: the visit from the defending champs. And in this case it’s the three-times-in-four-years champs. Beating them is (duh) a tall task.

Is this a Finals preview? The Cs are a long, long way from that level, but the Dubs expect them to get there.

“I think they’re the most talented team in the East,” Warriors forward Draymond Green said. “People think you just put great players together and it works. It doesn’t. They’re still figuring it out, but I don’t doubt that they will.”

What makes the Celtics truly formidable is Irving’s unyielding will. After missing the playoffs last spring to undergo two more left knee surgeries, he arrived at training camp in September keenly aware that Boston better not waste its shot at a championship.

Maybe the Warriors respect that the Celtics have split the last six meetings with Golden State and challenged them in the regular season probably more than any other team. As for tonight, the Celtics are playing better right now (five straight wins, 10 in a row at home) than they have all season.

As you settle into your easy chair or your seat at the Garden, favorite beverage in hand, keep in mind the following key to tonight’s game. It might decide if the Celtics are capable of beating the Warriors, both now and (we hope) in June.

So what’s the mindset?

NBC Sports Boston: Celtics, Warriors both soaring but on two different planes … for now at least

Related – Herald: Bulpett: Like Celtics, Warriors’ Steve Kerr knows it takes more than talent  |  Celtics brace for the best of the best

Globe: Celtics and Warriors in top form for their first meeting  |  The Warriors are the season’s first big test, and the Celtics feel up to the challenge

NBC Sports Boston: Root of Celtics success vs. Warriors can be traced to 2016  |  Boston Celtics can learn from these proven keys to beating Golden State Warriors

On Page 2: All-Star Kyrie has one job

The final piece of the puzzle is on/off numbers, where Irving is particularly spectacular. The Celtics are 11.3 points per 100 possessions better when he plays, which is in the 97th percentile league-wide, per Cleaning the Glass. By Cleaning the Glass’s metrics, Irving adds 28 expected wins to Boston’s total with his +12.1 differential of offensive rating vs. defensive rating. And perhaps most telling, the Celtics are actually slightly better defensively with Irving on the floor so far. The scheme certainly plays a role, but this is also the first time in Irving’s career he has been a net positive on the defensive end of the floor.

So to recap, Irving is one of the greatest finishers around the rim ever, he’s shooting over 40 percent from three, and he could make a case for himself as one of the league’s most effective passers, all while pulling his defense up to something close to average.

MassLive: Kyrie Irving’s All-Star starter case was a no-brainer after his impressive first half | Tom Westerholm

As we all know, Terry Rozier’s performance in last year’s playoffs made some people wonder if the Celtics should trade Kyrie. And on Wednesday, when Kyrie sat with an illness, Terry came through again, posting 26/8/6 in 30 minutes and directing an easy win.

But don’t get it twisted. Numbers like that are what Kyrie does every night. And that’s why he ranked first or second in each All-Star vote category.

So, no, the Celtics aren’t trading Kyrie.

And when Uncle Drew goes to the All-Star Game, he will have one job. It’s not to win the game or the MVP trophy or to score 30 points. It’s to get on the same squad as Anthony Davis and sell him on why he should want to be traded to Boston.

MassLive: Appreciative All-Star Kyrie Irving wants a competitive game in Charlotte, not ‘a waste of my time’

And, finally… Waiting for Gordo

For Boston, though, continuing to give Hayward minutes is not only an easy call — it is the only reasonable call to make.

There is one path to the Celtics becoming the team so many expected them to be this season. For the Celtics to find that path, Hayward needs to become his pre-injury self again, or at least something resembling it, by the first week of May.

If that happens, Boston has a very real chance to do the things it was expected to when this season began. But if it doesn’t? Well, the championship-contending aspirations so many had for the Celtics will remain figments of their imaginations.

ESPN: To reach their final form, the Celtics need Gordon Hayward to level up

This piece is a good look at Hayward’s attempt to regain his form, and the ripples – good and bad – that effort has caused in the Celtics’ season. It says, in a much better and more detailed manner, the same thing we noted in this space a couple of weeks ago: Hayward is an All-Star who’s only producing like a role player.

That’s not a criticism; it’s just reality. All of us were hoping that Gordon would be back to normal by now. Obviously, we were expecting too much, too soon.

All of this makes analyzing this Celtics season so complicated. The two biggest questions about this team — what version of Hayward will be in uniform for the playoffs, and whether the nagging knee tendinitis Al Horford has been playing through this season will remain a factor — can’t be affirmatively answered until May and June roll around.

So … we have no choice but to continue to wait. This is something I need to remind myself every day watching this team. I suspect you do too.

Boston.com: Celtics power rankings: The team’s back to normal, and so are the individual rankings

The Rest of the Links that Have Little to Do with Actual Basketball: