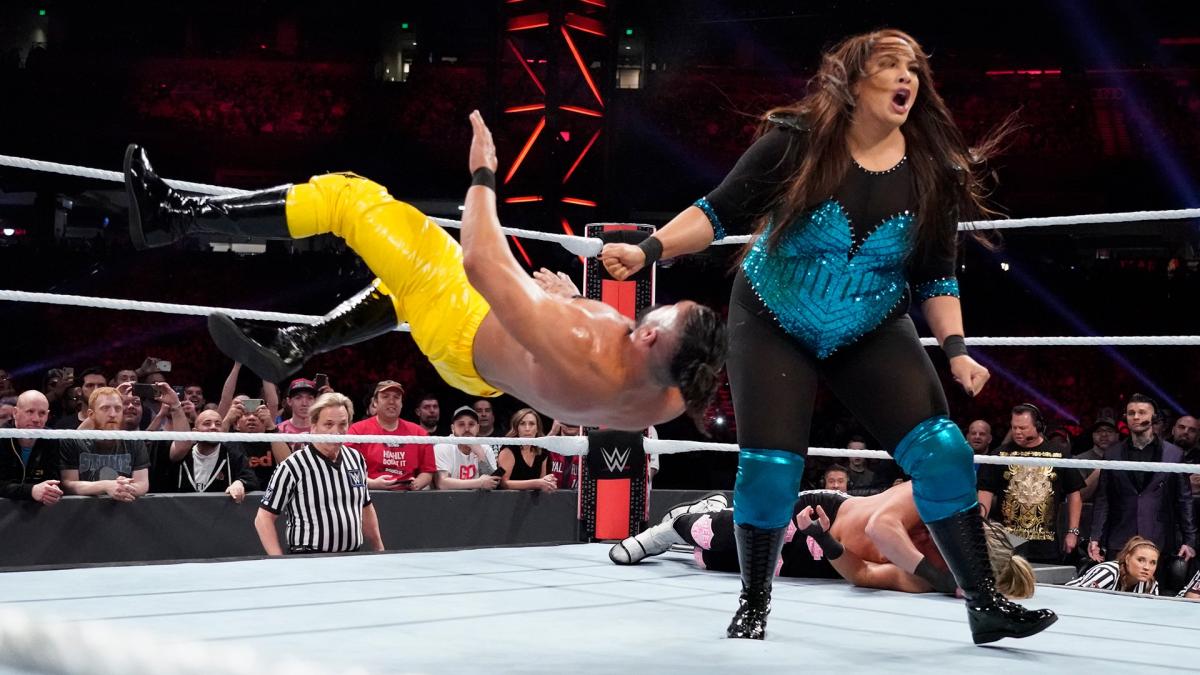 Nia Jax participated in the 2019 Men’s Royal Rumble Match on January 27. She was not announced for the bout and fans really didn’t expect her to be involved. But she attacked R-Truth, who came out at No.30. She took Truth out, preventing him from entering the Rumble. But she didn’t stop there.

Jax then made her way to the ring and entered the Royal Rumble. She took down Dolph Ziggler, Andrade Cien Almas and Rey Mysterio. She then tossed Mustafa Ali over the top rope, eliminating the SmackDown Live Superstar. Jax was on a roll until she ate a superkick from Ziggler, a 619 from Rey and an RKO from Orton. Mysterio and Orton then eliminated Jax from the match. So what’s next?

The first question out of everyone’s mouth is obvious. Is WWE introducing intergender wrestling full-time? It may sound like a rush to judgment and maybe it is. After all, The Royal Rumble did just happen and there’s just no way to know what WWE’s intentions were using Nia in this fashion.

But these things can move pretty fast. That means if there is a plan to implement men versus women, then the Jax event may be the genesis of it all. It’s almost as if WWE was testing the waters with this move. The company wanted to see how the fans would react in the moment, then they would either stop or go, depending on that reaction. Is that indeed the case?

WWE as a company has gotten along just fine without it. Men have faced women in Vince McMahon’s ring before of course. Fans know Chyna’s history in WWE. But they also know that since then, WWE has used the intergender gimmick as nothing more than a gimmick. Intergender wrestling was a comedy act. It was a sideshow attraction. It was just meant to get a laugh and nothing more.

But if WWE has indeed planted the seed for intergender matches to be competed at a high level, then that changes the game completely. Suddenly, the best from both the men’s and women’s division could conceivably face-off on any given night. If that happens, then fans will be forced to deal with the reality of intergender wrestling in WWE. But does the WWE faithful even want it?

The ironic part of this situation is that while WWE has chosen to stay away from it, much of the pro wrestling world has already embraced it. Intergender wrestling has become the norm for many promotions throughout the country and indeed the world. Those men and women likely don’t see anything wrong with men stepping into the ring against women. But are they right?

Pro wrestling traditionalists argue that women wrestling competitive matches against men destroys the realism of the business. To that point, what happens when a woman defeats a man in the ring? Does that then mean that she’s in line for a men’s championship if her opponent was a title contender? What happens to the last man that couldn’t beat her opponent? Does that mean that she is now a step above him? If so, does that even matter?

How much of a role does sexism play in this conversation? If a man states his case against women wrestling men, does that mean that he considers those women to be inferior to men? Or does that simply mean that he doesn’t care to see a woman getting punched in the face by a man twice her size? In the case of WWE, that could very well present a whole new set of problems.

WWE has done some good work with its Be a Star campaign. The company’s anti-bullying stance has hit home with many school kids that endure negativity and worse, everyday of their lives. So what if some of those kids also deal with domestic violence at home? Should WWE now feature matches in which women and men are fighting in front of an audience full of kids? How many mothers and fathers would stop bringing their children to the show if intergender wrestling made a comeback?

That may seem like a “turn the channel if you don’t approve” scenario, but WWE has corporate sponsors and shareholders that also may frown on intergender wrestling. Vince McMahon’s product is PG and has been for a very long time now. Doesn’t intergender wrestling threaten to change that rating? Is that a reality that the company is wiling to accept, in the name of trying something different?

But on the other side of this debate is the argument that in this modern age of female empowerment, women should be considered equal to men. Pro wrestling is a predetermined sport after all and if fans can be persuaded to believe that Rey Mysterio can defeat a super-heavyweight, then why would it be any less believable if Rey were a woman? Does physical size outweigh individual skill? If so, then how could any man under 200 pounds ever beat any man over 300 pounds?

Triple H gave his take on intergender wrestling back in 2018.

To say that in order for a female to prove that she is empowered that she has to be able to compete against a man? Or, to have to have a man be in the ring with her in order to be able to do what she does at a high enough level? No, you know what makes the female empowered? When she’s so good with another female in the ring that no man on that card can stand up to them.”

Maybe the real problem here is between the old school pro wrestling fans and the modern generation, who just cannot seem to come together. It’s not an impossible notion to believe that both sides can coexist. Good wrestling is good wrestling and it shouldn’t matter who the wrestlers are, as long as they’re entertaining. Right?

But it’s just not that simple. Fans that don’t agree with intergender wrestling should not be ridiculed for their way of thinking, as long as that way of thinking is not demeaning toward women. Intergender wrestling is not for everyone and that’s just how it is. By the same token, fans that do agree with intergender wrestling shouldn’t be ridiculed unless they’re looking at men versus women as being something other than competitive wrestling. The temptation to turn those matches into a total beatdown or humiliation of women is a real thing for some and that’s a line that just shouldn’t be crossed.

So what is WWE’s line? Was Nia Jax’s involvement in The Men’s Royal Rumble Match nothing more than a one-off? Or is there more to come? The only thing that WWE fans can really do is wait and see what happens next.