UND Hockey: Five in the Box 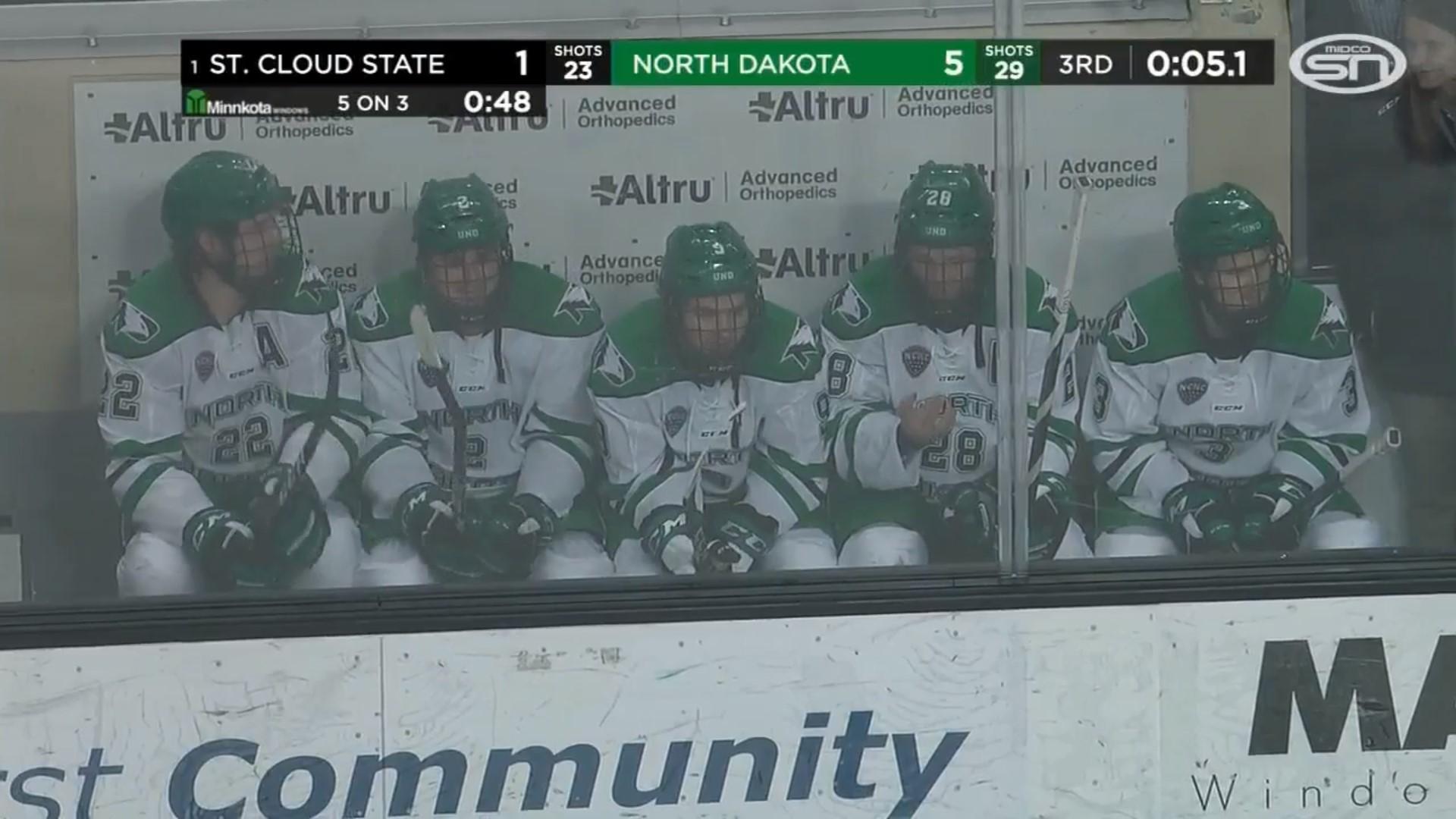 UND Hockey: Five in the Box

This past weekend, the University of North Dakota hockey team split their weekend series with St. Cloud State.

Friday’s loss proved very costly. In the final minutes of the third period, UND was trailing 2-1, Huskies captain Jimmy Schuldt hit sophomore forward Grant Mishmash with a knee-on-knee hit. There was no penalty for that hit.

This is a goal. The puck, on end, completely crosses the goal line. Worse is that @TheNCHC reviewed this and still got it wrong. This isn't that hard. #mondaymemo pic.twitter.com/bb6SfhgU4m

Saturday, after reviewing the hit, the National Collegiate Hockey Conference decided against suspending Schuldt. That didn’t sit well with the UND coaching staff.

He Doesn’t Have a History

On Saturday, I heard that Schuldt doesn’t have a history. Before we jump to  conclusions, ask Western Michigan and Colt Conrad what they think of  Jimmy Schuldt.

Last season, on January 12, 2018, Conrad was concussed by a Schuldt elbow. There was no penalty called on the play. Schuldt got off scot-free for injuring one of Western’s top players. Conrad missed about five weeks with a concussion.

Guess who was one of the on-ice officials for that game? None other than NCHC official Todd Anderson. I’ve had fans ask me, at what point does the league decide to cut ties with Anderson?

Last season, college hockey didn’t use video review to look at penalties to determine if a major penalty was appropriate.  Fast forward to this season. A simple video review of a  questionable “can” right a wrong. Instances like this past weekend reinforce the concept of having video review. I was told that Berry didn’t request a video review on the Mismash hit. I will try to get confirmation this week.

Yes, be careful what you ask for. This season, UND has been on the wrong side of these reviews, see Matt Kiersted, Jordan Kawaguchi and Gabe Bast.

Do What We Do

According to head coach Brad Berry, Mismash’s season is probably over. On Saturday, UND responded to the Schuldt hit the right way. Instead of taking unnecessary, undisciplined penalties, they left Schuldt alone. They hardly looked his way. When the game was no longer in doubt they did what they do.

“There was a message there, before the game,” Berry said “It was: ‘Hey, the first thing that we have to do is win the game. I know we’re mad, and we’re pissed off. But we have to make sure that we keep our emotions in check to get the job done at hand.’ And then after, we can do what we do. But we got the win and I thought we did a good job of being disciplined.”

No one should be shocked by UND’s reaction during the third period of Saturday’s game. IMHO, if the on-ice officials and the NCHC had responded differently in this situation, maybe this doesn’t happen. That’s life. With that said, this is why you had five in the box at the end of the game.

Following Friday’s game, I saw fans defending the hit. Let’s turn the tables, if one of the UND players had ended the season of  one of the Huskies with a questionable play, the fans of SCSU would’ve been howling. They would’ve been calling for a suspension and some retribution.

In conclusion, if anything, Schuldt’s questionable hit on Mismash woke a slumbering bear. On Saturday night, UND played with vigor and determination.  Finally, I believe that UND’s response to that knee-on-knee hit was measured and appropriate. That’s hockey.