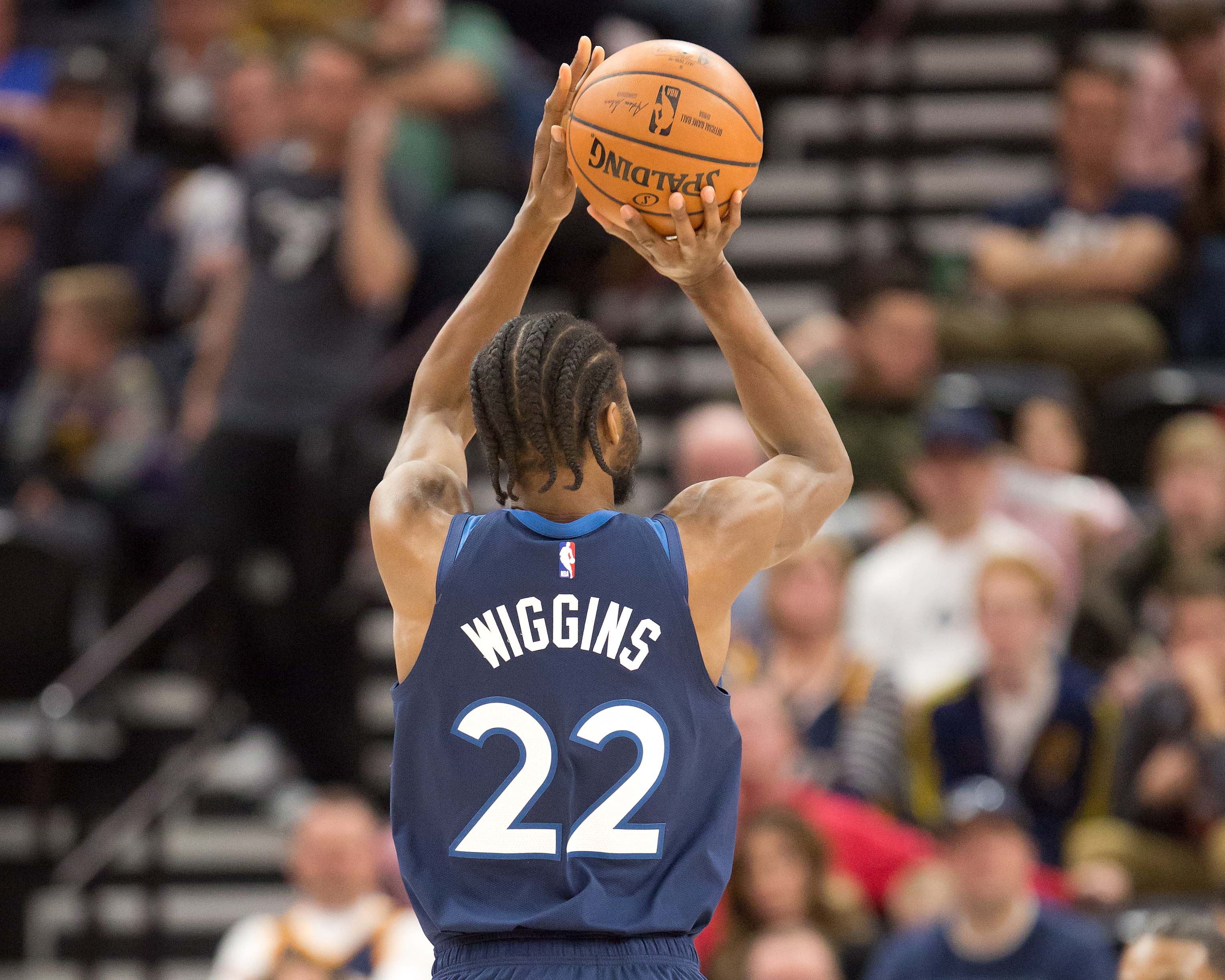 Since the Minnesota Timberwolves decided to fire Tom Thibodeau and name Ryan Saunders Interim Head Coach, Andrew Wiggins has picked up his production. Since the coaching change, Wiggins is averaging 21 points and 7 rebounds per game. Overall, Wiggins has been more engaged on both ends of the floor, and he seems to be responding nicely to Saunders’ communication. On Sunday, Wiggins’ increased production continued, especially on the offensive end, scoring 35 points on 13-23 shooting from the field. That’s a very efficient game for Wiggins, he led the Wolves in scoring and kept the game interesting in the fourth quarter at times. What made Wiggins so effective and efficient on Sunday night? Let’s get into the breakdown on each shot Wiggins attempted.

Andrew Wiggins’ first shot of the game comes off of a great action. Wiggins feeds the ball to Towns at the top of the key. Normally, Wiggins would continue to his right and receive a handoff from Towns, but Ingles overplays the handoff and Wiggins goes backdoor. Towns makes a nice pass to find him, and Wiggins gets an easy basket to start the game.

Wiggins’ second shot is also a good look, on a smart shot. The Wolves love to run Wiggins out of the corner and get him the ball in handoff action. Like the first shot, usually Wiggins likes to take the handoff and keep dribbling to his right. However, Taj sets a nice screen on this play, which allows Wiggins to set his feet and get a good look from three. The shot didn’t fall, but it’s a look that Wiggins should continue to take.

This next make from Wiggins is beautiful. The Jazz decide to double KAT, and Towns stays strong with the ball, allowing Wiggins to find the soft spot in the defense and make a cut to the rim. Donovan Mitchell and Joe Ingles take their eyes off Wiggins for a split second, which is enough time for Wiggins to cut to the hoop and get an and-one.

Wiggins’ next look in the first quarter is also great shot selection. Royce O’Neale decides to go under the screen on Wiggins, and Andrew smartly pulls up in rhythm from deep. While the shot doesn’t fall, it’s great recognition by Wiggins noticing the room he has from outside and firing.

Wiggins’ last look in the first quarter is his worst shot of the quarter. Wiggins uses the screen from Gorgui Dieng nicely, but settles for a mid-range jumper. Worse yet, after the screen, Wiggins is in isolation against Derrick Favors. That is a spot that Wiggins needs to blow by the bigger defender and get to the rim. Get into the chest of Favors and take his size out of the picture. With this miss, Wiggins finishes the quarter 2-5 from the field.

After getting a break on the bench, Wiggins comes out in full attack mode on his first shot of the second quarter. This is the perfect example of what Wolves fans and Ryan Saunders have been begging Wiggins to do more of. Wiggins grabs the rebound and takes the ball the full length of the court. After getting a screen from Towns, Wiggins goes into the body of Mitchell, bullying him out of the way. There have been numerous times where Wiggins has stuck his shoulder into the chest of his defender, and it’s beautiful. Doing so, Wiggins takes their shot-blocking ability out of the picture, allowing him an easy finger roll at the rim.

Next up, even though it’s a make, it’s not a high percentage shot for Wiggins. Andrew uses the KAT screen, and instead of using a side dribble into an open three, he takes one step inside the three-point line and drills a two. While it did go down as a make, and it’s a shot Wiggins loves to take, the side step into a three is a much more useful look.

Just like his first look of the second quarter, this is another example of Wiggins getting out and running. Wiggins is in the passing lane of Jae Crowder, then takes the ball the length of the court for an easy finish at the rim. If Wiggins can get two or three looks like this in a game, that can open up his confidence on other shots. There’s nobody in the league that’s stopping Wiggins one-on-one in transition when he’s going full speed.

This next look from Wiggins is super out of control. After getting stripped of the basketball on his way to the hoop, he gathers and fires a three. From the beginning, the play didn’t look right, even though the three ended up being in rhythm.

Andrew Wiggins’ last look of the half is hard to evaluate. It’s nowhere near a high percentage look, but the shot clock was winding down. There’s not much else Wiggins could’ve done with the time he had to shoot the ball. Wiggins finishes the second quarter 3-5 from the field.

Andrew Wiggins’ first look of the second half was much like his last look in the first half. With the shot clock winding down, Wiggins has to find a way to get the shot on the rim. I’m not a huge fan of Wiggins’ fadeaway shot going away from the basket, but it was probably the best move given the circumstances.

Next for Wiggins is a play that starts off great, but ends in a fall away shot over Gobert. A pick-and-roll between Wiggins and Towns has been deadly over the last handful of games, and it starts out promising on this play again. Unfortunately, Gobert cuts off Wiggins’ lane to the hoop, and Wiggins starts moving more sideways instead of challenging Gobert at the rim, which we saw him do at other times in this game. Obviously Wiggins can’t go at Gobert with every shot he takes, but this was an isolation opportunity against Gobert that should’ve ended better.

A little over the midway point in the third saw a great look for Wiggins from three. The Jazz have a hard time deciding who should be out on Wiggins contesting the three, and Wiggins makes them pay for sagging off.

Another great iteration of the Wiggins handoff action is seen in this next play. Instead of coming off the Towns screen towards the three-point line, Wiggins realizes his defender is too far behind, while KAT’s defender is too low, so he curls off the screen, allowing him to get a nice look right at the rim.

Next up is another one of my least favorite shots that Wiggins attempts in this game. I don’t see a lot of upside in taking a long mid-range two. Wiggins has the room to change his move into a side-step three, or attack Favors on the isolation. I realize that Favors is sagging on Wiggins, but he’s doing that for a reason. Andrew Wiggins is shooting just 29.9% (40-134) on long mid-range shots this season.

Andrew Wiggins’ last shot of the third quarter comes off another corner screen from Towns. With the defender on his back again, Wiggins curls off the screen, but not as hard as last time, which allows the defense more time to make their switch. Additionally, Wiggins looks hesitant going into the lane on this play as he settles for another fadeaway jumper. Wiggins finishes the third quarter 3-6 from the field.

Andrew Wiggins came into the fourth quarter on fire. While his first shot in the fourth was another mid-range shot, the clock was winding down, and he needed to get something away. He used a nice step-back to the left to gain extra separation from Ingles to calmly knock down the shot.

After the mid-range shot to start the fourth, Wiggins stayed in a groove. After getting a pass from Jerryd Bayless, Wiggins calmly set his feet and drills a tough three over Joe Ingles. While the Wolves were struggling to score the ball at this point in the game, Wiggins provided a huge punch.

I absolutely love this next play. This is aggressive Wiggins, and aggressive Wiggins is awesome Wiggins. After the screen from Towns, Wiggins goes right at Gobert, getting into his chest and finishing over Gobert’s outstretched arm. Wiggins had a chance to do this same thing in the third quarter, but he settled for a fall away shot. However, this time, Wiggins learned and he went at the big man.

Does this look familiar? Wiggins’ next shot is just like his last. Wiggins attacks the defense with speed, continues with speed against Gobert, cuts Gobert off, and finishes over him. These last two baskets are prime examples of what Wiggins can do. He has the ability to dice up a defense every night. Rudy Gobert is the best shot blocking center in the NBA, so if Wiggins can do this against Gobert, he can do it to anyone. We just need the consistency.

At this point, Andrew Wiggins is on fire. He hasn’t missed a shot in the fourth quarter to this point, and with the Wolves needing a three, Wiggins dribbles back into a tough three over Rubio and absolutely drills it.

Another tough look for Wiggins in the fourth quarter, and the shot was halfway down before it came out. If I was a betting man, I thought Wiggins was hitting this. He just came off a crazy three that he knocked down, and by definition this was an easier shot. However, Wiggins needed to fire the three with the Wolves trailing big, but the ball didn’t want to squeeze in.

Andrew Wiggins’ last shot of the game is great action by Minnesota. Wiggins starts out as the inbounds passer. After getting it in to Towns around the elbow, Saric sets a screen on Wiggins’ defender, and Wiggins gets an open look from deep. Saunders drew up a great set for Minnesota out of the timeout, and the Wolves executed everything, except making the shot. Wiggins finished the fourth quarter 5-7 from the field and 13-23 from the field overall.

In the end, Andrew Wiggins had a very productive game against the Jazz. While his 35 points wasn’t enough to lead the Wolves to a win, Wiggins’ aggressiveness was great to see. There were times that Wiggins settled, but more often than not, he went right at the Jazz defenders, putting his shoulder into their chest and finishing at the rim.