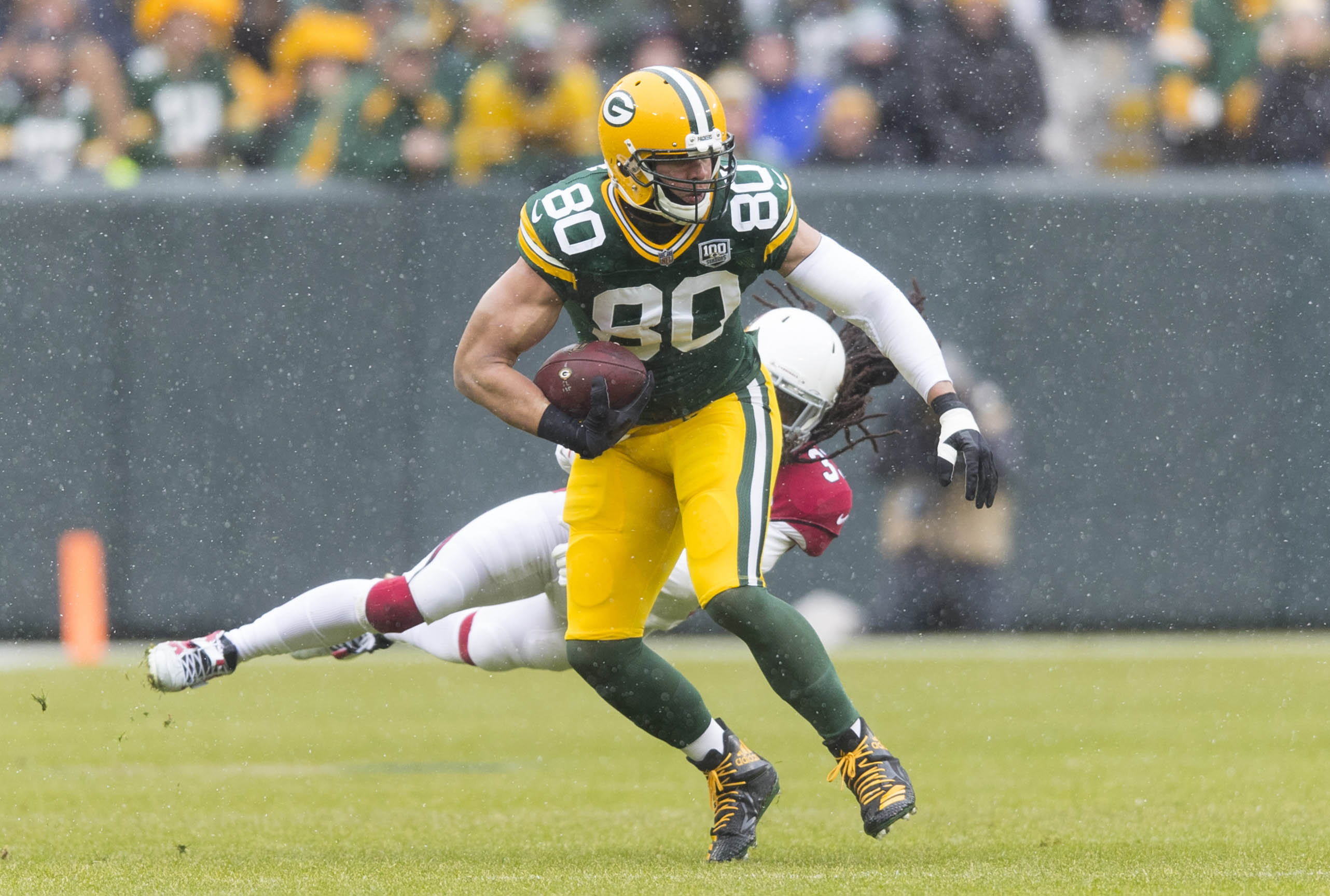 The Green Bay Packers were active in free agency prior to the 2018 season, signing some big-ticket free agents for the first time in recent memory. New general manger Brian Gutekunst had a new and more aggressive philosophy which most Packers fans appreciated. But how did Gutekunst do in his first season as GM? Here is a look at the free agents and trades Gutekunst made during the offseason and how they look a year later.

Grades are based on a combination of expectation, performance, impact and value for the money. Keep in mind if these players return in 2019, these grades could change depending on their performance going forward. These current grades are based solely on the players’ performance in 2018.

The Packers signed Graham to a three-year deal worth a reported $30 million. The big tight end was the most prominent free-agent signing made by Gutekunst during the offseason. The Packers were hoping Graham would provide Aaron Rodgers with a reliable target in the red zone and stretch defenses down the seam much like Jermichael Finley did during the offense’s heyday under Rodgers from 2009-2013.

Unfortunately, Graham was a pedestrian tight end in his first year in Green Bay. While he finished second on the team with 55 receptions, he averaged just 11.6-yards per catch and scored only two touchdowns all season.

Graham never seemed to be fully comfortable with his role in the offense and wasn’t a major factor in the red zone all season. The Packers called on Graham to block a lot more than he had been asked to do earlier in his career and while he was willing, blocking was never a strength of his game.

Graham admitted late in the season that “my numbers suck,” and hoped for a chance to make good in 2019.

Wilkerson was a Pro Bowl player for the Jets in 2015 for Mike Pettine, but his play tailed off the following two years before he signed with the Packers as a free agent. Wilkerson’s familiarity with Pettine’s defense was a big plus and the hope was that playing for his old defensive coordinator would help him rediscover his elite form on a one-year “prove it” contract.

Unfortunately, the Temple alum was injured in the Week 3 contest in Washington and was lost for the season. Wilkerson managed five tackles in 2 ½ games. He did not record a sack.

Wilkerson showed flashes of his old talent, but certainly wasn’t a standout in his limited appearances with the Packers. Pettine’s return may leave the door slightly open for Wilkerson’s return on another one-year deal if he’s willing to accept another “prove-it” contract (and if he’s healthy).

If Graham was supposed to be the pass catching tight end, Marcedes Lewis was brought in for his outstanding blocking ability. Unfortunately for Lewis, he didn’t see the field often in 2018.

When Rodgers was injured in the season opener, he operated out of the shotgun or the pistol on almost every play and that limited Lewis’ playing time.

Lewis caught only three passes all season for 39 yards. He never really found a role in the offense and may retire before the start of next season.

Williams had a successful return to Green Bay after signing as a free agent after two seasons in Cleveland and one in Arizona. Williams started the season at cornerback but when trades and injuries left the team thin at safety, Williams made the transition inside and played a steady game.

Williams played in all 16 games and finished fourth on the team with 54 tackles. The veteran Louisiana Tech product was a leader in the locker room and helped rookies like Jaire Alexander and Josh Jackson acclimate themselves to the NFL.

Unlike his predecessor at safety, Ha Ha Clinton-Dix, Williams was a sure tackler and didn’t give up too many big plays.

Bell was versatile, playing both tackle and guard when needed, but he was far from spectacular. The New Mexico alum started nine games and saw most of his action at right guard. Bell was a steadying force in the locker room but was a fill-in at best along the line. The longer he played, the more he was exposed.

At best at this point in his career, Bell is a backup who can be inserted into the lineup as a stop-gap replacement.

The Packers signed Breeland midseason when he passed his physical after an offseason injury. Breeland played in seven games for the Packers, starting five. He filled in well at cornerback and finished second on the team with two interceptions including a key pick-six against the Falcons.

Breeland showed big-play ability and leadership. The Packers should be interested in bringing Breeland back if he’s healthy and ready to play in 2019.

The Packers acquired Kizer from the Browns for former first-round pick Damarious Randall. While Randall played well for Cleveland after being switched to safety, Kizer rarely saw the field for the Packers.

The coaching staff worked on changing his footwork and helping him learn the offense.

Kizer appeared in three games but really saw substantial action in just two. He showed he has a strong arm and good scrambling ability, but still made some poor decisions that led to key turnovers.

Kizer still has a lot to prove before the Pack can feel comfortable with him as the starter if Rodgers goes down with another injury.

The Packers acquired Morrison just before the start of the season in exchange for DB Lenzy Pipkins. Pipkins wasn’t going to make the team anyway so anything the Packers got from Morrison had to be considered a bonus.

Morrison played in all 16 games and filled Jake Ryan’s run stuffing position. He made 45 tackles and recorded one sack.

Morrison played with hustle and showed heart. In the season finale against Detroit, he seemed to be the only player on the field going all out.