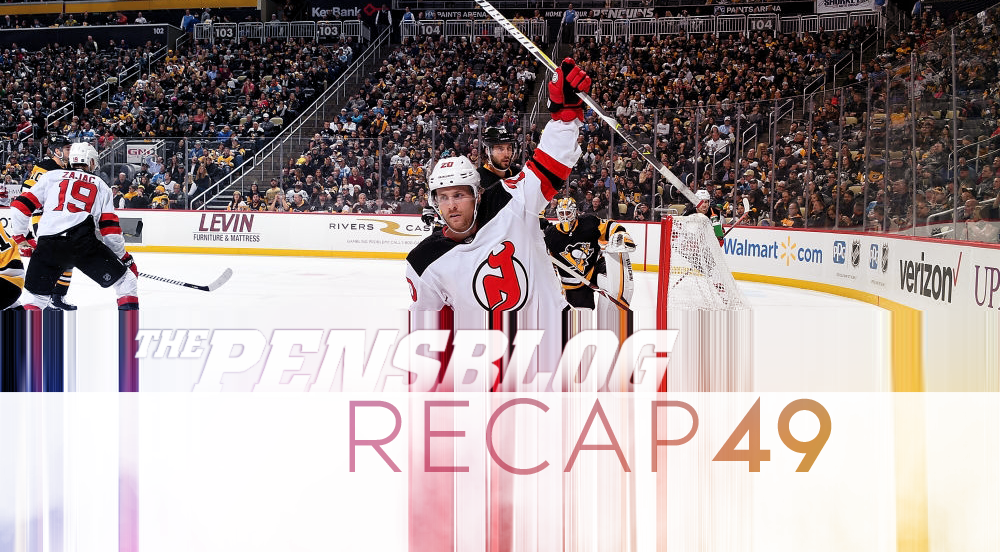 But in Game 49 for the Penguins, well…

Of course, none of this makes a damn bit of sense, especially considering the 8 games they played against one another just before this latest run of NJD success (from January of 2016 to the end of the 2016-17 season), the Penguins went 7-1-0.

not watching pens play the devils is self care

What makes even less sense is that the Penguins, since the start of the West Coast road swing until now, have given up 29, despite having scored 20 of their own and have won just 2 of their last 6.

Between the bye week and All Star break and immediately having to play a shithead team like the Devils, it was just the perfect storm on the island for the Pens to lay an egg.  But with Tampa on the horizon on Wednesday, we’ll really get to see what this team is made of.

It’s been so long without real hockey that we forgot what a Penguins lineup actually looked like, but apparently Sid and the Kids 2 were shown the electric boogaloo of reunification, Juuso Riikola was shown the lineup sheet, and Jamie Oleksiak was shown the door.  Farewell, sweet prince.

Typical start to a Pens/Devils game.  Devils rope-a-doped because they’re not good enough without Taylor Hall to play real hockey while the Pens looked like they were Wario trying to move through quicksand without the rocket helmet.  Only Murr looked the sharpest of all, though, despite little-to-no run support.

Then, the Pens went to the PP 7:51 into the game after Santini went off for delay of game., but they did dick with it, going 1 for their last 14 against Jersey on the peep.  Seems odd.

Once the PP ended, the Devils got themselves on the board though regular Penguin Killer Travis Zajac.  It started after Hornqvist sent the puck in deep, but not hard enough for it to make it by the defenseman to Brassard on the other side of the net, who took a really odd path to the puck by not actually taking a path to the puck.

Neither Pearson nor Hornqvist were able to capitalize on their double-team effort and the Devils were off in transition with 2 Penguins caught deep.

After Zajac switched the point of attack, Santini rimmed it around the boards, getting a fortuitous bounce in the process beyond Letang’s grasp and right to Miles Wood in behind him.

Zajac joined it late, collected the pass all alone at the top of the faceoff circle, waited that extra half second for Cullen, Maatta, and Coleman to get in front of Murray’s line of sight, and just wired one that Murr had no chance on.

Under two minutes later, the Devils would double their lead and you probably could’ve gone to bed.

After Rust lost an offensive zone draw to Zajac, Severson collected and hit Coleman to exit the zone.  Maatta and Riikola continued to retreat, Rust gave Coleman a lot of space, and no one deemed it necessary to pick up Severson streaking right down Fifth Ave.

Coleman’s pass to Severson rendered Rust obsolete and with Maatta and Riikola about 8 feet inside their own zone when Severson hit the blue line, everything was shot to shit.

Murray’s chances here weren’t helped either.  You can see Riikola from this angle try to get in the way of the shot, but in the process got in the way of Murray making a save.

Pens to the PP for too many men, but you know how this story ends: One for their last 15.  NJD took a 12-10 total shot advantage and a 2-0 goal advantage into the first intermission despite the Penguins seeing 16 of the 30 shot attempts, an even 6-6 split in scoring chances, and 3-1 in high danger chances in 14:40 of 5v5 play in the opening 20 minutes.

Jersey started storming the gates of the island to open the 2nd, only to have that effort negated when Vatanen got called for holding Guentzel’s stick 2:26 into the period.  But nothing matters and existence is pain.

Because with Brian Boyle on the ice against the Penguins in a climatic point of a game, you just know that fucker is going to score.

After a clearance in which Letang broke it out to Guentzel the neutral zone late in the powerplay, Money Bag dropped it off to Geno to try to do something with it as he was moving and 59 was stopped.  Normal enough, but really, the first unit really needed a change.  They were gassed.

So when Malkin tried to throw a pass over to the far side of the ice, he fanned on it and gave it right away to Zacha before taking the scenic route back to put back pressure on him.  Letang, trying to play both Boyle gliding to the net and Zacha manhandling Malkin. was unable to break up the slick one-handed backhand pass to Boyle all alone in front of Murr with Phil! slow to lift Boyle’s stick.

But about a minute later, the Pens 2nd unit gave the Devils something to think about as Brassard, Riikola, and Pettersson threw the puck around like they were PP1 on PCP, breaking Kinkaid’s shutout bid with a quick little snapper through traffic.  Don’t look now, but Brassard has 2G in his last 4 games.

Both teams traded off PP chances with the Pens getting the latter of the two when they got their fourth opportunity of the game after Mueller went off for hooking midway through the 2nd.  PP1 looked a lot better, but couldn’t find the net.

Of course, the Devils did about a minute after the penalty expired.

Nothing really went right on this play, either.  Dumo does a nice job cleaning up in behind his own net despite a NJD player giving chase on the forecheck, but it looks like Hornqvist gets caught in between two minds when he gets the puck: clear it or bank it to Brassard.  Instead, it turned into a weak north movement into the NZ that was cleanly collected by Butcher to reset the breakout, leaving only Pearson to pursue as Brassard went to the bench for a change.

Vatanen nearly puts the whole thing on its head when he mishandled the puck, but as he collected it and threw it back over to Butcher, it took Pearson out of the play.  With Brassard climbing onto the bench, it allowed Zajac to peel back and get a head of steam through the middle of the ice.

Now, watch Cullen here.  He’s busting his ass to get involved in the play, but in barreling at the puck, he takes a bad angle at Butcher, allowing Butcher to shift towards the benches slightly to beat Cullen and slip a pass in behind him to Zajac.  Because of Cullen’s angle of approach, Garrett Wilson was left for dead, unable to sweep across and break up Zajac’s effort, sending the Devils in on a 3v2.

Here, you can see Letang and Dumoulin collapse on Zajac and do a nice job to knock the rolling puck away from him, except in doing so, it stayed right Zajac to turn and slip a pass over to Coleman in support.

What a release from Coleman though.  Again, no real chance for Murray here.  He can’t get out and challenge with Zajac streaking up the middle and Coleman was able to just put it on a postage stamp.

But what a weird goddamn bounce here for 8 and 58.  What are ya gonna do?

Midway through, Brassard got himself ejected for “elbowing” Vatanen and splitting him open.  It wasn’t an elbow, but was probably definitely boarding.  Probably a coin flip on the mizzie, too, but with Vatanen’s helmet splitting him open and the score, you can’t blame the refs for trying to prevent it to turn into a goon fest.

But with the 5 minute man advantage, the goals flowed.  First, Palmieri would score the first at the midway point of the PP after the Pens PK got caught chasing the ever-loving hell out of the puck.  Again, hard to blame them here when they’re trying to get themselves a goal to pull within 2, but you still can’t give a guy like Kyle Palmieri a free shot from 10 feet away.

Cullen and Kinkaid would make things a little fun just 48 after the latter set up an NHL 94 goal for the guy that was approximately 37 the year that game came out, but the only ones that give a shit are the ones that own Matt Cullen in deep fantasy leagues where shorthanded points are a standalone category.

Certainly the Penguins didn’t care because 67 seconds later, the deficit was back to 4 following a dump in gone wrong.  Can’t remember the last game that literally everything went wrong for Dumoulin, but his attempt at moving the puck out from below the goal line found only Andy Greene at the point to shuffle over to Zacha at the side of Murray’s net for the easy-peesy one T.

The Pens would score one more before the end of it through a slick little play and pass from Malkin to send Rust through 1v1 on Kinkaid, but that was all she (and I!) wrote.

Bolts come to town tomorrow to round out January before February kicks off with the Pens hosting the Sens on Friday before heading up to Toronto on Saturday.  Go Pens.