Are We Overly Concerned With Matt Carpenter's Arm? 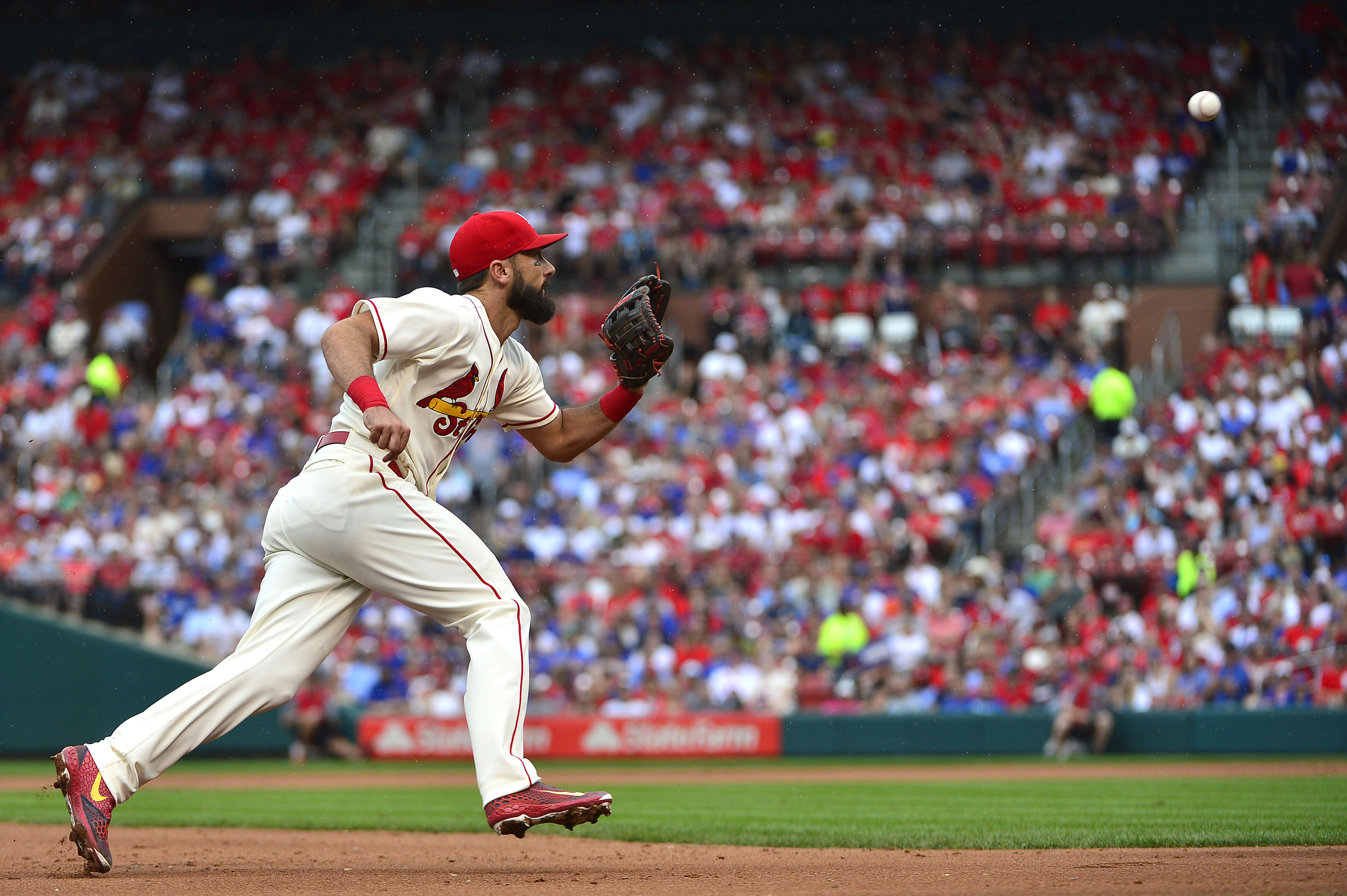 Are We Overly Concerned With Matt Carpenter's Arm?

For as long as Matt Carpenter has been in the big leagues, fans have questioned his arm. Especially when making the long throws from Third Base.

I get it. One of the first things I noticed with Carpenter was a somewhat awkward looking motion and unusual arc to his throws. On the television cameras, that strange, high-ish, arc would give every throw the appearance that it was heading for Section 140, rather than the First Baseman. Yet, time after time, it arrived at it’s proper destination to record an out. Over the years, we got used to it.

But now the concern has been renewed. After 2 seasons of being a most-of-the-time First Baseman, Carpenter is cemented at 3B this season, due to the acquisition of Paul Goldschmidt.

By the metrics, Carpenter had his best defensive season as a 3B in 2018. In this piece from Derrick Goold, he credits a change in positioning and a more aggressive approach for the improvement.

No one is expecting Carpenter to boast the range of an Arenado or Rolen, and there is a general confidence that he will field the balls he can reach.

As noted, his throws have always been weird and his arm has never been particularly strong. Then in 2017, he had a shoulder issue, making the situation worse. With rest and some mechanical tweaks his shoulder was healthy in 2018. And his throws? They pretty much looked like they always have.

But people are still worried.

They are convinced that Carpenter will completely negate his offensive value by being terrible at 3B.

They are convinced that any defensive value added with Gold Glover Goldschmidt will be cancelled by the wounded ducks drifting over from the hot corner.

It’s highly anticipated that Paul DeJong will actually complete most throws for him. (Ok, that one is over the top).

Here’s what I think, though.

I think folks are making too big of a deal about this.

While I admit that Carpenter has an odd looking throw, it has always been effective in converting outs. And that’s what matters, right?

And if you don’t believe me, let’s turn to the numbers.

I mentioned that Carpenter doesn’t have the strongest arm. Arm strength is a generally overrated thing. Is a cannon a weapon, and a bonus? Yes, absolutely. But it is such a small percentage of plays where an elite arm makes the difference over an average arm. I don’t recall any batters simply out running Carpenter’s throw to first over the years.

The key with him is simply making an accurate throw and recording an out. That is the goal. And he has proven that he can do that at a perfectly acceptable level.

I went looking for all players that have logged 2000+ innings and made over 500 throws as a 3B since 2012 (Carpenter’s rookie season).

“Throws” are simply Assists+Throwing Errors. Those numbers are readily available. Finding the numbers of infield hits on throws made is a level of digging that I am not willing to do, and there are more variables in an infield hit than the fielder’s arm. We need to keep it simple.

Generally, I don’t like using errors or fielding %. They aren’t good indications of defensive ability. However, bad throws are less subjective than glove plays, which makes throwing errors a little more solid. Second, our goal is to see how efficient Carpenter is at getting an out when he does make a throw, so in this exercise it works.

I created my own metric here, calling it Out Conversion Percentage. It’s a modified version of Fielding %, in which I eliminate the Put Out and Fielding Error parts of the equation. That leaves a simple equation of Assists / Assists+Throwing Errors (or Total Throws).

It’s very straight forward, when a 3B fields a ball and lets go of a throw, how often did it result in an out?

Here are the results, via my spreadsheet:

Carpenter lands at 22nd on this list of his contemporaries. That is firmly in the middle of the pack, which is about what I expected.

He is not in the top-tier as far as accurate arms go, but he is far from bad at getting the ball to 1B (or 2B) for the out.

And while there are plenty of notable players ahead of him on this list, there are just as many below him.

Consider that Josh Donaldson, whom many fans were up-in-arms about not signing, if literally the worst active 3B in baseball when it come to making errant throws. The only people worse since 2012 are a guy that moved to 1B because of yips, an out-of-place middle infielder, and a DH. My goodness, Pedro Alavarez was bad. And Donaldson is considered to be a very good 3B by most metrics.

Consider that 4 of the players below him combined to win 5 Gold Gloves over the 2012-2018 time period. One of them is 2018 Platinum Glove winner Matt Chapman. Now, Gold Gloves can be overrated, but I don’t think anyone doubts the defensive prowess of Chapman, whose defensive metrics are off the charts.

I’m not saying Carpenter is the better 3B. Heaven’s no.

I’m just saying that there are some highly-regarded 3B in the game today that have made throwing errors on a greater portion of their throws than Carpenter has.

Which leads me back to my main point.

We ARE overly concerned with Carpenter’s arm.

He makes the throws and he gets the outs.

He has a slightly higher Out Conversion Percentage than Public Enemy #1, Kris Bryant.

He is not terribly far behind divisional counterparts Travis Shaw and Eugenio Suarez.

It may not look pretty, but Carpenter gets the job done.

So, it’s not worth worrying about Carpenter’s arm. He’ll be just fine.