Wild Sluggish In 3-1 Loss to Dallas 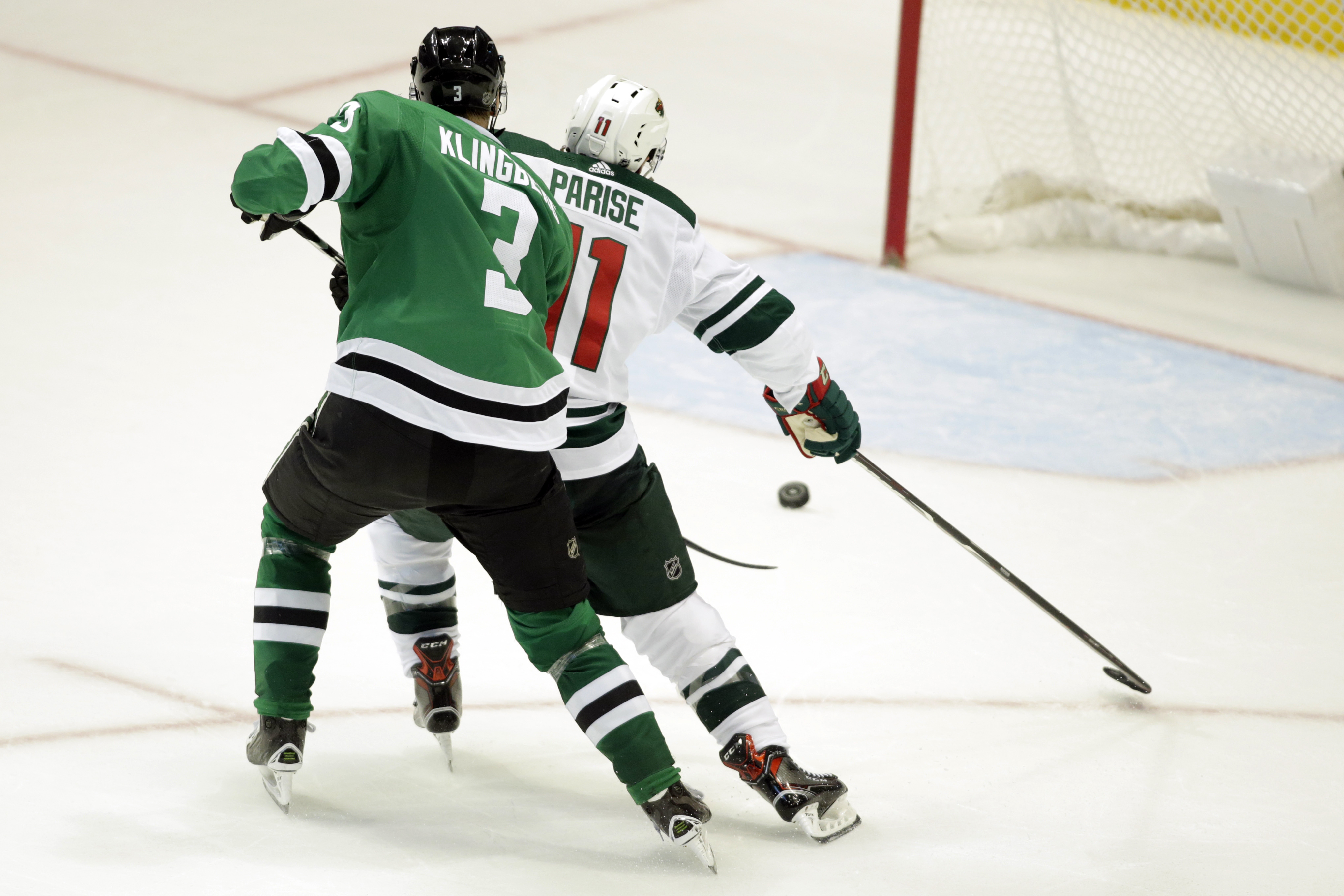 Wild Sluggish In 3-1 Loss to Dallas

Welcome back from the NHL All Star break folks!  Let’s give you a quick run down of what (probably) took place for most of the Wild players who did not attend the event itself.  Spend some relaxing time away from the bitter below-zero cold in exchange for some place sunny and along the beach, check.  Consume a few drinks and a few beers down by the beach, check.  Not have a care in the world, check.  So with a few days off the players return from their mini-vacations to the reality of the grind that lays before them.

The same is true for the Dallas Stars, who are hoping to try to get off to a fast start in the home stretch of the season.  With the schedule compressed and every point bringing you a step closer to the playoffs no one wants to stumble out of the gate.  Can the Wild pick up from where it left off by earning a victory in Dallas?

1st Period Thoughts: You know how to make your team look like you’re not completely rested? Start your plodding, slow players in the first few shifts. I mean, why not start your speedier guys to try and set the tone and possibly generate some offense. Instead, both teams are just skating back and forth, not accomplishing much of anything. Yet, Dallas will weather this kind of slow, defensive game much better in the long run. But I will say that I do feel better having Eric Fehr back in the lineup. Just before his injury, he was really starting to look like he found his spot on this team. Plus, he definitely adds a calming, veteran presence on this team. And like Eric Staal he has a Stanley Cup in his resume. Another thing that indicates that this team hasn’t played in a while, were the consecutive icing calls the Wild took near the midpoint of the period. The longer Minnesota goes without looking more controlled, the more dangerous things can be. But I suppose some of that can be chalked up to the fact that the Wild had only one practice during all this time off, and that practice being yesterday. And it’s going to be hard getting back into the swing of things with the strange schedule that Minnesota has in the immediate future. As the period continues, we’re starting to see Devan Dubnyk’s bad habit of overplaying the puck behind the net when he gets bored.  The Stars were ramping up their physical play and the Wild seemed to be ok with just taking a hit instead of delivering a check of their own.  As much as we tease Devan Dubnyk for leaving his crease to play the puck, Ben Bishop was trying to be ‘helpful’ by playing pucks which seemed to flirt with disaster.  Dubnyk would leave his net to sweep away a dangerous loose puck on a diving poke check that sent Alexander Radulov flying.  A few minutes later, Dallas had another great chance from in close as Jason Spezza was denied by Dubnyk.  Minnesota was having a difficult time creating much in the way of scoring chances, but a good shift by the Mikael Granlund, Mikko Koivu, Jason Zucker line resulted in a few quality shots on goal in the waning minute of the period.  Not a great period, the Wild looked winded out of sync like you’d expect from a team that had only been the ice once in 8 days since its last game.

2nd Period Thoughts:  The 2nd period did not start too well.  The Wild got caught pinching too much and the Stars raced back down the ice that nearly resulted in a goal for Denis Gurianov if not for a poke check by Marcus Foligno.  Dallas would score on the very next shift as Roman Polak sent a shot on goal that Andrew Cogliano redirected by Dubnyk.  1-0 Dallas.  It was Cogliano’s first goal as a member of the Stars, but he’d give Minnesota its first power play opportunity as he raked Parise across the face with his stick giving the Wild a 4-minute power play.  The first 3 minutes of the man advantage were pretty awful.  No cohesion, lots of errant passes and discombobulated scrambles for the puck and virtually no shots being taken.  In the last minute the team finally started to activate its defense a bit and it was Eric Staal setting up Brad Hunt from beneath the goal line and the former Bemidji State star wired it by Bishop.  1-1 game.  Minnesota would then give Dallas its first power play on its next shift as Staal was given a slashing minor.  The Wild’s penalty kill could best be described as helter skelter as they struggled to work pucks out of the zone which meant they leaned heavily on Dubnyk’s ability to make saves and he did a great job with a fair amount of traffic near his crease.  Even after the Wild killed off the penalty, the Stars would continue to swarm all over the Minnesota end and Dubnyk was sharp.  The Wild tried to turn the tables with a better forechecking effort and while they were able to generate a few more shots in the last few minutes none were of the high danger variety and they’d go into the intermission knotted up at 1-1.  A better effort, but still rather rusty.

3rd Period Thoughts:  The 3rd period started out rather cautious as both clubs were wary of making a major mistake that would result in quality scoring chance in their own end.  Time and space were tough to come by and teams were making sure they took the body after nearly every shot sent on goal.  You could sense the level of anxiety building in the arena as the game kept rolling along knotted at 1-1.  Please excuse me for going off on ab it of focused rant on Victor Rask.  He seems to have good hands, but his legs are slow and his stride is just clunky.  Rask seems to hesitate in just about every race for the puck, but he’s actually pretty adept at cherry picking but all too often he just doesn’t have that step or two to create separation.  The Stars would take the lead as Tyler Seguin sent a shot from the wall that trickled through Dubnyk.  2-1 Dallas and it was a pretty soft goal as there was no screen and the shot was taken from a fair distance away.  Minnesota tried to answer back, but the Wild couldn’t appear to find any open ice to send much in the way of shots on goal.  The Wild had shortened its bench to being a two-line team rotating between the Koivu line and the Staal line.  Neither line had a lot of jump and time steadily dissolved off the clock.  Minnesota wanted to pull Dubnyk with 1:23 left in the game, but does this club have any gas in the tank to make a late push?  Nope.  The Wild didn’t have the focus or the energy to make a few simple passes and as Dubnyk left the ice Koivu passed a puck to an area where no one was at and Granlund tried to recover only to give it away to Seguin to sealed the game with an empty netter.  3-1 Dallas victory.

~ Attendance was 18,124 at American Airlines Arena.

LW – Kirill Kaprizov (CSKA Moscow, KHL) ~ the talented Russian is heating up offensively as he had 2 goals (including the overtime game winner) on 6 shots in CSKA’s 3-2 victory over Dinamo Minsk.  He then followed it up on Thursday with a goal and two helpers on 4 shots in CSKA’s 5-4 win over Ak Bars Kazan.  Kaprizov has 24 goals, 39 points, 12 PIM’s and is a +29 in 50 games.

RW – Shawn Boudrias (Cape Breton, QMJHL) ~ the rugged power forward had an assist in the Screaming Eagles’ 5-1 win over Sherbrooke on Wednesday night.  Boudrias has 18 goals, 38 points, 23 PIM’s and is a +11 in 43 games.

Let’s Play Hockey released its latest rankings for Boys and Girls in Class A & AA.  Here are their rankings as of January 30th, 2019.  Check it out!