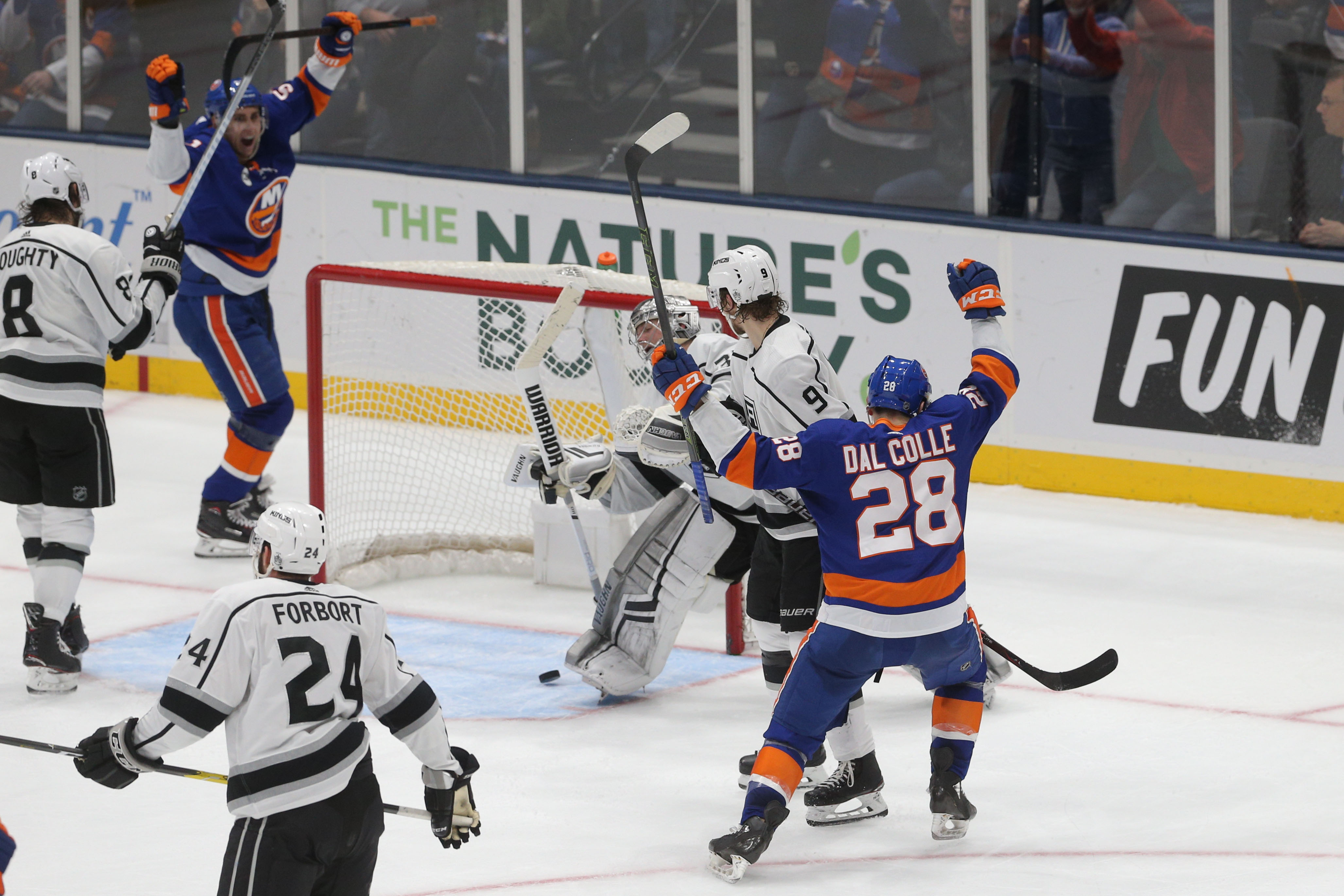 UNIONDALE, N.Y. — No, the Islanders didn’t put up a great effort on Saturday night, but it was enough to come away with a win and two important points in the standings.

The Islanders defeated the Los Angles Kings 4-2 at Nassau Coliseum and picked up three of a possible four points in a two-game span over the weekend. Michael Dal Colle deflection at 17:37 of the third served as the game-winning goal and Brock Nelson scored on an empty net at 18:29 to seal the win.

“Emotions are still high on that one,” Dal Colle said about his goal. “That one felt really good. I haven’t been that excited in a long time. That one was really nice to get and it was a big team win for us.”

The goal was Dal Colle’s second in the National Hockey League and helped the Islanders complete a late third-period rally that saw them score three times in the final 6:14 of the game to erase a 2-1 deficit. Mathew Barzal kicked off the comeback 31 seconds after the Kings had taken the late game lead.

The Islanders victory moved them to 6-0-2 in their last eight games and 16-3-2 in their previous 21 contests.  They also extended their hold on the Metropolitan Division lead to four games.

“I was real happy with the way we responded,” Islanders coach Barry Trotz said. “It wasn’t coming easy. The other team had a lot to do with that. We were getting a little frustrated. We had to battle back, we had a good response and we just kept staying with.

“Instead of getting discouraged we got determined, and to me, that’s a sign of growth for us.”

Saturday’s win had a much different feel than the previous night’s shootout loss to the Tampa Bay Lightning. The Islanders started the game with jump and attacked the Kings, which lead to an early goal from Casey Cizikas, but as the first period progressed the ice began to tilt the other way.

The visiting Kings eventually managed to even the score at one at the 8:07 mark. It was the first even-strength goal the Islanders had surrendered in over 237 minutes.

Los Angeles also outshot the Islanders 13-8 in the second period.

While the pace was much different than the night before, the Islanders found themselves with scoring chances throughout Saturday’s win. Kings starter Jonathan Quick finished the game with 28 saves, which included a third period stop on Anthony Beauvillier during a two-on-one rush.

Not to be outdone, Robin Lehner finished the game with 34 saves in the win, coming up clutch during the penalty kill and making a diving stop on chance by Ilya Kovalchuk.

“He played awesome again,” Johnny Boychuk said about Lehner’s performance. “He’s been playing awesome all year. Both our goaltenders and they’ll have to continue to do that to have success.”

Cizikas’ goal at 6:09 of the first period opened the scoring Saturday night. The goal was his 12th of the season as Cizikas continues a career year.