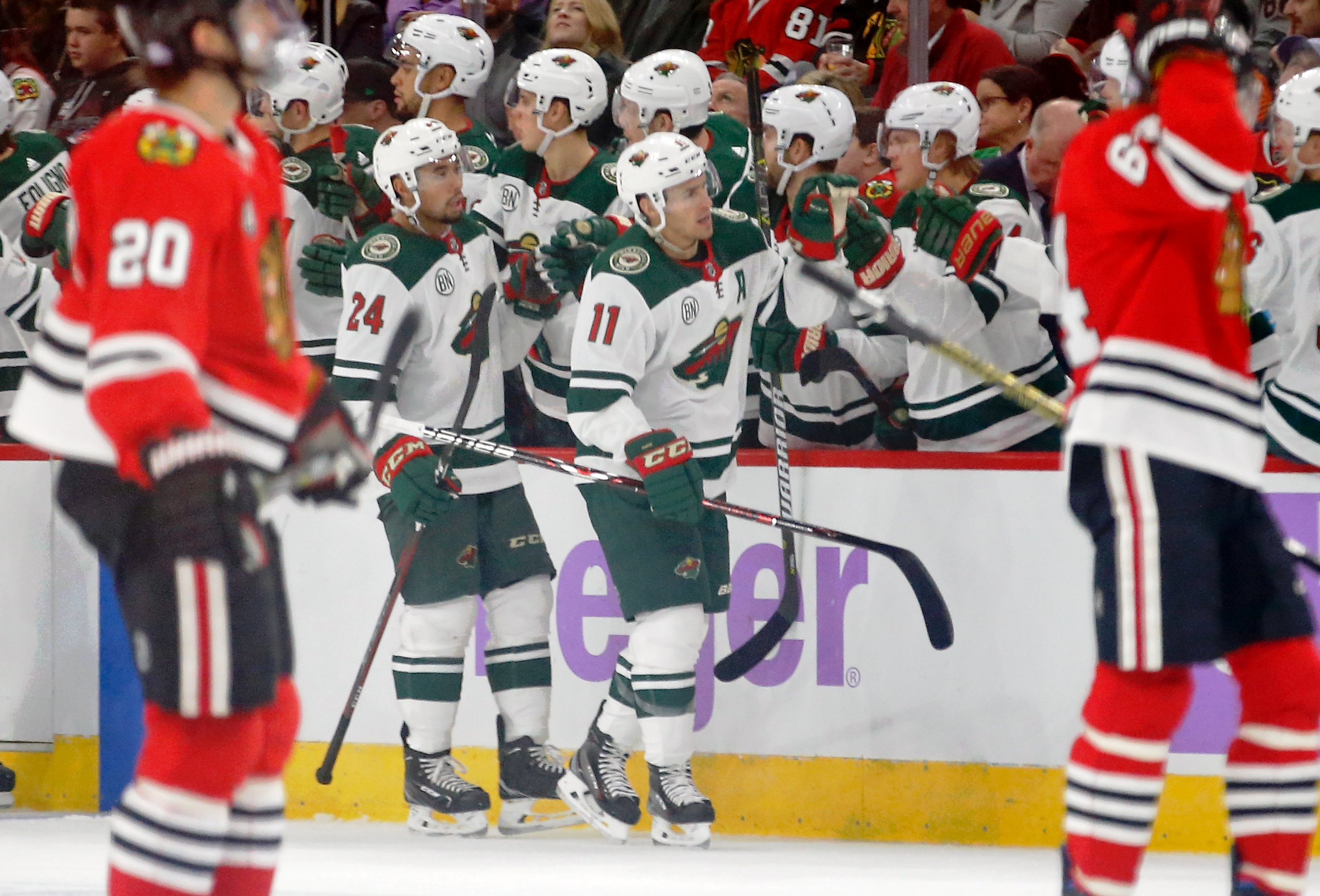 Minnesota was in 3rd place in the Central Division, knowing it has to make try to get out to a fast start in the final 1/3rd of the season but instead of flying out of the gate the team mostly sleepwalked to a 3-1 loss to Dallas last night.  It was pretty uninspiring and the kind of slow start you might expect from the oldest team in the league.  While the Wild have often tried to dismiss that fact, its clear the team is starting to show its age and not in a good way.

With Wild General Manager Paul Fenton trying to make a decision as to whether this club should be a buyer or a seller at the trade deadline in a few weeks I can’t imagine last night’s effort will make him bullish on that result.  Chicago on the otherhand is at the bottom of the standings but climbing the ladder rapidly with an explosive offense and they come to town after blowing out the Sabres last night.  Will the Wild wake up to earn a win on home ice against Chicago?

1st Period Thoughts:  The Wild would go on the penalty kill right away as Drake Caggiula drew a hooking call on Jared Spurgeon in the opening seconds of the game.  Fortunately, the Wild penalty killers were ready to move their feet and and they kept the Blackhawks to the perimeter and nothing really tested Alex Stalock and Minnesota would get the big kill.  With Pontus Aberg out with an injury, the Wild had to reshuffle their lines and Victor Rask would dish a pass to Jordan Greenway who then tried to set up Marcus Foligno for a chance that he shot wide of the mark.  A few minutes later the Wild would have a golden opportunity as Ryan Suter threaded a long pass to Eric Staal to spring the veteran center for a breakaway who fired a wrist shot that was steered aside by Connor Delia.  The Wild would draw their first penalty of the game as Jordan Greenway used his size and strength along the wall and half wall to draw a hooking call on Connor Murphy.  Minnesota would capitalize on the power play as Mikael Granlund was able to feed a short pass to Jason Zucker for a quick shot that beat Delia.  1-0 Wild.  Granlund did a nice job of using Staal as a decoy.  The Wild would put their 4th line to work after the goal and a point shot by Nick Seeler was redirected by J.T. Brown that forced Delia to make a fine glove save.  Minnesota’s hard work continued to cause fits for Chicago as Foligno was hauled down by Brent Seabrook giving the Wild another power play.  On the man advantage the Blackhawks were giving Granlund plenty of time and space, but he wouldn’t pull the trigger.  Minnesota did manage to get the puck to Brad Hunt who blasted a shot that Delia stopped.  The Wild came up empty on the man advantage but they continued to control the pace of play.  Brendan Perlini would get a step on Hunt who had no choice but to hook him down and he’d be awarded a penalty shot.  Perlini would take a winding sort of approach down the ice where he tried to fire a shot 5-hole that Stalock got his paddle on the puck and he’d hold onto the puck by squeezing the leg pads together.  Big save.  The Wild seemed to be content to hold onto a 1-goal lead, but after a few listless minutes they’d go back on the attack.  Victor Rask would make a nice little saucer pass to Greenway who flipped a backhander on goal that Delia dismissed.  Chicago would benefit from a phantom call late in the period as Erik Gustafsson sort of turned and fell and they gave Staal a tripping call for simply being close by.  Stalock would give Minnesota’s penalty killers a boost with a big save on a shot by Dylan Strome.  The Wild kept Chicago the perimeter and they’d take their 1-0 lead into the 1st intermission.  Chicago had just 20 more seconds with the man advantage carrying over to 2nd period.  A better opening effort by the Wild in comparison to what they put forth last night in Dallas.

2nd Period Thoughts:  Minnesota would kill off the remainder of the Chicago power play, but not without a little bit of drama as Stalock went way out of his crease to make a save and then played the puck up so the Wild could go on the attack.  Perhaps feeling the game was getting away from them Chicago sent out John Hayden to drop the gloves with Matt Hendricks.  It was more of a wrestling match than a fight; as Hendricks landed a good hook before he dodged a left handed punch by the former Yale grad Hayden.  Slight edge to Hendricks as both players would go to the box for 5 minutes for fighting.  A few minutes later the Blackhawks finally managed to find Patrick Kane with a long pass for a partial breakaway but his long range wrister was steered aside by Stalock.  The Wild would have a great chance of their own as Charlie Coyle fed a pass to Zach Parise that he pushed just wide of the mark.  As is the case of hockey karma, when you miss a golden chance it will come back to haunt you as the Blackhawks would tie the game a few minutes later as Alex DeBrincat got a little time and space and he’d let go a wicked shot that beat Stalock.  1-1 game.  The goal seemed to give Chicago a big boost of confidence and suddenly they were pushing the pace of play and the Wild looked like a team that was starting to feel the pressure.  The Wild started to find themselves spending more in their own end of the ice.  Minnesota would try to ramp up the physical play as Foligno delivered a big hit on Murphy which drew an appreciative cheer from the home fans as the check shook the glass loose.  The Wild seemed to lack energy and Chicago started to win some of the small races for the puck and they’d take advantage of Minnesota’s lack of hustle as Gustafsson would blast a slap shot that beat Stalock 5-hole, 2-1.  The Wild would challenge the play was offsides and it was tough to see the puck against the dark contrast of the Minnesota player’s jersey and if the puck was across before Dylan Strome was.  The review took a fair amount of time, but the officials ruled the play was not offsides and Gustafsson’s goal stood and Minnesota would then receive a delay of game penalty for their failed challenge.  Minnesota’s penalty killers did a good job of challenging the zone entry and not allowing Chicago to get settled in the offensive zone through the first minute of the power play.  Chicago finally worked the puck into the Wild zone, and Jonathan Toews‘ had two great chances from in close only to be stonewalled by Stalock.  Minnesota would get the kill but Chicago remained on the attack in the closing minutes of the period.  The Wild would have a power play late in the period, but at the critical moments couldn’t get a stick on a puck to take advantage of a sprawling Chicago goalie and Chicago would hold onto its 2-1 advantage going into the 3rd period.  One step forward, two steps back.

3rd Period Thoughts:  Minnesota was unable to take advantage of the remaining seconds of power play time, but good hustle a few shifts in would draw another Chicago penalty.  On the power play the Wild settled for shots from the perimeter and they had a few ok chances that Connor Delia fought off.  Greenway drew this power play but for whatever reason the Wild continue to not want to use him on the man advantage instead opting to use Rask in the ‘bumper’ role instead.  The Wild would net the equalizer as Mikko Koivu took a shot from the high slot that went just underneath the glove of Delia.  2-2 game.  Minnesota seemed hungry for the go-ahead goal but a cross check by Greg Pateryn would put that effort in jeopardy with under 6 minutes left in regulation.  The Wild penalty killers appeared tired and scrambling as Chicago moved the puck around quickly and it was Toews redirect a feed from Kane to give the Blackhawks a 3-2 lead.  The Wild would tie the game back up a few minutes later as Jordan Greenway won the race for a loose puck in the Chicago zone and he’d swing a pass out front to Rask who buried it for his first goal since coming to Minnesota.  3-3 game.  Minnesota tried to pour it on for go ahead goal as Granlund set up Staal right at the top of the crease that Delia sprawled to stop.  With around 30 seconds left in regulation, Suter would send a puck up into the stands for a delay of game penalty as the game went to overtime.

Overtime Thoughts:  The Blackhawks would start overtime with 1:42 of power play time to have a 4-on-3 advantage.  Chicago moved the puck around with impunity as Minnesota stayed in a fairly tight triangle in front of Stalock.  The Wild did their best to contest the shots but Chicago would make it count as Gustafsson ripped a blast from the point that beat Stalock.  Chicago wins 4-3.