Your Morning Dump... Where the Celtics survive the noise, nonsense and distraction in NY 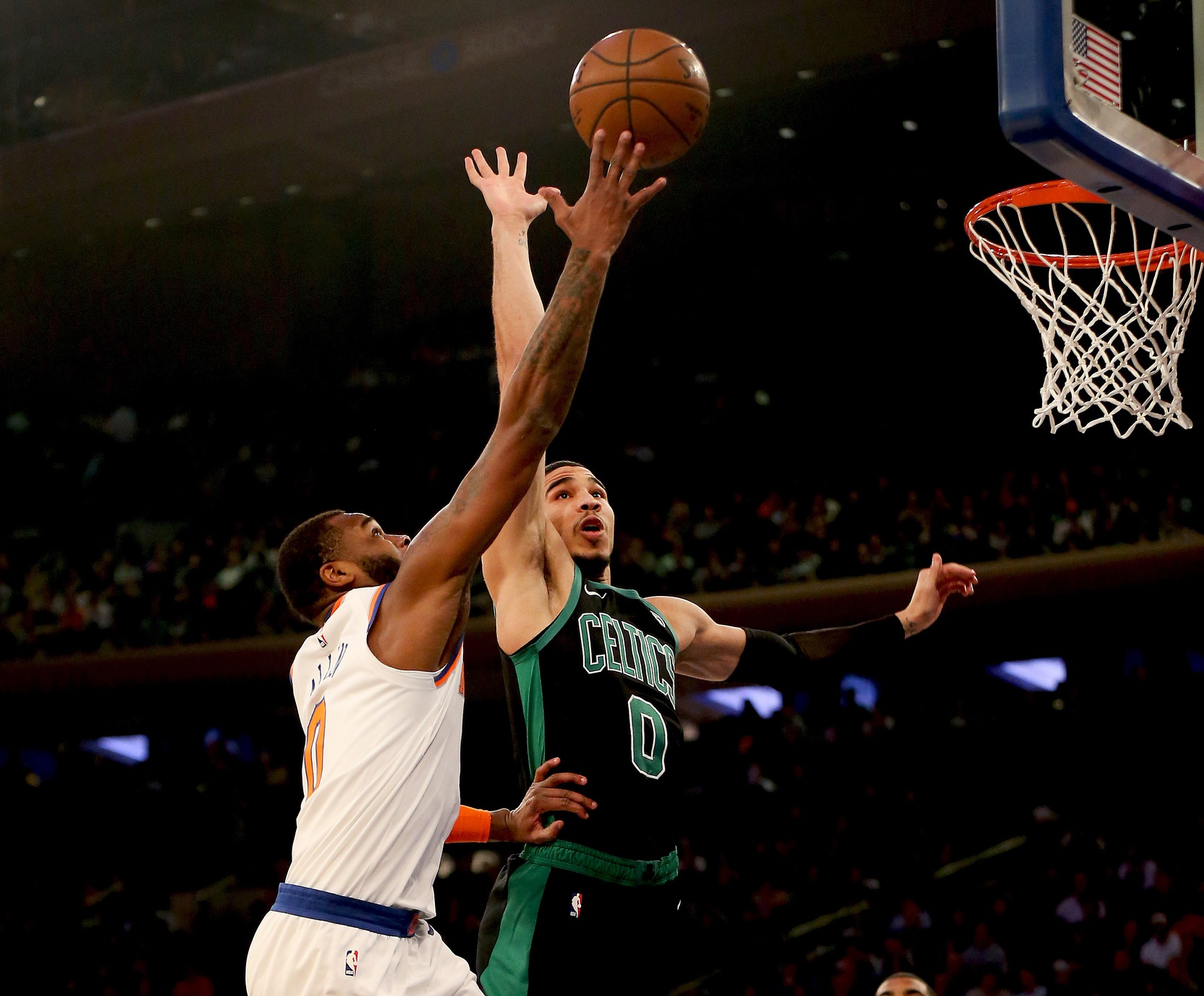 Your Morning Dump... Where the Celtics survive the noise, nonsense and distraction in NY

“It’s nothing but a distraction at this point,” Irving said later after giving his father, Drederick, his game jersey and a hug. “Like I said, I’m appreciative of the fan support I get in any arena but of course coming back home (and) obviously what’s going on in terms of that noise and commentary is just a bunch of nonsense right now. You know, you can’t do anything about it. So I’m just accepting, I’m appreciative, but at that same time I got a game to focus on.”

He added, “What has been said, what has been circling around in terms of extra commentary, I kind of figured it was going to be like that tonight. I’m just happy we got the win and I’m ready to go back to Boston.”

Asked later if he expects the speculation about his free agent decision will quiet down or last until July 1, Irving said, “I think you know the answer to that, man. Obviously you would hope it would quiet down, but, like I said, it doesn’t help when across the league it’s just outside noise again, and my name gets thrown into it. And then conversations, speculations, everybody’s worried about their credibility. I don’t know how this media empire works. I know it’s a bunch of nonsense to me. So I have a focus in winning a championship this year, and that’s where my focus is going to stay.

Things will calm down… on February 7th after the Lakers game. Until then, Kyrie, his teammates, and we fans are going to have to deal with it.

Paraphrasing: What really drives Kyrie nuts in all this hoopla is the notion that he needs to piggyback on Kevin Durant or Anthony Davis or [insert any superstar’s name]. He left that behind in Cleveland. It’s why he wanted out from LeBron James.

If there’s any truth to that, I’d say it belongs in the “Pros” column for Boston.

The media infatuation with New York continues to drive me crazy and boggle my mind. Let’s check on the Knicks success rate with big free agents:

Yet, every year, the Knicks are in the running for the big fish. Look at this list of their top FA signings in recent history. It’s pathetic.

One final thought on NY: the Knicks have won ONE playoff series in 18 years. Let that wash over you for a moment.

On Page 2, Anthony Davis Sr. uses IT4 to take a shot at the Celtics.

“I would never want my son to play for Boston after what they done to Isaiah Thomas,” Anthony Davis Sr. told ESPN on Friday, referencing the former Celtics star point guard who was traded for Kyrie Irving amid his recovery from a hip injury. “No loyalty. Guy gives his heart and soul and they traded him.”

Davis Sr. clarified that this is solely his opinion, and he can’t speak for his son.

“This is just my opinion, not Anthony’s,” he said. “I’ve just seen things over the years with Boston, and there’s no loyalty.”

There’s no denying that the Thomas/Irving trade was the shrewdest of business moves for the Celtics. It was also a no-brainer and one every GM makes.

But I’ll play the game and refute Mr. Davis. Let’s start with the fact that Isaiah was very clear about his Brinks truck-sized expectations for the next contract. Is there loyalty if the Celtics don’t agree on the financials and Thomas takes someone else’s money?

And… just how loyal were the Cavs, i.e. LeBron, when they traded Thomas at the deadline last year? Isaiah rushed back from injury only to get the coldest of shoulders from LeBron.

And… LeBron is more ruthless than any GM. He gets coaches fired, orchestrates trades for his buddies, then leaves town when it suits him.

With all due respect Mr. Davis, get outta here with that nonsense.

And finally, the Lakers first offer to the Pelicans is LAUGHABLE.

The Lakers have limited offers to two of the franchise’s top young players in every proposal, and resisted including more than a single first-round pick in offers, league sources said.

The grouping of Kuzma, Brandon Ingram, Ivica Zubac and Josh Hart are included in different Lakers scenarios, but only two of these to an offer, league sources said. For the Pelicans to agree to a trade before Thursday’s deadline, it would seem likely that most, if not all, of those players would be included into packages — with multiple first-round picks.

Even Magic Johnson knows you don’t open with your best offer, but you at least come to the table with something reasonable.