Bucks give Wizards a look at potential playoff future 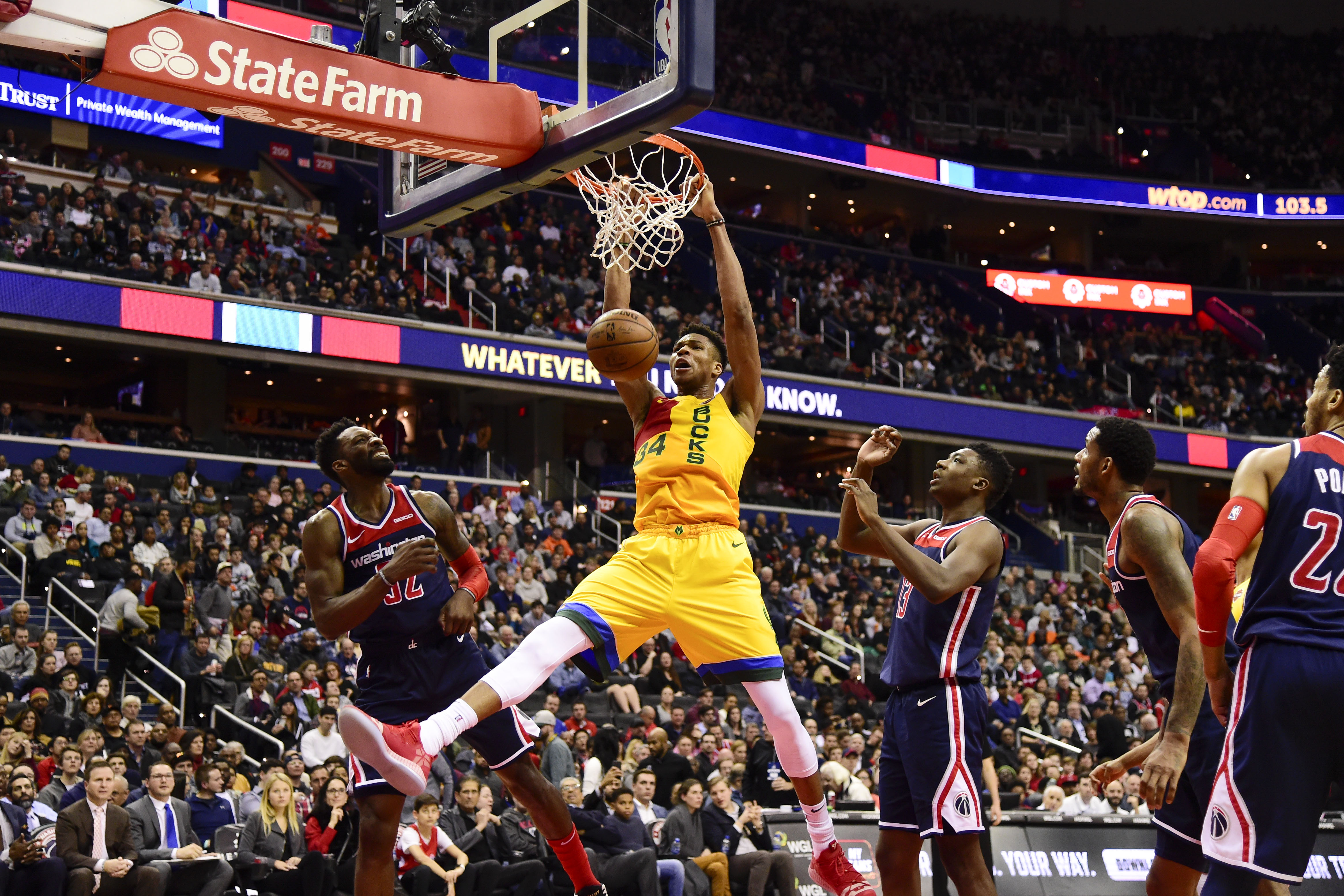 Bucks give Wizards a look at potential playoff future

The Washington Wizards want to make the playoffs and that is admirable and still a decent likelihood of happening, but when Ted Leonsis said “anything can happen” in the playoffs on WTOP radio he was selling false hope. The Wizards would barely sneak into the playoffs as a No. 7 or 8 seed and likely have a matchup with an elite team such as the Milwaukee Bucks. If Saturday night’s trouncing at the head of Giannis Antetokounmpo is any indicator, Washington will have an uneventful four games of playoff basketball in 2019.

The first minute of the game could not have gone better for the home team. Tomas Satoransky had a monster posterizing dunk on 7-foot Brook Lopez that quickly triggered a Bucks timeout. Washington led 5-0 and then Milwaukee never looked back. A quick 18-4 run by the road team later and the Wizards would never get closer than seven for the rest of the game. In the first half, the Bucks had as big as a 26-point lead that they then stretched to 32 in the third quarter. Things were ugly for the Wizards.

ON HIS HEAD @satoransky pic.twitter.com/8L05Gv2jjV

In the matchup between the two teams last month, Giannis Antetokounmpo did not play so Washington was able to pull out a victory. Big difference when the MVP candidate is on the court as the Greek Freak went for 37 points and 10 rebounds in 33 minutes of play. Antetokounmpo had 17 free throw attempts (and makes) in the game, which Bradley Beal called outrageous given the lanky forward has 12 attempts to the Wizards’ seven at halftime. Antetokounmpo was getting almost every whistle that could go his way, getting to the rim with ease, or both.

“Giannis [Antetokounmpo] is a pretty good player,” Scott Brooks purposely understated. “The way he’s playing right now, the 12 free throws that he got in the first half, and he was 12-for-12, 17 for the game. It’s hard to stop. His strides are so long. It’s tough to stop. He just comes at you, and he’s strong. He’s improved their strength. He’s hard to guard.”

Even without Eric Bledsoe, Antetokounmpo had plenty of help. His fellow All-Star Khris Middleton had 20 points, seven rebounds, and six assists in less than 30 minutes of play. Brook Lopez has reinvented himself and continues to excel with 21 points and six rebounds in 27 minutes of play. Malcolm Brogdon, George Hill, and Tony Snell also chipped in with double-figures. Milwaukee as a team shot a perfect 100 percent on 24 free throw attempts and complimented that with 43.6 percent (17-of-39) shooting from beyond the arc. When the Bucks are making their jump shot, they are arguably the best team in the NBA let alone the Eastern Conference.

The Wizards did not have their three-point shot working until it was well too late on Saturday night. Through three quarters they were just 5-of-21 from deep. The team still managed to put together a solid offensive performance led by Bradley Beal’s 24 points. Otto Porter started despite a left big toe sprain ailing him and was able to put up 18 points on 7-of-14 shooting. Jeff Green came off the bench with 20 points, but on 6-of-17 shooting from the field. Trevor Ariza, Thomas Bryant, and Tomas Satoransky also were in double-figures. To no surprise, the Wizards are not putting too much stock in this one game predicting a playoff series, but it is a pretty reasonable sample size of Bucks domination.

“We’ll be alright, we’ve got another one on Monday,” Beal said when about a potential playoff matchup. “The playoffs aren’t here yet. There was a message that [the Bucks] were sending. We play them again next week so I took it as they were sending a message for next week.”

“We will come back from it,” Bryant said. “We can’t dwell too much about this one. We know we got them again. It’s a long season, so we got to keep staying the course, and you never know how things can change.”

If the #Wizards make the playoffs, they could be facing the #Bucks in the first round.
Bradley Beal send "definitely that was a message that they were sending." pic.twitter.com/WD35mtu72U

Leonsis has publicly and privately stated the Wizards current goal this season is to make the playoffs. Ernie Grunfeld’s job may just depend on it so Washington may even be buyers up until the Thursday trade deadline, but the first-round pick is likely not in play. If anything, the Wizards should be probing the market to see if they can add a protected first-round pick by trading away Ariza. Maybe they can combine Green and Markieff Morris into a second-round pick and/or shedding salary to get under the luxury tax. That would be my course of action because what exactly do you accomplish by maybe making the playoffs just to get embarrassingly swept by a team like the Bucks?