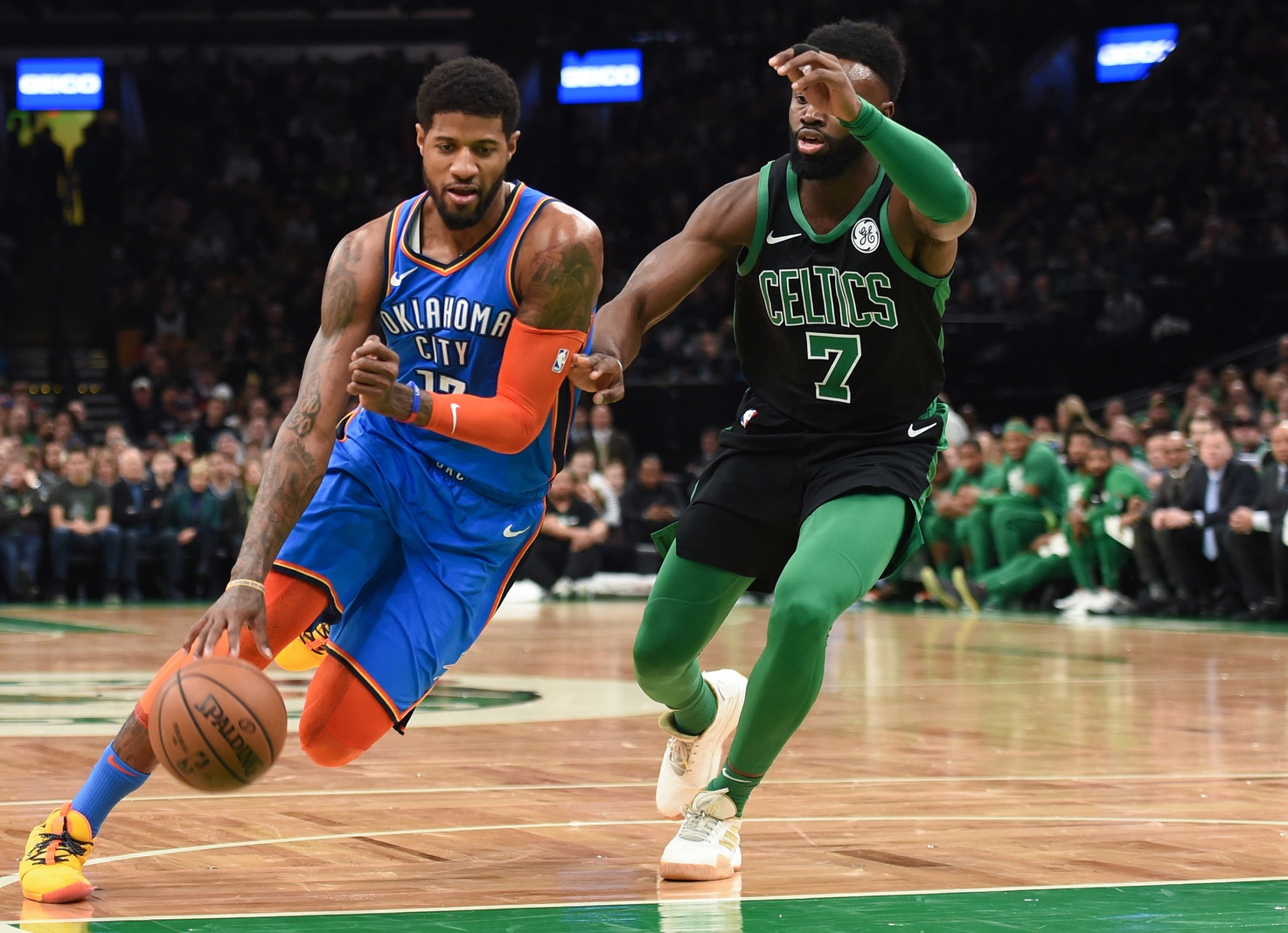 IN A NUTSHELL
Well at least there aren’t any rumors of Kyrie Irving somehow going to OKC, because JESUS HAROLD CHRIST this past week or so has been insufferable. We’ve just got a great game between the Boston Celtics and Oklahoma City Thunder, two teams near the top of their conferences regardless of standings (given how the Cs have played of late).

The contest lived up to its marquee status: closely matched all the way through, with Kyrie putting on his usual show—but with a boatload of support from nearly everyone else on the Celtics roster. Russell Westbrook kept his triple-double streak alive, Paul George continued playing like an MVP and the Thunder defense was as tough as advertised, but Boston held their mud despite a few bad stretches in the second half, to sweep the season series against Oklahoma City with a hard-fought 134-129 win.

WHAT WENT RIGHT
For a team surrounded by a crap-maelstrom of drama as Boston currently is, it hasn’t affected the on-court product lately. The entire first half of this game featured the Celtics as locked in as they have all season, barring a few dopey turnovers. Perhaps most enthusiasm-inducing was the Cs’ ability to match OKC’s hard-charging game inside the paint. The Thunder are in fact No. 1 in second-chance points and forced turnovers due to this strength, per the legendary Hubie Brown on the ABC/ESPN broadcast. But Boston managed to counter the majority of OKC’s punches in that department, with the Cs’ offensive success in the painted area juking their shooting percentage to almost 60 percent at the halftime buzzer, [blank] for the game.

The second half featured a resilience on Boston’s part akin to the team we  saw last year that just plain bullied teams defensively, and so often became a comeback machine when other squads caught them slipping. More importantly it’s a world away from the bouts of inconsistency that have surfaced this year. Especially in the waning minutes of the fourth quarter when OKC started to smell blood and winnowed their deficit down to two points, the Celtics held their ground and kept things enough in control to seal the victory.

WHAT WENT WRONG
Boston had no easy answers for Steven Adams. You need Baynes to match the raw wombat-on-PEDS bullyball of Adams, and he was out with an injury. (Horford can, in a vacuum, defend someone like Adams, but the OKC center is so willing to steamroll dudes that Uncle Al’s respectable efforts just weren’t gonna cut it.) George presented another conundrum: he’s borderline unguardable with an incredible suite of offensive skills.

In the third quarter things got hairy for a while. The Thunder went on a tear largely driven by George’s offense and their team-wide vicegrip defense. A similar thing happened toward the very end of the fourth as Westbrook tried to get on his superhero-ball tip and at one point got the game back within 2 for OKC. Which he immediately followed with two consecutive blunders of Ionesco-esque absurdity—a butterfingers turnover forced by Irving and then failing to miss a second free throw correctly to create a rebound opportunity—but the Cs could’ve thrown the game away at the last second.

One last thing: The only Celtic who didn’t score in double-digits and actually saw playing time was…Gordon Hayward. Shocking. Thing is, I don’t even need him to be a big scorer if he’s doing other things really well, like rebounding and throwing dimes, and to his credit the passing has been quite good. But a 23-minute performance featuring 3 points, 3 rebounds, 2 dimes, a steal in two turnovers doesn’t exactly inspire confidence.

Kyrie winning control of the jump ball to throw a wicked dime on the break for a Tatum slam:

Outstanding ball movement leading to one of those gorgeous Kyrie teardrop shots:

The pass? 💯
The finish? 💯 pic.twitter.com/cZ9F8CPRGj

PUT SMARF IN THE THREE-POINT CONTEST YOU COWARDS: