Your Morning Dump… Where there’s a big game today – okay sure, the Super Bowl, but first: Celtics-Thunder 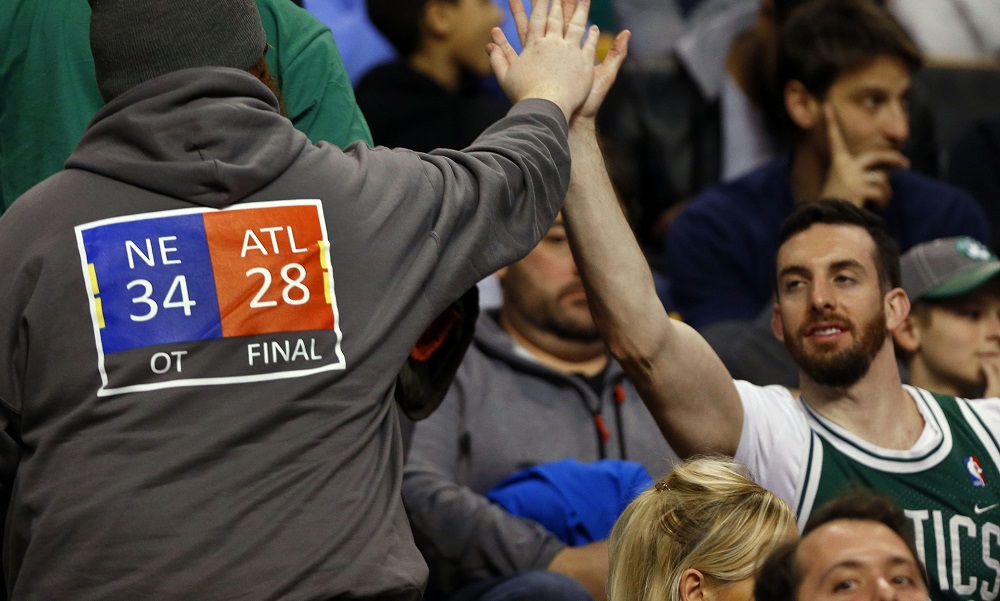 Your Morning Dump… Where there’s a big game today – okay sure, the Super Bowl, but first: Celtics-Thunder

The Celtics will celebrate a decade of Super Bowl matinees when the Oklahoma City Thunder visit Sunday at 2 p.m.

While the NBA typically goes light on Super Bowl Sunday, the date has become a staple for the Celtics. It’s a family-friendly day given the early tip time but it’s also a nice diversion for folks trying to fill time before the 6:30 kickoff.

The success of the Patriots has only added to the mystique of the day. The Patriots have been in the Super Bowl in five of the 11 games since the streak started in 2009. It’s fun to watch even the players race out of the arena after the game in order to get to their own Super Bowl parties.

It’s been a solid day for the Celtics with the team posting an 8-2 record in that span. We’ve seen some fun games lately, too, with Al Horford hitting a buzzer-beater last year and Paul Pierce hitting a last-second 3-pointer in his final visit to Boston the year before that.

The first time the Patriots made it to the Super Bowl was in 1986, and that afternoon Larry Bird’s Celtics hosted their rival Philadelphia, led by Julius Erving, Moses Malone and Charles Barkley. Kevin McHale didn’t play, but the Cs won a tense battle, 105-103. Then everyone rushed home to watch our Patriots … who got crushed by the Bears, 46-10.

Based on history, things should turn out better for both local teams today:

…this is actually the 8th time the Celtics will play before a Patriots Super Bowl.

(Only once did it not work out…but it didn't work out for Pete Carroll that day either.)

Although, some bad news:

It’s going to be a long day, and here’s to bringing home two Ws.

On Page 2: Your turn, Celtics fans

Throughout the game Friday, the fans at Madison Square Garden showered Irving with “We want Ky-rie!” chants as he dropped his 13th double-double of the season on them, scoring 23 points to go with 10 rebounds as well as dishing out six assists.

When asked about the chants, Irving told reporters, “It’s nothing but a distraction at this point. I’m appreciative of the fan support I get in any arena. Of course, coming back home (Irving grew up in West Orange, New Jersey) and what’s going on with that noise and commentary, it’s a bunch of nonsense right now.”

NBC Sports Boston: How will Celtics fans react to Kyrie Irving and his up-in-the-air future in Boston?

According to a source close to Irving, he’s shared his frustrations this season with Celtics’ management, but the conversations were said to be in more of a ‘How can we get this right?’ context.

Again, the club had to know all along there was always a chance he could decide in the end to move on, and it had to be thinking that possibility would grow if the Celtics hit some rough seas.

“So obviously things this season haven’t gone as I planned,” Irving said Friday, “and, you know, that’s part of being on a team where you’re still trying to figure things out.”

But management couldn’t have been ecstatic with the full range of his comments that morning, and the question now is what effect it might have on the product going forward. Does what was said in some way hurt the Celtics’ chance to reach the goal Irving laid out, which is to win a championship this year with this team?

I was at that game in MSG, and the chants from Knicks fans were sporadic and not as loud as media reports made it sound. Actually, the New York crowd displayed very little energy during the game. Perhaps they were bummed that their best player had just been traded. Or maybe they knew their shorthanded team had little chance to beat Boston. Or both.

Really, what got them most excited were the T-shirt tosses and the Kiss Cam.

But forget all that, because now it’s Boston’s turn. The Garden crowd needs to show Kyrie extra love, especially for the ABC national TV audience. It’s been a while since we’ve seen Kyrie smile. Today would be a good day for it.

And, finally… Conflict of interest

Mark Jackson is not beloved by NBA fans, yet manages to keep his job as a commentator for ABC and ESPN. But last night, he crossed a line.

Klutch Sports client Mark Jackson is on ESPN telling the country that the Pelicans should have accepted the Lakers low ball offer. That’s pretty low. pic.twitter.com/40Gq5DaP0t

Mark Jackson just said NO should take that Lakers offer of Ball, Kuzma, Rondo and Beasley. He should be fired immediately

Mark Jackson wants the New Orleans Pelicans to trade Anthony Davis now. Definitely has nothing to do with him being a rumored option as the next Lakers coach. Nope nope nope nope nope.

In his TV role, Jackson is a media member, and he needs to abide by journalistic ethics. If Jackson wants to publicly support his own agent’s agenda of trying to get Anthony Davis to L.A., that’s fine – but he must disclose his own relationship with that agent. Otherwise, it’s a conflict of interest, which should be a concern to his employer.

With all this talk about the Davis situation, especially leaks of information and disinformation, will Commissioner Adam Silver might step in and tell everyone to cut the crap?

NBC Sports Boston: Zion Williamson: “It would be dope to play with Kyrie Irving and Kevin Durant” (settle down, youngblood)

Globe: What was Kyrie Irving’s motivation for saying what he said about his future?  |  Anthony Davis’s departure will be all on the Pelicans