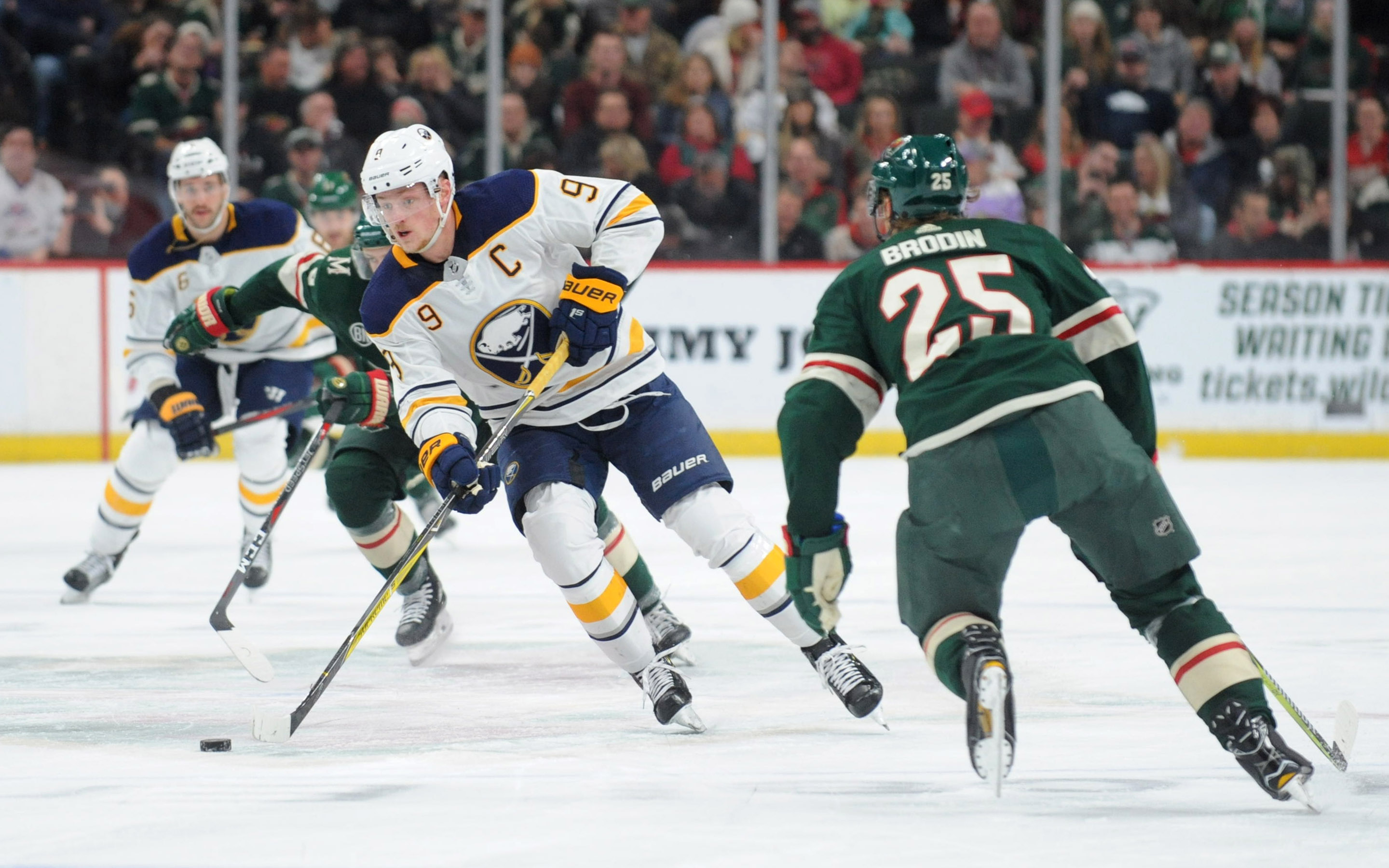 I am not the kind of person that puts a lot of stock in astrology, but is there something with the stars of the planets that make so whenever the Minnesota Wild find itself at a crossroads of some sort, there next game is against the Buffalo Sabres?

A few years back, after an horrendous loss in Philadelphia, the Wild brought newly acquired Devan Dubnyk to sad sack Buffalo and saved Minnesota’s playoff hopes and arguably then Head Coach Mike Yeo‘s job.  The next season after that where the Wild suffered through its winter swoon a victory against Buffalo stemmed the free fall and they went on a remarkable run to another playoff berth.  So here we are again, on the precipice of missing the playoffs for the first time in six seasons and the Wild are taking on the Sabres.

The only difference?  This is not the same sad sack team that has been cannon fodder for their opponents.  Being bad for as long as Buffalo has been has allowed them to stock the cupboard with high draft picks, including two supposed uber talents in Jack Eichel and this year’s 1st overall selection, Rasmus Dahlin.  But its more than these two players that are bringing on a Sabres’ resurgence.

Part of it is the maturing games of many of its still fairly young core of players whom their opponents took advantage of in the past now facing a club that is deeper, better balanced and has learned from its mistakes.  Toss in new bench boss Phil Housley and you have a team that plays with more confidence and dare I say it, even a little swagger.

Up front, the Sabres traded for Jeff Skinner who has been a huge catalyst for Buffalo offensively and is having a career-best season which will likely yield him a big pay day from his current $5.75 million deal as he’s set to be an unrestricted free agent this summer.  The Sabres are certainly trying hard to re-sign the sniping winger but if they can’t reach a deal they may have to deal him so don’t let him walk for nothing in return.  Jack Eichel hasn’t quite been the impact player some felt he might be after going 2nd overall to Connor McDavid in 2015, but he still very good.  Another 2nd Overall pick, this time from 2014, Sam Reinhart rounds out the Sabres top line and has had a decent rebound from an underwhelming season last year.

Secondary scoring has been the trouble spot for the Sabres, because Buffalo has a variety of options like Jason Pominville, Connor Sheary, Tage Thompson, Evan Rodrigues and former Eden Prairie star Casey Mittlestadt who has had his share of growing pains thus far in his rookie season but no one has really stood out.  Kyle Okposo is a $6 million dollar winger (under contract for 4 more seasons after this one) plying his trade on the 4th line, ouch.

On the blueline, even though wunderkind Dahlin has had his moments the real star is Rasmus Ristolainen.  He’s the Sabres two-way workhorse and plays the most minutes in a pairing with the steady and reliable Eau Claire, Wisconsin-native Jake McCabe.  Fiesty Nathan Beaulieu and Zach Bogosian make give the Sabres blueline a dose of sandpaper and Marco Scandella is on Buffalo’s 3rd pairing at $4 million a season. (ouch again)

Between the pipes has been the unsung part of the Sabres’ success story as Carter Hutton and Linus Ullmark have combined to provide solid goaltending most nights and have given Buffalo a fair chance to win.  I would expect Hutton to get the start against the Wild because of his relative experience against us in his days with the Blues.  Expect the Wild to start Devan Dubnyk as not only are the desperate for a victory but he should be somewhat rested since he hasn’t played since Friday.

Minnesota did see some improved play with some of the changes it had to make with the injury to Pontus Aberg against Dallas.  Zach Parise seemed to be more comfortable on a line with Mikko Koivu and Charlie Coyle and the 3rd line of Jordan Greenway, Victor Rask and Marcus Foligno was surprisingly effective.  Greenway continues to impress with his strength and assertiveness and its about time the Wild start to consider giving him some time on the power play where I think his size, reach and strength on the puck could make him a nightmare for opposing penalty kill units.

Jason Zucker, Mikael Granlund and especially Eric Staal got a ton of chances on Saturday night, but too many times they couldn’t bury them but still it was good to see them causing havoc offensively. Maybe its just me, but Granlund doesn’t seem to have the small burst he used to and one has to wonder if he’s laboring with some kind of nagging injury that has slowed him down.  He isn’t taking the chance to pull the trigger enough either and while he’s had some great set ups, he will only make himself that much more dangerous if he’s a little more selfish at times.

Defensively the Wild need to have some kind of ‘Come to Jesus’ moment with its alternate captain Ryan Suter.  Suter still logs the most time of any Wild defenseman, and while he may not give excuses as he is still recovering form his broken talus bone, I don’t think he’s helping the team’s cause by being tired (or sore) either through extended shifts.  Saturday’s costly delay of game penalty is a great example of what happens with a tired player and Minnesota threw away a chance at an important point in the standings.  Jared Spurgeon and Jonas Brodin seem to be able to pick up some of the slack.  Also, if Suter’s on the power play he needs to realize Brad Hunt was acquired to be the triggerman on the power play so he should try to set him up for the one-timer and not the other way around.

The Wild put J.T. Brown and Nate Prosser on waivers (both players cleared and were assigned to Iowa) on Sunday with the hope of making space for call ups Luke Kunin and Kyle Rau from Iowa.  With stay at home Fenton soldier Anthony Bitetto in the fold you knew Prosser’s days were numbered and Brown just never seemed to provide much in the way of energy people hoped he would.  He wasn’t a poor man’s Cal Clutterbuck where he was a hitting machine and often appeared to be a step (or two) slow to be able to have an impact.  Rau and Kunin will add speed and skill to the Wild lineup.

1. Checkers not Chess (thanks @THoen88) – Against Chicago, when the Wild had their foot on the gas they started to get picky and too fancy on the attack.  The Wild are at their best when they keep it simple, and funnel pucks on goal and crash the net.  When Minnesota does crash the net, they need to have a take no prisoners attitude and not be denied.  Flybys won’t cut it here.

2. Shut Down the Top Line – Buffalo gets most of its scoring out of its top line.  Skinner, Eichel and Reinhart are players like that like to create turnovers and attack in transition.  So Minnesota must be wary of being careless with the puck around this group but also force them to defend so as to limit their amount of scoring chances.

3. Don’t Beat Yourself – The Wild has a tendency to shorten its bench in the 3rd period and while that’s not unusual it may make this team vulnerable to mistakes as the result of being fatigued.  A fair portion of the Wild’s workhorses are 30+ years old, perhaps giving the 3rd and even 4th lines some more shifts in the 3rd will help keep the energy up so when you do want to lock it down in the last few minutes or make a late push you have legs to do so.

What do you think are the keys for a Wild victory?  Tell us on Twitter @CreaseAndAssist or in the comment section below!