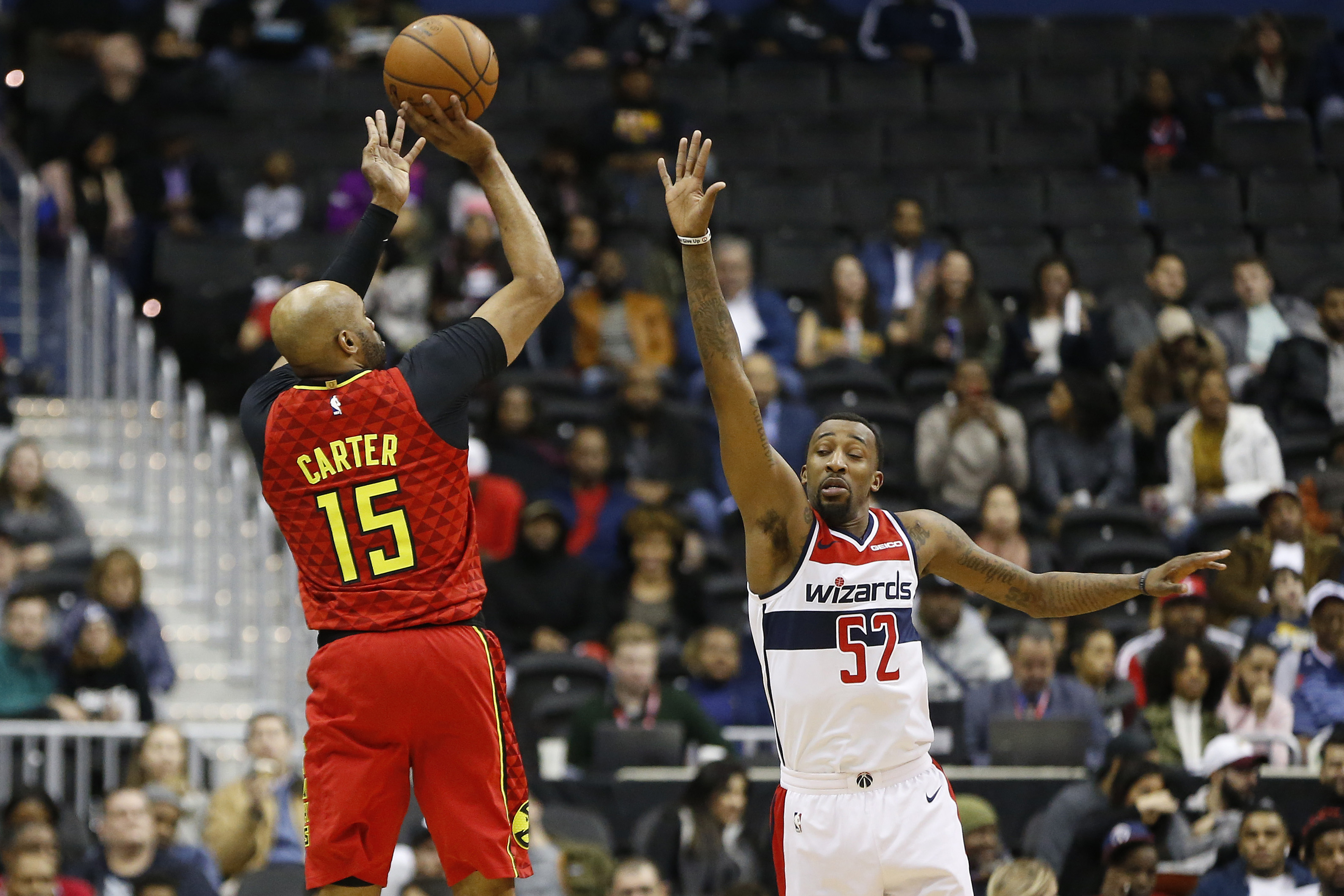 Bradley Beal was not lying to Ted Leonsis when he told the owner in London that the Washington Wizards still have enough talent to make the playoffs in the Eastern Conference. Talent has rarely been the issue for them. Living up to their potential, on the other hand, has undermined them for years. Not taking care of business against teams bound for the draft lottery has been a weakness of this team in recent seasons and it was no different on a Monday night with the Atlanta Hawks in town. Shades of Vinsanity from the 42-year old Vince Carter and poor three-point defense doomed Washington as they remain on the outside looking in on the playoff picture.

At 17-35, Atlanta is a team with a lot of nice young pieces but not making any waves this season. That does not mean they are full-on tanking like other franchises, and they play with the most pace in the entire NBA. Despite getting off to a 6-0 start, Washington still got punched in the mouth early as the road team then went on a 35-14 run to end the first quarter. In the first 12 minutes of play, the Hawks had 17 rebounds and shot 6-of-12 from beyond the arc, which was night and day better than the Wizards’ eight rebounds and 0-of-9 shooting from deep.

In a regular theme of the season, Washington dug themselves an early hole that they would have to spend most of the game getting out of, but they did. to a degree. Midway through the second quarter, the home team was down 19, but then went on a 21-8 run to cut the deficit to a mere three points. With a halftime deficit of just four, it was a new ball game again and the Wizards were decently positioned to take care of business after an early scare. Granted they would have to play smarter defensively in the second half and that did not happen as the Hawks began the third quarter on a 12-2 run.

Atlanta would hold a double-digit lead for much of the third quarter and in the fourth every time Washington would cut into the deficit, the Hawks would come right back with a matching bucket. The two teams combined for 78 points in the final quarter in an entertaining back-and-forth. Beal finally got cooking in the fourth with 18 points on 7-of-12 shooting and cut the deficit to four with less than two minutes to play, but then Taurean Prince immediately answered with another triple. The Atlanta forward made all four of his three-point attempts in the final four minutes of regulation to keep Washington at bay. As a team, the Hawks were a flaming 20-of-41 (48.8 percent) from beyond the arc.

Scott Brooks attributed Atlanta’s hot shooting for the game to them getting in an early rhythm when the closeout defense was lacking leading to contested shots late still falling. Prince had five three-pointers in the game along with Maryland product Kevin Huerter, while Omari Spellman and Carter each had four long balls off the bench. Jeff Green agreed with his coach’s assessment that allowing the Hawks to get comfortable early made all the difference at the end of the game even when the Wizards were trying to lock down.

“Tonight we couldn’t guard the three-point line,” Brooks pointed out the obvious. “We came up short on all of our closeouts, and they made shots. And then we tried to and we did have good closeouts, then they made shots because they were hot and they were filling up and the basket became as big as an ocean. We couldn’t get the stops that we needed. They were feeling good, and then they banked one in. It’s about guarding the three-point line. They took 41. We knew that they were going to be a three-point shooting team. We knew that we were going to switch. We had some coverage mess ups. You got to close out alternate shooters and they got guys just do that alone and they do it at a high level. We were short so many times.”

Late in the game, Brooks relied on a lineup for Beal, Jordan McRae, Trevor Ariza, Otto Porter, and Green. Off the bench, Green earned the playing time with another high-volume offensive performance of 26 points on 9-of-19 shooting. He took Thomas Bryant’s minutes as the second-year center only played 12 minutes and was -14 on the game. McRae received crunch time minutes for his stellar work in the first half of 13 points in nine minutes on 5-of-7 shooting, while Beal was hindered in a little bit of foul trouble.

This made Tomas Satoransky the odd man out as Brooks rolled with a no point guard, no traditional center lineup. The Czech native may have been in line for his second career triple-double if he was not benched for his second fourth quarter in as many games as he had 11 points, nine assists, and seven rebounds in 29 minutes. Satoransky arguably should have been reinserted late in the game for Porter who was so-so with 13 points on 5-of-13 shooting and eight rebounds in 38 minutes. Brooks commented before the previous game Saturday against the Bucks that it was “shame on him” for not giving Satoransky more playing time earlier in the season even when John Wall was healthy.

Brooks took unusually long to talk to the media after the game, which allowed Beal, Satoransky, and others to quickly exit, without answering questions, before the locker room was opened to reporters. It is something Beal has done a handful of time each season and left McRae and Green to speak on behalf of the team following another head-shaking loss. Neither player has been on the team for long enough to answer questions about systematic issues so neither were properly informed, especially coming off the bench, to speak to the idea that Washington came out slow because of overlooking Atlanta and their poor record. Beal signaled such was the case in the team’s recent loss against the woeful Cavs so it would have been ideal to get his opinion on another bad loss, but that opportunity was not available.

Washington will be at a crossroads come Thursday’s trade deadline. Do they try and recoup assets and get under the luxury tax by trading away the likes of Trevor Ariza and others? That coupled with being in line with the No. 8 overall pick does not seem so bad to the alternative of *maybe* making the playoffs and likely being embarrassed in the first round. Brooks would not tip the team’s hands of whether they will be buyers or sellers by giving the company line that every NBA team is looking to improve – the key being him not specifying short or long-term. Only time will tell.