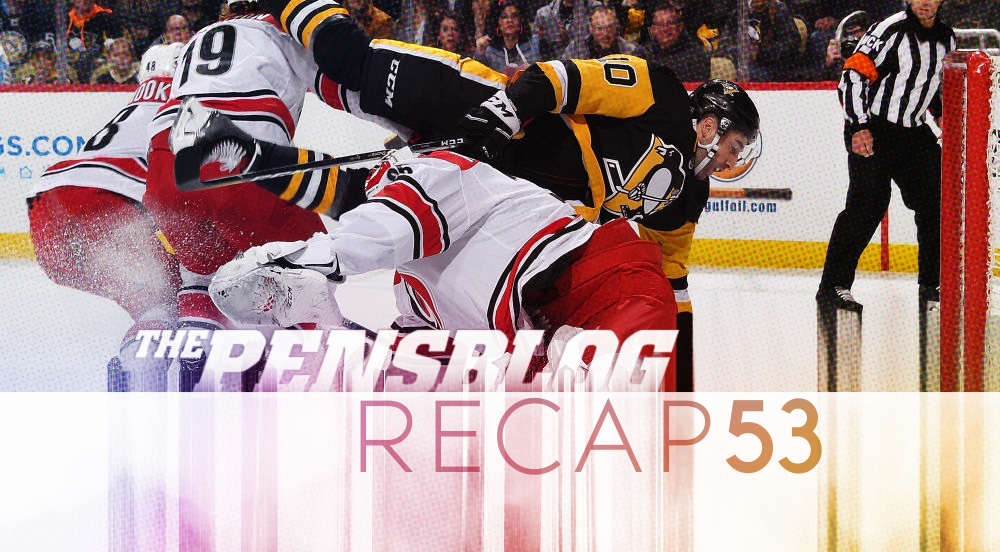 It’s hard to really pinpoint what went wrong last night for the Penguins.  They played a good, young, fast hockey team that hasn’t had many bounces go their way this year, yet is now just 3 points out of a playoff spot.

This is a Carolina team that owns the puck, hounds the puck, and has nearly all of the pieces to be dangerous, yet have been lacking in one area since a four year stretch between 2008 and 2012: goaltending.

But if they get goaltending anywhere close to what they got last night, this team is going to be a handful moving forward.

Now, Curtis McElhinney is not the answer for them moving forward, but last night was he ever stellar.  He got a little bit of help along the way to get him his 23 save shutout, but in doing so, he saw 8 of those 23 shots come from high danger areas of the ice (6 of 20 at 5v5).  The Penguins certainly weren’t without scoring chances, either, owning a 21-17 edge there and 8-5 advantage in high danger scoring chances (all at 5v5, via Natural Stat Trick).  What’s more, per Corsica, the 4-0 scoreline was a little unjust.  Carolina, on the game, took a 2.06-1.55 edge in expected goals in all situations and at 5v5, saw that at 1.8-1.24.

The difference: They scored.  The Penguins did not.  Profound, right?

Letang: "I don't think we were sustaining shift after shift. I think we had one good shift, they had one good shift and we went back and forth like that. We had good momentum, then they score a goal and it kind of deflated us at the end of the 1st." -MC

Crosby: "I think some of the chances we had throughout the game, we didn't capitalize. We had a couple go through legs, others hit posts, stuff like that. It was a tight game and you have to capitalize on your chances, and we didn't." -SK

That about sums it up.  The Pens had their chances and they didn’t take them.  The Hurricanes did.

With Malkin and ZAR still out of the lineup injured and Run The Jultz nearing a return, HCMS made exactly 0 changes to the team that broke the Sens 5-3 on Friday night and fell in Toronto 3-2 on Saturday night.

It was also 80s night, baby.  You know what that means.  It’s time for Potash to block exactly one person and call 911.

Rumor is that the Penguins have a theme night every week just to satisfy Dan Potash's contract demand appeasing his cosplaying fetish.

Unreal pace to the first period with just two whistles in the first 8.5 minutes.  Best chance of the opening half of the period came off the stick of Jared McCann, who did more on this play than Riley Sheahan did during his entire tenure with the Penguins.

Pens took over the rest of the period and were absolutely flying, forcing Carolina to turn the puck over in more critical positions than Jared Goff.

What a pass from Pettersson here to spring Wilson. Just don't see Dougie Hamilton get caught like this very often pic.twitter.com/nnfo8Y9DWw

Shortly after this nice Wilson look, Lucas Wallmark went off for hooking Rust with 4:40 left in the period to give the Peng their first PP of the game, though they couldn’t convert despite Riikola getting a chance that just wouldn’t trickle home.

Don’t really get much closer than that.

Yet, despite the Penguins doubling the Canes up at 5v5 scoring chances 8-4 and 2-0 in high danger chances and generally looking the more likely the score, it was Carolina breaking the 0-0 deadlock with about 45 seconds left to play in the period, deflating the Pens as Letang alluded to after the game.

Looking at it, too, it’s pretty innocuous.  Carolina gets into the zone, Bjugstad breaks up a centering feed and spring Pearson to hit the Canes in transition.  Phil! is in the neutral zone in support, taking the lead pass and driving straight into the heart of the Canes defense, swinging over to the right side to try to open up the pass to Bjugstad on the weak side.  Unfortunately for Phil!, he doesn’t pick his head up to see Slavin reading this the whole time and passes it right into the Canes d-man’s stick to spring Carolina the other way with Maatta caught up ice with Phil! and Bjugstad.

Here, Slavin hits Martinook to get it moving north and his little drop pass to McGinn helps push Riikola and Pearson back further than they would’ve liked, opening up the pass back to Martinook to get a shot in on Murr.

Watch McGinn after he makes the pass back, though.  He cuts across the face of Riikola so Riikola can’t make a play on Martinook, giving Martinook an option down the wall if he chose not to shoot.  Literally nothing Riikola could’ve done here to change this from happening.

But when all’s said and done, it’s a tough break for Murr here.  He gets a piece of it, despite Pearson screening him, Martinook shooting between Pearson’s legs, and the shot taking a slight deflection off of the back of Pearson’s skate.  Sometimes you just get beat on a good play.

All Canes to open the 2nd.  But when the Pens started to get their collective shit together, they got themselves a powerplay 9:26 into the period when Douglas Hamilton went off for hooking Sid.  They hit the post, McElhinney made some huge saves, but the Peng couldn’t convert.  So, naturally, the Canes did.

This time, it was a comedy of errors, starting with who else but Jack Johnson.

As the Canes enter the zone, they chip it in behind Dumo and JJ73.  Johnson does well here to get to the puck first with a little help from Dumoulin running a little pick on Aho.

But that was the last good play on this sequence.  Johnson shovels it around the boards to Simon coming down the wall.  He gets some help from Dumo to knock the puck loose for Johnson to track down.

But he….does not do that thing.  Niederreiter gets a chance on the doorstep, tracks down the rebound, sets up a few point shots after the Pens couldn’t get the puck out and just got worked down low by Justin Williams, ending with Pesce getting a shot through traffic to beat a screened Murray.

This whole damn thing could’ve been avoided, though, had Johnson not gotten beat to a puck he was literally the closest man to.

So, here’s a mathematics word problem for you:  The diameter of the faceoff circle in 30 feet.  The distance between the end boards and the goal line is 11 feet.  When the puck pops loose, Jack Johnson is about on the goal line.  When the puck pops loose, Justin Williams is at the top of the faceoff circle.  Justin Williams is also 37 years old.  Please answer the following questions, showing all of your work.

I don’t care how many hits or blocks or whatever the fuck else you want to try to use to try to justify that Jack Johnson is actually good- if you can’t win a race to a loose puck when you are literally 30 feet closer and clear that puck out of your zone, you don’t deserve to see the ice at any level.  You can miss me with the “well, Niederreiter tripped him in the slot” bullshit too, Bob.

With about 18 seconds left in the 2nd, Slavin drew a tripping penalty on Pettersson to give the Canes a carry over PP to start the 3rd.  Pens killed that off, then went back to the kill as Pearson went off for holding 3:24 into the period.  Do the math.

(The math says they killed off the penalty.)

But the math also says the Pens didn’t get a shot on goal in the 3rd until 11:08 into the period.  Can’t overturn a 2-0 deficit if you don’t shoot.

They managed to get a couple of more, got Murr out of the cage for the extra skater with just over 2 minutes to play, but it didn’t matter.

Because with a minute and a half left, after the Pens struggled to get cleanly into the Canes zone and get set up, Carolina got a chip out to the neutral zone that bounced around too for Letang to even handle, despite him knocking it away from Ferland.  Wallmark was there to put it on a platter and Trade Bait hit the empty cage from 100 feet out.

Carolina would add a 4th in the final minute because we can’t have nice things.  Johnson, on the breakout pass, put it in Garrett Wilson’s feet for the attempted redirect into the offensive zone, but TVR picked it and shipped it back up the wall, where it eluded Teddy Blueger and landed with the #2 overall pick in 2018.  Svechnikov swooped in on the 2v1 with Martinook, waited for Riikola to go down to try to take away the pass, and drove the net, beating Murray in the 1v1.

good to see these sort of people are back 👀👀👀 pic.twitter.com/NMNKjTTDG2

But watching Riikola play, you can’t help but wonder if he has more to offer.  Age is on his side, but it does take a little while to really adjust to the North American game when all you’ve known is playing in Finland.  Exhibit A:

Plays like this are why I think Riikola will be fine. He's gotta be more than what he's shown this year. Ferland has him toasted here, but he does a nice job to keep up and subtly keep his stick active to prevent Ferland from powering to the net. Really nice play all around. pic.twitter.com/0UJ8zJlDPi

well, since we're talking about that matthews contract as it relates to crosby's and malkin's….. pic.twitter.com/cLkiRW2sEL

With that in mind, it makes the upcoming 3 game road trip all the more vital.  Pens are in Sunrise tomorrow to see Derick Brassard and Riley Sheahan before hitting Tampa on Saturday and Philly on Monday.  LGP.