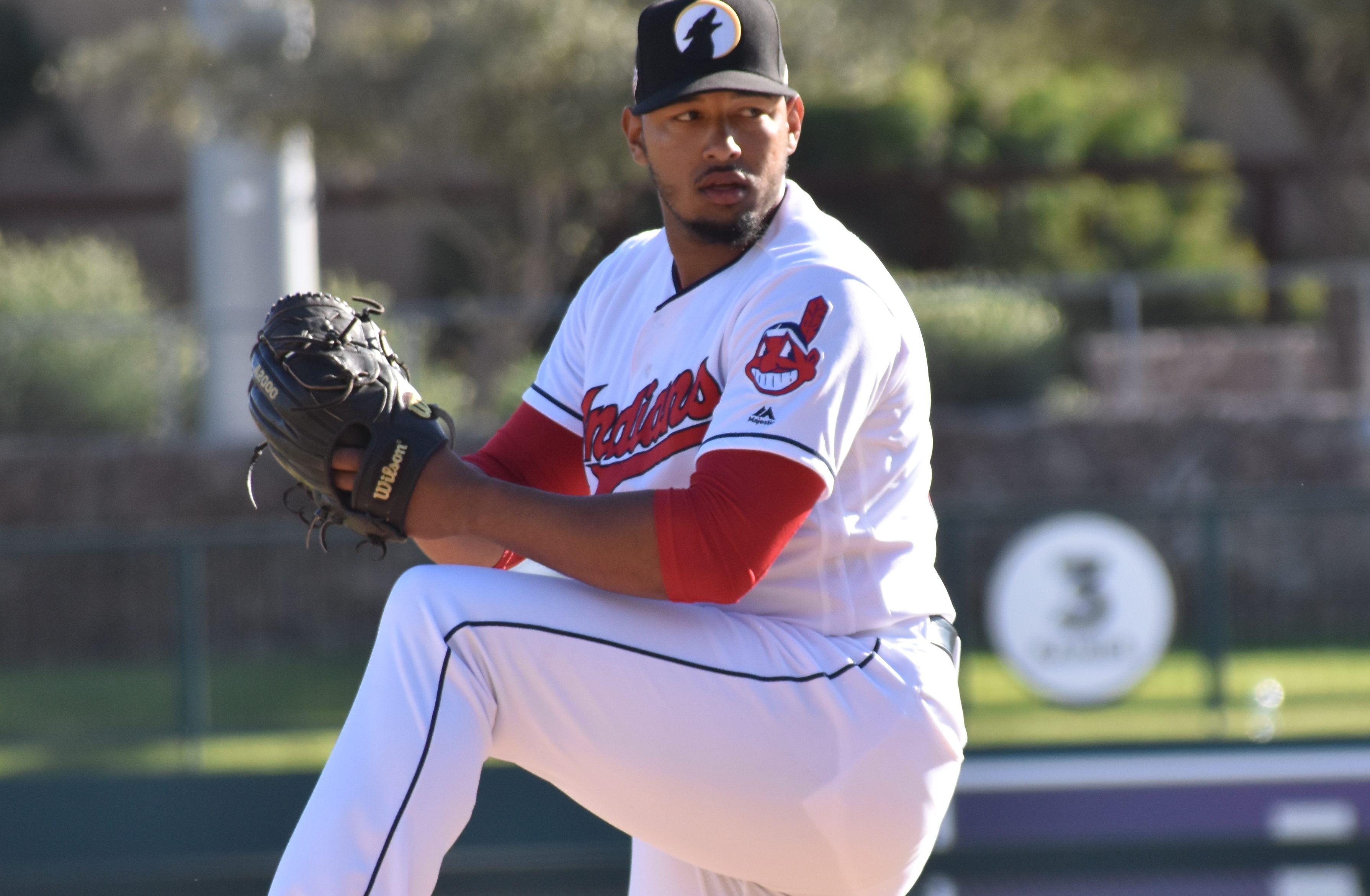 Ever since 2014 when Cody Allen took over the role, there has been little question about who the Indians closer would be during spring training. In fact, the span of time from 2014 through 2017 probably produced the most confidence any Indians starter has ever had that their lead would be safe no matter how close. That certainly changed in 2018 and ultimately lead to the Indians trading their best offensive prospect, Francisco Mejia, for Brad Hand just to survive a little longer.

While Hand is a nice stopgap, he is only guaranteed through 2020 with an option for 2021. This means the Indians should be working on grooming their next closer right now, especially with little to support Hand behind him in the bullpen. With that in mind, Dalbert Siri looks like one option that the Indians are priming for the bullpen as early as 2019 and possibly as that closer of the future.

Siri closes out a game for the 2016 AZL Indians. – Joseph Coblitz, BurningRiverBaseball

Normally, that would be the end of the season for a reliever as he threw 47.2 innings, but Siri was called upon to participate in the Arizona Fall League with the Glendale Desert Dogs. This could serve two purposes; first to get him closer to the 60 innings he would be expected to pitch in the Major Leagues (he reached 58 when you combine both regular season and AFL) and second to have him face more advanced competition. While the first goal was obviously completed, the second wasn’t as apparent.

Siri pitches in relief for the Glendale Desert Dogs during the 2018 AFL season. – Joseph Coblitz, BurningRiverBaseball

In Siri’s first game this fall he allowed three runs in an inning, putting him so far behind statistically that it made it nearly impossible for him to have a decent ERA in the short season of the AFL. In his sixth game he allowed four more runs on six hits against Surprise, ultimately leading to his 7.84 ERA. Much like many of Bryan Shaw‘s seasons in the past, however, we can’t let two bad games mar his entire season. Beyond those two poor appearances, he allowed just two runs in 8.2 innings. In his final outing, he faced just two batters and struck out both. While his strike out rate of 8.7 was considerably lower than his norm, he K’d ten over his last nine appearances (8.1 IP), something made more impressive when you consider that he had a great season in high A and took a month off before beginning the AFL.

Possibly the biggest positive to take out of Siri’s AFL experience was that he lowered his walk rate to 2.6 per nine innings compared to a previous low of 4.0 in 2016. Looking even closer, all three of his walks came against left handed hitters as he was considerably more effective against right handers.

Looking at Siri’s more significant 2018 regular season, we can see how dominant he is against hitters of the same hand. Against right handers in high A he allowed a line of just .160/.282/.245 compared to a line of .219/.346/.344 against lefties. This is not a bad line against lefties, but it does allow a great opportunity for him to break in slowly once he reaches the Major Leagues as a right handed specialist.

Siri gets ready to fire off another cutter for the 2018 Glendale Desert Dogs of the Arizona Fall League. – Joseph Coblitz, BurningRiverBaseball

While he was not invited to MLB spring training camp this year and has little chance of being involved with the Indians early on in the season, his ETA shouldn’t be too far out. Expect Siri to start the season in AA Akron with a quick move on the horizon should he dominate early. He is definitely on a short list of high end relievers along with Nick Sandlin, Adam Scott and Henry Martinez who could get the call should the MLB bullpen inevitably falter. If he can continue to limit walks, he could put himself to the front of that group as Martinez (who can reportedly hit 100 MPH) has had his own issues with control and both Sandlin and Scott were just drafted in 2018.

It was this reasoning that caused Siri to come in at #20 overall and third among relief pitchers in Burning River Baseball’s 2018 prospect rankings. As the rankings take ceiling into account as well as MLB readiness, Siri came behind Sandlin and Scott, just ahead of Kyle Nelson and James Karinchak. This was his second time being featured in the Indians top 50 prospects after falling in at #40 in 2017.

By my observations in both the Arizona League (2015 and 2016) and Arizona Fall League (2018) Siri is essentially a one pitch pitcher who focuses on his cut fastball. This may bring up bad memories of Zach McAllister, but Siri throws harder than McAllister did at this age and has more movement. He isn’t Mariano Rivera (no one is), but he isn’t McAllister either. If his command issues are resolved, there’s no reason he should be in the big leagues by the end of 2019. If that’s the case, he could quickly become Hand’s set up man, then the eventual closer following his potential departure after 2021. In any event, Siri is one reliever to keep a close eye on in AA this year when the Indians are looking to fix the problems that they didn’t this off-season.