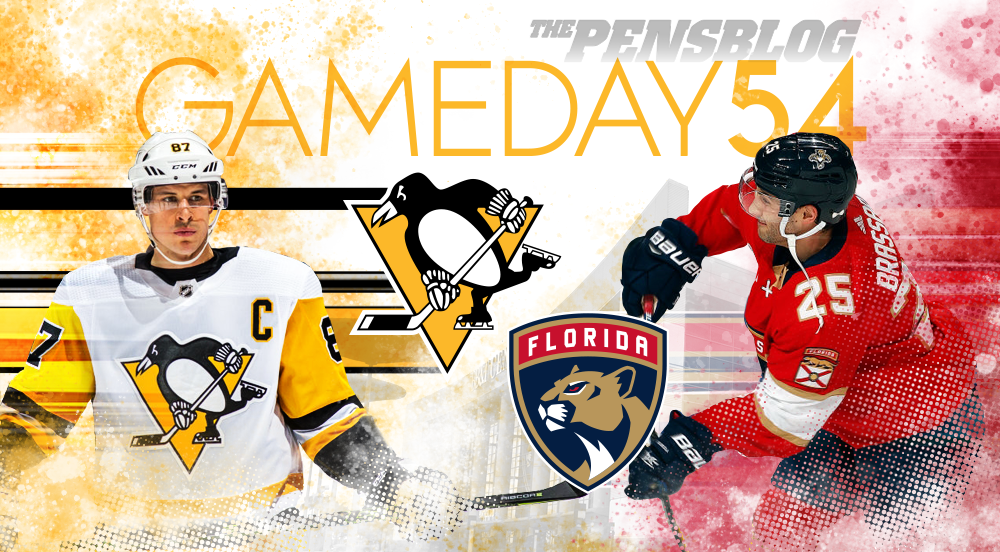 Good morning, Josh is busy doing a business in the Big Apple today so I have been assigned Gameday duties.

The Pens start a three-game road trip that begins tonight in Sunrise, Florida to take on the Panthers. The Panthers sit 11 points out of the wild card, but hopes in Sunrise are high!

“It’s a big mountain to climb, but we know we can do it. We did it last year with the same team, and we have added some pieces. Now that we’re healthy, we’re going to give it a go.” – General Manager Dale Tallon

This blog has been fairly critical both in posts and on Twitter of Jason Mackey, but on Tuesday, he did get former Penguin, now Florida Panther Derick Brassard to open up to him.

“I’m someone who likes to play with emotion. I think the last five years I proved that. In Pittsburgh, I had a hard time getting involved in games and being myself.”

Again, not a Computer Boy, but that usually means you draw more favorable matchups, thus opening up the ice to create. Sure, less ice time, but….

“But the fact that they have star power, they won, it’s the same core and everything … you’re coming in as a new guy, and it’s not an easy thing to do.”

Anyway, the Panthers dropped their last matchup on Tuesday to the St. Louis Blues 3-2. Giving up three goals in the third period, surrendering a 2-0 lead.

As we know, the Penguins got their chances, but couldn’t bury them Tuesday night against the Hurricanes.

Yesterday in practice the Pens shook up their lineup and damning Brian Dumoulin to the Jack Johnson pairing of shame.

All injured players have made the trip. It seems unlikely Schultz, Murray, Malkin and ZAR will slot in tonight, but could in Tampa or Philly, per HCMS.

Yesterday, Josh Yohe of The Athletic talked to a lot of Bjugstad’s former teammates in Florida and said that even though he’s a natural center, he had unbelievable chemistry with Barkov, scoring 19 goals and 49 points. If yesterday’s practice is any indication, playing on a line with Sid and Guentzel, the Penguins will own the puck down low with a combination of Jugs and Sid.

But really, Trocheck has grown into his own the past couple of seasons and has battled injuries this season. That said, he played 82 games in both 16-17 and 17-18 and amassed 129 points those two seasons. Offense hasn’t been an issue in Florida, and Trocheck is one of their drivers.

Don’t let tonight be the 60% of the time the Panthers work, every time.