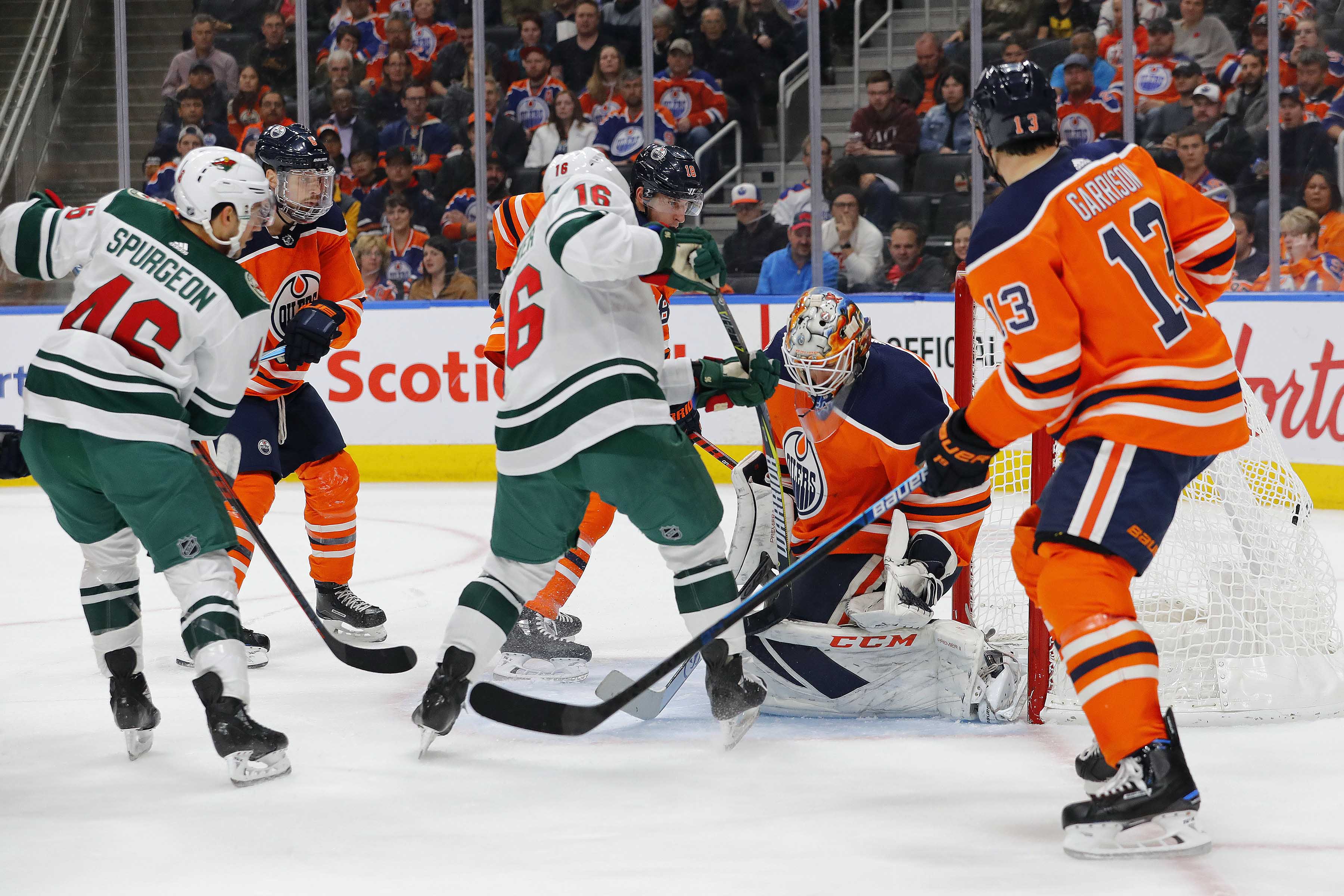 Boy, did Tuesday night ever suck. The Edmonton Oilers played a strong 40 minutes and led 2-1 thanks to a pair of powerplay goals from Leon Draisaitl. Then it happened. The Oil surrendered four goals in less than three minutes, eventually falling 6-2 in regulation time. It was, without doubt, the worst and most deflating loss of the season.

Thanks to the loss, Chicago has drawn even with the Oilers and Edmonton now sits just three points out of last place in the west. On the flip side, somehow, the Oilers are still just three points out of a playoff spot. Tonight they finish off the regular season series against a team that is also in the race with them, Minnesota. This is a huge game.

Cam Talbot gets back in for Edmonton after being pulled on Tuesday, while Devan Dubnyk will look to deal another massive blow to his former team’s playoff hopes.

Edmonton: I’m copying and pasting the same thing I wrote on Tuesday night, and will continue to do so until the Oilers play a full sixty: 60 minutes. It’s cliche and it can be seen as stupid, but the Oilers have to play a full 60 tonight. They played well for most of the game on Saturday and Sunday (and Tuesday), but they let up late and it cost them on both occasions. Play from start to finish tonight and they can get these two points.

Minnesota: Attack, attack, attack! Edmonton’s penalty kill is the worst in the NHL right now, and they are prone to lazy and bad penalties in their own zone. Attack them with pace and make them catch up. Do that, and not only will you get chances but you’ll also get powerplays. Get powerplays, and I promise you will get goals against Edmonton.

Edmonton: Leon Draisaitl is going supernova right now. He’s got a career-high 31 goals this season, and has been on fire since the All-Star break. Leon always seems to play well against the Wild, so I expect he’ll factor into the decision once again tonight. Can he score two goals for the third straight game?

Minnesota: With Mikko Koivu out for the season, someone is going to have to step up for the Wild. Joel Eriksson-Ek was recalled form Iowa yesterday and is likely to suit up tonight. Rumor has it he was Edmonton’s target with the 16th pick in 2015 prior to dealing the selection to the Islanders. Why I mention it? We all know he’s scoring a goal tonight #BecauseOilers.

Kyle Brodziak has been bad since the break, looking slow and taking some bad penalties. For the second time this season, he will be healthy scratched. After playing a number of years in Minnesota, I can’t imagine he’ll appreciate missing the only visit Edmonton makes this season.

Ty Rattie is back in after missing practice yesterday, while Colby Cave gets elevated to center the third line (yikes). Kevin Gravel is out while Brandon Manning draws back in.

Oiler fans will get their first look at Victor Rask as a member of the Wild, acquired from Carolina last month. Charlie Coyle, even with Koivu out, will remain at the wing while Eriksson-Ek draws in on the third line.

The Oilers will be making their first and only visit to Minnesota tonight, looking for their second straight season series victory over the Wild. The sides split their two meetings in Edmonton earlier this year, with the Wild winning 4-3 on October 30th before Edmonton beat up the Wild 7-2 on December 7th.

The Oilers are on their worst losing streak of the season, having dropped six in a row (0-4-2). This matches their six-game losing streak that went from December 16th to January 2nd, when the Oilers topped Arizona 3-1 on the road.

It’s gonna be cold in Minnesota for the Oilers. The Wild have beaten the Oilers 27 times in franchise history at the Xcel Energy Center, the second highest mark against any team in the league. Number 28 comes tonight as Edmonton’s losing streak hits seven.

Staal, Eriksson-Ek and Suter all score for the home team, while Draisaitl scores another on the powerplay to give Edmonton a little life late in the game. Minnesota wins 3-1.