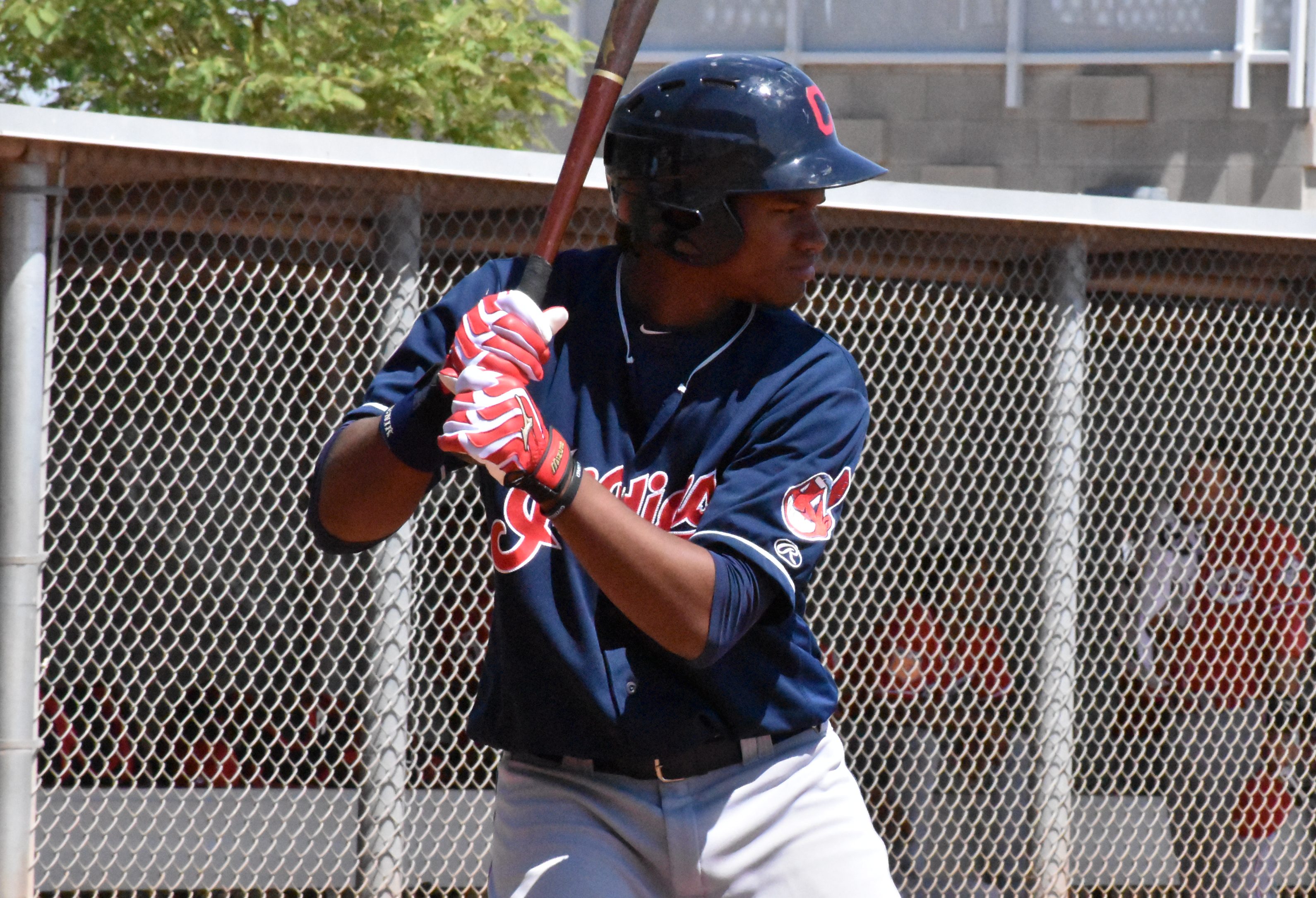 Coming in at #22 in Burning River Baseball’s 2018 Indians prospect rankings was Oscar Gonzalez, 4th among outfielders. Gonzalez just turned 21 in January and is heading into his fifth season with the Indians after spending the 2018 campaign entirely with the Lake County Captains.

For some history, Gonzalez was signed out of the Dominican Republic at the age of 16 in 2014. While he initially struggled in the Dominican Summer League in 2015, he showed off significant power for the level and impressed even further in 2016 with the Arizona League Indians. At the time, his eight home runs marked a franchise record that tied Bobby Bradley (2014), although it was tied again the following year by Henry Pujols and was bested by both Billy Wilson and Miguel Jerez in 2018.

While others were pounding the ball in Arizona, Gonzalez had a rough time in short season Mahoning Valley in 2017 as his OBP dropped to .301 (5 walks in 55 games) and his slugging percent fell from .566 with Arizona to .388 with the Scrappers. While his strike out rate actually dropped (from 36% of plate appearances to 25%), the strike outs seemed more significant due to the loss of power and patience. Despite the fall off in production, Gonzalez still had great potential and he moved up the Burning River prospect rankings from his original point of #53 in 2016 to #36 following 2017.

Gonzalez hits an opposite field home run during an AZL game in 2016. – Joseph Coblitz, BurningRiverBaseball

Gonzalez proved worthy of this confidence as he turned things around significantly in 2018, but it didn’t happen immediately. Gonzalez started out the year .214/.238/.300 through his first 34 games, making it look like his run in 2017 may be more legitimate than it originally seemed. He ended a homerless streak of 97 plate appearances on May 14th, however, and turned his season around shortly after. From the second game on May 16th through the end of the year he hit .326/.342/.494 with ten home runs and 22 doubles in 80 games. Most importantly, he lowered his strike out rate to just 18% during this span, dropping his season number to 22%, the lowest so far in his young career.

Even as his strike out rate has been trending in the right direction, his walk rate has remained stagnant. Incredibly, he walked just 12 times in 2018 compared to 13 home runs and over his US MiLB career he now has 26 total walks with 24 home runs across three seasons (210 games).

While he was in Arizona, Gonzalez had a gigantic hole in his “strike zone” as he would swing at anything on the outside of the plate, even if it was far beyond his reach. Luckily for him, pitchers in the Arizona League have little control and were unable to take advantage. I speculate that this lead to his problems in Mahoning Valley as he faced more college age pitchers instead of high schoolers. His struggles in the first half of 2018 seem to confirm this, although the oddity is that as he improved his all around production over the last 80 games in Lake County, he didn’t take more walks. It’s possible that he adjusted his swing to foul off more pitches while waiting for the one he could really launch.

The way Gonzalez launches baseballs is really what sets him apart and, while exit velocity is not generally available for the minor leagues, personal observation would put him among the hardest hitting Indians prospects along with Will Benson, Bo Naylor and Bobby Bradley.

Because of this, Gonzalez is sure to garner many comparisons to his contemporary Benson. Both were born in 1998, are outfielders with significant power and play at the same level. However, there are significant differences in strengths. Benson is a great defender with a plus arm, an established base runner and isn’t afraid to draw a walk. In fact, he walks so much that it makes it easy to ignore his sub-.200 batting average. Gonzalez is essentially the opposite in all three factors.

Starting with the average, Gonzalez has hit for such a high average that if you just look at his OBP, you can ignore his low walk rate, but you shouldn’t. While a high exit velocity can lead to a higher than average BABIP, he has had ridiculous BABIPs (.440 in 2016, .366 in 2017, .353 in 2018) in each of the last three seasons for someone who is so slow of foot. It is bothersome to think of how much his average has been propelled by luck and how low his OBP will drop if his BABIP ever gets near the league average of .300. For example, when Benson had a BABIP of .339 in 2017, he hit .238, but when that dropped to .218 in 2018 he hit just .180. This is one of the major reasons we no longer consider batting average a serious statistic and certainly not a predictive one. Gonzalez’s numbers looked better in 2018, but ultimately Benson will be better off with his superior walk rate.

Continuing on with Gonzalez’s speed: he has none. For some reason, he attempted to steal 11 bases in 2018, but was caught six times. This fits with all the times I personally have watched him play and would not be surprised if his eventual position was 1B/DH. He is both a poor base runner and nonathletic in the outfield. Furthermore, he has had concentration issues in the field and should be considered a liability. In 2018 alone he committed 12 errors in 104 games, although almost all of those were in his short time in right rather than his primary position of left. If the Indians decide to keep him in the outfield, it will have to be exclusively in left where he’ll have less ground to cover and won’t be hurt as much by his average arm strength.

This particular group of skills/lack thereof makes Gonzalez a very interesting player. As it stands, he should not be considered MLB talent, but he has so much power in his bat it is impossible to ignore. He is still young enough to improve significantly, particularly in his pitch selection. In the end, he can get by not being able to play defense or run as long as he becomes more conservative on the bases. What he won’t be able to do is get by swinging at every pitch.

The 2019 season could be a make or break season for Gonzalez as he will get tested in high A for the first time. If he can repeat his numbers from 2018, he will certainly stick around, but if he improves his walk rate he could move his name up the board as far as outfielders the Indians consider MLB ready. Considering their current situation in the outfield, the Indians would jump at the chance to have a hitter of Gonzalez’s power up as soon as possible. Until we see how he fares against more advanced pitchers, however, he will remain in limbo between future MLB star and MiLB flame out.