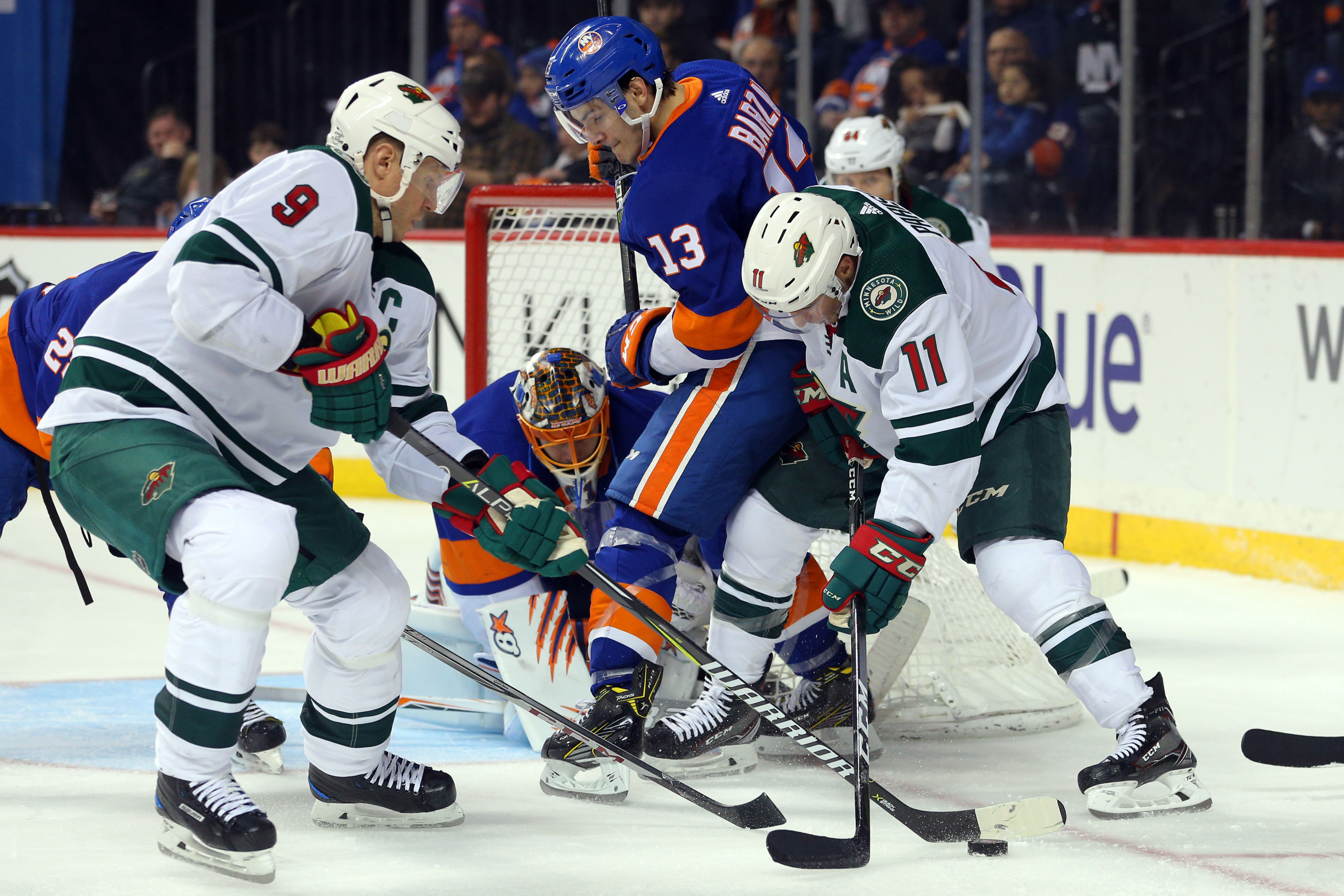 I understand what it feels like to be mired in misery.  As I’ve talked about in the past, I coach high school football and I’ve been through good seasons but I’ve experienced my share of dismal ones too.  Seasons where we won once and it made practices a grind, especially the days after you had no chance of making the playoffs.  The Minnesota Wild are not in that position yet, but it certainly looked to be headed in that direction heading into Saturday’s game against the New Jersey Devils.  They could’ve crumbled after the Devils took an early lead on a soft-ish goal, but to their credit they rallied back and won the game.

But that was against the last place Devils, now the Wild are facing the 1st place New York Islanders.  The Islanders blow you away with a super potent offense as they work very hard and are much-improved defensively.  The Wild have had a tough time scoring goals as of late, but they did well with a simple approach on Saturday.  Can they do it again to get a victory over the Islanders?

1st Period Thoughts:  The Isles forced a turnover in the neutral zone in the opening seconds and went on the attack and send a shot on goal that Devan Dubnyk knocked down as New York crashed the net.  With the puck sitting a few feet from the blue paint, Joel Eriksson Ek would sweep up the biscuit and then race down the ice for a 2-on-1 as he worked his way through a check to get a backhand chance that was stopped by Thomas Greiss.  The Islanders would then work the cycle with their 3rd line as Valtteri Filppula and Anthony Beauvillier hemmed the Wild in their own zone on the cycle so long that New York was able to change lines and stay on the attack.  New York’s ability to generate speed through the neutral zone was impressive and Minnesota seemed to struggle to keep up and Dubnyk was forced to make a nice stop on Devon Toews from point-blank range.  While the Islanders’ cycle was well executed, the Wild were able to keep New York to the perimeter.  Jared Spurgeon would earn an interference penalty that put the Islanders on the power play.  The Islanders would funnel a shot on goal that Dubnyk stopped and they crashed the net and Jordan Eberle nearly cashed in from in close.  After that initial chance, the Wild did a good job of locking things down with some timely physicality by Ryan Suter and some good puck support from Eriksson Ek who continues to exhibit a lot of versatility.  The Wild got the kill despite a flurry of shots late in the power play that Dubnyk steered wide of the goal.  But Dubnyk couldn’t do it all on his own; as another neutral zone turnover quickly was transitioned to a breakaway chance for Beauvillier who skated in and snuck a shut through the Wild goalie.  1-0 Islanders.  Greg Pateryn and Charlie Coyle seemed to be stationary and lacked the energy to chase down Beauvillier which is a bit troubling to say the least.  A high sticking call on Marcus Foligno put the Islanders on the man advantage with a great opportunity to extend their lead.  Minnesota’s penalty killers were rather static as the Islanders moved the puck quick around the offensive zone, but Dubnyk would bail his team out with some fine stops to give his team another big kill and keep his team within one.  The Wild tried to counter by working pucks deep and looking for a chance out front but the Islanders were patient and a small poke check from Matt Pulock allowed New York to counter attack and they nearly cashed in off the rush as Dubnyk sprawled to deny Filppula.  Eriksson Ek would draw a boarding penalty on Scott Mayfield in the closing seconds of the period that will give Minnesota a power play to start the 2nd.  Minnesota is fortunate to only be trailing by one with how much they’ve been dominated in terms of effort by the Islanders so far.

2nd Period Thoughts:  Minnesota took advantage of their power play to start the period as a successful puck battle along the boards by Eric Staal allowed Suter to send a shot on goal that drew a rebound off Greiss that was gathered up by Jason Zucker who then fed a cross-ice pass to Mikael Granlund who wired it home.  1-1 game.  The Islanders would go back on the attack and their pressure would draw a penalty as Anthony Bitetto was called for holding.  The Islanders’ power play again moved the puck quickly which never allowed Minnesota’s penalty killers to apply much puck pressure and Toews pulled the trigger that rang off he post and in.  2-1 Islanders.  The Islanders poured on the pressure and bad passing led to easy turnovers and New York continued to cause Minnesota fits as Dubnyk had to make a huge save on Matt Barzal‘s one-timer.  The Islanders and Wild would take quick penalties to make it 4-on-4 for about 1:56.  The Wild would try to slow things down a bit and be smarter with the puck.  A turnover near the Wild blueline by the Islanders nearly yielded a golden opportunity as Zucker tried to find Staal with a pass for a breakaway but it was just out of his reach and Toews was able to track it down.  The Wild were struggling to to create much in the way of time and space in the offensive zone and had to settle for shots from the perimeter that were of little threat to Greiss and the Islanders.  Pateryn who seemed to be struggling with the Islanders’ speed most of the game would be exposed once again as Beauvillier would skate by the Wild defenseman compelling him to haul him down for a penalty.  Fortunately for the sluggish Wild defender, his teammates on the penalty kill did a nice job reading the play and Minnesota would escape undamaged.  Minnesota would try to counter with some offensive pressure of its own as Jordan Greenway spun and let go of a backhander that hit the post and went out.  The Wild were trying to use the Eriksson Ek line more and more later in the period but time and space were still a rare commodity in the Islanders’ end of the ice.  Just 6 shots on goal for the Wild, Minnesota needs to find a way to generate more scoring chances if it wants to have a chance to win this game or at least come away with a point in the standings.

3rd Period Thoughts:  The 3rd period would start with the Wild racing into the Islanders’ zone as Zucker fed Staal for a close range chance that was stopped by Greiss.  Moments after that Zucker would level Casey Cizikas that drew the ire of the Islanders who rightly felt the hit was a bit dirty.  Minnesota started to pour it on as Staal had a wrap around that forced Greiss to sprawl to make the stop with Greenway crashing the net.  The line continued to apply pressure as Zucker set up Greenway with a laser of a shot that drew a stop by Greiss.  The Wild’s pressure was starting to frustrate the Islanders as Barzal punched Eriksson Ek because he kept on battling for a puck giving Minnesota a power play.  The Wild were showing some desperation as they were hustling to win the small races for loose pucks and sending more shots on goal.  Yet in the critical moments they seemed to lack that extra player near the crease so many potential scoring chances never really materialized.  Jonas Brodin would high stick Nick Leddy giving the Islanders’ a late power play.  The Islanders didn’t do much with the power play, as they were content to kill time.  This left the Wild with less than two minutes to pull Dubnyk for an extra attacker and Minnesota was only able to generate one flurry out front but Greiss was able to keep it out and we’d come up short 2-1.

After Iowa defeated the Rampage for the first time this season, albeit in overtime you knew San Antonio was going to want to avenge that loss sooner rather than later.  It was no surprise San Antonio started the game with a lot of jump and vigor but penalties helped kill some of the Rampage’s snarl and the Wild went to work attacking Jared Coreau.  Yet it was San Antonio striking first as Samuel Blais scored on Kaapo Kahkonen late in the 1st.  1-0 Rampage going into the 2nd period.  Iowa would even the game just inside the 8-minute mark when leading goal scorer Gerald Mayhew notched his 17th of the season on a nice pass from J.T. Brown.  San Antonio would answer back a few minutes later as Klim Kostin buried his 6th goal of the season to give San Antonio a 2-1 edge going into the 3rd.  Iowa poured it on in the 3rd and it appeared as though the Rampage were going to have their revenge but the Wild would get the equalizer with just 9 seconds left in regulation as Brown scored sending the game to overtime.  In overtime, Iowa would not need much time as Carson Soucy wired a one-timer by Coreau after a nice set up by Mason Shaw to give them the victory.  Kahkonen finished the game with 20 saves.  The win puts Iowa just a victory behind 1st place Grand Rapids and 3 points ahead of 3rd place Chicago in the AHL Central standings.