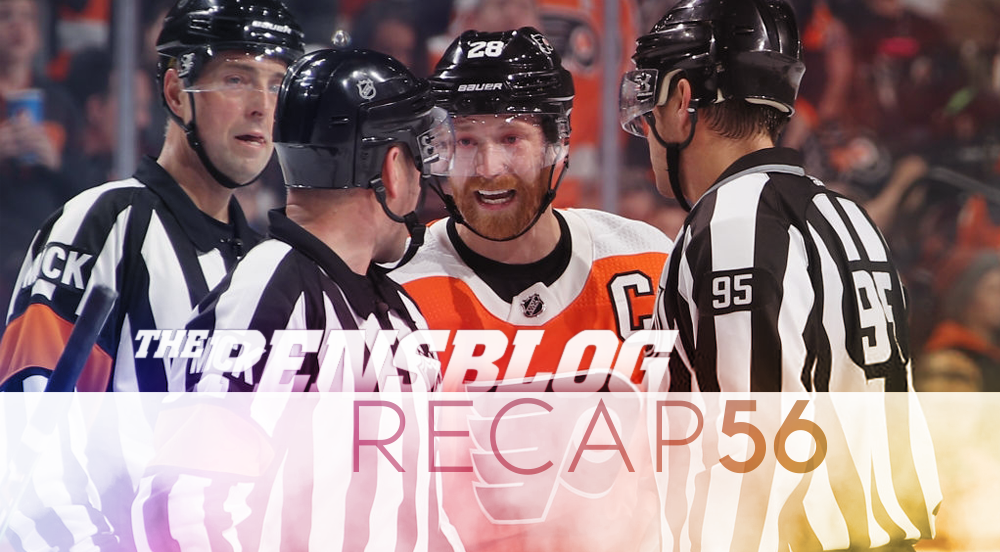 What a morning it was. You woke up, grabbed your coffee and opened Twitter to a hellscape that brought back 90s flashbacks.

Sullivan is a bad coach, Cullen sucks, the Penguins were lucky to win the Cup and so much more.

Why do people care about what position the pens are in the standings constantly? Like it matters if they're in 5th, 2nd, or 8th. They could be 32nd in the league but they're 7 points out of first in the division. And they havent won the division in 5 years but have 2 cups since

Geno back. Murr in the cage.

The first line came out and got a chance right off the bat. Jake-N-Bake from the slot, but Hart made the save.

Just 1:27 into the period the worst rule in hockey reared its ugly head as Bjugstad put the puck over the glass and we went to an early PK. Your butthole tightened up because it always feels like a Flyers power play ends in a goal, but these aren’t your mom’s Flyers. Barely any looks and it was easy work.

Throughout the first half of the opening frame, I am proud to report that Matthew Murray, winner of two Stanley Cups before age 24, was indeed back on his bullshit.

Then, Rust-Crosby-Guentzel went to work.

87 dominating down low as he’s so apt to do, won a puck battle, pushed the puck down low where Rust would quickly reverse it. No one other than Bryan Rust and Sidney Crosby knew what happened. So much so that rookie “sensation” Carter Hart wasn’t even looking at Sid. Crosby with the entire left side of the net and an eternity.

Not long after 87’s tally, using his baton, Giroux would trip up a Penguin and the new look power play took the ice and….well they took the ice. We’ll leave it there.

As stated previously in this section, the two-time Stanley Cup-winning goaltender for Pittsburgh remained on his bullshit.

Maatta went to the locker room with about five minutes to go after Madam Zeroni or whatever that joke in orange’s name was tossed him into the boards with no puck in sight, because hockey.

Not much else would occur other than the prospector from Rudolph pretending like he was trying to avoid Murray while crashing the net.

Flyers would control the CF% 55-44 and hold a 3-1 edge in high-danger chances, but the Pens had the lead where it mattered.

The second period opened with a couple exchanged chances back-and-forth. Then Jack Johnson kneed Lindblom in the head. Dunno what to make of it. Weird play.

Then again (AGAIN!!) the worst goddamn rule in hockey came back as Hornqvist flipped the puck into the stands. No matter, the Penguins penalty kill stood up again. A combination of blocked shots and Matt goddamn Murray.

Immediately following the penalty, Geno Malkin with a clean zone entry would drop the puck to Bjugstad and drive the net. Taking the defenseman with him, Geno would set a rolling screen and Jugs made no mistake beating the rookie goaltender.

The Penguins would start to take over for a bit, but with 9:05 remaining Jake-N-Bake would get Nolan Patrick (shit name, by the way) with a can-opener and it was off to the box again.

Did that worry you? It shouldn’t have. Matt Murray, haver of the same amount of Stanley Cups as the entire Flyers franchise, had this shit on lock.

The whistle blew. Deal with it.

Murray with an unrealistic 28 saves in the second period. Flyers had the territorial advantage, but nothing to show for it. 62-37 advantage for Philly and another 3 high-danger, but through great goaltending and taking advantage of their opportunities, Pens had the lead.

Picking up right where we left off, the Flyers got two quick shots right off the hop, but Murr was again up to the task.

Despite the Flyers owning the second, the Penguins started to take over the in the third. They smelled blood and started to pounce. The Flyers punched themselves out in the second and the Pens took advantage.

Noticeable in the final frame was the Flyers forecheck seemed to…relent late? The Pens also did a good job keeping the Flyers to the outside for the most part and when there was a chance for a second chance it was cleared or they were forced to shoot from the point. When Murr sees a point shot, he’s stopping it.

Raffl, even though punching in the back in the head of the head is bad, swinging your stick Ned Stark style is a match penalty every time, Geno. Bad.

Five minute major and a match.

Flyers pulled Fart with 2:50 to go, but no dice. Sid almost blew it. Oh well.

Kris Letang broke the goals by a Pens defenseman on the empty net.