Wild Squander Early Lead in 5-4 Loss to the Flyers 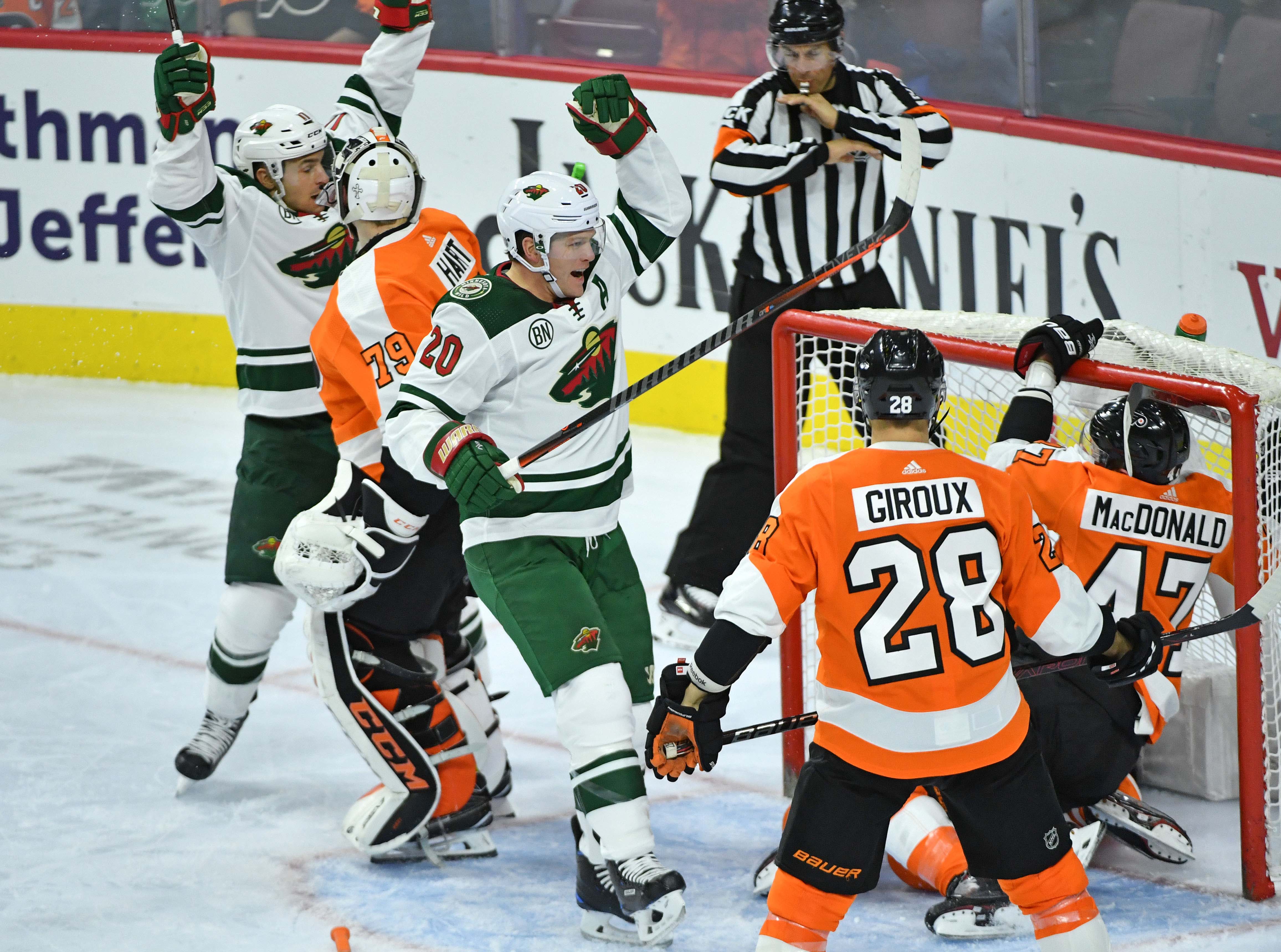 Wild Squander Early Lead in 5-4 Loss to the Flyers

“At some point we’ve got off the win one, lose one wagon. … We have to put a run together. St. Louis has started. Chicago has started. L.A.’s started. All these teams have put runs together. Like, I mean, we have to do it, or we will be golfing early,” said Wild Head Coach Bruce Boudreau after Minnesota’s 2-1 loss to the New York Islanders on Sunday.  He also went onto say his team only came to play a period and a half of hockey which to many sounded like a bit of an indictment of his team as knew their place in the Western Conference standings was in peril.  Coincidentally the Wild did lose a position in the standings because of the loss.

The Wild were embarrassed by the hapless Flyers a few weeks ago.  Minnesota knows it must take full advantage of opportunities to gain points.  The Flyers are likely looking at being a seller at the deadline but are still hoping to improve and develop its young players.  Can the Wild earn a victory on home ice against the Flyers?

1st Period Thoughts:  Right from the drop of the puck, the Flyers went right to work sending the puck deep into the Wild end and then centering a pass and Claude Giroux was stopped at close range by Devan Dubnyk.  Minnesota didn’t seem to have a lot of jump or speed to start the game.  The only players on the Wild that seemed to be ready to go was Joel Eriksson Ek and Luke Kunin who came close to lighting the lamp as Anthony Stolarz denied Kunin’s bid.  The Flyers would come back down the ice and a point shot by Ivan Provorov would skitter off the ice and deflect off Justin Bailey‘s leg and by Dubnyk.  1-0 Flyers to a collective groan from a home crowd used to disappointment this season.  Minnesota didn’t appear to have much push back initially.  Eventually the Wild started to move its feet a bit more and while they sent pucks through the crease that never really tested Stolarz.  Philadelphia would give the Wild a power play as two penalties in quick succession on Shane Gostisbehere and Radko Gudas respectively would give give the Wild a long 5-on-3 situation.  Minnesota’s power play was terribly static as they set up Jared Spurgeon for a point shot that Stolarz absorbed.  The Flyers’ penalty killers were staying in a fairly tight diamond to keep Minnesota to the perimeter.  A quick pass by Mikael Granlund would reach Zach Parise who managed to sneak a shot just inside the post and by Stolarz to tie the game, 1-1.  The goal finally gave Minnesota a little spark to its game and a few shifts later they came dangerously close to taking the lead as Marcus Foligno almost scored on a no-look backhander that Stolarz just managed to block aside.  Minnesota was skating with more purpose and the Wild’s pressure on the puck by Victor Rask drew a bad pass by Gostisbehere to the middle of the ice right to Kunin who fired it by Stolarz.  2-1 Wild.  The youngsters would again swarm around the Flyers goal, pressuring Philadelphia in its own zone and Eriksson Ek tried to swing a shot on goal but fanned on it and the puck went right to Kunin who buried it.  3-1 Wild.  The Flyers’ fatigue was resulting in some lazy penalties as Scott Laughton was caught slashing.  On the power play the Wild tried to sneak in a little closer and look to beat Stolarz but he’d hold on to Spurgeon’s bid.  The Wild would come up empty on the man advantage.  The Flyers would get victimized by a terrible double-minor call as Jordan Greenway tried to step around Robert Hagg and Greenway’s stick bounced off Hagg and hit Jason Zucker in the face that appeared to break the speedy winger’s nose.  Remarkably Hagg would get a double minor which drew the ire (understandably) from the Flyers’ bench.  In my opinion there is a pretty clear case where an official should be able to correct their call as Hagg did not deserve a double minor at all.  Good thing for the Flyers, the Wild didn’t do anything to take advantage of their extended power play as bad passes and a general lack of focus caused them to squander most of it.  It would be interesting to see if the home crowd would’ve serenaded this club with boo’s for its lack of focus the last two and half minutes of the period with the power play.

2nd Period Thoughts:  The Wild had almost 2 minutes of power play time to start the game and slow puck movement made it fairly easy for the Flyers to keep Minnesota at bey as all they could set up is a few shots from the perimeter that Stolarz easily handled.  The penalty would be killed off but Minnesota still applied pressure and Eric Staal set up Jordan Greenway for what looked like a tap in goal only to be thwarted by the blocker of Stolarz.  The Wild would give the Flyers a power play as Eric Fehr tripped up Laughton.  Minnesota’s penalty killers were not giving the Flyers’ power play much in the way of time and space.  But the Wild penalty kill stopped moving its feet and Gostisbehere’s point shot was redirected by Wayne Simmonds and then James van Reimsdyk and by Dubnyk.  3-2 Wild as they managed to give up another power play goal.  Minnesota would take another penalty shortly thereafter as Parise would go to the box for slashing.  The Flyers’ would work the umbrella and Minnesota had to come up with a few big shot blocks and good puck pressure helped thwart the rest of the Philadelphia power play.  The Wild seemed to ease up a bit and the Flyers would catch the Wild sleeping as Anthony Bitetto was walked by Travis Sanheim and he’d swing a pass across the crease where Sean Couturier tipped it in.  3-3 game to the anxious groan from the home crowd.  The Wild would get a power play when Nolan Patrick was tagged with a high sticking minor.  Yet the Wild struggled to demonstrate as much focus on the man advantage and passed up shots nearly resulted in disaster as Provorov would counter attack and he’d fire a shot that Dubnyk struggled with before he covered it up.  A classic example, Charlie Coyle gets the puck with some room and instead of taking the puck to the net he instead takes it behind the net and tries to thread high risk, low-reward pass that ends in not shot being sent on goal.  The momentum seemed to be in the Flyers’ favor as the period ended with an anxious crowd looking on in St. Paul.  Not a good period at all, just way too nonchalant.

3rd Period Thoughts: The start of the 3rd felt a bit sloppy, and the period’s first goal would be sloppy as well. From the far boards just above goal line, Spurgeon would take a shot. While Spurgeon would raise his hands in celebration, the officials would waive it off and play would continue. Dubnyk made a save of his own which then deflected into the netting. This stoppage would allow for a goal review. Upon further review, the puck would laser behind Stolarz’s back and angle down and go under the frame as Stolarz was starting to lift the net. Ultimately, the goal would count and more time would be put on the clock.  The Wild seemed keep up pressure by continuing to send shots on goal, but they’d ease up at the worst time and the team would get burned a few minutes later.  A terrible line change gave the Flyers a ton of ice to work and Giroux would skate in and wire a shot top shelf to tie the game at 4-4.  Minnesota would try to push for the go-ahead goal and a few attempts at setting up a goal mouth chance would fail to connect.  The Flyers would start to work pucks down low and send any pucks they could on Dubnyk who seemed to be fighting the puck with each save.  Both teams were wary of making a mistake in their own end and were playing it safe with least a ‘mercy’ point on the line.  The Flyers appeared to have a bit more jump and confidence as the Wild looked tense and nervous and Seeler would trip up Laughton for a penalty.  This would put Minnesota’s shaky penalty kill unit out on the ice against the Flyers’ hungry power play which had already struck once this game.  Sure enough, the Flyers worked the puck out to the point where Gostisbehere would blast a shot that drew a rebound and van Reimsdyk was able to sweep the rebound off the Wild goalie and in.  5-4 Flyers.  Minnesota would put up a token effort to try to tie the game but you got the sense it was just for show as Ryan Suter skated into the slot and fired a shot up over the goal.  The Wild would pull Dubnyk for an extra attacker with about 2 minutes left.  The Wild didn’t do much with the extra attacker and Suter would hold up Simmonds to keep him from winning a race for a loose puck and he’d go to the box.  The Wild would call a timeout to let old legs rest and talk about what they need to do while shorthanded to try to tie this game.  Lots of fans started to leave early to go drive home during the stoppage in play.  The Flyers were content to just keep the puck to the perimeter and in front of their defense.  Minnesota would pull Dubnyk again making it 5-on-5 but the Wild got a little good fortune as Couturier missed on an open net.  And that is as close as it got as Minnesota fell 5-4 to the Flyers under a chorus of boo’s from the home crowd.

LW – Kirill Kaprizov (CSKA Moscow, KHL) ~ the Wild’s lone blue chip prospect seems to be hitting the after burner on his season as he had a hat trick and a helper on 6 shots in CSKA Moscow’s 4-1 win over Slovan Bratislava on Monday.  Kaprizov has 27 goals, 43 points, 12 PIM’s and is a +30 in 52 games.

D – Filip Johansson (Sweden, Five Nations Tournament) ~ the Wild’s 1st round pick from 2018 had a goal in Sweden’s 6-2 win over Switzerland.