RECAP 57: The best player in the world extends his record to 6-0 versus Connor McDavid as the Pens drops the Oilers, 3-1 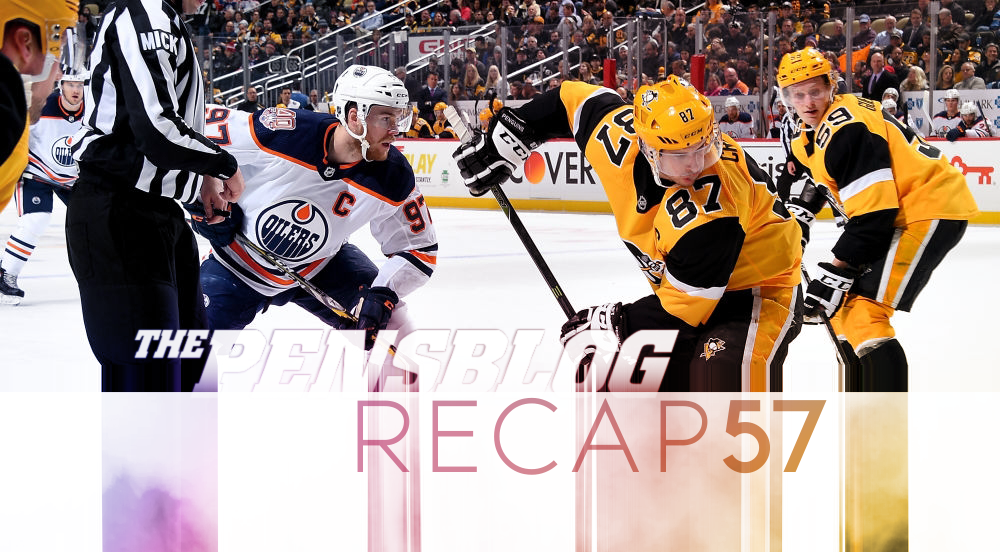 RECAP 57: The best player in the world extends his record to 6-0 versus Connor McDavid as the Pens drops the Oilers, 3-1

Ahhhhh, another edition of Wednesday Night Hockey! You know what that means – Sidney Crosby and the Pittsburgh Penguins versus some irrelevant hockey team buried at the bottom of the standings that might’ve been relevant 2-3 years ago. For this week’s installment of puck night, NBC Sports features the Penguins (of course) versus Connor McJesus and his merry band of losers.

How are the Oilers this year, you ask?

There they are! Shitty, again.

*the word “again” is repeated with an echo*

After 13 games out of the lineup, @zreese11 is back! pic.twitter.com/BJ32G4nEhb

With Malkin serving his one-game suspension for attempting to sword fight Michael Raffl in the face with his hockey stock this past Monday, the Pens had no choice but to shuffle up the 2nd and 3rd lines for this one. Jugs moves up to the 2nd line to center Pearson and Phil, while Hornqvist and Blueger move up to the 3rd line to join McCann. As for the 4th line, ZAR returns back to the lineup sending Dominik Simon up into Jack Johnson’s soon to be sanctuary (i.e. the press box, lol just a joke lol).

As for the D, Maatta’s shoulder injury reinserts Chad Ruhwedel back into the fold while *looks up to the sky and thanks god* Letang and Dumoulin get paired together again.

And, of course, Murr in the cage.

You know the drill.

*A white dad at a restaurant who just paid his bill*

Dad:
"You guys ready to rock and roll?"

As we’ve all become accustomed to witnessing in terms of the 2018-2019 installment of the Pittsburgh Penguins men’s professional ice hockey team, you knew right off the bat of this one that the team in puke yellow was going to play down its competition. And lo and behold, they did!

Less than five minutes into the first 20 minutes of the ball game, Pearson turned the puck over in the Oilers’ zone leading to a McDavid/Draisaitl 2-on-1 the other way and into the back of the net.

No ands, ifs, or buts about it, Bjugstad’s gotta get back on this one to prevent the 2-on-1 opportunity or those two are gonna bury that every single time.

As for the rest of the period, the Pens had their chances on a few 3-on-2 opportunities, but this news that broke out about the Pittsburgh Post-Gazette was infinity times more exciting:

The publisher of the Pittsburgh-Post Gazette drunkenly stumbled through the newsroom, yelling at journalists and firing them while demanding a photo of him & his daughter be put on the front page (while the daughter screamed "Please, please Daddy no!")https://t.co/J2FLc3jXRJ

you're a gentille, start acting like one! haha, another fun day at the paper

Also, we were greeted by this guy who nearly came in his pants when interviewed about watching Connor McDavid play in person for the first time since McDavid’s OHL days in Erie.

this guy is way too excited to watch Connor McDavid play in person pic.twitter.com/wedyo7TS3U

As boring as the first period was in this one, the hockey god’s greeted us with quite the eventful 2nd. Most notably, the best player in the world decided to wake up the rest of his team while Connor McDavid and the Oilers spent the majority of the period playing in their in own zone.

But before any of the action started, Tanner Pearson took matters into his own hand (literally) and headed to the box for being a dumb idiot who doesn’t know the rules of hockey.

35 seconds later, the Pens’ PK unit would dominate the absolute fuck out of the Oilers top PP unit and put the Pens on the board with a shorty.

Just an absolute clinic by Matt Cullen and Bryan Rust. Show to this your kids.

Less than four minutes later, future Norris Trophy recipient, Kris Letang, would add another clip to his never-ending highlight reel 2018-2019 campaign with this ridiculous heads up pass off the body of Oilers goalie Mikko Koskinen’s body and directly to the tape of Teddy Blueger crashing to the net.

Not pictured here was a ridiculous between the legs pass from Sid to start the sequence in the offensive zone. And that’s the thing about Sid – so much of what makes him an absolute superstar (and still the best player in the world) are the subtle, elite plays he makes that go largely unnoticed because they’ve become all too routine at this point in his career.

The Oilers and Penguins would each get another opportunity on the PP with the Penguins creating more high danger scoring chances; however, all eyeballs were on 97 late in the 2nd as Kris Letang interfered with McJesus on a breakaway opportunity.

Gotta give credit where credit is due – for once the refs became aware of the moment and decided to give McDavid a penalty shot. Sure, the call should’ve been a penalty shot 10 times out 10, but this is the NHL we’re talkin’. If this was Milan Lucic on the breakaway, you can bet your ass it would’ve been a 2-minute minor on Letang.

As for the actual penalty shot itself, 2-time Stanley Cup champion, Matthew Murray, came up HUGE with the *clears throat* glove save.

Go drink a full bucket of paint if you don’t think this guy’s all the way back into championship form. 30 is absolutely LOCKED in right now and it’s incredibly fun to watch.

Oh, and this also happened.

Unlike the first installment of Pittsburgh vs. Edmonton in October where Sid put on a clinic in OT, this one left us yearning for more. Jake Guentzel would make the second best save of the game by preventing McDavid from tying the score at two early in the 3rd.

But just like they say, beggars can’t be choosers, and by golly, nobody in Pittsburgh gives a shit about bonus hockey tonight because that means the Penguins would come out on top in this one.

Also, just an absolute elite tweet courtesy of our friends over at Pensburgh: