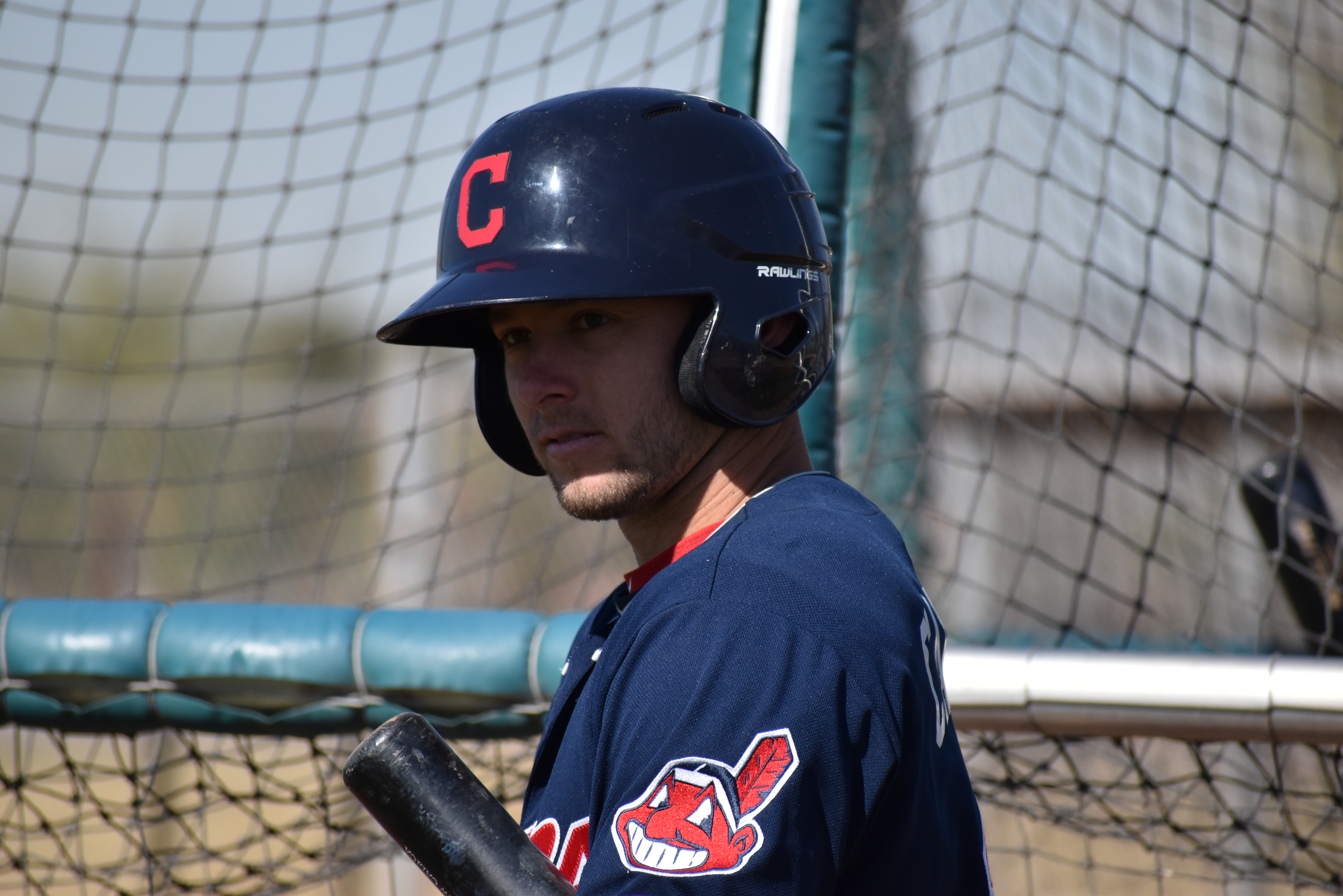 During spring training in 2019 Connor Marabell, Oscar Mercado and Mike Papi will be heading to Major League camp leaving a significant hole in the pre-season Columbus Clippers line-up. While between one and all three will likely return to AAA before the season starts, this gives a great opportunity for a new name to sneak into the Indians AAA line-up: Andrew Calica.

In a way, it seems like Calica is still brand new to the system, having been signed in 2016, but in another way his name has been around forever as he was originally drafted by Cleveland in 2012. As an older player when he finally did sign, Calica skipped the Arizona League and played just 40 games with Mahoning Valley and 10 with Lake County before hitting high A. While this was an extremely quick promotion, Calica was incredibly impressive in Lynchburg with a .274/.368/.396 line in 2017 with 22 doubles and 14 steals.

Making quick work of the Carolina League, Calica was promoted to Akron for the entirety of the 2018 season, where he did things like this:

He also improved his OBP to .389 thanks to 55 walks in 115 games and his stolen base production to 27 times safe in 32 attempts. Much like Marabell one level ahead, Calica has never been considered a top prospect, but has consistently contributed at every level without a significant step back so far. It was this consistency and his nearness to the Major Leagues that had BurningRiverBaseball rank him as the Indians 17th best overall prospect last fall and second best outfielder after George Valera.

On the plus side of Calica’s ledger are his great speed, glove, bat control and knowledge of the strike zone. There is very little on the negative side (nothing to the extreme), but if one was to nitpick, he has very little real power. Calica’s hitting style and speed have allowed him to rack up 53 doubles and 10 triples in 268 games, but he has just 15 home runs over that span with six in both 2017 and 2018.

Calica’s transition to Columbus (which should happen by opening day 2019 as he has nothing left to prove in Akron) will be an interesting one. Huntington Park has a reputation as a bandbox of sorts and this can sometimes give a false impression of a player. One such example was Eric Stamets, who had never hit more than 7 home runs in a season, but was a good doubles hitter and went on to hit 15 home runs in 101 games with the Clippers in 2017. He stuck around in 2018 and saw that number drop back to five in 78 games.

Because of the environmental factors, I expect Calica’s slugging numbers to increase slightly, but at 24 years old already, I don’t expect him to increase his legitimate power considerably. While there have been players with surprise power in recent years, both Francisco Lindor and Jose Ramirez made their debuts before the age of 22 and saw great increases in power as they hit 23-24 years old. This doesn’t mean Calica is set for a career of sub 10 home run seasons, but it does mean he is unlikely to join the 30-30 club.

This lack of power could stick him into a situation where he is lumped in with Mercado and Greg Allen as speedsters whose primary value is on defense and the bases. The main difference specifically, however, is that while Allen has a tough time getting his OBP to .300, Calica is pushing .400. The ability to get on base consistently could be what sets him apart and ultimately makes the difference between starter and bench outfielder on a Major League roster.

Calica gets an at bat during a 2018 MLB spring training game at Goodyear Ballpark. – Joseph Coblitz, BurningRiverBaseball

Ultimately, he isn’t Major League ready yet, but is very close and could potentially come up before the end of 2019. I see him beneath Marabell and Mercado as far as readiness is concerned although he potentially has a higher ceiling than either. He has pushed himself above Papi and his Rubberduck teammates from 2018, Tyler Krieger and Ka’ai Tom.

Calica’s greatest benefit could be his incredibly high floor. Even if he doesn’t become a MLB starter, his ability to play all three outfield positions at an elite level, run the bases well and take a walk will always make him valuable to a MLB team. The Indians are currently a team in great need of such assets, so he is ultimately a great fit with the franchise and could slide in next to Bradley Zimmer in the near future or even force Zimmer to a corner as he takes over center himself.