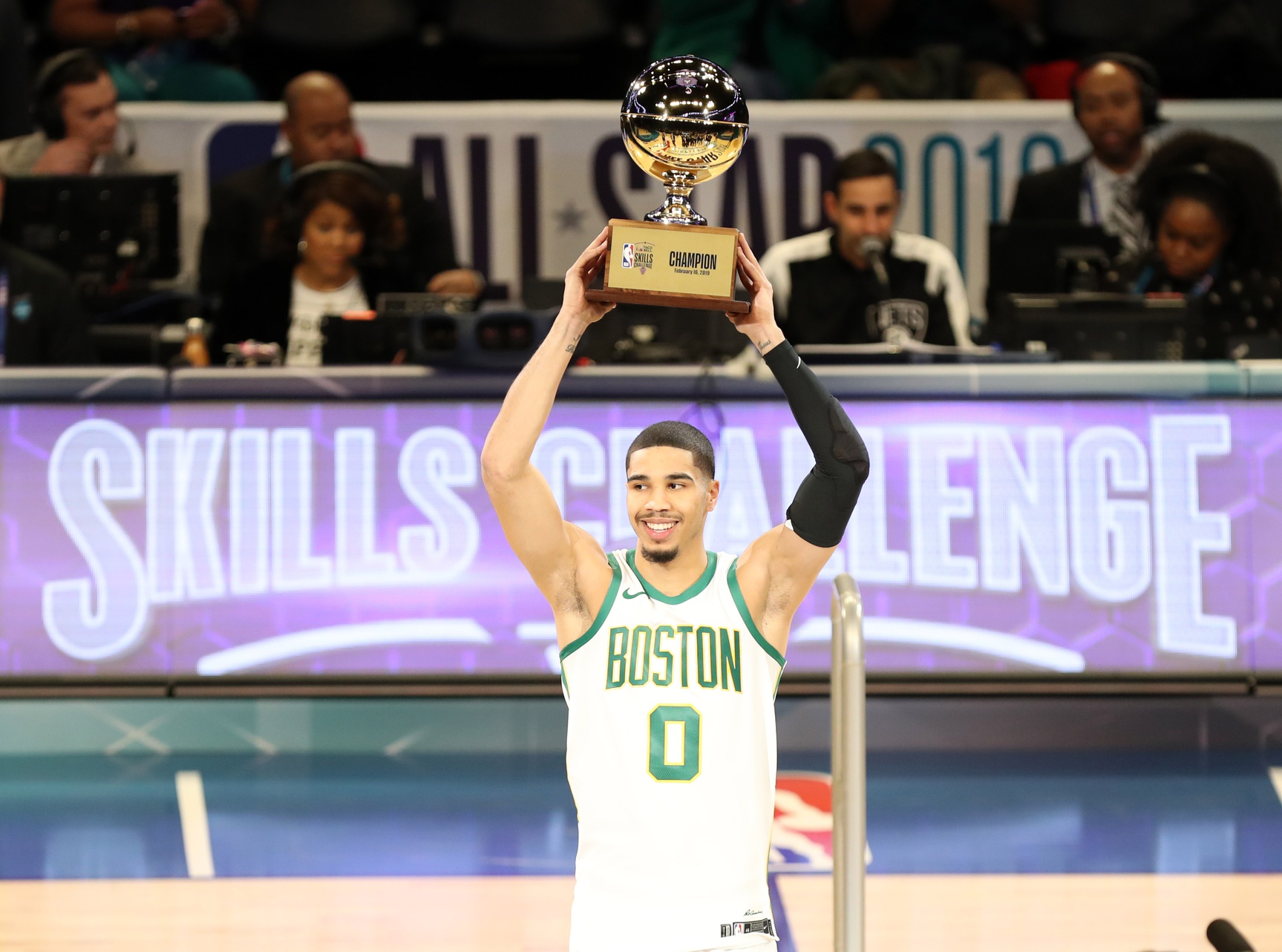 “The previous two rounds, the guys were ahead of me, so I let them get a shot attempt so I could get closer to the 3-point line,” Tatum said. “I didn’t want to give Trae a chance and, honestly, I didn’t know I was going to make a shot. I just had to give myself a chance and throw it up there and it worked out for the best.”

The Skills Challenge was sponsored by a national Mexican fast food restaurant. With Tatum nicknamed ‘Taco Jay’ because of his love for them, could there be an endorsement coming?

“I’m going to call [the company] tomorrow and tell them I need a deal,” he said. “I need to be on the commercial. I love tacos.”

Another great moment for the NBA’s next great superstar. I’m happy for the kid because he hasn’t had the smoothest sequel to a phenomenal rookie season.

Someone tell Jayson that he won’t have to call Taco Bell, they’ll be calling him.

Earlier in the day, Tatum professed his desire to remain in Boston:

“You start to understand that this is a business,” Tatum told ESPN’s Sage Steele on Saturday at the NBA’s All-Star Weekend. “I play basketball and I’ve just got to control what I can control, and I love being on the Celtics.

“I want to play there my whole career.”

“I don’t take it personal,” he said. “I understood coming into the NBA that it’s a business and they have to make the best decision for them, whatever that may be. Especially right now in a contract, I can’t control anything.

” … It didn’t really bother me. I wasn’t really fazed by it. A lot of it was rumors, I don’t know if it was true or not, but my job is just to play basketball. I didn’t get fazed by anything I saw on TV.”

I’d love to have Tatum in Boston with Anthony Davis and Kyrie Irving for the next half-decade. The trade talks for AD will be fascinating. Which combination of Tatum, Jaylen Brown, Marcus Smart, and draft picks will it take and how far is Danny Ainge willing to go?

There’s no chance I’m giving up Tatum AND Brown. That’s all I know.

On Page 2, Kyrie Irving’s health and a lot of mumbo jumbo.

Asked where he was health-wise and if he expected to start in the game, Irving replied simply, “Yeah, I’m good.”

“You want to be the top team in the East. You want to be one of the top teams in the whole entire league, you know, have playoff position, enjoy the regular season and, you know, have fun. At the end of the day, I’ve also played in Cleveland in my beginning years, like, it wasn’t fun every single day. Like, things happen within the locker room and you’ve just got to move on. And the maturity of young players understanding that, that it’s just part of the business — you know, it’s not college, nobody’s babying you, you guys aren’t going to baby anybody, you’re not going to hold back your tongue or your words — so it’s OK to make mistakes. The judgments outside don’t really matter in terms of what you feel as yourself. Nobody’s going to validate who I am anymore. I used to do it. I struggled with it, just mentally, just really figuring out how powerful words are and what they mean. Honestly, nobody can tell me who I’m going to be anyway, so once I started believing that, all this just became a lot easier.

If Kyrie Irving is cleared by the doctors, I don’t have a problem with him playing 15-20 minutes in a defenseless All-Star game. Save your vitriol for talk radio.

Brad Stevens is in the house at Red Sox camp pic.twitter.com/1K8QKQ4CWl