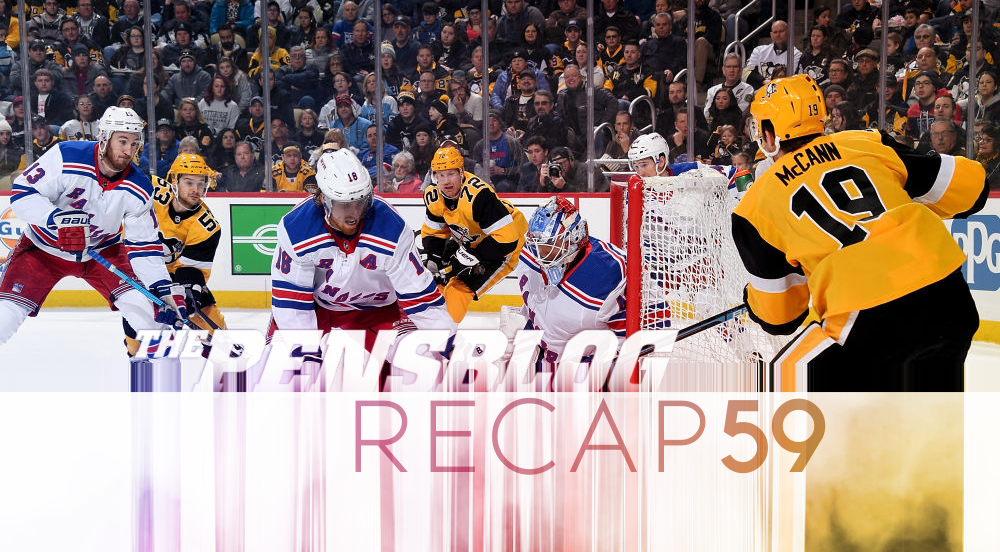 You know that old cliche?

If you like cliches, that’s what this game was.

Because coming into Hockey Day In America, a National Emergency was declared at the Three Rivers.

Not because of a caravan of three-eyed mutant fish in the Mon or because someone trafficked their boat into the fountain at Point State Park.

It was because the Penguins came into HDiA on the outside of the playoff picture looking in.  With their game in hand over the Canes, they made some mistakes and made it interesting in their 6-5 win over the Rangers, but won nevertheless to put themselves back into a Wild Card slot, scoring 5 goals at 5v5 after scoring just 1 at evens the day before.

Things are two turnips in heat, but when all is said and done, the Penguins are only 2 points back of #2 in the division.  Maybe the Hockey Day In America National Emergency was a sham after all.

Lined up and ready to roll. pic.twitter.com/1YFMNIgnaw

HCMS made two changes to the lineup that burned out against the Flames one day prior, bringing Domink Simon back into the fray in place of Garrett Wilson on 4LW, while DeSmith got the start in goal despite Murr only playing 2 period against Calgary.  No King Henrik at the other end because his career ended in Pittsburgh 3 years ago.

So some guy named Alex George or whatever got the pipes.

Pens generated nice chances early, forcing George to make some saves he didn’t really know he made.  But mayhaps the best sequence of saves came from Casey DeSmith after Kreider set up shop on his doorstep.

But at the 7:26 mark, Kevin Shittenkirk took a hooking penalty on Money Bag after Guentzel got in behind and looked to get in on a breakaway, but they couldn’t do shit with it.

The goaltending showcase continued as the period wore on with both DeSmith and George trading off high end saves.

But it was the George’s own teammate that was his undoing.  Coming directly off an o-zone draw, Crosby won it back to Letang and that was all she wrote.

Letang’s move at the top of the circle is elite here.  Snappin’ ankles and working angles, swooping in and throwing a backhander off Shittenkirk’s skate and through the wickets.

However, with 79 seconds left in the period, the Pens went to the PK with Rust getting a lone roughing penalty after a post-DeSmith-save scrum for some reason.

The Rangers used a recover back into their own end of the ice to set back up and slash through the neutral zone with minimal effort, smoking Cullen and Blueger and getting set up.  Zuccarello, Hayes, and Shittenkirk threw the puck around, panicking the Pens PK and pulling them apart and opening up a lane for Zuccarello to try to hit Zibanejad lurking at the backdoor for a gimme goal.

Except as the pass came across, Blueger got his stick in the way to break it up and put it into his own net.  Fuck you, PDO.

Pens PP early when Pionk went off for tripping Cullen.  This after Pettersson nearly set up a goal that would’ve even made ESPN’s highlight reels.

This would've been some goal if it had gone in. What moves and what poise from Pettersson up high to set it all up. pic.twitter.com/XFiuiUCewV

Rags got the kill and got away with a high stick in the slot on Malkin, but then got hit with too many men about a minute later to give the Pens their 3rd PP of the game.  PP1 had some ten bellers, but couldn’t find twine.

The Pens would get another one with 10:05 left after Zibanejad ran Ruhwedel from behind.

It took the Pens 4 tries and their 2nd PP unit to finally find the breakthrough, but they got themselves a PPG late on in the Zibanejad penalty.

PP2 got themselves a controlled breakout and Jultz’ unreal stretch pass got them into the zone.  From there, Simon burrowed down low with Guentzel and Bjugstad providing the support before Bjugstad ripped two shots on net.  The second was steered in behind the goal by George, MP28 latched onto it and Bjugstad went to work so hard that the YMCA people dressed up like him wrote a song about it.

Seriously, Bjugstad’s effort down low to hold everyone off, play catch with Schultz to open up the lane to feed Pettersson was something special.  Great shot from Pettersson, too.

On the next shift, Brian Dumoulin did some heavy lifting and engaging in Warrior Mode.

Then, that fucker would head down to the other end and net his second of the year.

Pens with the nice passing to throw it through the neutral zone and head in on a 4v2.  Pettersson joining the rush with speed allowed him to get in on the forecheck himself, smoke Shittenkirk to the loose puck and get it to Crosby in the near corner to feed Dumo jumping off the bench as all 5 Rangers focused on 87.

Pettersson’s reach and effort here will not get enough attention, but Crosby doesn’t have a chance to put it on a platter for Dumo without MP28’s play here.

And in this case, one supposes it was.  Just under 30 seconds later, the Rangers had themselves a controlled breakout where they were able to beat the Dumoulin’s pinch up the wall with a quick chip pass to spring a mini 2v2 that was, for all intents and purposes, a 2v1.

As Letang pulled over to try to shutdown Zuccarello hitting the line cleanly, Zuccarello was able to chip it by 58 to Kreider to head to the net unabated.  Malkin did really to get back and sorta break it up, but Zibanejad was hanging out on the back stick to put it on goal, leaving it to sneak through DeSmith and sit on the goal line for Zuccarello to bang home.

Then, about 3 minutes later, the Rags were level after gaining the zone with a chip pass at the blue line.  They battled to throw the puck back out front for McQuaid to step into one at the point.  He missed the net, but the persistent checking from the Blue Shirts forced Ruhwedel into a tough situation where he wasn’t able to get a clear.

NYR took it, went low to high for a point shot that got deflected off the iron for Hornqvist to take temporary control of the puck, kinda get tripped and kinda lost and edge, turning it over to Strome to draw level.

This sport, you guys.  Off the post, Hornqvist goes down and Strome just capitalizes.  You could run a zillion AI simulations to try to produce this exact goal and the computer would tell you to find a new hobby before combusting.

With about 12 seconds left in the 2nd, Crosby got rung up for high sticking Pionk on a missed stick lift, putting the Pens down a man for nearly the first 4 minutes of the 3rd frame.  You could really sense how much this was potentially a huge turning point in the game and the Pens PK rose to the occasion.

With the kill, the arbitrary idea of momentum is sports swung in the Penguins favor.

Despite them nearly getting themselves into some trouble with DeSmith challenging his inner Marc-Andre Fleury trying to handle and set up the breakout for his defensemen, they instead vomited all over their asses and nearly pissed the puck away down low, only for Jultz, Pettersson, and Rust to launch the puck off of the near wall to Guentzel coming off the bench.

Money Bag wasted no time slipping it to 87 hitting the neutral zone with speed, hitting the offensive blue line, doing some wild ass Sidney Crosby shit to swing around and drop it off to Letang jumping off the bench.  58 ain’t missing from there.

This stuff from Crosby here is what wet dreams are made of.

Sidney Crosby get all the way real with this pic.twitter.com/SHRDxheDJT

Under 3 minutes later, the Pens found the back of the net again as Freak Show Geno came alive.

HCMS switched up his lines in the 3rd, moving ZAR up to the left wing with Gene and Phil! and it immediately paid off.

Watch their movement here early in the goal sequence.  Malkin’s pass to ZAR nearly comes off, he still gets a shot attempt, but it’s Phil!’s work ethic backchecking that’s a huge difference.  His demonic backcheck forced a turnover and allowed Malkin the chance to collect it in the neutral zone and swing it over to Jultz on the near wall to hit ZAR and regain entry.

Phil! didn’t just stop with a good backcheck, though.  ZAR gets to the corner and gets pinned, but slips it down along the wall.  Phil! gets on his horse and ghosts in, finding Gene at the side of the net for the banger.

This pass, too, is what wet dreams are made of.

Except when Evgeni Malkin has the motor running on that expensive high octane fuel.  There are no words to describe this goal, but give Brian Dumoulin a thirdary assist here with the great play in the d-zone to turn ZAR and Phil! loose.

But Evgeni Malkin, fam.  What a goal.

Shut it down.  Turn it off.  Crank that shaft and throttle some beers.  That’s a backbreaker.

The Rangers made it interesting but only so that Malkin’s spinning backhander could be the gamewinning goal that it deserved to be.  Really nice of them, actually.

Pens switched off here a little bit in the transition, but it also didn’t help that they had 3 forwards committed and Johnson, with no cover in behind, decided he was going to pinch at his blue line on a low percentage play.

His pinch allowed Namestnikov to stop up, protect the puck, and swing a pass across the ice to Vesey hitting the line with speed.  His speed left Schultz for dead, but DeSmith bailed him out.

Unfortunately, Vesey was able to get control of his rebound, go up to the point with it for Staal and DeAngelo to play catch before the latter found Kevin Hayes, who had glided into the high slot.  Watch here as DeAngelo winds up fora slapshot.  Johnson is running around looking for someone to cover, but both Crosby and Guentzel are focused on the shot.  This allows Hayes to spin out of the high slot and move about 10 feet to his left to take the pass, beating DeSmith high stick side.

As the game wore on, George was pulled with about 2.5 left to get the Blue Shirts the extra skater.  They just wouldn’t go away because, again, they wanted Malkin’s obscene sex goal to be the game winner, turning what should’ve been a 6-3 loss into a 6-5 loss.

But whatever.  Take the 2 points and run.

Casey DeSmith gives up 5 goals: “What an effort by a sweet boy maybe this guy deserves a promotion.”