Wild Go Through the Motions in 4-0 Loss to Anaheim 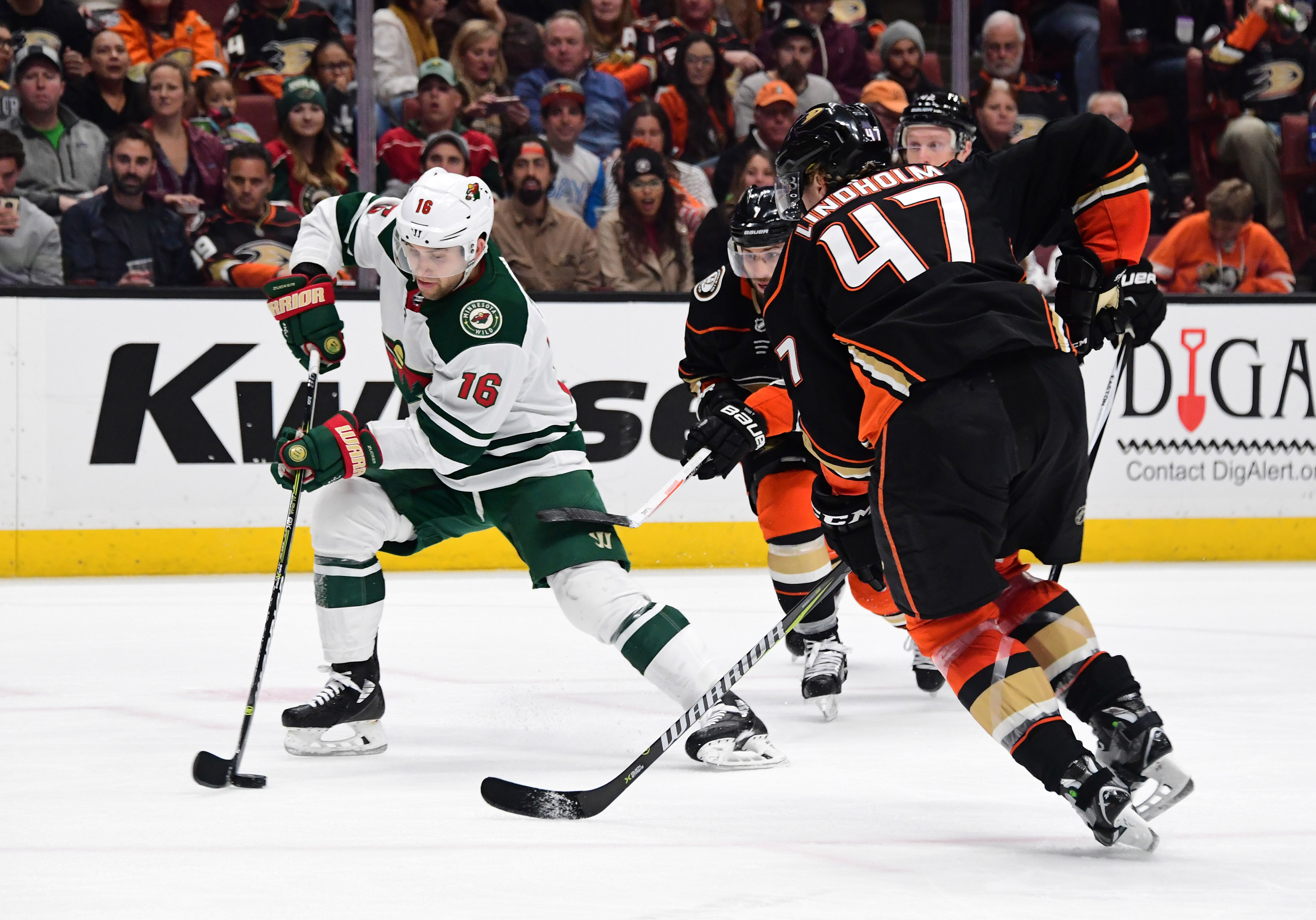 Wild Go Through the Motions in 4-0 Loss to Anaheim

We’ve all be embarrassed at some point in our lives.  Maybe we trip and fall in front of a bunch of people, maybe we suffer from a wardrobe malfunction but we are familiar with that sense of shame and humiliation.  Imagine suffering that embarrassment on national television let alone 19,000+ people that are mostly made up of your fans.  The level of personal shame should be pretty significant right?

Was any member of the Minnesota Wild embarrassed after being boo’d off the ice for the 1st & 2nd intermissions as well at the end of the game?  Maybe, but it’s tough to say by the lukewarm comments the players continue to make during this losing streak.  The Wild now face an opponent that is going through a fair amount of shame of its own in the Anaheim Ducks.  That situation as true the last time the two teams faced one another and the Wild gifted Anaheim a victory.  Will they do the same this time around?

1st Period Thoughts:  The Wild looked pretty calm to start the game and beyond a long range shot by Luke Kunin, the Ducks looked like the hungrier team early on.  The Wild dumped in pucks and then sort of half chased after them making it fairly easy for the Ducks to transition and work the puck out of their end of the ice.  NHL linesman Devin Berg would hit hit with a puck near a sensitive area of his body that had him fall to the ice in pain after a short on-ice evaluation by the Wild training staff he was helped back to the locker room.  Minnesota tied to attack with speed as Mikael Granlund sped into the Anaheim zone but his drop pass to Charlie Coyle was intercepted and the Wild didn’t even get a shot on goal.  A few minutes later Eric Staal would skate into the offensive zone for a drop pass to Jordan Greenway who stepped into a slap shot that was steered wide by Ryan Miller.  Devan Dubnyk then had to stop Nick Ritchie from close range.  With the Ducks not challenging the Wild through the neutral zone they’d go on the attack and Coyle fired a shot on goal that Miller didn’t quite have covered up when the officials blew the play dead much to the chagrin of the home crowd.  The oh so close chances continued for Minnesota as Greenway centered a pass that was redirected on goal by Nick Seeler that just caught the shoulder of Miller and went wide of the cage.  Both teams were being fairly diligent defensively.  The Ducks would counter with a rush of their own as Brandon Montour went flying down the slot but his wrist shot was denied by Dubnyk.  Anthony Bitetto drew a cheer as he leveled Devin Shore along the wall.  Minnesota would sustain some offensive pressure by getting its cycling game going but unfortunately when they pulled the trigger the Ducks were able to get bodies into shooting lanes and nothing really ever reached Miller.  On the next shift the Wild were able to cause some chaos that had Miller sprawling in his crease after getting bumped into by Staal but Minnesota couldn’t manage to settle the puck to send any shots on the open goal.  The period would end with both teams knotted at 0-0 and not many real dangerous scoring chances although Minnesota carried most of the play.

2nd Period Thoughts:  The 2nd period started and it looked like two teams mostly going through the motions.  Not a ton of hustle, checks were not being finished with authority as much.  Ritchie would redirect a Carter Rowney feed that rang off the left post.  A few shifts later, Dubnyk had to make a nice glove save on a shot by Rickard Rakell as the Ducks were on the man advantage.  Minnesota’s penalty killers started to challenge Anaheim’s zone entries and they were able to kill some time off the Ducks’ power play.  Unfortunately it was not enough as Shore sent a backhander from the slot that went off the post and Dubnyk partially knocked down and Max Jones was able to crash the net and jam a puck home.  1-0 Ducks.  After a long look at the play, the Wild considered challenging the play would let it stand and Minnesota found itself playing from behind yet again.  Minnesota was standing around its own zone, and they’d take a high sticking penalty as Kunin caught Hampus Lindholm in the face.  The Wild would try to go on the attack while shorthanded as Joel Eriksson Ek let go of a shot off the rush that hit the post.  The Ducks’ power play would move the puck quickly and they had a few nice set ups for Rakell and Adam Henrique that nearly cashed in but Minnesota was fortunate to come away unscathed and still trailing by just one.  The Wild went through nearly half the period before starting to generate some mild offensive pressure of their own as they had a few shots from the perimeter but often without any screens and Miller was able to absorb the puck fairly easily.  Jason Zucker would finally turn on the jets and get around a defender where he tried to work a wrap around bid only to be foiled by an alert Hampus Lindholm who helped cover the post for Miller who was still coming across his crease when the attempt was made.  Minnesota would sustain a fair amount of puck possession in the offensive zone but no one was willing to work their way in close so it was fairly easy for Miller to see the puck and the Ducks to sweep away anything that might be remotely dangerous.  There was a little pushing and shoving late in the period between Staal and Ryan Kesler but nothing would really come of it other than some chirping.  Sadly, that was about the only fire the Wild showed all period.  A few boo’s rained down after a pretty sleepy 2nd period.  1-0 Ducks.

3rd Period Thoughts:  As the 3rd period started, with the Wild trailing by one they’d draw a penalty as Rowney hacked Coyle on the wrist for a slashing call.  Minnesota didn’t do a heckuva lot with the man advantage as slow puck movement and the Wild probably didn’t even make the Ducks even a little uncomfortable as a point shot was knocked down by Miller and no one from the home team seemed to want to do the dirty work to get a stick on the rebound.  The power play would expire without incident.  The Wild would appear to jam a shot by Miller but the officials again blew the play dead even though the puck was clearly loose which drew the ire of the 18,000+ in attendance.  The Wild would get another power play, but again slow puck movement only resulted in a few slap shots from Granlund and Pontus Aberg that never reached the goal.  Minnesota was spending almost the whole kill in the offensive zone but the Ducks were content to let the Wild shoot from the perimeter without consequence.  Lindholm would haul down Granlund as he tried to track down a puck and Minnesota stayed on the man advantage.  The Wild was trying to set up a back door play but the Ducks did nice job of deflecting passes and thwarting those attempts.  As the Wild tried to work pucks in closer, but despite the effort not many shots were reaching Miller.  Minnesota finally started to show a little desperation and Granlund had a chance from the slot that was stonewalled by the Ducks goalie.  The Wild were swarming but despite rebounds being given up by Miller, Minnesota didn’t seem to have the determination to get to those potential chances.  The Ducks would then finally break out of their own end and Corey Perry sent a shot on goal that beat Dubnyk high glove side.  2-0 Ducks to moans from the home crowd while other fans got up and made an early exit.  A shift or two later, the Ducks raced in on another rush and Kesler would rip a wrist shot that beat Dubnyk with ease.  3-0 Ducks as more fan made their way for the exits and some boo’s rained down as well.  Lindholm would bury an empty net goal to seal a 4-0 victory.  The boo’s were again rained down from the home crowd who saw their team lose all 4 games of their 4-game home stand.

D – Jacob Golden (Erie, OHL) ~ the former Harvard commit certainly has been more of a regular on the scoresheet as he’s received more ice time and opportunity since being traded to Erie.  he had an assist in Erie’s 8-5 loss to his former team, the London Knights on Sunday.  Golden has 2 goals, 14 points, 10 PIM’s and is a -5 in 51 games.