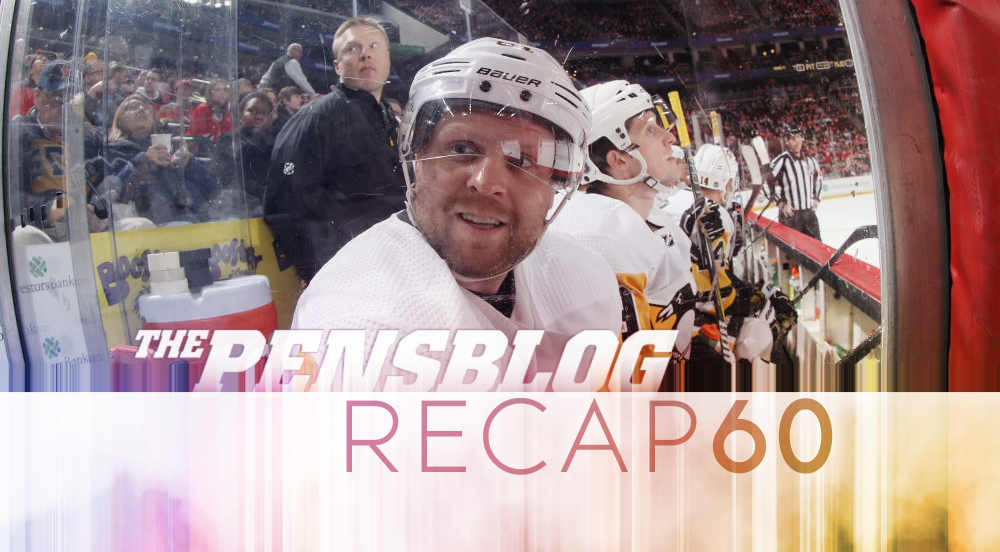 Coming into this game, no one in the hockey universe could’ve predicted anyone would’ve had a worse night than Artemi Panarin.

For as bad as Panarin’s night was, the the shit shower of despair left him about 3.5 hours later, spewing brightly (browly?) right down upon Keith Kinkaid.

See, Kinkaid was victimized by having to play a hungry Penguins team, desperate to claw their way up the standings and into one of the 3 Metro Division playoff spots.  He was brutalized by a Penguins team that scored 4 goals on 28 shots.  But, the worst of it all came postgame, when he was murdered with a dull hatchet by his coach, John Hynes.

Reporter: "Keith seemed to think he was the victim of bad bounces. Did you see it differently?"

Imagine being owned offline that hard.  That’s like shitting your pants at a college party or walking in on your parents having sex.  That’s something you don’t ever truly recover from.  That squish is forever cemented within your limbic system.

No idea if Kinkaid will even be on the Devils roster come noon today, but one thing is for certain: the Penguins are 3rd in the Metro, two points back of Washington.  The Jackets have a game in hand and are 2 full points back, while the Canes are another point back after both teams lost last night.

That’s how important this win was.

Here's a look at the forward lines and defense pairs that the Penguins will be using tonight against the Devils. pic.twitter.com/Iv9xtA2bok

It’s not totally like HCMS to make lineup changes after finding a winning formula, but he did just that last night when he brought Tanner Pearson back into the fold in the 4LW hole, replacing Teddy Blueger in the lineup.  A nice finish to the win over the Rangers on Sunday afternoon kept ZAR-Malkin-Phil! together, bumping Bjugstad back into the 3C hole between McCann and Hornqvist.  Murr vs. Kink Aid between the pipes.

It took the Devils just over 2 minutes to put the Pens behind the 8-ball early.

Coming from a defensive zone draw where you’d bet your house on Matt Cullen winning the draw, the old guy got himself kicked out of the draw.  Simon stepped in, lost it, and shit hit the fan.

As Hischier wins it back to Mueller (not that one), Mueller baits in Cullen storming the gates, and moves it to a freed up Marcus Johansson.  With Bratt peeling off the right hash, Letang has to follow him here.  But somewhere, his signal gets crossed with Dumoulin’s.

Simon does well in tying up Hischier.  Cullen is on his point man in Mueller.  Pearson is shadowing the other defenseman, as he should as the LW.  Letang chases Bratt, but as soon as Bratt turns to face MoJo, 58 just…stops.

It looks like he stops up for two reasons: A) to get in Johansson’s shooting lane and 2) to pass Bratt off to Dumoulin.  But because everyone was already manned up, Johansson had a free look at the net.  Simon recognizes this and jets out to him, leaving Hischier in the process.  Pearson, at this point, is taking up space and both he and Dumo head towards Hischier.  Because Dumo steps up at the same time that Letang passed off Bratt, it opened up Bratt to take Johansson’s feed and bury it by Murr.  Yiiiiiikes.

But a couple of minutes later, the Pens were level with their typical quick strike bang bang.

Big time play by Letang to break up the shot attempt and spin it the other way for Guentzel to exit to Crosby.  Sid and Rust got the combo going to enter the zone while Dumo joined in the rush and drove the net, but Crosby’s pass just eluded him.  Dumo had the angle to the loose puck, though, sending it back down behind the net to 87 in his office.

And you just know he’s not making any mistake from there.

Sid picks his head up, sees ZAR jumping in off the bench and that was that.  All world pass from 87.

ZAR skated in from Staten Island to score this pic.twitter.com/ljeFiB3FzW

Malkin to the box on the following shift for running Kink Aid after the refs missed calling the Pens for too many men.  They killed it off pretty easily, but…

About 3 minutes after the kill, the Devils took the lead again.

This time, it was the Penguins punished in transition. First, John Johnson got the puck in deep and went after it.  This is fine.  Malkin jumped in to help and they got the puck free, but only as far as Johnson, who immediately turned the puck over to Jesper Bratt.  This is not fine.

If anyone can tell me who Johnson is trying to pass the puck to here to retain possession, hit us up in the comments because we Don’t Have A Clue!!!

Anyway, Bratt took the pass, slowed it up, hit Mueller for Mueller to chip it high off the glass and over the slowly retreating Johnson while Johansson was streaking through the neutral zone.

Phil! was back covering up for Johnson, but the puck was Grenade City all over Phil!, allowing Johansson to take it and go shelf on Murr.

Tough break for 81 and 30 here.  You could’ve put two goalies in net and they weren’t stopping this shit.  Unreal finish.

But about 4 minutes later, Brett Seney went off for tripping Pearson to give the Pens their first PP of the game and they did not let the opportunity to draw level slip through their dick handlers.

Despite the Pens powerplay being Good Again, it wasn’t PP1 getting the job done.  But with PP2 out, Bjugstad and Pettersson played some catch on the left side to open up a shot for Jugs to grip and rip.

One angle looks like it goes off Severson’s stick and in.  Another looks like Money Bag gets it in front.  Who knows.  Who cares.

Total snoozefest to open the first half of the period, then…

Jake just walk into the NZ and attack
He hit this deke, the trap gon’ collapse
He been broke my whole life, he got no clue what to do with these racks
Pass be laid, Rust snatched, goal scored, straight facts

Not enough words on the planet to describe Money Bag going coast to coast and feeding Rust for his 17th.

A few minutes after the goal, the Devils caught the Pens and broke through on a 2v1 as Zajac and Wood stormed in on Letang, but the Professor wasn’t having any of it.

Defending a 2-on-1 101 with Dr. Kris Letang, Professor of Norris pic.twitter.com/vVLX22RvSc

If they score here, we’re talking about a different ball game.  But they didn’t and it set the stage for the Pens to pull ahead by 2.

Whoever said Phil Kessel is a liability and doesn’t go to the dirty areas eats earthworms for a midday snack.

Watch the ZAR-Malkin-Kessel line go to absolute work down low.  They could’ve formed their own union with shit like hard hats and fall protection themselves, aided by a nice little pinch from Ruhwedel in the process.  Dudes just go to war with 71 getting the feed to Ruhwedel for a bomb.

Add these three playing on meth and fetamines to your spank bank, fam.  Beautiful stuff.

With the way this puck is moving, Kink Aid had no chance.  Maybe that was the bad bounce he was talking about????

Up 2 in the third, the Pens just skated the wheels off the Devils, protecting their lead the best way they know how: spending it in the offensive zone.

this guy cannot do anything right pic.twitter.com/VGaQkS8ok6

Still, the Devils managed to create some chances as the period neared a close and Murray was great in turning each one aside with grace.

…Until just under 5 minutes left.

Now, your favorite Facebook poster or local Narrative Writer will see this last goal and say something like this.

MATT MURRAYS ADVANCED STATS SUGGEST THAT HE STOPPED THAT SHOT.

So let’s take this one step at a time.  First, remember that save right before this?  No?  Well, here it is again.

Blog Boy Security Detail for Matt Murray have logged on and we will not be acknowledging that Miles Wood goal and will instead focus on this beauty of a save he made right before it pic.twitter.com/a2ET36nIcl

Back to the goal.  So Crosby loses the draw and the whole play was designed around Zajac winning it.  Miles Wood takes off as soon as he sees his team gain possession and Severson sends it.

Dumo defends this well, reading the play and matching Wood’s speed.  He gets his stick and body in to disrupt Wood, causing Wood to lose control of it.  Murr goes down, seemingly expecting a real shot.  He’s got it tracked and stopped, but looks like he realizes how goddamn slow it’s coming in and goes to just grab it so Wood doesn’t have a chance to bang at it in his pads.  When he starts to lean over and reach down, his left pad lifts up and the puck slides under.  No doubt Murr would like to have that one back and should’ve made the save, but shit happens sometimes.

You know who else has given up the odd weird, bad goal every once in a while?  Literally every goalie to ever play any game ever.

Pens got a powerplay with 2:51 left, Devils got the kill, but it ticked the clock down to under a minute remaining.  They couldn’t get the puck into the Pens zone and Kink Aid out of the net until about 30 seconds left and by that, the Pens just smothered them.

Shorks come to the Paint Can tomorrow night for a big one.  Go Pens.