Your Morning Dump... Where Kyrie speaks his mind (again). He's 1-1 on the week 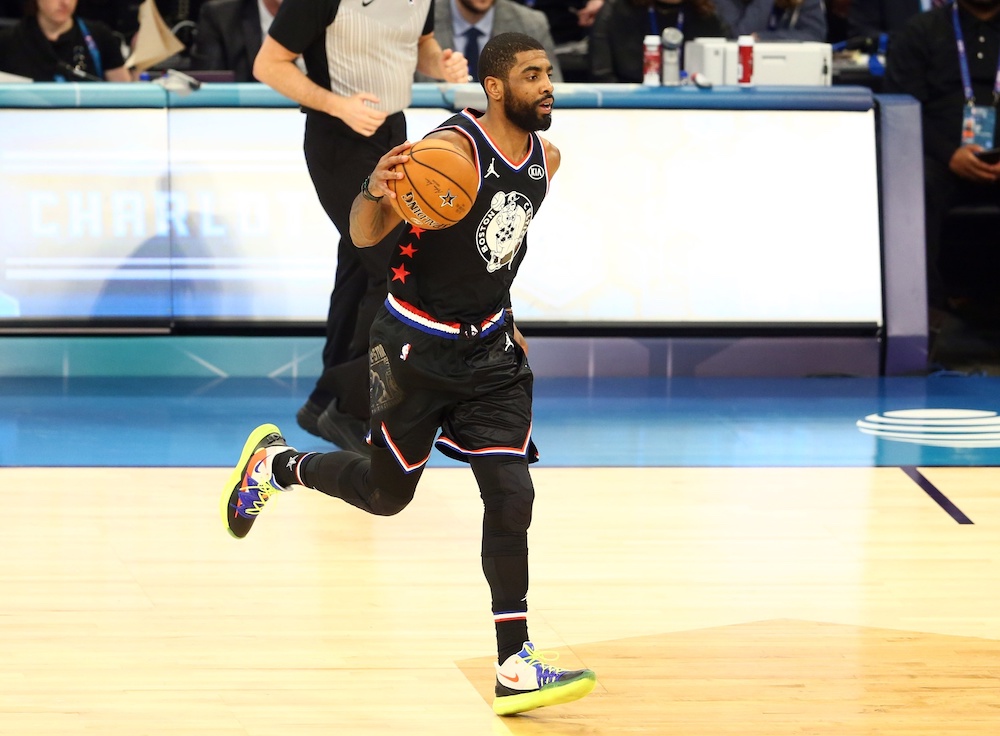 Your Morning Dump... Where Kyrie speaks his mind (again). He's 1-1 on the week

“It’s a lot to figure out all in one year,” Irving said. “It’s been a trying year for us. Because we basically have a bunch of young men in our locker room that feel like they’re capable of doing a lot more of what they’re doing.

Irving delivered a similar message back in January. But this time, he named names, referencing backup guard Terry Rozier while explaining the effects of Boston’s minutes crunch.

“I initially didn’t play the minutes I wanted to play. I’m 26 years old heading into my prime. Like why do I have to wait for anybody?” Irving said.

“Terry Rozier — he played in the playoffs (last season), he did extremely well. Coming back, that’s a natural competition that me and him have. Like, it is what it is. No one wants to say it, but I will.

“It’s part of their growth. When you have winning in mind, then you’ve got to do what it takes, but you’ve got to understand your teammates.”

Kyrie Irving vs. The Media, The Media vs. Kyrie. Two Kyrie/Media stories in today’s Dump and I’ve got Kyrie at 1-1 on the morning — Kyrie loses this round and he wins on page two.

He loses here because he had yet another chance to squash a question about team chemistry and morale without mentioning how hard the season’s been and how confused and frustrated the young guys are, and yet he did it again.

First of all, we know the season’s been trying. You’ve mentioned it a thousand times, Kyrie. You’re also 37-21, 16 games over .500 and have played some of your best team basketball in the last two months (some of the best basketball in the league). How about next time you’re asked about the season, you reference how it’s been tough, but it seems as though the team is turning a corner and how you’re excited about the home stretch. You don’t need to guarantee a championship like Jayson Tatum, but at least double down on some of the post-game comments you’ve made after big national TV wins, something to the effect of “when we have it all going on, watch out.”

Instead, as the team gears up for a big game in Milwaukee, you make more comments about the young guys, “their” growth and “your” mindset to win, as if that mindset is unique to only you.

Look, I don’t know if this has any effect on team chemistry going forward, but something’s obviously been off all year and the team clearly plays a bit freer when Kyrie isn’t on the court. I’m not making the “Cs are better without Kyrie” comment in regards to sheer talent, but maybe they’re better of psychologically because of comments like these that might be hanging over the team.

I’d love to know how Terry Rozier really feels about Kyrie’s comments to Rachel Nichols. Is he cool with this? The counter-argument is, “was Steve Kerr cool with Michael Jordan when he punched him in the face?” or pick any example of an alpha challenging his comrades. How about no, Steve Kerr probably wasn’t cool with that, but that was Michael F’ing Jordan. This is Kyrie Irving. He’s not MJ. And we have no evidence that it’s working! If Kyrie was making comments like these and then the team was winning in their immediate aftermath, then maybe we’d know they’re having the desired effect.

You know when Kyrie can have this conversation on national TV? When the season’s over or when he’s re-signed or left Boston this off-season. This is not a “shut up and play” argument. By all means, Kyrie, talk to the media; you’re the team’s best player and therefore it’s de facto leader. Say it’s been a tough season but then say you’re excited with where things are headed. And if you don’t feel that way? Then yeah, probably say nothing at all for the likely benefit of your young teammates.

I hate that I even have to write about this because it’s driving me crazy. On the other hand…

On page 2, where bro time becomes a free agency meeting

So it really doesn’t matter what was or wasn’t said on the hallway video of Irving and Kevin Durant from prior to Sunday’s NBA All-Star Game. Where some sleuths have deduced that they were talking about the Knicks, there is no conclusive proof of anything.

Irving predictably didn’t want any part of it after yesterday’s practice when reporters asked if he wanted to clarify the exchange with Durant or cool the speculation.

“I don’t dissect it at all,” he said. “I disconnect. So anybody’s stories or social media, like, I’m completely off it. I just don’t have the care for it. It ruins locker rooms. It ruins like confidence in people. And it’s just a fictitious way of feeling validated in the world. So it really doesn’t matter to me.”

Asked if he wanted to correct the perception of what was said, Irving seemed more to dislike the entire process of how things can be picked up and then draw interest.

“What does that matter to me?” he said. “Somebody who was … I don’t have a private life when I’m out there in the NBA. Somebody wants to take a video and, I mean, it is what it is. Pour water on it? I’m a human being talking to another best friend of mine. Like, it’s just crazy. This is the stuff that just doesn’t make the league fun. Like, it doesn’t make the league fun. Nobody helps promote the league even more by doing (expletive) like that, of just fictitious putting things on what we’re talking about. It’s just, it’s crazy. I guess that’s what you wanted, huh?”

When it was noted that this stuff was out there, Irving said, “Is the internet real for you in your life? It’s my life. It’s two people talking, having a conversation. If this was the real world, would it be anybody else’s business? But it’s a video of somebody assuming what we’re talking about, right? Making an opinion about it. So why would I care about it? Why does that have an impact on my life? Why are you asking me those type of questions? About cooling it off, for what? I don’t get it.”

All that frustration I just spewed about Kyrie Irving? It’s tenfold for the media in this situation. Holy crap. I’ve always had that little kid dream to be in the NBA, but I think I’d love to just be a 6th man or a bench-warmer rather than a superstar. You literally can’t take a shit without someone with an iPhone coming into the bathroom before you flush, taking a photo of it, posting it to twitter or instagram and including the caption:

[star player who is entering free agency] takes dump, came out in the shape of the state of New York. Is this a sign?

Counter-argument, Kyrie Irving could put this all to rest by re-committing to his October comments about wanting to stay in Boston, and by not doing so he opens himself up to all of this scrutiny. To an extent, sure, but he actually got grilled about having a conversation with a friend of his with whom he was spending the weekend playing basketball. That’s a level of scrutiny I would not wish upon anyone, and it’s a line of questioning like that, which in turn, emboldens Irving to not promise anything to anyone.

So anyways, in my book, score this as a W for Kyrie to move him to .500 on the week. I can only imagine what next week will bring…

And finally, basketball’s back tonight! But Baynes isn’t and Gordon probably isn’t either

For the Boston Celtics, the bad news is that Gordon Hayward twisted his right ankle (not the surgically repaired one) playing 1-on-1 with Semi Ojeleye over the All-Star break.

The good news is that Brad Stevens didn’t sound particularly concerned about Hayward’s long-term health when he was asked what happened.

“He was playing 1-on-1, twisted his ankle,” Stevens said, extremely dryly. “Semi said he made an unbelievable move and Gordon bit. Can’t bite on Semi’s moves.”

The Celtics will also be without Aron Baynes, who has been sidelined with a contusion on his foot. The Celtics are hoping to stave off future injury with Baynes, and he is expected to miss more time, including Boston’s entire three-game road swing. Stevens said Baynes is still “a ways away, at least a little bit away.”

We finally have basketball again. Hopefully we have Gordon Hayward tonight. To me, it’s less about having him to increase the odds of winning this game and it’s more about allowing him to build on his encouraging performances. It’s also a potential playoff preview, and save for Hayward’s most recent big performance against Philly, he hasn’t performed well against the league’s best (the Golden State game comes to mind). I hope we see him tonight, but questionable in the NBA often feels like doubtful in the NFL.

As for Baynes, the biggest fear is that a foot injury could lead to a stress reaction or stress fracture. Either of those could be season ending. Hopefully he’s back soon, but you get the feeling the Celtics are going to be extra cautious.