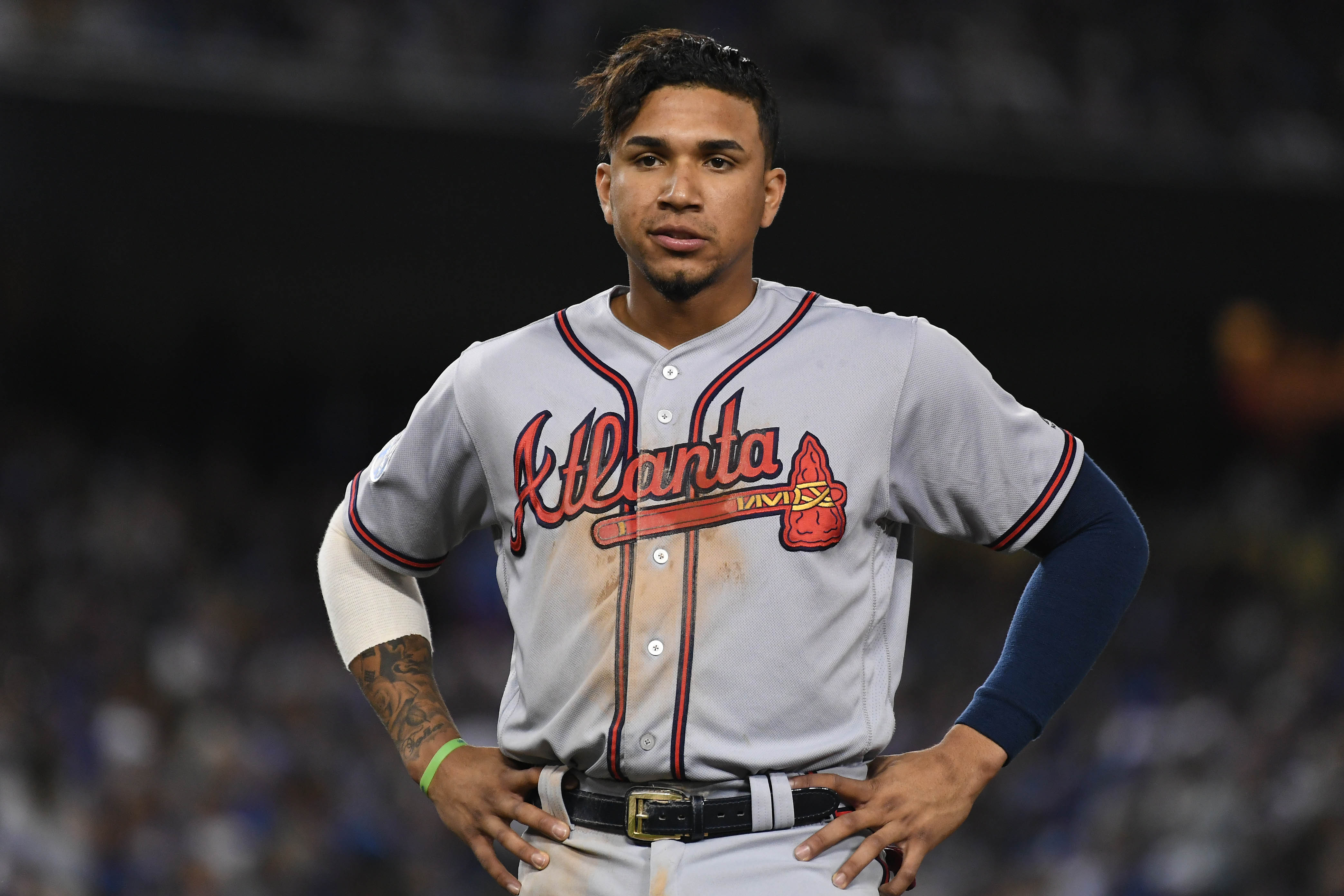 The biggest move that the Braves made this off-season was unarguably the Josh Donaldson signing. For $23 million the Braves got a potential 5 win player capable of contending for the National League MVP award. The often discussed but still underrated aspect of this signing is the versatility that it brings to the club in the form of Johan Camargo.

Camargo was a 3 win player last season spending the majority of his time playing a gold glove caliber third base. This season however, Camargo will be asked to play all over the field with the presence of Josh Donaldson in the lineup. While he has already shown the ability to play all three major infield positions in the majors, the Braves may even call on him to play some corner outfield for the team this season. He has basically never played in the grass as a member of the Braves organization, but he is athletic enough to assume that he could be passable out there in small doses.

The big question on my mind about this situation is how will Brian Snitker manage the playing time and get Camargo in the lineup? After posting a 115 wRC+ last season and 110 to this point in his young career, it is clear that Camargo needs to be in the lineup more than he’s not regardless of where he plays on the field. So where will he play and will Snitker be able to manage this situation properly?

500 plate appearances should be the baseline amount of playing time Camargo receives assuming he keeps up his previous offensive production. Now let’s lay out a path to those plate appearances. Before we start, I want to lay out a few assumptions for this exercise:

First of all Camargo isn’t going to be playing any games behind the plate. I believe we found out last season that the emergency catcher would be Charlie Culberson if something crazy happened so there doesn’t appear to be a path to Camargo getting any reps back there.

He also probably won’t play much if any first base. He may take some ground balls there in spring training in order to get a feel for the position, but I don’t see a situation where he gets any more than an inning or two at the cold corner. On days where Freddie Freeman gets a day off, Camargo will likely play third and Donaldson will play first. This would presumably also be the case even if Freeman were to go down for an extended period of time. Even if Freeman and Donaldson were injured at the same time I would expect the Braves to call up top prospect, Austin Riley, and play him at first leaving Camargo at third.

Second base will belong to Ozzie Albies as long as he continues to perform. However, Johan Camargo will be his immediate backup and should see the lion share of the playing time should Albies sustain an injury. There is also a chance that the Albies we saw at the plate in the second half last year persists. If that unfortunate situation comes to pass and Camargo is hitting, he could begin to see more playing time at the keystone. Assuming a clean bill of health for Albies and similar offensive production, Camargo should start at second base nearly every scheduled off day for Albies. If Albies starts 150 games at second, that leaves 12 off days for Camargo and presumably Charlie Culberson to cover. We’ll allocate 10 of those days to Camargo and 2 to Culberson, which essentially allows Camargo to start at second twice per month.

Camargo played the majority of his games at third base last season, but it may not be where he sees his most time this season. Of course if Josh Donaldson has another injury shortened year, Camargo would likely be the guy to step in unless they call up Austin Riley for that role. Fangraphs currently has Donaldson projected to play 133 games this year, let’s be optimistic and call it 140. That leaves 22 games between Camargo, Culberson and possibly Riley. Let’s give Camargo 16 of these starts and save 6 for some combination of Riley and Culberson. We also have to account for the 12 games that we are forcing Freddie Freeman to take off. As we said before, Donaldson would likely take those starts at first rather than Camargo, but that leaves Camargo to man third. We’ll give Camargo 10 of those starts as well and leave 2 for Culberson or Riley. We can’t forget about the Designated Hitter either. The Braves play 10 games on the road against American League teams this season. I assume that for most if not all of those games, Donaldson will DH and Camargo will play third base.

Shortstop is where things get interesting. Dansby Swanson will enter the season as the “starting” shortstop. However, he ought to be on a very short leash after his bat has yet to get going in the majors. Unless Swanson really breaks out at the plate this season, I expect Camargo to get a good bit of playing time at short. Swanson is still the better defender so look for him to continue to get the bulk of the playing time, but something like 100 games for Swanson and 60 games for Camargo doesn’t seem out of the question. This leaves 2 games for Culberson to start as well assuming a full bill of health from everyone.

Its going to take a lot of moving parts and some creativity to get Camargo much playing time in the outfield. As it stands now, the Braves outfield is pretty much set with Ronald Acuña Jr. in left, Ender Inciarte in center and Nick Markakis in right. Each of these players will likely get the bulk of the playing time at their respective positions, but they will each need to take at least 12 off days and Inciarte and Markakis could probably stand to sit against tough lefties every now and then. Let’s assume 10 additional days off for them against lefties. Assuming Adam Duvall makes the team out of camp, he should get most of the playing time when one of these players is resting or hurt. So how does Camargo get playing time in the outfield?

When Acuña sits his required 12 games there shouldn’t be a whole lot of moving around. Snitker should simply slot Duvall in for most of those games, lets call it 10. That leaves 2 games for Camargo, Culberson or possibly even Riley. While I understand the team’s desire to work Riley out in the outfield in spring training, I don’t see anything other than a nightmare scenario where they opt to actually use him much out there during the season unless his bat is just too good not to be in the lineup or he becomes a natural out in the grass. I imagine Snitker would go with the hot hand between Camargo and Culberson for those last 2 games and for this purpose we’ll assume that will be Camargo.

In the scenario we laid out above, Ender Inciarte will be sitting 22 games throughout the season. When he sits, Acuña will be taking his place in center. That leaves us an additional 22 games to fill in left field. Let’s give Duvall 16 of those games and split the remaining 6 evenly between Camargo and Culberson.

Nick Markakis is also slotted in to play 140 games this season and we will once again give Duvall 16 of the games in which Markakis does not play. While I’m unsure whether Snitker would elect to just slot Camargo and Culberson into right field for those remaining 6 games or if he would move Acuña over to right and let the utility men play left field, it doesn’t really matter for this purpose as we are just trying to find Camargo plate appearances. Regardless, this should afford both Camargo and Culberson an extra 3 starts each.

Using this delineation, Camargo will be receiving 10 starts at second base, 36 starts at third base, 60 starts at shortstop and 8 starts in the corner outfield. This puts him in position to start 114 games throughout the season, which we will assume gives him 456 plate appearances across those starts. If we assume he gets a pinch-hitting appearance in each of the 48 games that he doesn’t start, that puts him at 504 plate appearances. We did it!

If Camargo keeps hitting like he has to this point in his major league career, he absolutely deserves to hit at least 500 times for this team. The way the off-season has shaken out and with a lack of offensive productivity at the bottom of the lineup, the Braves are going to need his bat to get this much playing time. This is probably not exactly how Camargo’s playing time will work out this season due to injuries and performance issues from various players on the team, but this is a nice road map to playing time for him even if everyone stays healthy and effective.