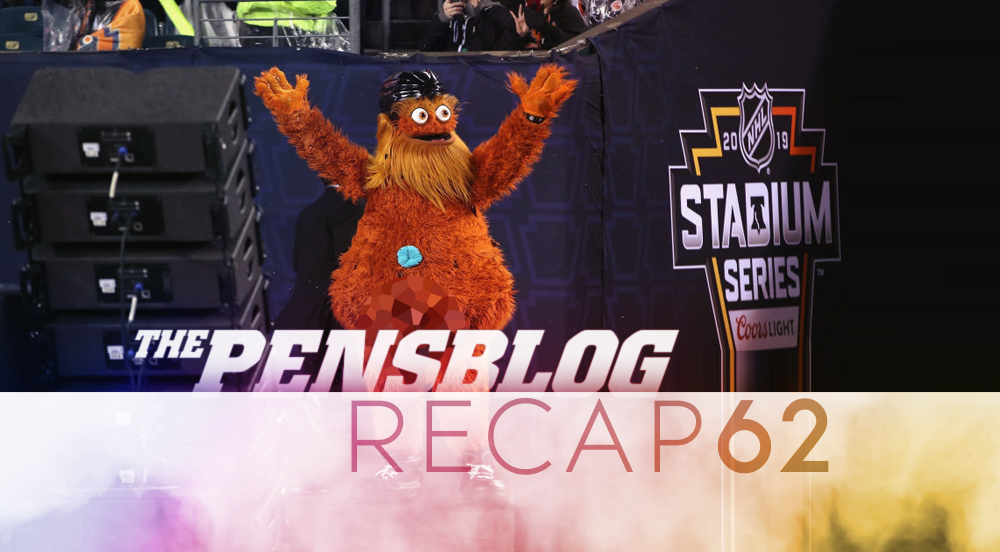 Outdoor hockey and color rush uniforms. Something that might’ve been cool 10 years ago has now gotten Gary Bettman’ attention. 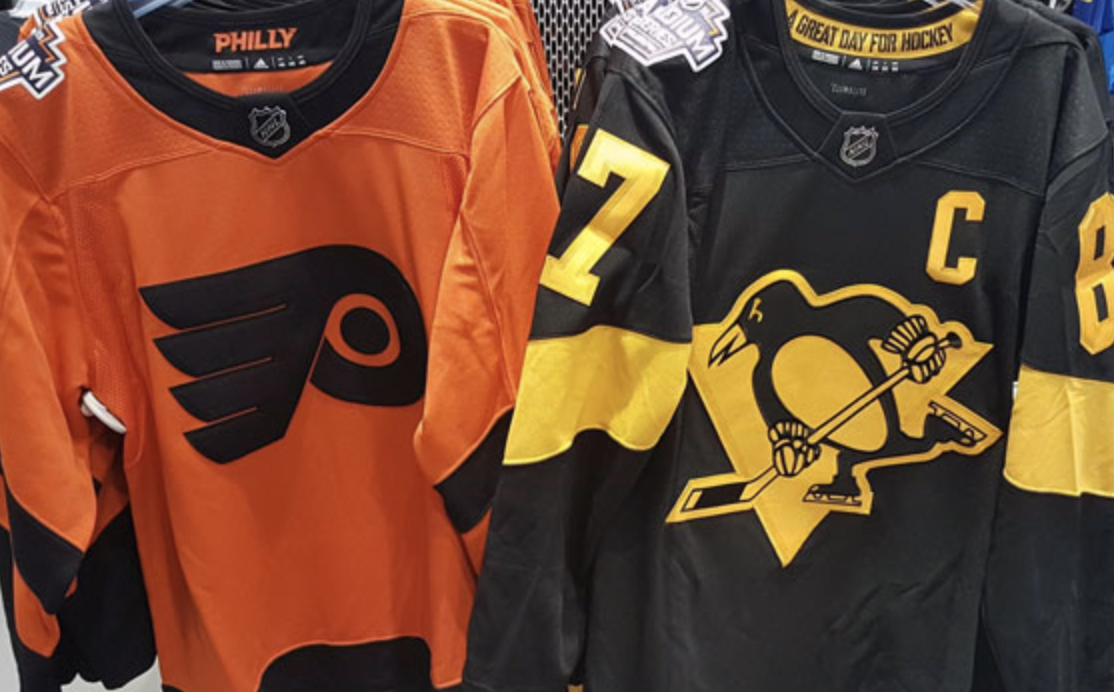 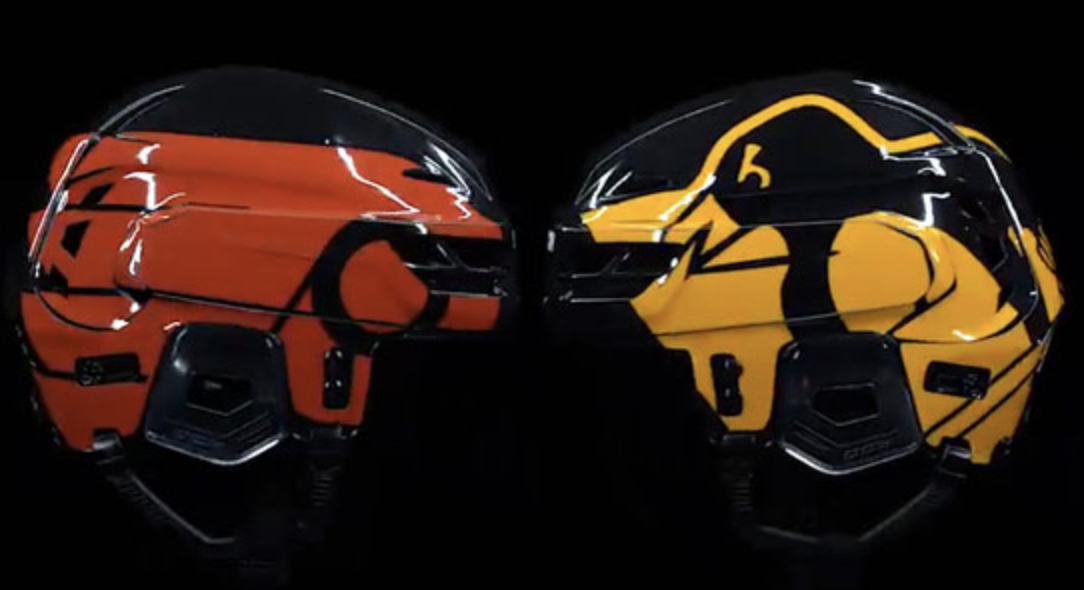 This idea is both dumb and stupid and outdoor games are losing their novelty. Thank you for your time.

Now, that that’s off my chest!

In case you’re wondering why Patric Hornqvist has been re-inserted on the top line to play with Sid and Jake, here’s why:

Hornqvist has gone 19 GP without a PPG and 15 GP without a goal. He had 0 shot attempts Thursday, the first time that's happened in his last 69 full regular season GP (also had 0 when injured Dec. 6 vs. NYI).

If these two can’t help Hornqvist, no one can at this point. I would say the Pens should look for help in a guy like Wayne Simmonds before the trade deadline, but more on that later!

As for the rest of the lineup, pretty status quo for the past few games other than Rust dropping to the 3rd line to join Bjugstad and McCann.

Murr in the cage.

Who gives a fuck?

Pens need a big two points. Let’s get to it.

Early on, as with most outdoor hockey games, this one was a giant slopfest. A slight drizzle of rain on the ice apparently means the ice becomes choppier than your local ice rink. But these guys are pro’s and not joe’s so that means it was only a matter of time until pucks would be scored.

After each team traded a few chances, daddy would eventually get the Pens on the board eight minutes into the ball game after the Flyers committed a turnover in their own zone.

Give Sidney Crosby an opportunity like this in Philly, and he’s gonna bury it 10 times out of 10. Don’t believe me? Let’s take a look at the #stats:

Fun fact: this graphic was on display before Sid’s goal so you can officially update his points total to 134.

Here’s another fun fact: this dude somehow decided it was a logical decision to pay more than 134 (we’re talkin’ dollars here) to buy this jersey:

The Pens lead wouldn’t last long as the Flyers got onto the board four minutes later.

After a turnover in the neutral zone, Oskar Lindblom would find Sean Couturier streaking into the slot who snapped a knuckle puck past Murray to tie the game at 1.

Not a whole lot Murray can do about that one. Just an absolutely perfect shot by the two front teeth missing fuckhead.

But since this was a color rush event and the game was played in a football stadium, that meant one thing and one thing only!

A few minutes after the Flyers evened the score, Brian Dumoulin would find himself the victim of a Wayne Simmonds’ shoulder, which made contact directly into his chin.

Say what you want, the game is fast, but the principle point of contact from Simmonds is directly to Dumoulin’s head.

Here's another angle of the Simmonds hit. No idea how he doesn't get kicked out of the game for this. pic.twitter.com/W5T1fb7Rde

Dumoulin would leave the game with an apparent head injury while Simmonds would served 2 minutes in the box for “unsportsmanlike conduct” lolz.

Also, it’s safe to say Simmonds is no longer on the Penguins trade deadline radar (if he even was to begin with). Let’s just hope the Department of Player Safety gives him a $5,000 fine.

Not only did the Pens start the 2nd period without Brian Dumoulin, Kris Letang, too, managed to get injured in the process of defending his teammate in the scuffle that occurred in the aftermath of the hit.

Dumoulin and Letang are not out to start the 2nd period. For now the #Pens will keep playing with four defensemen. -MC

So for those of you keeping score at home, that would leave the Pens with four defensemen. Meaning, two full periods of Johnson – Schultz and Pettersson – Ruhwedel.

Andddddd a minute into the period Johnson would get called for a questionable tripping penalty leaving the Pens shorthanded with three defensemen at their disposal. The Pens eventually killed the penalty giving up only two shots on goal in the process, which swung the momentum back in their favor for the remaining 17 minutes.

While the Flyers were putting on their best efforts to attempt to take out as many Penguins as possible with bone-crushing hits, the Philly scumbags in attendance were hooting and hollering because they’re both dumb and stupid and still think the year is 1975.

Halfway through the period, Justin Schultz took a hit of acid and came into the Flyers zone taking two consecutive shots and putting the Pens back up a goal.

Justin Schultz made it count in the end. #StadiumSeries pic.twitter.com/oQg0hj9Goq

As for the remaining ten minutes:

Entering the final 20 of play, Letang would remain in the dressing room leaving the Pens to play another period with only 4 defensemen.

With the Pens still thwarting off the Flyers chances early, the good guys would get an insurance cushion six and a half minutes in as Phil fed Geno trailing him in the offensive zone for the one-time blast bouncing up and over Elliott and into the net.

Not even Carter Fart would’ve stopped that seeing eye missile.

When you have no fucking clue where the puck is pic.twitter.com/PJUypUso2E

While it looked the Pens had this one all but wrapped up, the refs decided to call Matt Cullen off for quite possibly the weakest slashing call in the history of slashing calls with a little less than five minutes remaining. On the ensuing power play, Philly would ultimately pull Elliott creating a 6-on-4 advantage and capitalizing in the process.

The @NHLFlyers and the city of Philadelphia are ALIVE!!!

We've got a one goal game.

At this point, not even Sullivan calling a coach’s challenge for phantom goalie interference and Matt Murray going to the bench to dry his equipment between plays could help put air back into the lungs of the Penguins. The losses of Letang and Dumoulin were starting to become very apparent in terms of an energy perspective and the Penguins just couldn’t keep the puck out of their own zone.

With under :20 to play, the Flyers would capitalize yet again with Elliott pulled. An offensive zone faceoff win by Couturier directed the puck towards the half wall where Voracek came barreling over to throw a puck on net and in between the legs of Murray to tie the game before the end of regulation.

The second line of Phil, Geno, and Johnson crafted a couple of grade A opportunities about a minute in, but after Phil got denied on a pair of wristers, you just knew how this thing was gonna end.

No idea what this means, but it ain’t good.

Don’t drink the bleach yet.