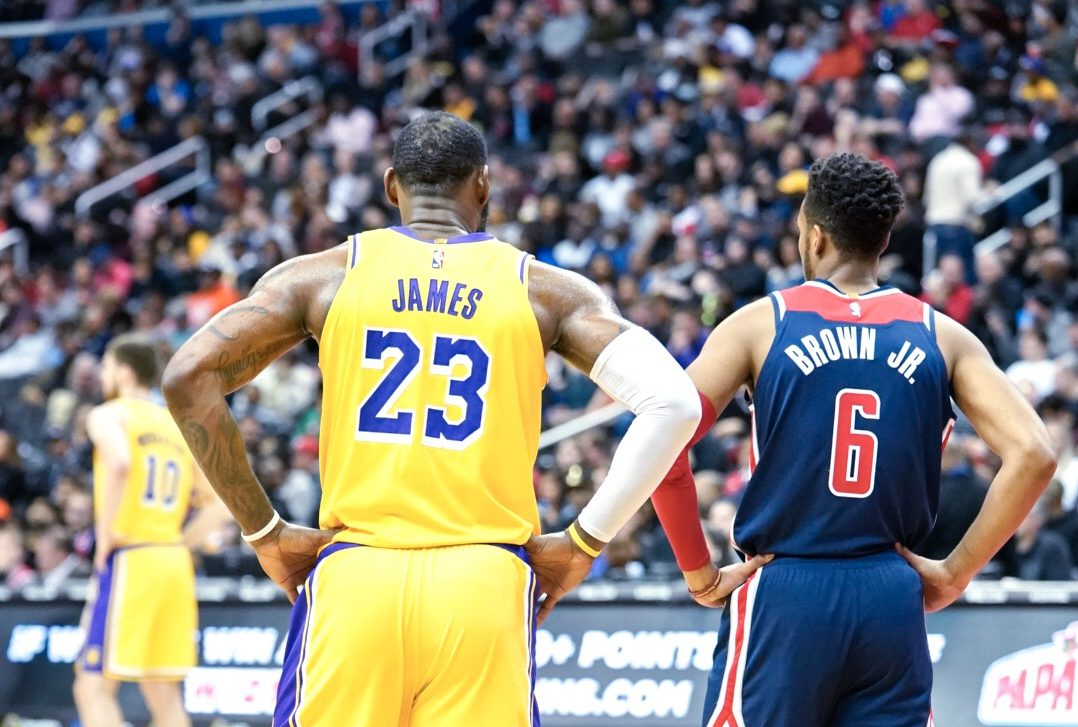 When the Washington Wizards drafted Troy Brown Jr. with the No. 15 overall pick last summer, they raved about his maturity and versatility. Much of this stemmed from Brown’s pre-draft workout with the team 10 days earlier where he matched up against No. 16 overall pick Zhaire Smith and impressed the organization with his high basketball intelligence. The confidence and swagger Brown put on display helped the cause, too.

“I know I worked my tail off to get to where I was,” Brown reminisced on Friday about his comfort level to speak with team president Ernie Grunfeld shirtless after his workout. “Coming out of college, there was a lot of talk going on whether or not I was going to be drafted first round. I know I had put in the work in my offseason. I was ready to go so I was confident in my conditioning, my shape, and my game.”

Oregon's Troy Brown on what gives him the confidence to talk to Ernie Grunfeld shirtless at the end of a workout: "If you know who you are and you know you prepared for these situations, you've given everything you had, there's no reason for you not to be confident." pic.twitter.com/MDmiouZYdG

To start the season, there was a clear starter and backup at the three positions Brown had a chance to crack the rotation at small forward, shooting guard, and point guard. Otto Porter Jr., Kelly Oubre Jr., Bradley Beal, Austin Rivers, John Wall, and Tomas Satoransky were going to eat up all 144 minutes of available playing time most games. That did not stop Brown from proving himself during training camp in late September.

“I’m going to come in and compete and work for my spot,” Brown said about his mindset to begin his rookie season. “Training camp went really well for me, I played really well. I was really confident with everything going on. I feel like I did a really good job in training camp showing that I wasn’t just a rookie and I could compete with everybody.”

A lot has changed with Washington’s roster construction since training camp. Porter, Oubre, and Rivers were all traded away and Wall has missed the majority of the season with a devastating heel injury. Despite scarce minutes the first couple months, Brown thought the December trade for Trevor Ariza would open up an opportunity for him. That was not the case and it was a humbling experience for Brown. Learning the lesson not to get hopes up was partially imparted on him by veteran Jeff Green who shares a locker next to Brown at Capital One Arena.

“When Kelly [Oubre] and Austin [Rivers] left, I feel like that was an opportunity for me,” Brown explained. “The minutes didn’t really go my way. Otto was out, too. At this point I’m just very level headed about it, I just kind of play my game and do what I do and just try to stay focused. You never want to get too high or too low because that’s when you set your expectations a little bit too high and you end up being disappointed.”

Brown has played just 212 minutes in the NBA this season across 30 games this season, the fewest among the top 17 draft picks barring injury (Michael Porter and Zhaire Smith). Over half of the 60-man draft class, 31, have played more minutes in their rookie seasons than Brown as of February 25. In limited opportunities, Brown has played reasonably well and could serve as a decent option at backup small forward, shooting guard, and point guard right now. Wesley Johnson, an overplayed Beal (because his backup is hamstrung Jordan McRae), and Chasson Randle are below average options that Scott Brooks gives consistent playing time to. Despite improved playmaking ability during the course of the season, the 19-year old cannot crack the Wizards’ rotation consistently.

“A guy like Troy, he’s been asked to play the point guard spot a lot more for us so as a coach, I have to be a little bit more patient with him,” Capital City Go-Go head coach Jarell Christian said. “I have to let him know that he has to be patient with himself. I know he wants to perform at a high level, but he’s playing at a different position than he’s used to playing, but I thought he did a heck of a job tonight. Getting his teammates the ball and playing defense.”

Instead of developing and playing through rookie mistakes while playing with the Wizards, Brown has been sent down to the Go-Go several times to play with the G League team. It is not necessarily a bad thing every once in a while if he is not going to to be playing in a given game for Washington, but holding him back in the rotation behind guys who will not be here years down the road is illogical. Whether that is solely on Brooks, Grunfeld, others in the organization, or a combination of all three, there is enough blame to go around.

In 10 games for the Go-Go, Brown has averaged 17.4 points on 49 percent shooting including 37 percent from deep, 6.8 rebounds, 3.9 assists, and 1.5 steals in 33.9 minutes per game. The first-round pick has played significantly more minutes in the G League, 339, this season than in the NBA, 212. Despite the hope that the two teams would have seamless transitions from one another for players going back and forth, Brown shared that it is not as easy as you would think.

“It’s actually pretty hard just because the style of play is actually different,” Brown explained. “At Go-Go we get up and down a lot more. On the Wizards my role is a lot smaller whereas on the Go-Go I’m one of the leaders and telling people want to do and making plays like game-winning shots.”

That game-winning shot he is speaking of was a clutch three-pointer at the end of the shot clock on Friday against the Greensboro Swarm. The Go-Go were down one and unable to run their set play for McRae with time winding down in regulation. Even though Brown struggled with his three-point shot in college, he calm and collectedly drained his third deep ball of the game for the eventual game-winner.

“I knew it was going in as soon as it left my hand,” Brown proclaimed the next day. “It came to me and four seconds left [on the shot clock] so at that point, I was thinking either go to the basket to go up one or I shoot the three to go up two. Then it was only three seconds so I rhythmed it out and shot the three.”

Despite the heroics last Friday, Brown was hoping to do that for the Wizards and not the Go-Go in his first season as a professional.

“Personally, no,” Brown responded when asked if he expected to see such little NBA playing time. “I thought with how training camp went, I was going to have a bigger role.”