Recap: Being at home can’t save the Celtics as they lose to Blazers, 97-92 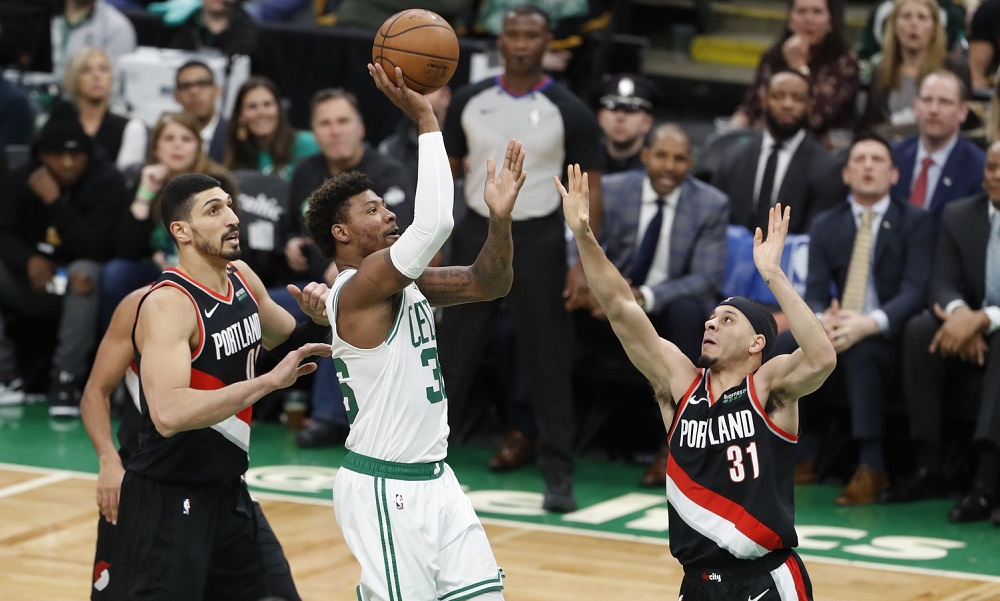 Recap: Being at home can’t save the Celtics as they lose to Blazers, 97-92

The Celtics were back home after a terrible three-game road trip, but still suffered their season-worst fourth straight loss, 97-92, to the Trail Blazers.

There’s no shame in losing to Portland, which now has a five-game winning streak and is 18-4 vs. the East. However, the Celtics really needed a morale-boosting win, and they couldn’t get it.

Neither team shot well, but missing too many cost the Celtics more than the Blazers. Boston was 40-86 for an okay 46.5%, but they were abysmal from the arc (5-28, 17.9%) and simply couldn’t get to the free throw line (only 7-10 compared to Portland’s 15-20, which had Tommy grumbling all night). The Celts also turned the ball over 17 times, leading to a damaging 24 points for the Blazers.

After a close first half, the turning point was a 12-2 Portland run early in the third quarter. As the Blazers opened up a nine-point lead, Brad Stevens Would Not Call A Timeout. This has officially become a problem. The Blazers rode their momentum into the fourth quarter, up 74-64, and never trailed again.

There were no changes in the starting lineup. Terry Rozier missed the game with a knee problem. Brad used only eight men and at times went without any bigs.

After making only three of their first 10 shots, the Celtics regrouped and finished the first period 11 of 21, trailing just 25-24 at the buzzer. Irving and Horford played all 12 minutes and scored 11 and seven, respectively.

The second quarter wasn’t smooth (see below), but was much better than the last two games. Celts were hustling, scrapping and diving on the floor for loose balls. They trailed 43-42 at halftime.

Early in the fourth, Marcus Smart looked like he’d had enough of losing. He upped the intensity with a steal, a forced 8-second violation, and two layups to lead an 8-0 run that gave Boston life. The Cobra scored 11 in the fourth and almost led the Cs all the way back.

Boston did their worst shooting in the second quarter. The Celts made just 8-23 (0-8 on threes) and suffered a scoreless drought of almost five minutes. They also weren’t getting calls – their first made free throw of the game came 21.8 seconds before halftime.

The Celts’ defense relaxed in the third, as they allowed 31 points. Dame Lillard got hot in the quarter, scoring 15 on his way to a game-high 33.

Mook Morris was 0-6 from downtown and scored only eight points.

Daniel Theis had possibly his worst game ever in green: 0-5 shooting, 0 points, 0 rebounds and helpless on defense.

On his special night, Al had 13 points, five boards, five assists, but was only 1-7 from deep.

Be one of the first 5️⃣0️⃣0️⃣0️⃣ fans in tonight to get your Horford bobblehead courtesy of @TDBank_US pic.twitter.com/iNjadWbh7F

Rappers Jadakiss and Millyz were in the wrong place at the wrong time.

.@Therealkiss just poured his beer on @MILLYZ. No word on if they're still friends 😭 pic.twitter.com/7ds2vq521x

Tatum picks off the pass and finishes at the rim! pic.twitter.com/V6N9dGprwW

Jaylen Brown hammers it home after leaving the defense in the dust! pic.twitter.com/wFYOh0M1Pe

Marcus Smart doing what he does. pic.twitter.com/Jh5zp8BIEO

Marcus Smart makes an impact down the stretch! pic.twitter.com/8aR5DLXBLK